The NVIDIA RTX A6000 is the company’s newest release that leverages second-generation RTX architecture. Coupling 10,752 CUDA processing cores with its 84 next-generation RT cores, the new GPU offers top-class performance in both real-time ray-tracing and professional final frame ray-tracing output. Though NVIDIA considers the RTX A6000 as a successor to the RTX 6000, it is essentially a direct replacement of the RTX 8000.

The NVIDIA RTX A6000 is the company’s newest release that leverages second-generation RTX architecture. Coupling 10,752 CUDA processing cores with its 84 next-generation RT cores, the new GPU offers top-class performance in both real-time ray-tracing and professional final frame ray-tracing output. Though NVIDIA considers the RTX A6000 as a successor to the RTX 6000, it is essentially a direct replacement of the RTX 8000.

The RTX 8000 is roughly 3 years old as of this review, so it’s certainly nice to finally see a replacement to NVIDIA’s former best-of-class workstation GPU. The company recently stopped using the Quadro name to identify their professional solutions; however, the RTX A6000 still features all the same professional features, hardware and software certifications, certified drivers as the Quadro line. 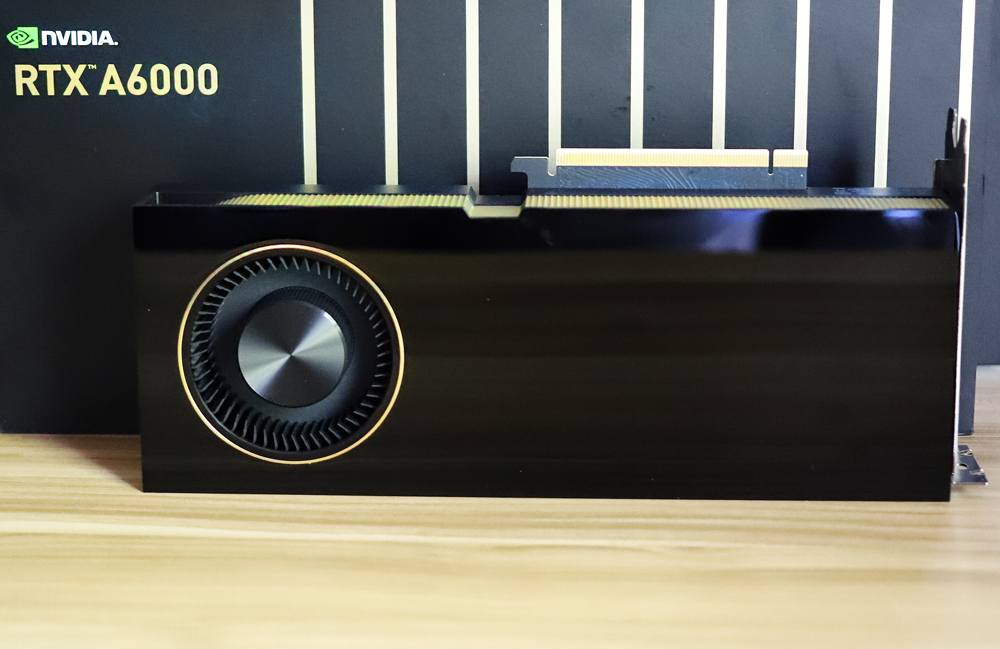 The RTX A6000 is a huge upgrade no matter which last-gen card you compare it to, offering a more realistic output of moving objects and support for hardware-accelerated motion blur (the latter which is used to improve the final image’s overall realism when rendering moving objects). It also features accelerated AI denoising, which means higher quality output using fewer rendering passes and thus faster render times.  Moreover, the A6000 is NVIDIA’s first professional graphics card that supports the PCIe Gen4 standard.

The new NVIDIA card doubles the memory size of the RTX 6000 to 48GB of GDDR6 (the same as the RTX 8000), allowing it to work with larger 3D datasets. This also means creative professionals can render large 3D scenes without having to reduce scene complexity. For professionals that have larger budgets and workloads that require more than 48GB of memory, two A6000 cards can be connected via the NVIDIA NVLink for 96GB of combined GPU memory. 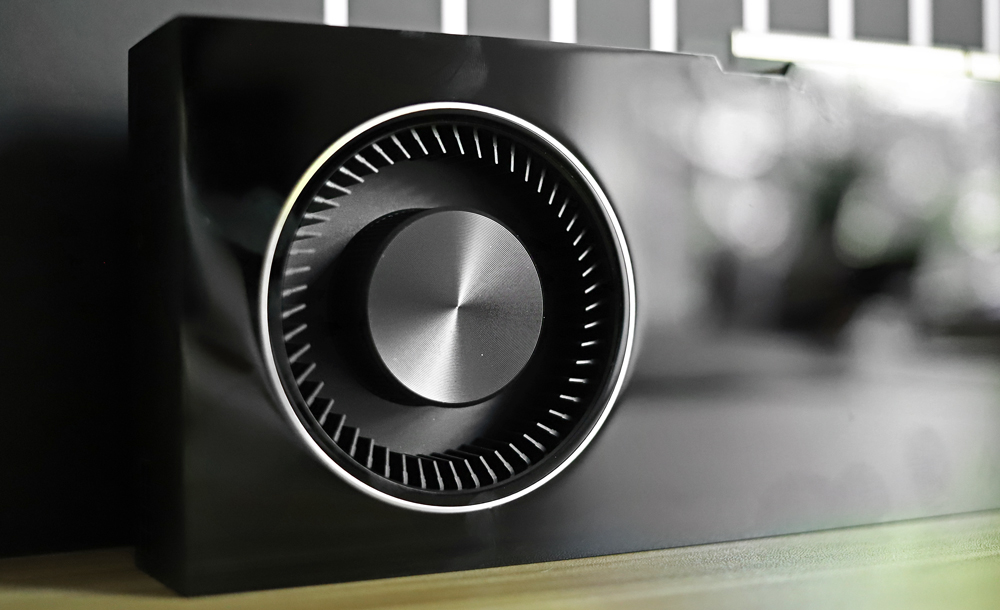 Perhaps the most significant upgrade with the RTX A6000 is NVIDIA Ampere, a new architecture that uses Samsung’s 8nm NVIDIA custom process featuring 28 billion transistors. As you will see in the performance charts below, this new architecture will blow the RTX 6000 out of the water in most of our tests.

Other Ampere highlights include:

The Ampere architecture also increases CUDA cores by up to double the single-precision floating-point compared to last-gen models. This means noticeable performance improvements in areas such as 3D model development and compute like desktop simulation for computer-aided engineering.

Yes, the RTX A6000 is a direct replacement of the RTX 8000 and technically the successor to the RTX 6000, but it is actually more in line with the RTX 3090 in many ways, as far as specifications and potential performance output go. Both cards leverage the new Ampere (8nm) architecture and feature a similar CUDA and RT core count.

Any difference in performance between the two cards is likely due to the RTX 3090’s improved driver optimization and newer RAM (3090’s GDDR6X vs the A6000’s GDDR6). Nonetheless, the RTX A6000 is a massive release by NVIDIA and will outperform pretty much anything else available on the market in certain areas, so deciding on which card is best for you really comes down to your specific use case as our review benchmarks will show.

To gauge its performance, we put the RTX A6000 through a series of resource-intensive tests and compared it to the RTX 8000 and the RTX 3090 FE. We installed the RTX A6000 in both the HP ZCentral 4R and the P620 workstations, which the RTX 8000 also used in some of our benchmarks:

We installed the RTX 8000 and RTX 3090 in a custom consumer-build for our Blender and LuxMark tests:

For this benchmark, the RTX A6000 showed a dramatic improvement over the last-gen model inside both workstations, especially in the Siemens NX category. As we stated earlier, the Ampere architecture is a huge leap forward in performance, so this was certainly expected and you will see this performance trend continue in the rest of our benchmarks.

Overall, we saw another significant leap in performance with most of the categories when installed inside the P620, sometimes more than doubling the result over the RTX 8000. When populated inside the HP ZCentral workstation, it showed lower numbers with the exception of the GPU Compute.

Next up is the ubiquitous Blender, an open-source 3D modeling application. This benchmark was run using the Blender Benchmark utility. NVIDIA OptiX was the chosen render method, as opposed to CUDA, as the A6000 and its comparables can utilize RTX. In this benchmark measured in seconds, lower is better.

The A6000 showed huge gains in all categories (except Koro) over the RTX 8000 in both the HP and Lenovo workstation. Though it trailed the RTX 3090 in all categories, the RTX A6000 gave the gaming-behemoth GPU a run for its money. 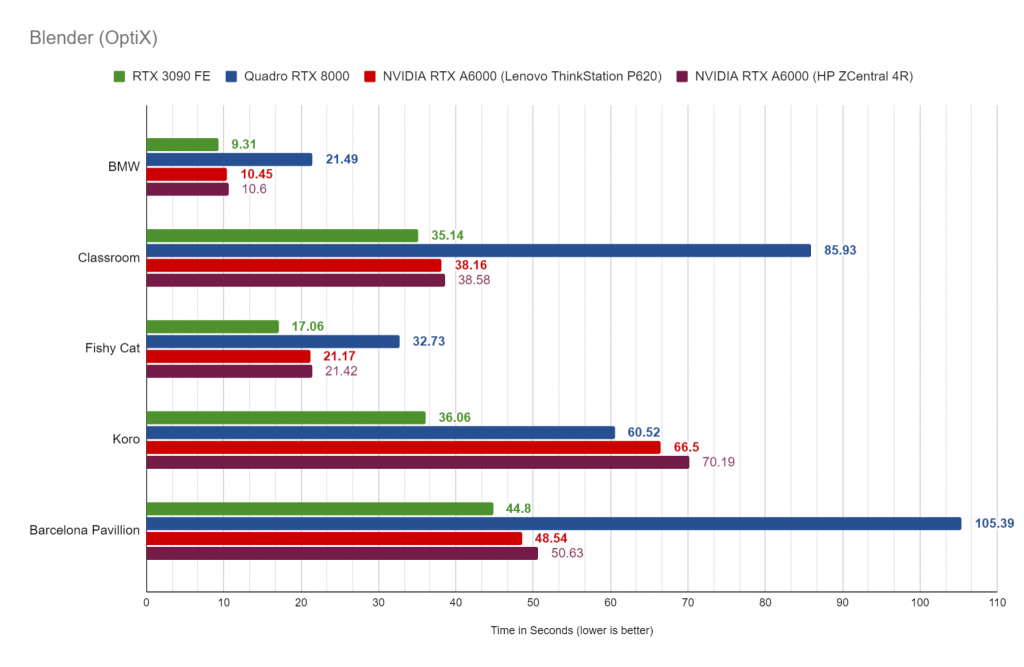 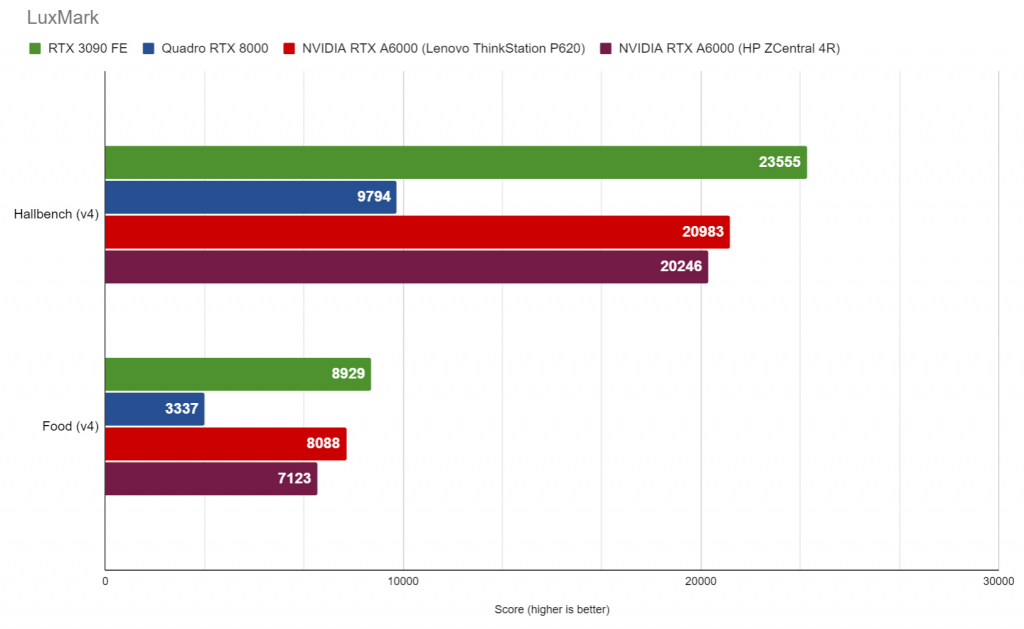 The RTX A6000 is an impressive release by NVIDIA, to say the least. This new professional graphics card features 10,752 CUDA processing cores, 84 next-generation RT cores, 48GB of GDDR6 RAM, and supports the PCI Express 4.0 x16 interface. The new NVIDIA card doubles the GPU memory size of the RTX 6000 to 48GB GDDR6, allowing it to work with larger and more complex 3D datasets. Professionals who have bigger pockets and need more than 48GB of memory can install two A6000 cards via the NVIDIA NVLink for a combined 96GB of DDR6 RAM.

While the RTX A6000 is technically the successor to the RTX 6000, it’s more of a direct replacement of the RTX 8000–NVIDIA’s former top workstation GPU. And even then, it’s exponentially more than just an iterative upgrade vs this last-gen model: it’s a monumental leap in performance. 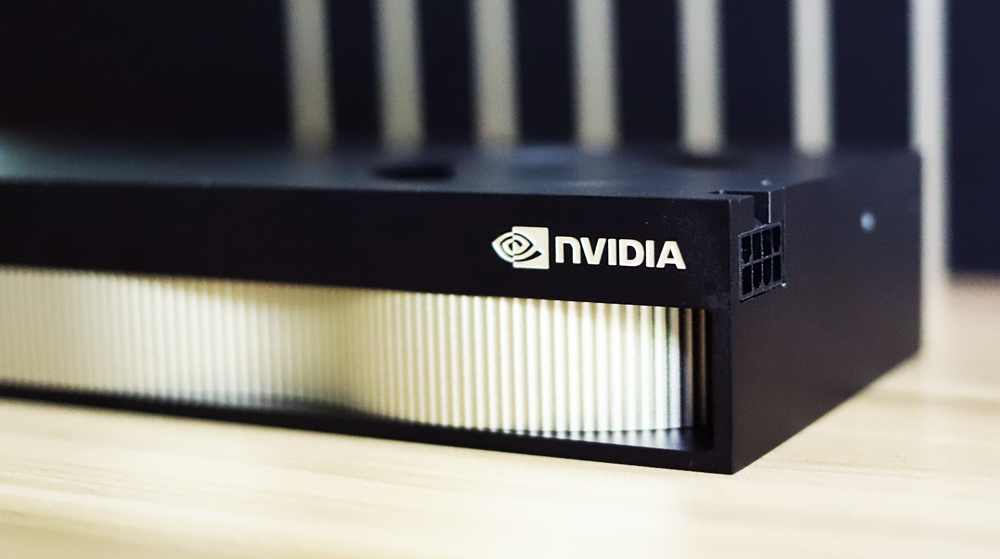 So how is the possible? The most important factor is NVIDIA Ampere. This architecture uses Samsung’s 8nm NVIDIA custom process (featuring 28 billion transistors), an improved streaming multiprocessor, second-generation Ray Tracing cores, and greatly improved ray tracing hardware acceleration. It also uses third-generation Tensor Cores, which helps to improve AI inference performance and DLSS resulting in better performance at higher resolutions. These are just a few of the highlights Ampere brings to the table and thus allows the RTX A8000 to offer a huge leap forward, which was certainly evident in our performance tests.

Another interesting feature for those who have the means to do it (and necessity) is the RTX A6000’s support for the Quadro Sync II add-in card. This allows the GPU to synchronize both the display and image output from various compatible GPUs within a single system (or a cluster of systems), as each Quadro Sync II card can synchronize the output of up to four RTX A6000 cards. That is, users can install up to two Quadro Sync II cards on a single system, which means a workstation with eight GPUs (each with four active independent display outputs) has the ability to support up to 32 synchronized video displays.

Even though the RTX A6000 is a replacement to the RTX 8000, it is actually more comparable to the RTX 3090, where it trailed ever so slightly in our benchmark tests. As we mentioned earlier, this minor performance difference is likely because of Quadro driver optimizations and newer RAM. 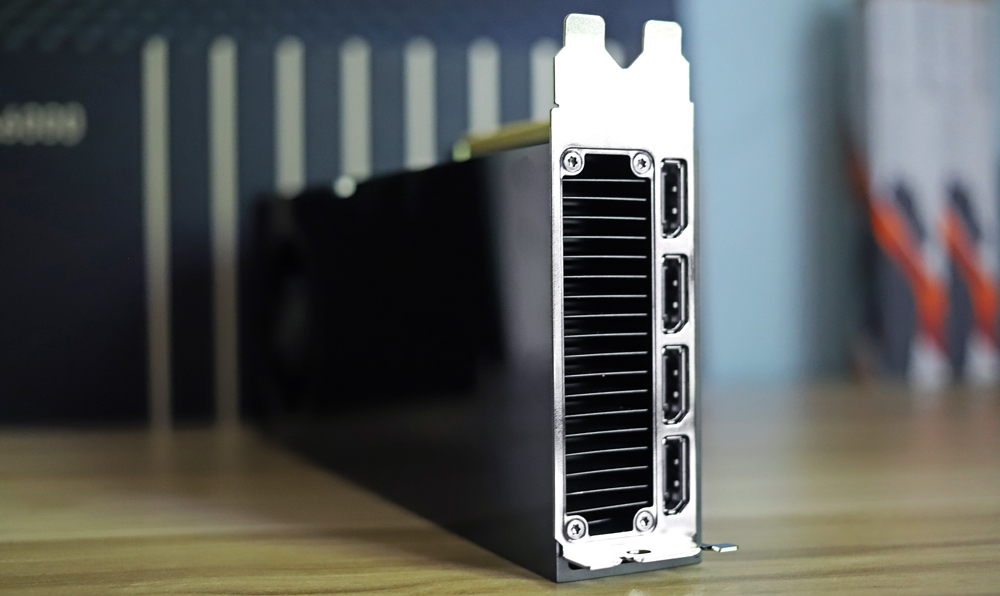 So, who is the RTX A6000 meant for and should I buy an RTX 3090 instead? Well, it depends. Deciding which GPU to get should be based on whatever your workflow is or what it might be in the short-term future. It’s incredibly hard to get a hold of any RTX card these days, but if you are in a position to do so, the RTX A6000 best suits those who work primarily in CAD (more specifically, in scientific fields with applications like Creo and CATIA), as the RTX 3090 doesn’t provide the necessary driver optimizations that come with the Quadro line of cards. Though we did not test the RTX A6000 in any game experience benchmarks, the RTX 3090 is certainly the best gaming GPU money can buy, especially with games that leverage ray-tracing and DLSS 2.0.

With all this said, the Ampere-based RTX A6000 will greatly outperform pretty much anything else available on the market in certain areas, so if you’re a professional that needs a powerful visual-computing GPU for your desktop workstation, the RTX A6000 is the best card available right now.