Towards the end of 2020, Synology added the DiskStation DS920+ to their lineup of NAS devices. The DS920+ leans to the smaller size of a NAS and offers a robust solution to streamline data and productivity within the environment that it is placed in. The DS920+ offers four bays, while also featuring two built-in M.2 slots allowing the device to take advantage of the Synology SSD Cache functionality.

Towards the end of 2020, Synology added the DiskStation DS920+ to their lineup of NAS devices. The DS920+ leans to the smaller size of a NAS and offers a robust solution to streamline data and productivity within the environment that it is placed in. The DS920+ offers four bays, while also featuring two built-in M.2 slots allowing the device to take advantage of the Synology SSD Cache functionality. 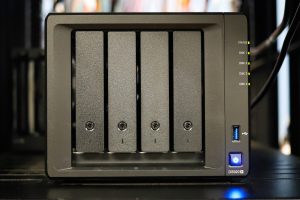 As we have stated in other NAS reviews, with what happened in 2020, along with more people working from home, there was a need for mass amounts of data that people needed to access or even save too. Since cloud service can only bring people so far before having to pay monthly or get in the hassle of using another service, NAS became a viable option when it came to storing and accessing data. 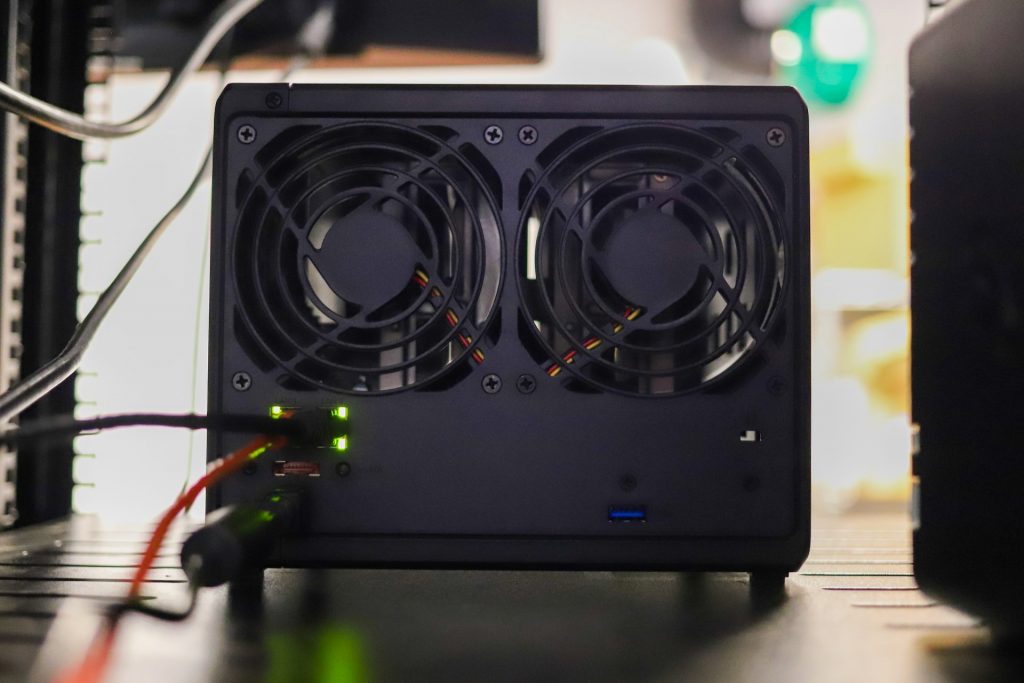 This Synology DiskStation proves to be a very good option when it comes to a consumer-grade NAS. With four drive bays, supporting up to 100TB (9 total 3.5″ bays with expansion unit) for maximum single volume size and easy to use Windows-like OS, it doesn’t come as a surprise when people and small businesses alike select Synology NAS.

As with all Synology NAS, the DiskStation DS920+ is powered by the Synology DiskStation Manager (DSM). With this device manager, it allows for a range of uses including, complete multimedia management, streaming, and playback; it allows for various types of backups, a virtual machine manager, or even a surveillance station. 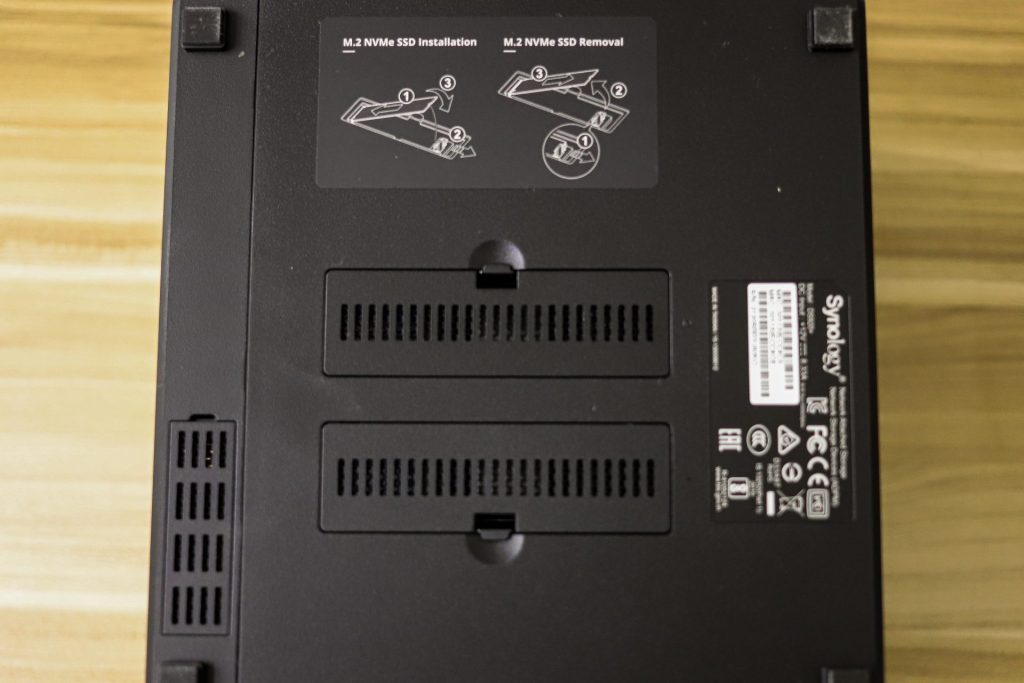 The DS920+ was designed for reasonably good performance from a NAS, it is equipped with an Intel Celeron J4125 4-core CPU and 4GB of DDR4 RAM that can even be expanded up to 8GB. 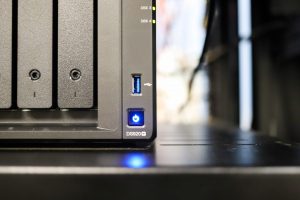 The Synology DiskStation DS920+ is a smaller NAS, which as stated before, has four front drive bays. The four 3.5” drive bays take up almost all of the front of the NAS, with the power button, one USB 3.0 port, and LED indicators being on the right side of the device. Each side of the NAS has the vented-word “Synology” on it.

When looking at the rear of the unit, it has two fans, along with two 1GbE RJ-45 ports, reset button, eSATA port, power port, another USB 3.0 port, and the Kensington Security Slot. The M.2 NVMe bays are located under the NAS and are able to be used for cache only. Synology doesn’t allow the NVMe drives to be used for their own flash volume or a flash tier. 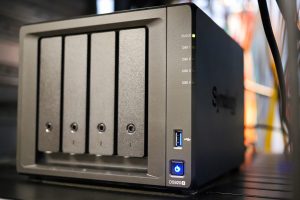 Compared to the fixed 16 thread, 16 queue max workload we performed in the 100% 4K write test, our mixed workload profiles scale the performance across a wide range of thread/queue combinations. In these tests, we span workload intensity from 2 thread/2 queue up to 16 thread/16 queues. In throughput, the DS920+ was fairly flat in SMB starting at 345 IOPS and ending at 376 IOPS. There was a big improvement from beginning to end in iSCSI with a start of 554 IOPS and an end at 1,294 IOPS. 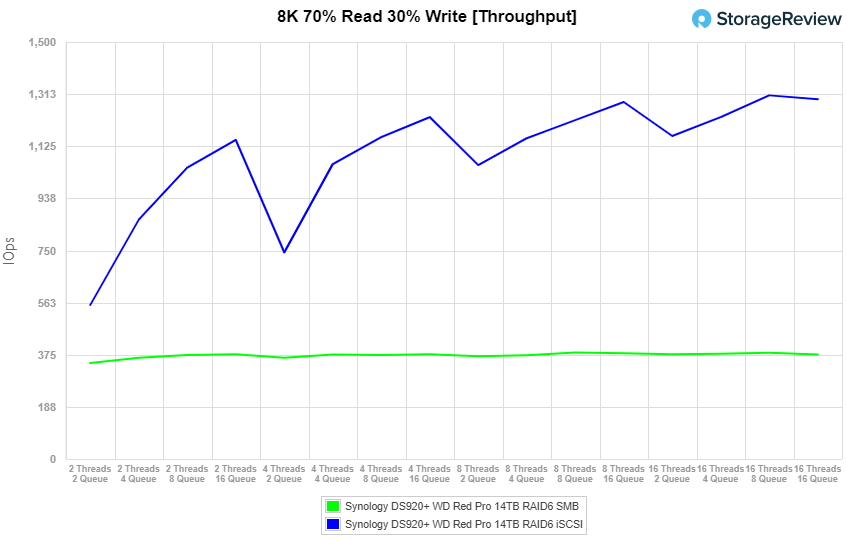 For 8K 70/30 average latency, the SMB configuration started at 12ms and spiked up to 680ms at the end. The iSCSI started at 7ms and finished at a much milder 197ms. 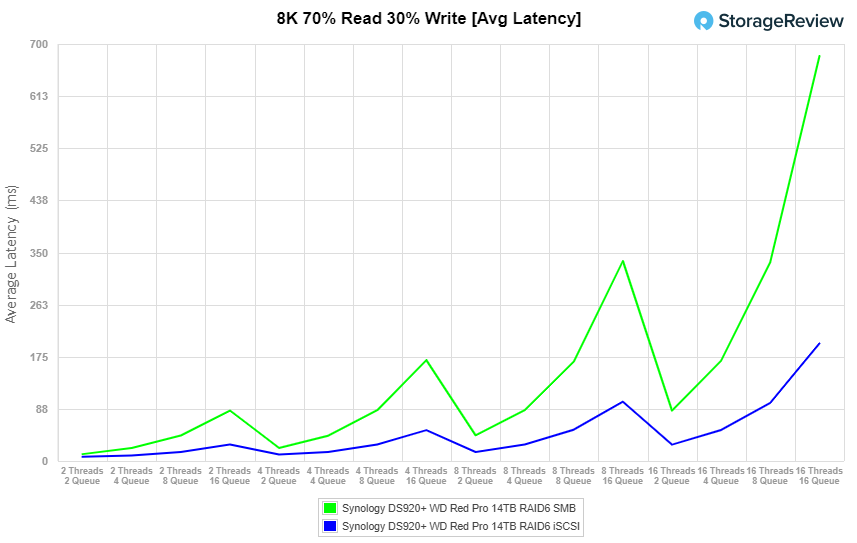 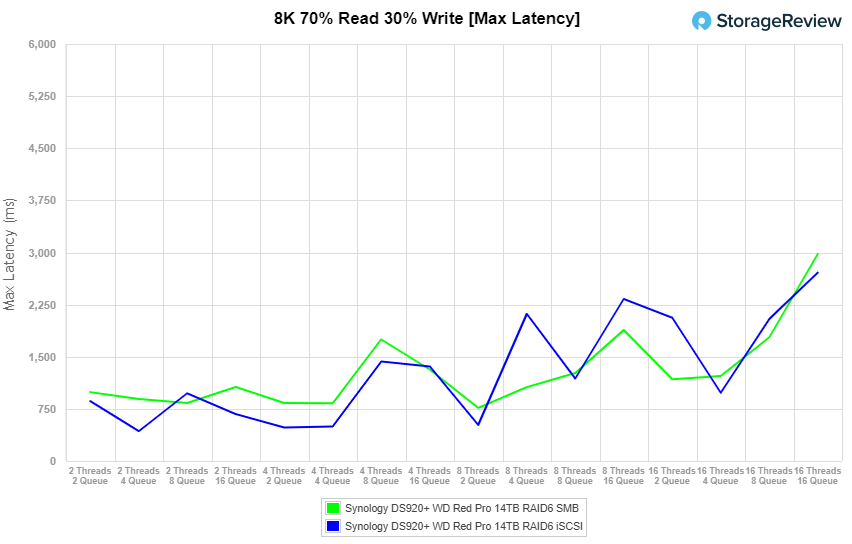 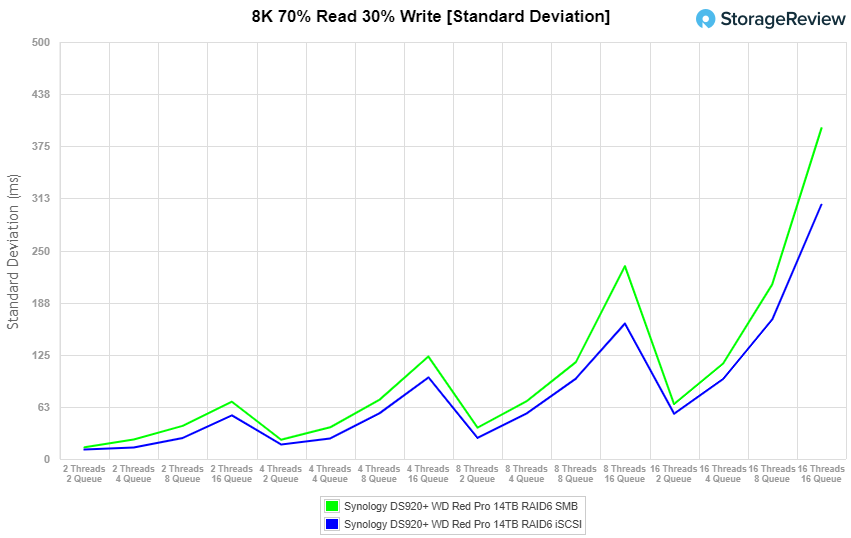 The Synology DiskStation DS920+ is a midsize NAS that is all about optimizing performance, and productivity. With the built-in M.2 SSD slots, using the Synology SSD Cache technology, it allows anyone to boost system I/O and application performance. The DS920+ leverages the Intel Celeron J4125 quad-core processor and up to 8GB of DDR4 RAM. There are four internal 3.5-inch storage bays, allowing a capacity up to 100TB with an added expansion unit, along with two USB 3.2 Gen 1 ports to expand to even more capacity. 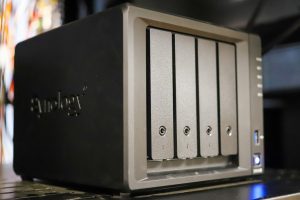 This NAS was designed for a blend of performance, capacity, and cost. It performed decently well, especially for the form factor and connectivity. The DS920+ would be perfect for any small home/office setup or even a small business. It’s also nice to see the M.2 slots go NVMe, although in this case we’re limited by the Gigabit connectivity. Directionally though, it’s a harbinger of what’s to come as Synology updates its portfolio.