The NVIDIA RTX A4000 is part of the company’s latest desktop professional GPU lineup meant for desktop workstations that need high-performance for real-time ray tracing, AI-accelerated compute, and high-performance graphics. Leveraging the second-generation RTX architecture, NVIDIA claims that the A4000 is the most powerful single-slot GPU available on the market for professionals.

The NVIDIA RTX A4000 is part of the company’s latest desktop professional GPU lineup meant for desktop workstations that need high-performance for real-time ray tracing, AI-accelerated compute, and high-performance graphics. Leveraging the second-generation RTX architecture, NVIDIA claims that the A4000 is the most powerful single-slot GPU available on the market for professionals. 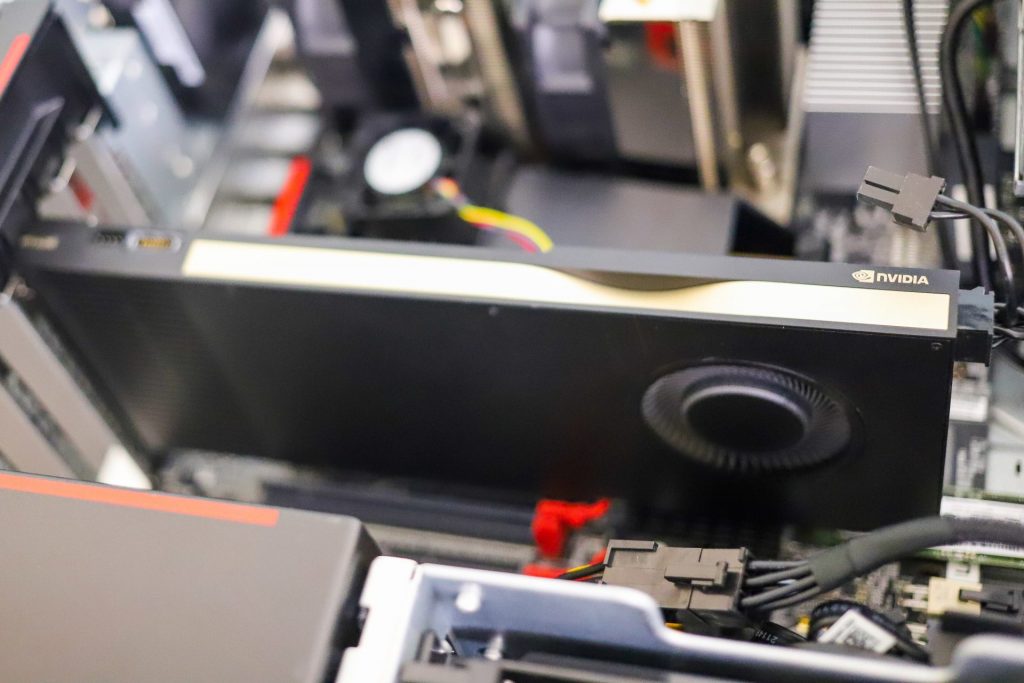 The A4000 sits right behind the RTX A5000 and RTX A6000 in NVIDIA’s new line of professional RTX cards, featuring 48 RT Cores (2nd gen), 192 third-generation Tensor Cores, and 6,144 CUDA cores with 16 GB of graphics memory. While NVIDIA dropped the Quadro name to distinguish their professional line, the RTX A4000 still features the same professional features, hardware and software certifications, certified drivers as the Quadro line was known for. 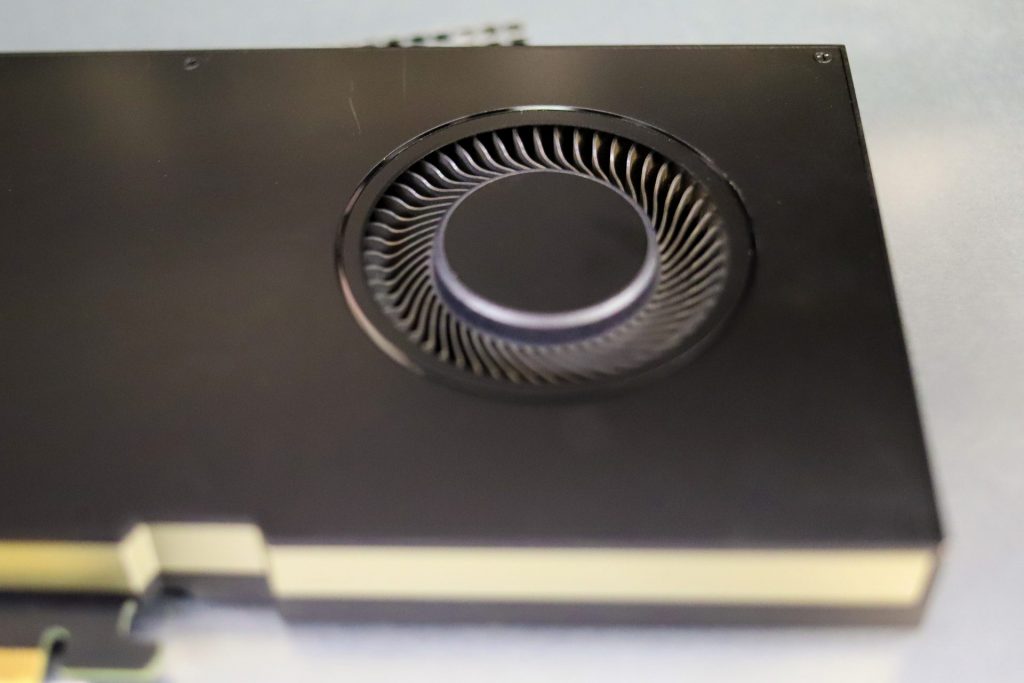 For connectivity, the 4.4” height x 9.5”  length  A4000 features four DisplayPort 1.4a ports and the usual 1x 6-pin PCIe power port. Ventilation runs along the top of each of the DisplayPorts and on the front side of the card, while a smaller fan resides on the opposite side. 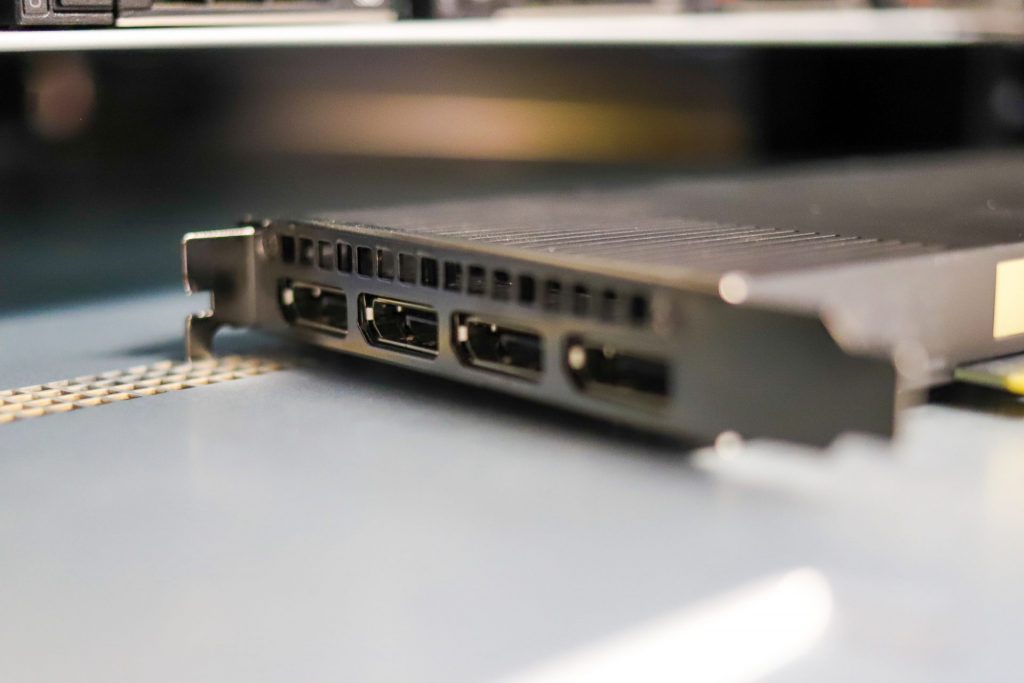 NVIDIA considers the RTX A4000 as a successor to the Quadro RTX 4000, an aging card that’s a few years old at the time of this review.  In our review from 2019, the RTX 4000 posted some very impressive performance for an entry-level card, making it a great addition to the company’s impressive portfolio while carrying a price tag of roughly just $900 when it was released. That said, with the advancements NVIDIA has recently made in their GPU architecture, we’re always excited to see what they have in store for their workstation-class cards. 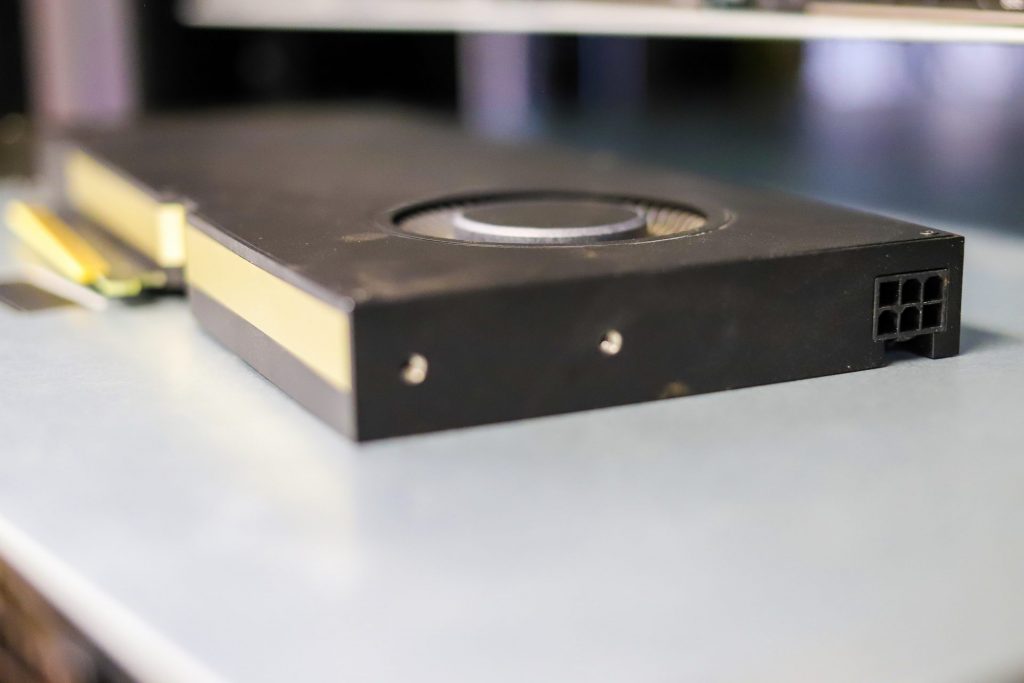 Right away you will see that the A4000 doubles the GPU memory of the Quadro card to 16GB and while almost tripling the CUDA core count. Coupling this with a slight increase in memory bandwidth (448GB/s), the new A4000 is already looking significantly better. These specs make it more in line with the RTX 3070, NVIDIA’s high-performance desktop consumer card.

As we mentioned in our RTX A6000 review, the most significant upgrade to the company’s next-gen professional graphics cards is NVIDIA Ampere. This is where the true jump in performance lies. Highlights of this new architecture that leverages Samsung’s 8nm NVIDIA custom process with 28 billion transistors. It also features an improved streaming multiprocessor and second-generation Ray Tracing cores (which improve ray tracing hardware acceleration) and third-generation Tensor Cores, the latter of which improves AI inference performance and DLSS resulting in better performance in higher resolutions.

The Ampere architecture also increases CUDA cores by up to double the single-precision floating-point compared to last-gen models. This means noticeable performance improvements in areas such as 3D model development and tasks like desktop simulation for computer-aided engineering.

Backed by a 3-year warranty, the NVIDIA RTX A4000 goes for roughly $2,000 depending on the branding.

To gauge its performance, we put the RTX A4000 through a series of resource-intensive tests and compared it to the higher-classed RTX A6000 to show you the differences between the two ends of the second-generation RTX architecture spectrum. We installed both the A4000 and A6000 inside a Lenovo ThinkStation P620 and HP ZCentral 4R for testing. 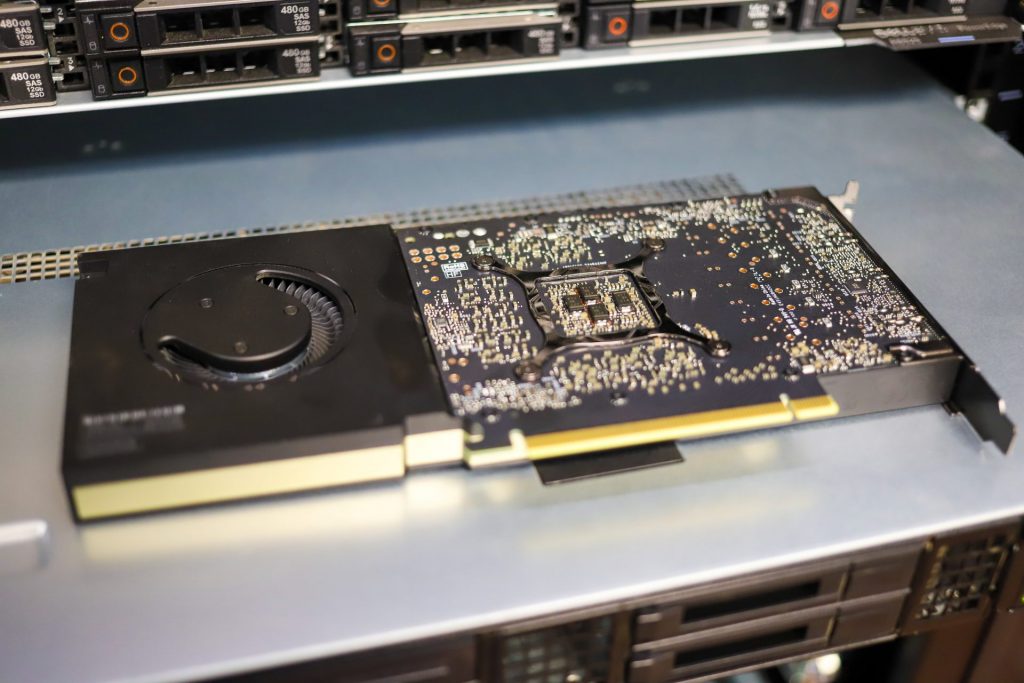 For this benchmark, the RTX A4000 showed great performance in both the Lenovo and HP systems (which showed very similar results) due to the new Ampere architecture. You will notice the same trend in the rest of our benchmarks.

Though the performance differential of the higher-end model (A6000) is sometimes significant, the A4000 still offers plenty of performance for most intensive use cases.

Overall, we saw more impressive performance with the A4000 when installed inside the P620, sometimes even offering similar or even better results compared to the A6000 (specifically the general operations and financial services categories). When populated inside the HP ZCentral workstation, the A4000 showed noticeably lower numbers with the exception of the GPU compute category.

Next up is the ubiquitous Blender, an open-source 3D modeling application. This benchmark was run using the Blender Benchmark utility. NVIDIA OptiX was the chosen render method, as opposed to CUDA, as the A4000 (like higher-end A6000) can utilize RTX. In this benchmark measured in seconds, lower is better. 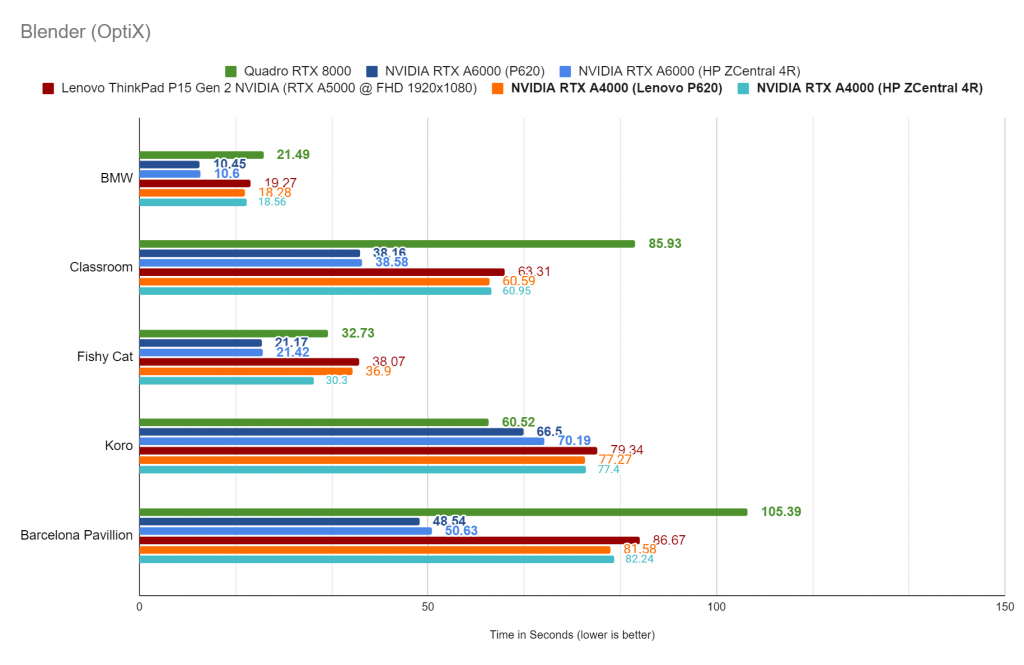 Though the A6000 was almost twice as fast when installed inside the P620 and HP ZCentral 4R, this was expected and the A4000 still showed next-gen results for its class.

Inside the Lenovo P620, the RTX A4000 scored 4,627 In the food rendering category while Hallbench showed 12,314. These were behind most of the tested drives, but again, the results were still good, as the other tested GPUs are equipped with higher-performing components. 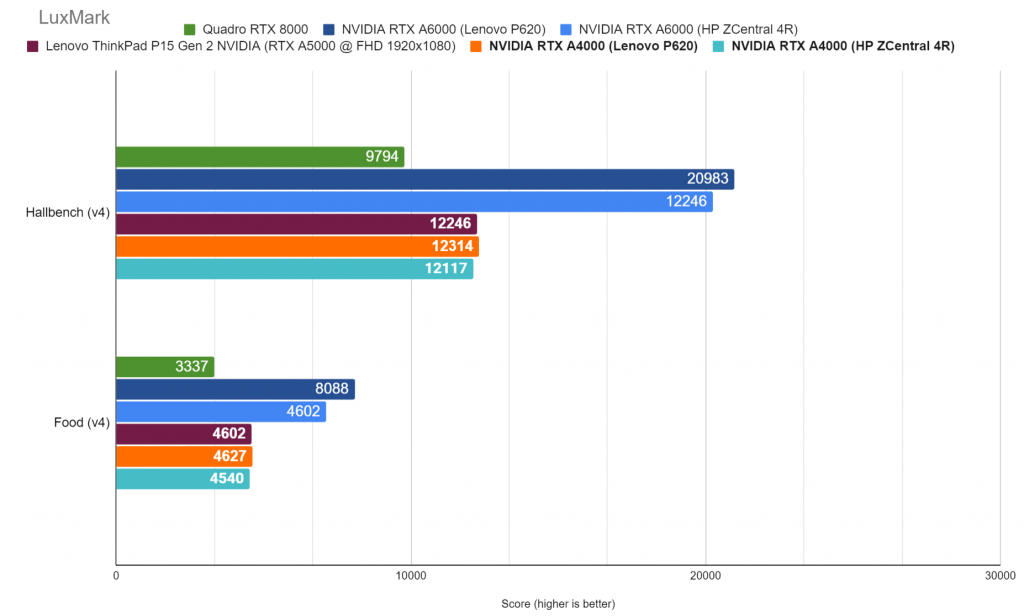 Here, we see an overall score of 392.47 and 391.72 when populated inside the HP and Lenovo workstations, respectively. This is roughly half of what the A8000 is capable of; however, it is an impressive result for an entry-level card and certainly leaps and bounds over its predecessor.

In comparison to higher-end consumer-grade cards, the official OctaneBench website scored the powerful RTX 3070 and 3060 TI and RTX 3080 (laptop model) with 400 and 376, respectively, while the Quadro RTX 4000 showed just 228 in their charts.

The RTX A4000 is NVIDIA’s latest midrange release from its portfolio of professional GPUs based on the second-generation RTX architecture. While the A6000 is an ultimate performer with a premium price tag, the new A4000 is the most affordable card of the line, featuring 6,144 CUDA processing cores, 48 next-generation RT cores, HDCP 2.2 support, and the PCI Express 4.0 x16 interface.  It also can connect to a maximum of four 4096 x 2160 displays at 120Hz. This card is meant for professionals who have more modest needs and a smaller budget, though it can still handle a wide range of resource-intensive professional workloads. 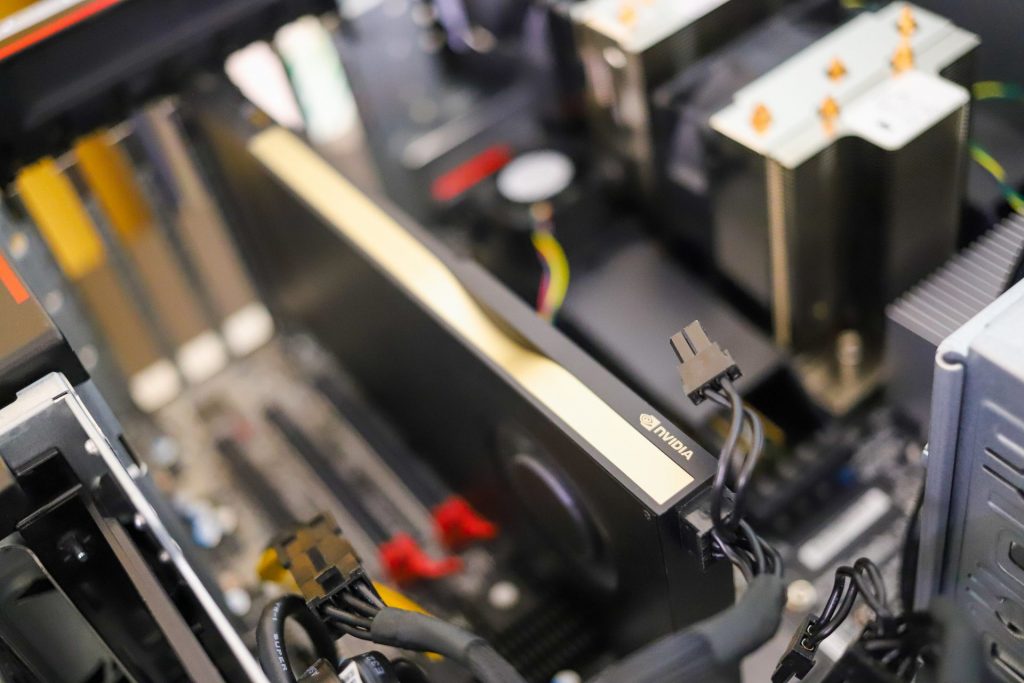 NVIDIA indicates that this is essentially a replacement of the Quadro RTX 4000; but that’s certainly an understatement, as the new A4000 blows it out of the water in every way. Performance is more in line with the desktop version of the well sought-after and powerful RTX 3070. That said, the new NVIDIA card doubles the GPU memory size of the RTX 4000 to 16GB GDDR6, which allows it to perform at a much higher level when dealing with complex 3D datasets. 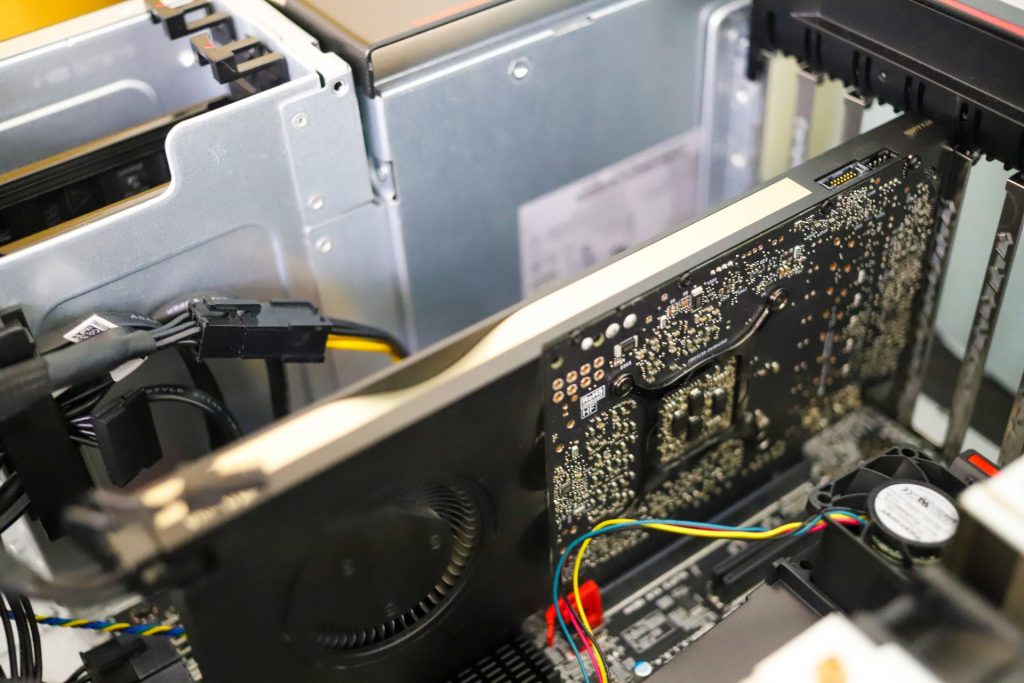 Moreover, Ampere uses 3rd-generation Tensor Cores to which improve AI inference performance while DLSS results in noticeably better performance at higher resolutions. There’s a lot more to Ampere and but all of this simply means the RTX A4000 (like the A8000) is a huge leap forward in GPU technology and even entry cards like this are able to show some huge gains in performance compared to the previous generation. With this release, NVIDIA is giving those who can’t afford high-end workstation GPUs the opportunity access to this impressive architecture.

So, who is the RTX A4000 for? Engineers and architects who use advanced professional applications and don’t need a top-end workstation GPU will certainly find the A4000 an ideal choice for their workloads. Those who need the best performance possible out of their workstation (with a much larger budget to boot) might opt for NVIDIA’s flagship RTX A6000 and A5000 that sits between the two.