The DS1522+ is Synology’s newest addition to their performance-driven NAS portfolio designed for both home and business users, replacing the Synology DiskStation DS1520+ as its successor. Featuring a compact 5-bay build, the Synology DS1522+ is highlighted by its AMD Ryzen R1600 processor. The biggest change of all though is the addition of an expansion port on the back of the NAS to allow users to add a single-port 10GbE interface for greater network performance.

The DS1522+ is Synology’s newest addition to their performance-driven NAS portfolio designed for both home and business users, replacing the Synology DiskStation DS1520+ as its successor. Featuring a compact 5-bay build, the Synology DS1522+ is highlighted by its AMD Ryzen R1600 processor. The biggest change of all though is the addition of an expansion port on the back of the NAS to allow users to add a single-port 10GbE interface for greater network performance. 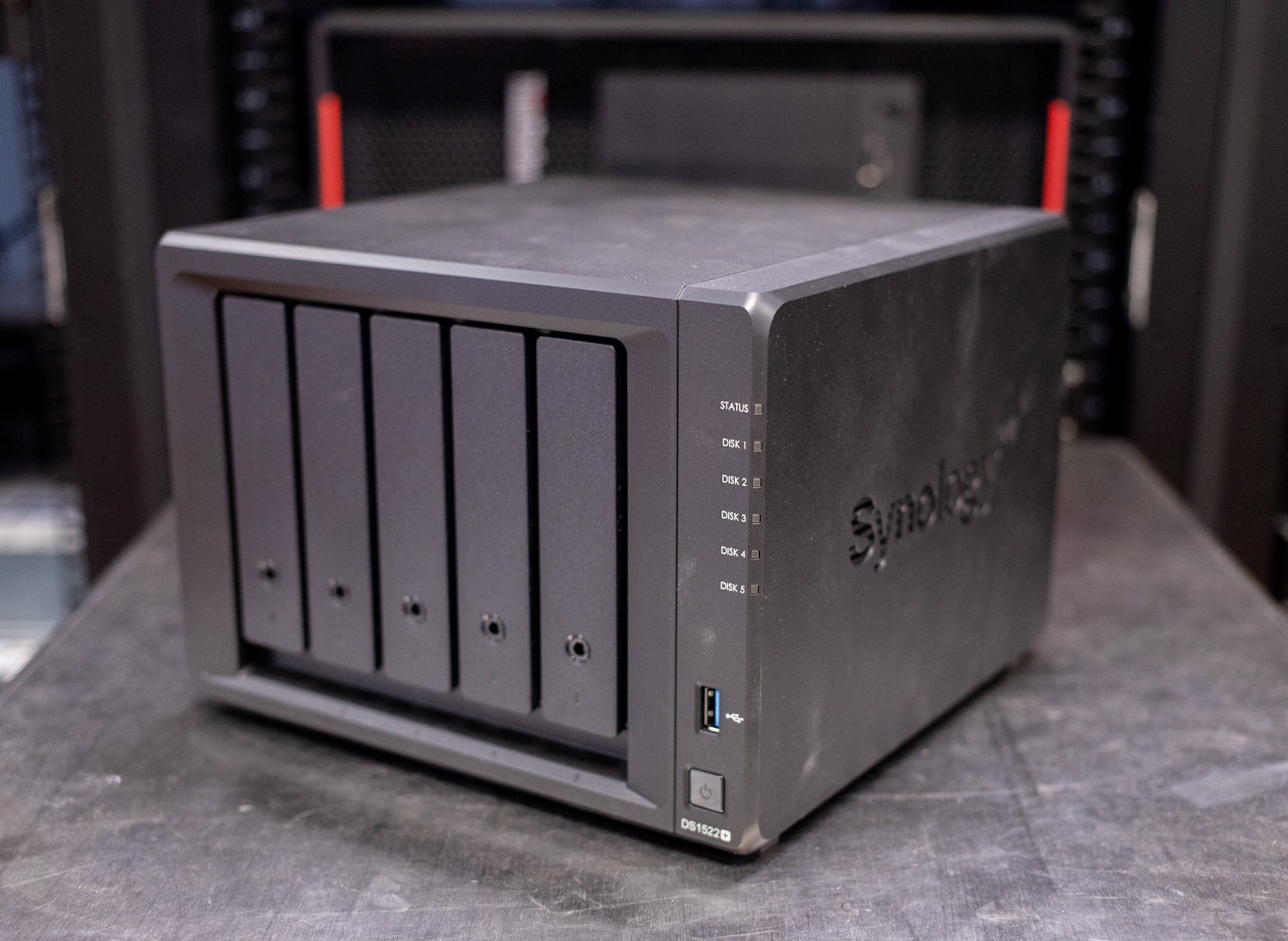 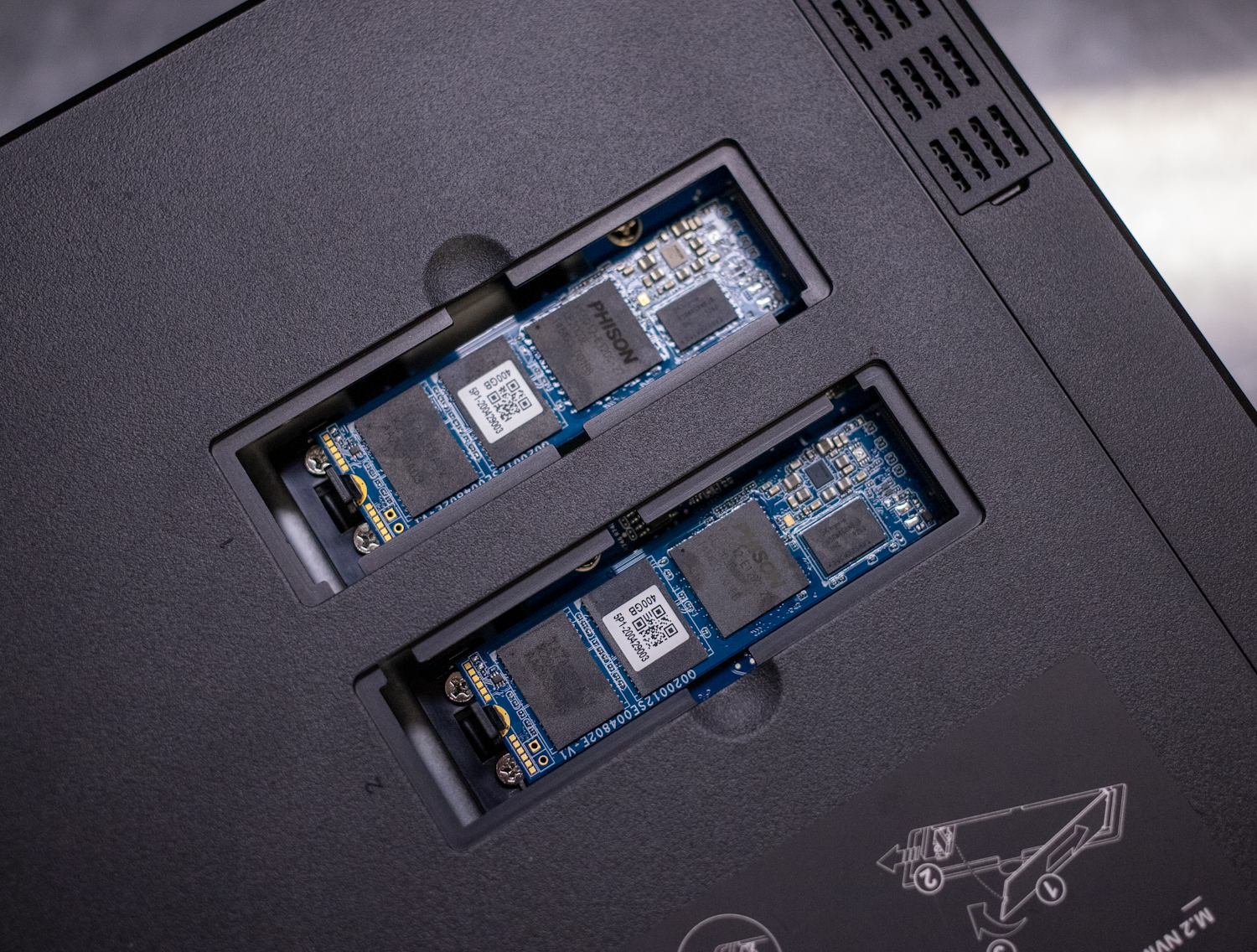 For networking, it comes with four 1GbE LAN ports (sadly no multi-gig) with network failover support and is quoted to deliver up to 736MB/s sequential read and 796MB/s sequential write with the mini 10GbE network module installed.

The biggest upgrade over previous generations is the addition of 10GbE connectivity, although the path Synology took on the 15-series model over the years has somewhat limited certain features.

The DS1517+ offered a PCIe slot to add supported NICs, although M.2 cache slots were not onboard the NAS. The DS1520+ added M.2 cache slots but skipped over network expansion options. That said, it is nice to finally have both on the model finally, but it would be even nicer if it was from the factory. 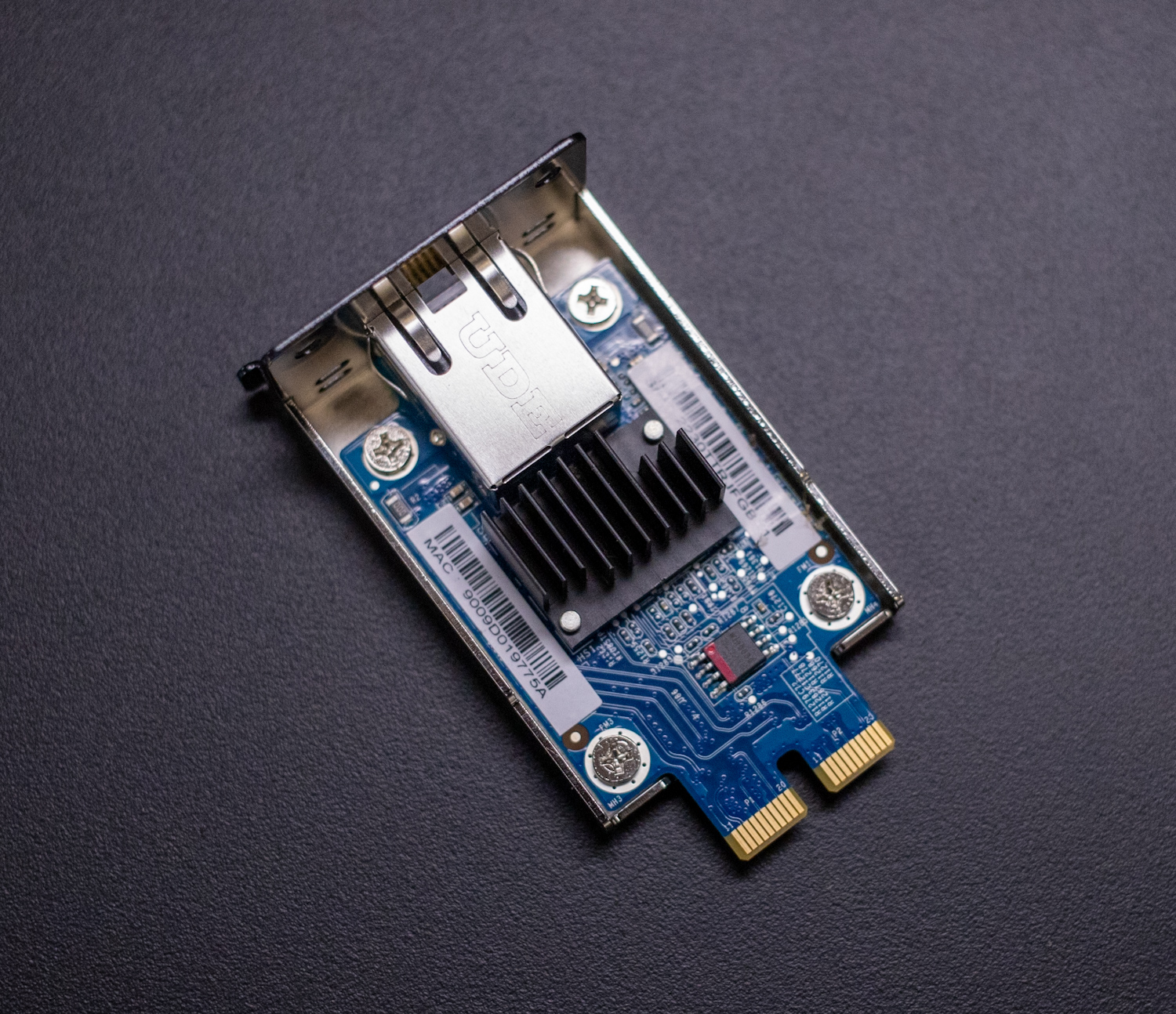 If you want the single port 10GbE port, it doesn’t come with the option right out of the box. This is a NAS meant for content creators, smaller businesses, and enthusiasts who don’t have the budget of larger organizations. Those requiring 10GbE networking are also still fairly uncommon. So, to drive down potential unnecessary costs, Synology decided to instead give users an easy and more affordable way to add it if/when they need it.

10GbE support is added via installing the E10G22-T1-Mini card in the newly available network upgrade slot. The DS1522+ is the first NAS to use this type of card/slot combo and allows Synology to offer 10GbE support without having to change the device’s physical size. For those that do want to take that path, it will take the $699 MSRP of the DS1522+ and add on an additional $149. So if you are comparing models, take the full price into consideration.

The DS1522+ fully supports Synology DSM like all releases, which includes multimedia management, hyper/desktop backup options, snapshot replication, and virtual machine manager. The DS1522+ can also be transformed into a surveillance hub for both home and work using the newly released Surveillance Station 9.0. The newest version of this software allows users to monitor multi-floor layouts and dual records to the cloud to safeguard footage from being lost. Overall, this is a highly versatile NAS solution with a powerful range of applications at its disposal.

Backed by a 3-year warranty (extendable to 5 years in select regions), the diskless version of the Synology DiskStation DS1522+ goes for roughly $700. This is the same launch price for the DS1520+ a few years ago.

The Synology DS1522+ is one of the more compact, 5-bay home office NAS solutions available, and is meant to be easily accessible beside a workstation. It looks identical to the DS1520+, sporting the usual black design from Synology’s Plus series we’ve come to know, with the five drive bays front and center. To right are the indicator lights, USB 3.0 port, and power button, while the sides of the NAS have Synology branding that doubles as ventilation for the device. 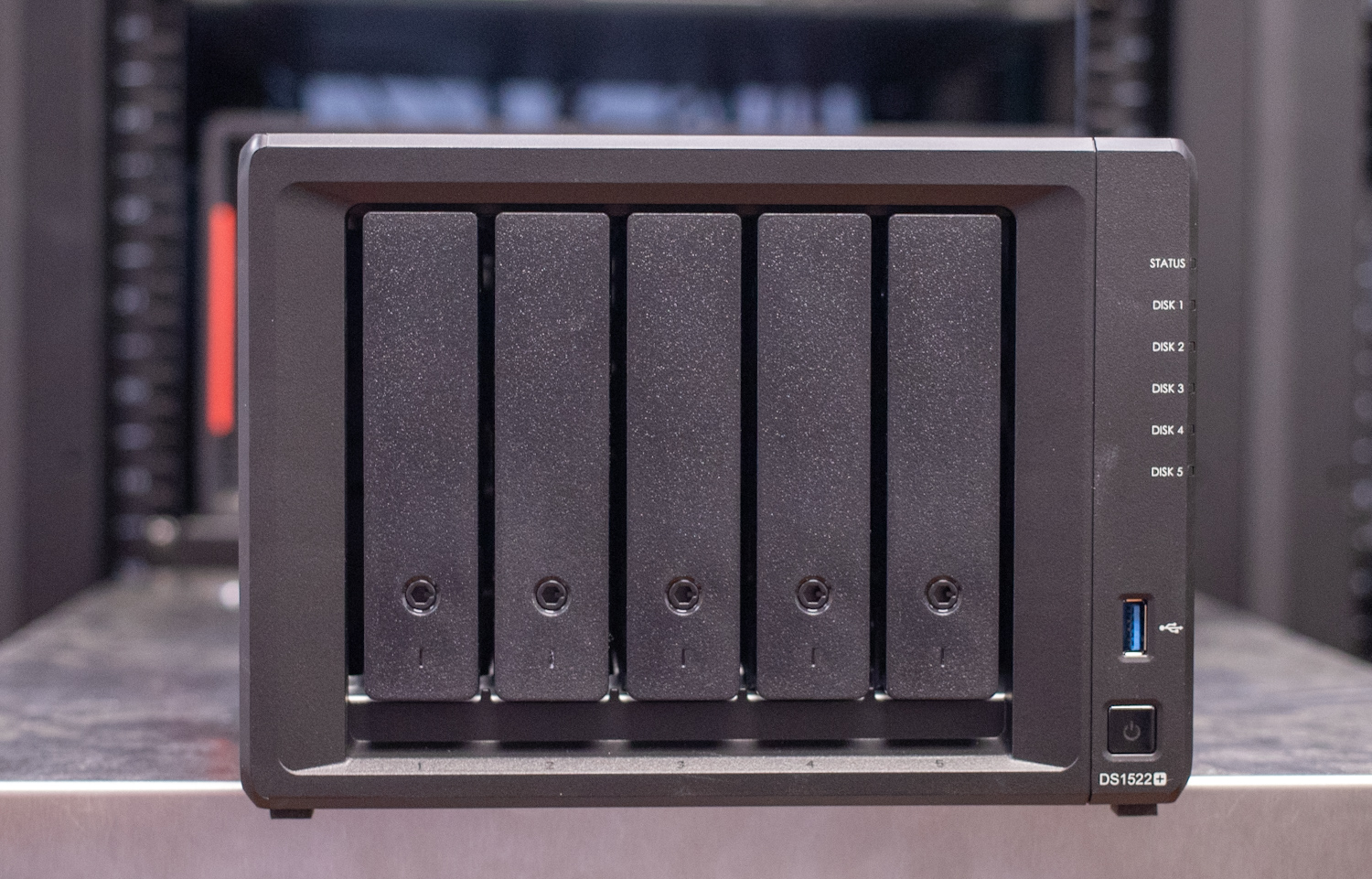 Turning the NAS around to the back panel reveals the dual system fans that run along the top (and take up about most of the real estate). Below this are four 1GbE RJ-45 ports, a reset button, two eSATA ports, the power port, a USB 3.0 port, and the Kensington Security slot. A significant change from other models in the Synology lineup is the external power supply now, versus one fully integrated. It reduces the size of the NAS itself, but you still need an external power brick. 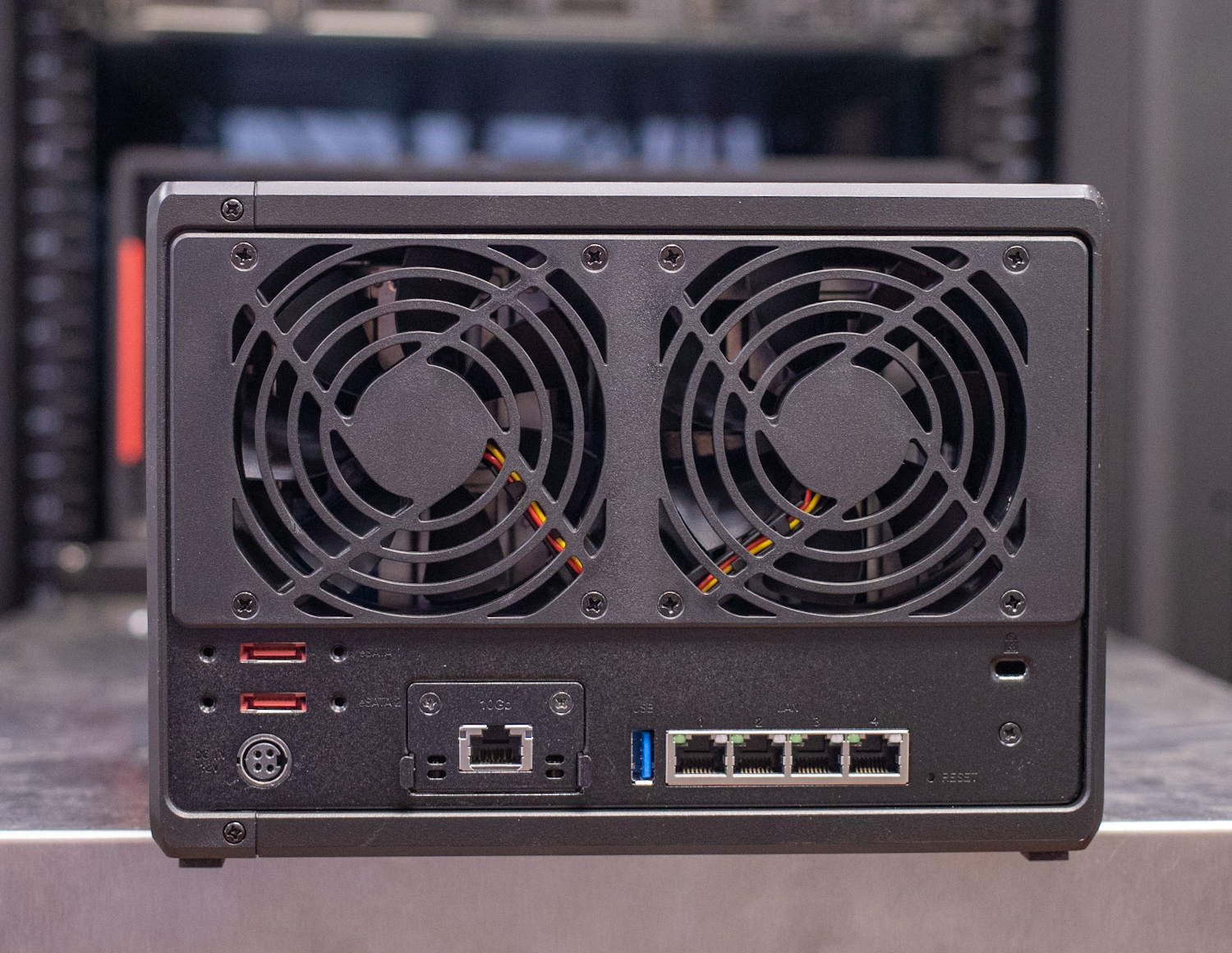 The biggest addition to the back panel (compared to the DS1520+) is the networking port slot, which is accessed by removing the two Philips head screws. Once open, you can insert the E10G22-T1-Mini card into the slot, adding a single 10GbE RJ-45 port to the Synology NAS without the need to disassemble the entire thing.

Adding this functionality opens up a lot of benefits for users. Creative professionals will be able to edit large video and image files directly from the NAS, while businesses will be able to allow numerous employees to simultaneously access larger files hosted on the DS1522+. Home users who want to maximize their storage speed or build a highly-efficient media streaming system will also benefit greatly from using a 10GbE infrastructure. 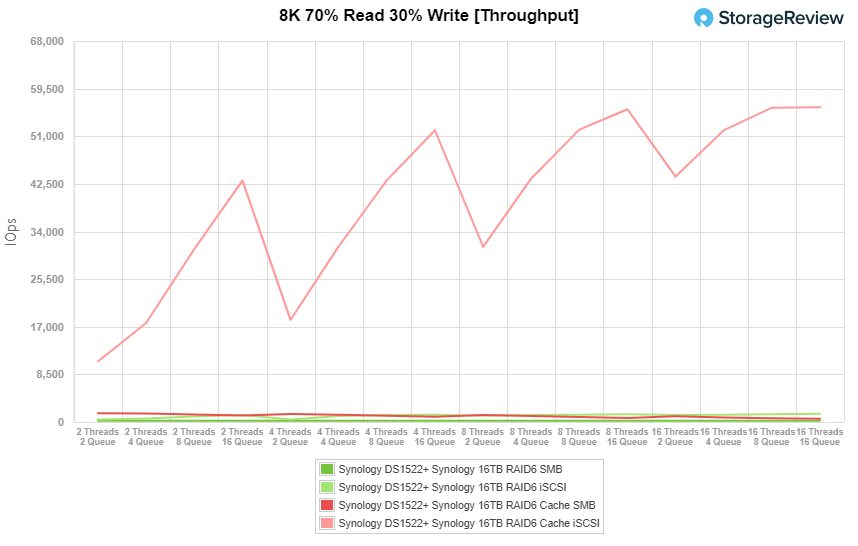 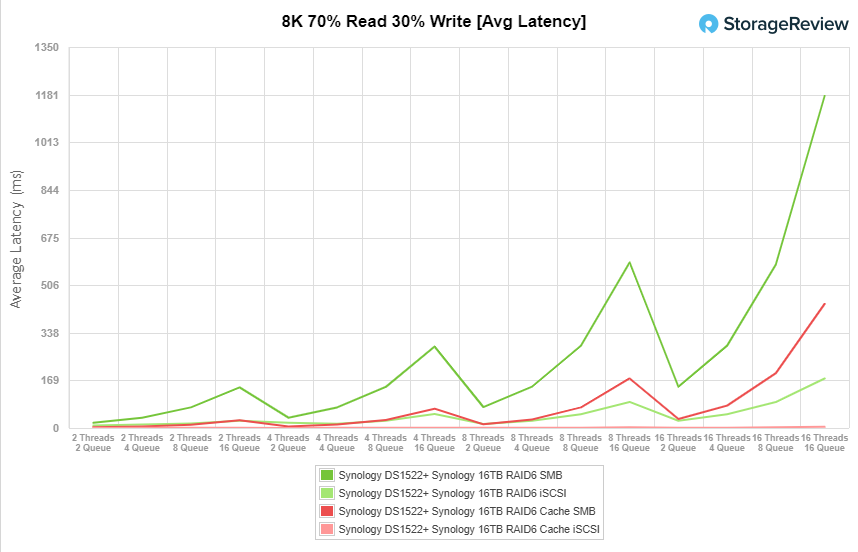 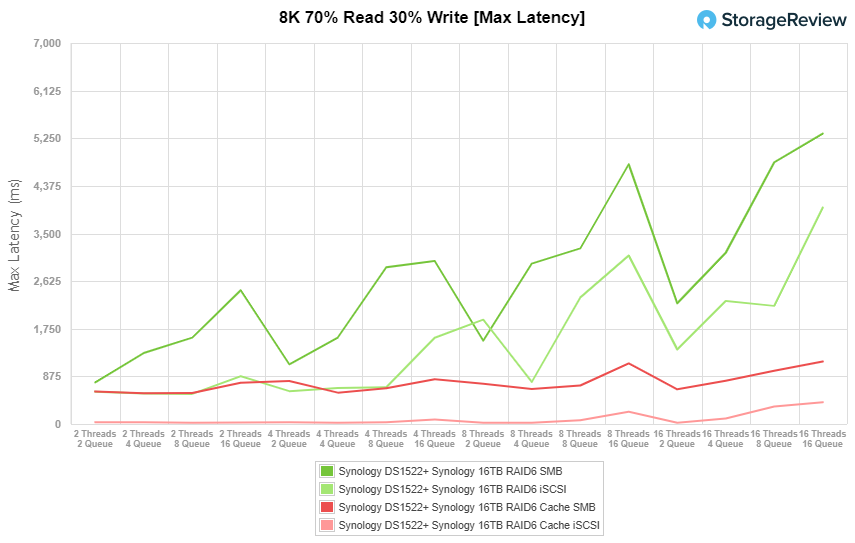 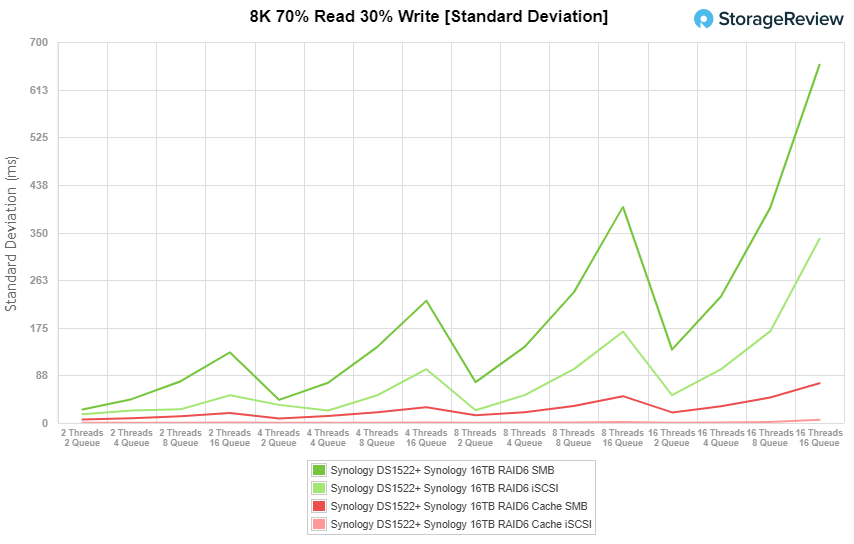 The DS1522+ is a follow-up to the DS1520+ and another addition to Synology’s Plus series of SMB/SOHO NAS solutions. Like its predecessor, the 5-bay DiskStation is outfitted with dual M.2 SSD caching bays to add quite a bit of performance flexibility, which was certainly established during our benchmarking. This time around, however, it features an AMD Ryzen R1600 CPU (compared to the last gen’s Intel Celeron J4124 4-core), up to 32GB of DDR4 RAM, dual DX517 expansion bays supports (to scale as your business grows), and four 1GbE ports.  Like all Synology devices, the DS15222+ is powered by DiskStation Manager (DSM), the company’s comprehensive NAS OS that features a vast range of multimedia and file management applications.

The biggest upgrade to the new DiskStation is support for 10GbE connectivity through an add-on card. This is a fairly big deal, as the DS1520+ was missing this functionality (i.e., Synology decided to remove the open PCIe slot used for 10GbE cards), which left users with only four 1GbE ports to transfer data.

That said, 10GbE support is added through an E10G22-T1-Mini card ($150) that is easily installed via the network upgrade slot on the back panel. Synology’s decision to make this a modular, optional add-on allows them to drive down the price of the NAS, as not everyone needs 10GbE networking. Those who do will be able to greatly benefit from its speed, including content creators and businesses dealing with large files and needing the ability to allow multiple people to access them at once. The card is expensive though and proprietary, it would have been neat to see Synology adopt the open standard OCP slot here instead.

Overall, the Synology DS1522+ is a solid choice for SMBs and home users looking to add a scalable NAS to their network. We were very happy to see that Synology brought back 10GbE support to the popular SMB line, which significantly improves I/O performance when combined with the dual M.2 NVMe SSD caching. Beforehand, users had to either combine the DS1819+ with a 10GbE/SSD combo card or increase their budget considerably to purchase a much higher-class model (like the DS1621xs+) to get these networking speeds. Thankfully, home users and SMBs now have a much more affordable way to benefit from a 10GbE-compatible DiskStation with the DS1522+, even if a proprietary design.