Phison has updated/unveiled a range of new technology, including the E26 PCIe Gen5 controller featuring the company’s proprietary I/O+ technology to help further augment gaming experiences. They also demonstrated their latest Gen5 X Series SSD enterprise controllers, which are expected to deliver up to double the performance per watt compared to the last-gen Phison X1 SSD Platform.

Phison has unveiled a range of new technology, including the E26 PCIe Gen5 controller featuring the company’s proprietary I/O+ technology to help further augment gaming experiences. They also demonstrated their latest Gen5 X Series SSD enterprise controllers, which are expected to deliver up to double the performance per watt compared to the last-gen Phison X1 SSD Platform.

Phison is also introducing the PS7201 Retimer, the successor to the world’s first PCI-SIG Association-certified PCIe 5.0 Redriver PS7101. Retimers are designed to solve performance and data integrity issues in enterprise and automotive applications and further enhances the Gen5 ecosystem. 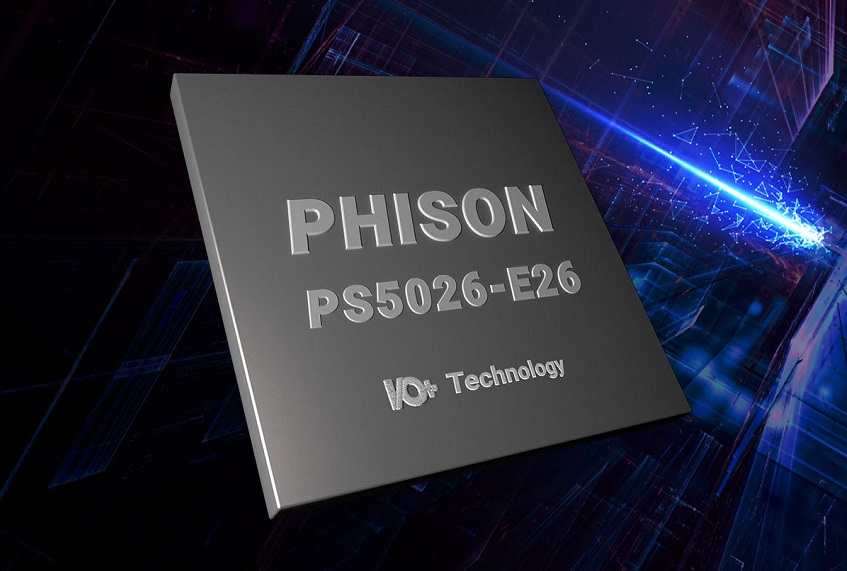 New interface technologies are often highlighted by the significant improvements in performance, and that’s certainly the case with PCIe Gen5. By doubling the bandwidth and improving latency by 30% compared to its Gen4 predecessor, PCIe Gen5 E26 allows for improved gaming and digital content creation experiences.

It also pairs the latest I/O+ Technology for enhanced sustained workloads and has improved power efficiency. Phison plans to partner with companies like Seagate, Corsair, and Sabrent to bring E26 SSDs to market.

We also spoke with Phison last year during our podcast, specifically about the benefits of Gen5 and what they will allow companies to offer.

In addition, Phison indicates that their new PS7201 Retimer can retransmit new signals over long PCIe Gen5 cable lengths, (which are typically between server nodes and rack storage enclosures) or between automotive computing systems.

The PS7201 also benefits from a full 16 lanes, which can be bifurcated, has an extended reach by 42dB at 16GHz, and features fast performance with latency modes <5ns. The CXL 2.0 architectures will also benefit from the PS7201 due to its fully compliant capabilities.

Enterprises alike have been waiting for the promise of Gen5 SSDs to hit the mass market. Currently, shipments are extremely limited and even most of the SKUs that are shipping in the enterprise are more akin to Gen4 SSDs than true Gen5. While they may use a Gen5 interface, there are usually fewer lanes, which limits overall performance. It will be interesting to see if SSD brands latch onto the Phison X Gen5 controller to be able to quickly come to market with a complete SSD. This is Phison’s first major effort into the enterprise SSD space.

The Phison E26 targets the client space, which is also hungry for Gen5 performance, especially as GPU direct storage gets closer to reality. The E26 has been shown off for a year now, so it’s fair to say that production has been much slower than anticipated. That said, Phison already has a deep bench of players who are likely to take up this platform. Seagate, Sabrent, and Corsair have all shipped Phison SSDs this year. We should see these drives in the market “soon,” most likely led by Sabrent who has been a consistent early adopter of Phison tech.