The Blackjet TX-1CXQ is a newer addition to Blackjet’s portfolio of media card readers for CFexpress cards that uses a Thunderbolt 3 connection. With its bandwidth connection, the TX-1CXQ is able to ingest, edit, and archive footage from a CFexpress or XQD media cards while reaching read speeds of up to 1,700MB/s. The Blackjet TX-1CXQ is made for those professionals and consumers that need to quickly offload or edit footage without interrupting the rest of their workflow or workspace.

The Blackjet TX-1CXQ is a newer addition to Blackjet’s portfolio of media card readers that uses a Thunderbolt 3 connection. With its bandwidth connection, the TX-1CXQ is able to ingest, edit, and archive footage from a CFexpress or XQD media cards while reaching read speeds of up to 1,700MB/s. The Blackjet TX-1CXQ is made for those professionals and consumers that need to quickly offload or edit footage without interrupting the rest of their workflow or workspace. 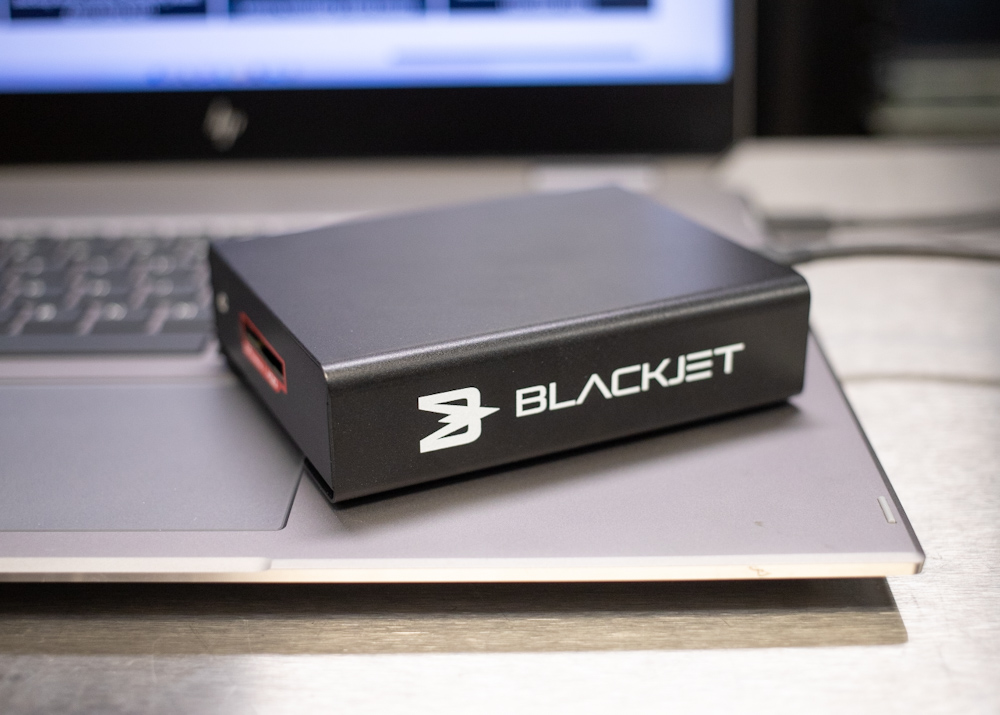 For those that aren’t entirely familiar with Blackjet, or its line of products, Blackjet is a part of Atech Flash Technology Inc. (AFT). AFT specializes in developing and manufacturing USB and Thunderbolt devices for pro users. AFT offers products for a wide range of systems including PCs all the way to Photo Kiosk machines, and AFT is also an ODM/OEM manufacturer of media cards in the photo market industry.

Some of the notable Thunderbolt products that Blackjet has come out with are the TX-1CXQ, the product we are reviewing now, the TX-2DS, a 2-bay and 4-bay  docking station that utilizes DX modules, and more cinema dock readers. Blackjet also has USB products such as a dual 2.5″ SSD USB 3.2 Gen 2 dock, a reader for RED MINI-MAGs, and a CFast 2.0 reader. Blackjet also made accessories, most of them being extra cables or power adapters that might be needed for any of the devices.

The Blackjet TX-1CXQ is a high bandwidth CFexpress Type B or Sony XQD media card reader that is a solid option for professionals that need to quickly archive or edit footage on a host device without having too much hassle trying to connect the card to their device. The TX-1CXQ is also a single cable connection that allows users to power and transfer data without needing adapters or worrying about plugging the device into an outlet.

The Blackjet TX-1CXQ is currently listed on Amazon for $125.00 and Blackjet does offer a 1-year limited warranty in case anything were to happen to the device.

Storage card readers come in many different sizes and weights. The Blackjet TX-1CXQ comes in at 92.3mm x 31.2mm x 11.4mm or 3.6in x 1.2in x 0.4in, a relatively small size for a Thunderbolt card reader and easy enough to have on a desk without it taking up too much room. The TX-1CXQ also comes in right under a pound, which is a decent weight and doesn’t feel cheap or as if it is going to break.

The TX-1CXQ has a rugged metal enclosure to ensure the durability and longevity of the device when it might be deployed in a rough environment or tossed around in a gear bag. The reader also features ventilation holes to help with heat dissipation as the TX-1CXQ can get warm when under heavy load. 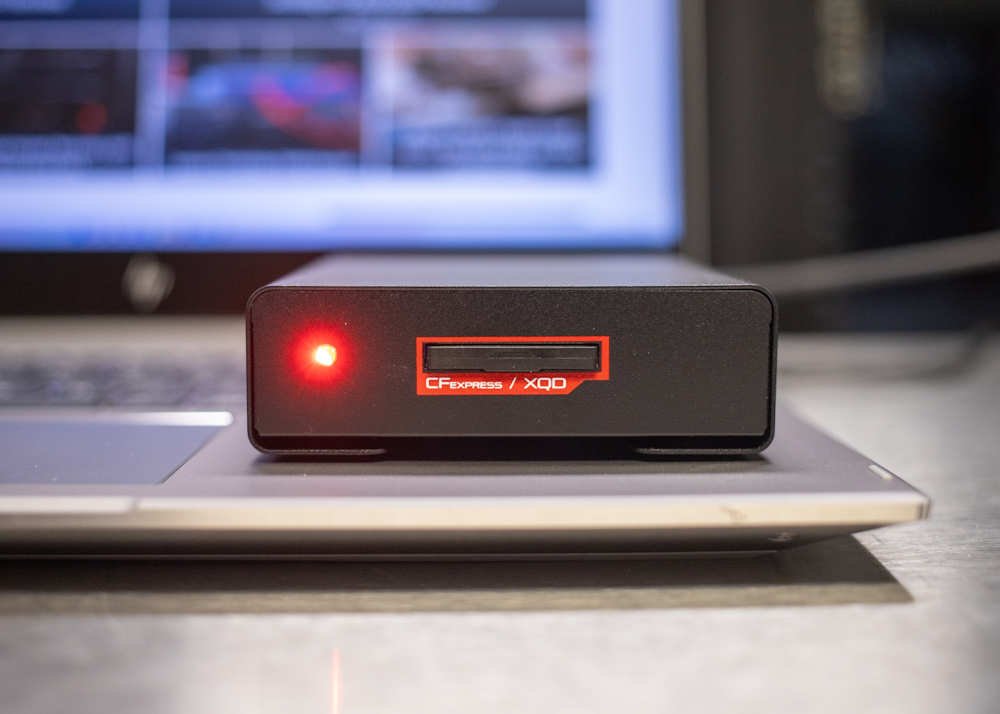 On the front of the Blackjet TX-1CXQ is the port for a CFexpress Type B media card or the compatible Sony XQD media card. Very easy for users to install a card as the port is also outlined in a red line with the words CFexpress/XQD to remind users that this Blackjet device can only use those types of cards. The TX-1CXQ also features a little red light that glows when a media card is inserted and is active. 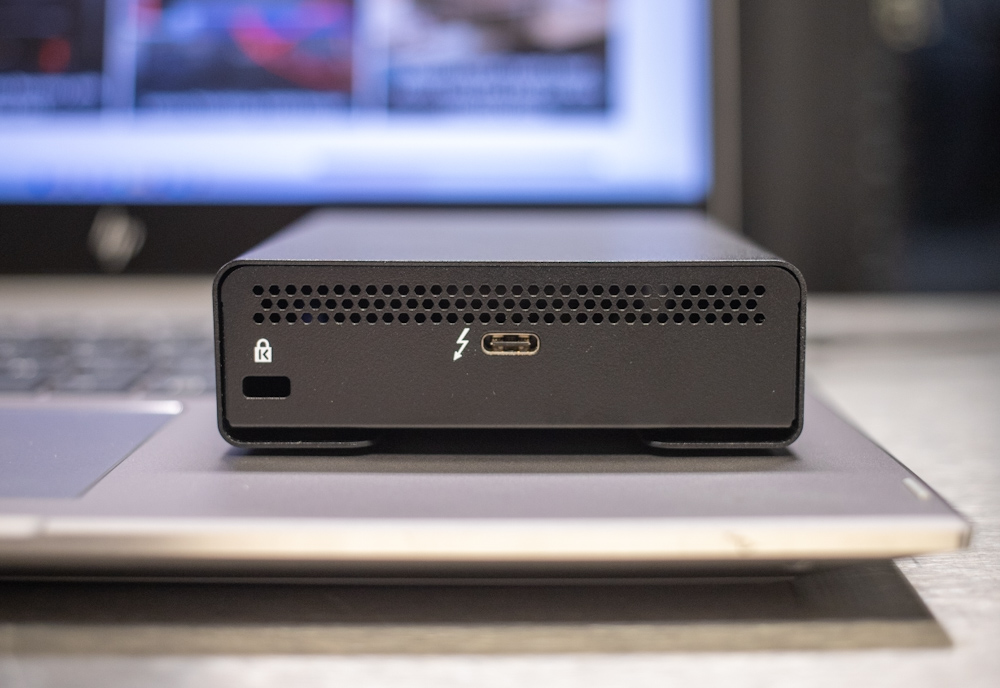 For the performance part of this review, we are taking a look at three different cards and benchmarking them while installed in the TX-1CXQ. The three different cards that we are utilizing are the Lexar Professional CFexpress Card, the Acer CFE100 CFexpress Card, and the SanDisk Extreme Pro CFexpress Card. We are also running these cards in two different tests, the first being the Blackmagic Design Disk Speed Test to see the read and write speeds as well as the supported file formats, and then an IOMeter benchmark, both a single thread and a four-thread test.

The first test was with the Lexar Professional CFexpress Type B in the Blackmagic Design Disk Speed Test in which the card was able to reach 825MB/s read and 487MB/s. The Lexar was able to hit many of the checkmarks in the “Will It Work?” section, showing support for many video files. 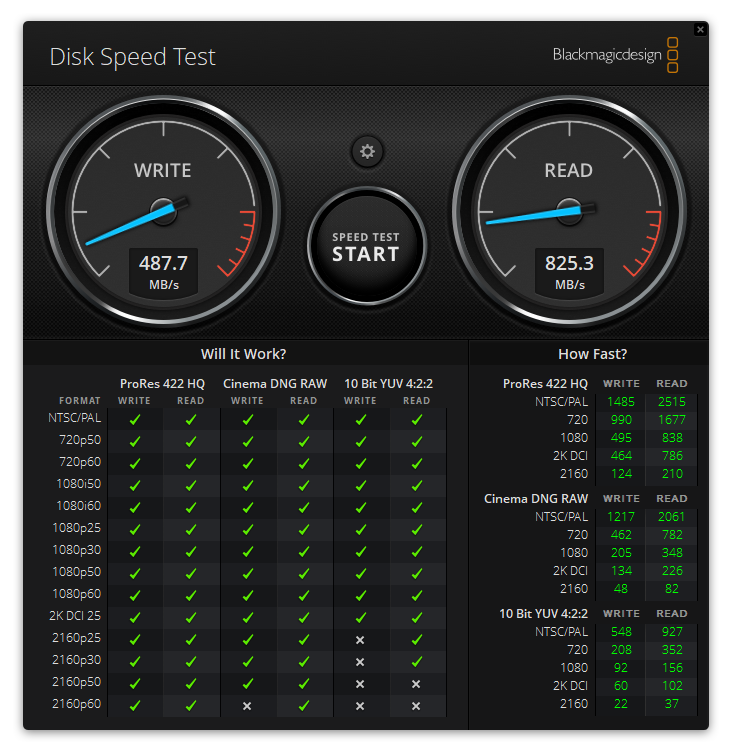 The next Blackmagic Test was for the CFE100 and was able to get us 1,430MB/s read and 294MB/s, along with hitting just as many checks in the “Will It Work?” section. As we can see from the first benchmark, the CFE100 far surpassed the Lexar Professional CFexpress in the read speeds nearly doubling it, however, was proportionally lower in the write speed, with the CFE100 being about half of the Lexar. 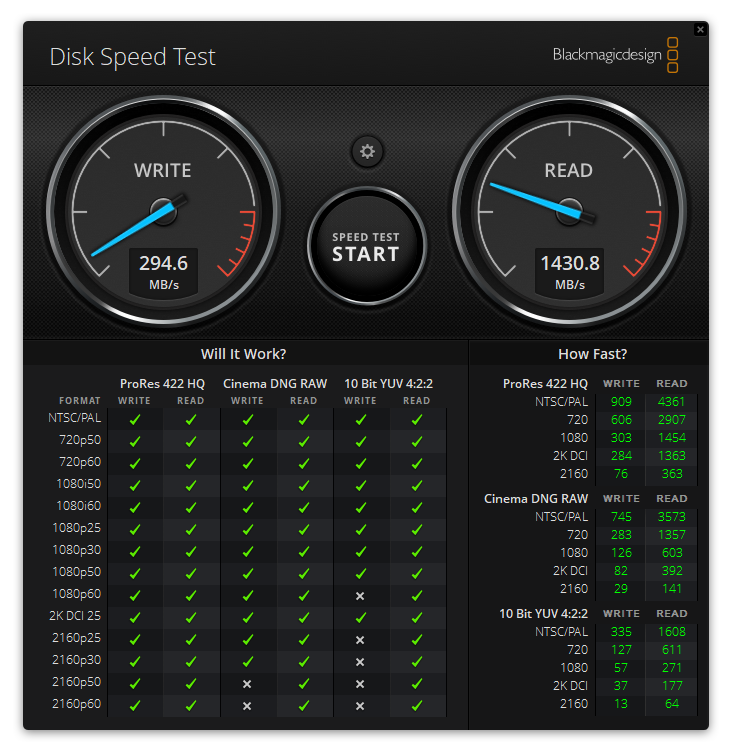 The last Blackmagic Design test we ran was with the SanDisk CFexpress Card where it posted a solid 1,425MB/s read and 1,060MB/s write. While these results didn’t quite reach SanDisk’s quoted numbers, they were better than the Lexar and Acer cards, which posted 825MB/s read and 487MB/s write and 1,276MB/s read and 1,004MB/s write, respectively (both of which used the same BlackJet CFexpress reader). 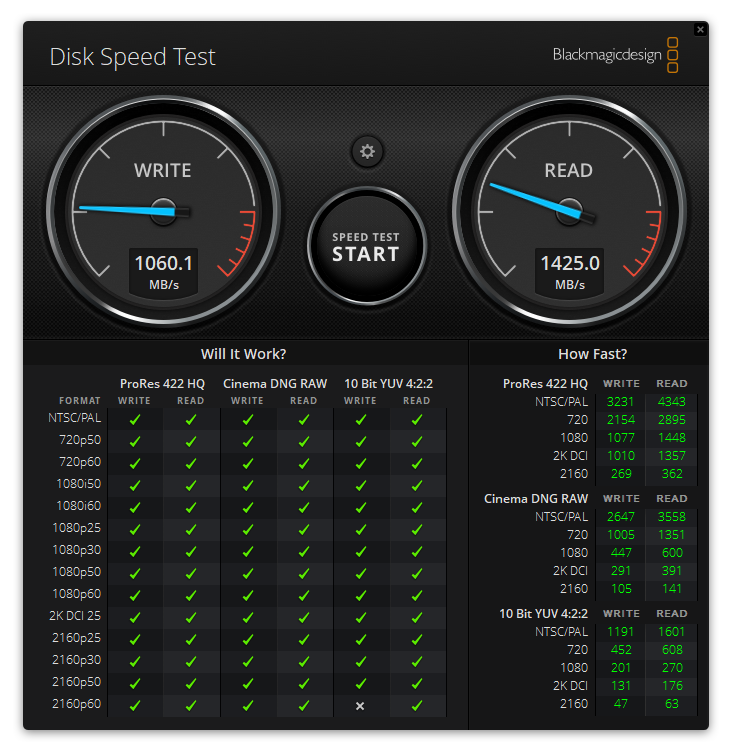 The Blackjet TX-1CXQ is a good tool to have for those that might need to quickly offload data onto another device and with the Thunderbolt port that shouldn’t be a problem. There is something important that Blackjet has noted, which is that for users who want to use an XQD card with the Apple M1 chips, there is no support as the drivers for it don’t exist. However, CFexpress B cards work with Apple M1 and Intel along with Windows 10 and 11. XQD cards work with Apple Intel and Windows 10 and 11. 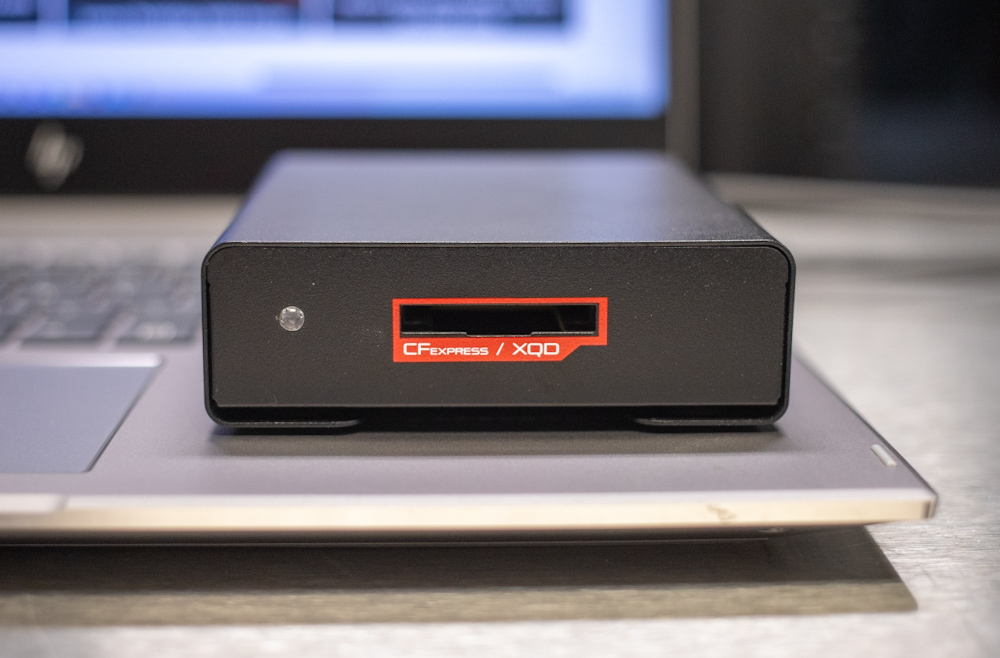 Moving onto the performance, each card performed decently as to what was reported by the manufacturer, although with slightly trailing numbers. In the Blackmagic Design tests, the Lexar Professional saw 825MB/s read and 487MB/s write while the Acer CFE100 hit 1,430MB/s read and 294MB/s write and the SanDisk Extreme Pro scored 1,425MB/s read and 1,060MB/s write.

Overall, the Blackjet TX-1CXQ CFexpress/XQD media card reader is a good option for the media professional that is looking to have a quick connection to their device without the hassle of having a more bulky card reader. With its compact yet durable design, the TX-1CXQ is able to fit into many environments without worry and can handle the bumps of travel. Overall we saw high bandwidth thanks to Thunderbolt 3, giving users plenty of performance to offload content.

The Dell PowerVault ME5 is Enabling Edge Applications