We’ve been spending a lot of hands-on time with the Dell EMC PowerStore arrays. We did a deployment hands-on of the all-new Dell EMC PowerStore. Then we looked at what it takes to scale PowerStore units, in this deep dive. Now we’re working to evaluate Dell EMC’s PowerStore X, which supports running applications on the array itself.  Dell EMC PowerStore AppsON presents compute and storage resources from the array directly into a VMware environment. This opens up a world of very interesting possibilities, especially at the edge.

We’ve been spending a lot of hands-on time with the Dell EMC PowerStore arrays. We did a deployment hands-on of the all-new Dell EMC PowerStore. Then we looked at what it takes to scale PowerStore units, in this deep dive. Now we’re working to evaluate Dell EMC’s PowerStore X, which supports running applications on the array itself.  Dell EMC PowerStore AppsON presents compute and storage resources from the array directly into a VMware environment. This opens up a world of very interesting possibilities, especially at the edge. 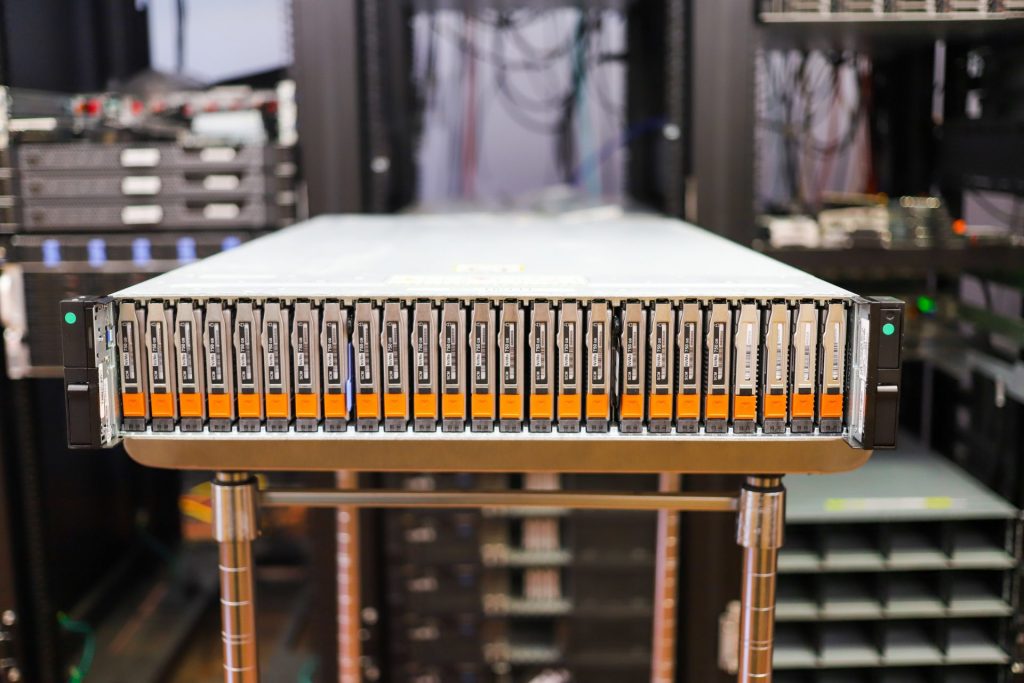 As a quick review, Dell EMC PowerStore is a midrange storage offering that is designed to meet current and future needs. Workloads have evolved (the virtualized and containerized landscape is the most striking example) and will continue to do so. Having storage ready for the changes is a much more appealing option than making drastic changes to deal with them. No one wants to do a forklift upgrade anymore when there is an option for your existing storage to just change to meet the needs. That means PowerStore can offer no-downtime data-in-place upgrades to either next-gen controllers or “next-gen plus one model up.”

There were other reasons that Dell EMC released PowerStore. They had a handful of storage options that complimented each other and it made more sense to put it all under one roof, with one set of engineering and support. It also allows a fresh start, in terms of a flexible, pay as you grow payment plan.

PowerStore has two flavors, T and X each with its own benefits. Both are container-based storage systems. PowerStore T runs on purpose-built hardware provided by Dell EMC and supports unified block and file workloads. PowerStore X, which we are looking at here, runs inside a VM on the VMware hypervisor. The PowerStore X allows applications to be deployed directly onto the array through AppsON. It should be noted that one doesn’t have to buy a specific model to convert it from a T to X or vice versa. In other words, there is one model of hardware and Dell will set it up as either a T or an X depending on customer needs. This isn’t something that can be done in the field.

A unique feature to PowerStore X is AppsON. Though it sounds like something you would put on your smartphone, AppsON enables users to run certain workloads directly on the dual-node controllers of Dell EMC PowerStore. As stated, the PowerStore X is a hypervisor-enabled appliance where the OS runs as a VM. AppsON allows for applications to be directly running on the array. 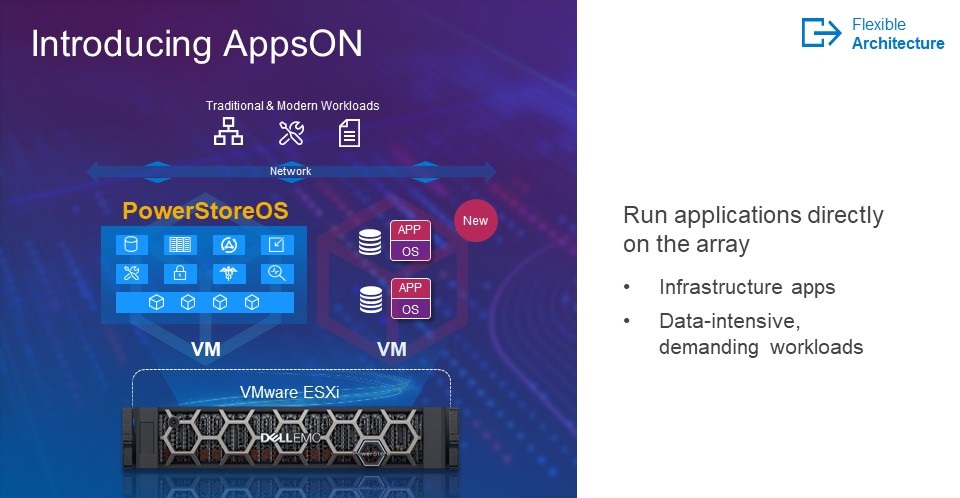 This allows for applications to move seamlessly between a PowerStore appliance and VMware ESXi servers through vMotion. So, if you are at an edge deployment and you need to run other applications but don’t want to give it its own host, you could leverage AppsON to run applications on your PowerStore array. As opposed to adding more servers and network congestion.

A PowerStore array leveraging AppsON is kind of like adding “free” server power to your virtualization environment. The PowerStore builds are pretty robust these days, our system had over 90GHz worth of CPU to deploy. Of course, this isn’t viewed as a server replacement exactly, though it can be in the right situation. Mostly Dell EMC wanted to free up unused resources in virtualized environments. There are also elements of converged infrastructure here, but ultimately AppsON is new ground that doesn’t remove any traditional functionality. Storage resources such as SAN and vVols can still be leveraged while using AppsON.

AppsON use cases continue to emerge, but it can enable a variety of workloads. In particular, this feature is ideal for infrastructure and data-intensive applications. Administrators can run needed applications through AppsON that help them monitor their data center without added undue complexities to their storage environment. Those that can benefit the most are probably edge, ROBO, mobile, and tactical deployments, however, anyone can benefit from the feature.

We’re not saying AppsON is some sort of VM panacea for data center issues, but it does open up a lot of doors that were behind various hardware and software barriers before.

Enough talking about it, let’s dive in and see how easy it is. First off, PowerStore uses its own operating system, PowerStoreOS. Log in through PowerStore Manager as an admin to get started. If you have yet to configure your array, you will have to do so first.

During initial configuration, users will need to provide the Administrator credentials for their vCenter as well. As we were switching from a T to an X we had to reconfigure our PowerStore 7000. The main dashboard looks more or less the same with 7000X now at the top. 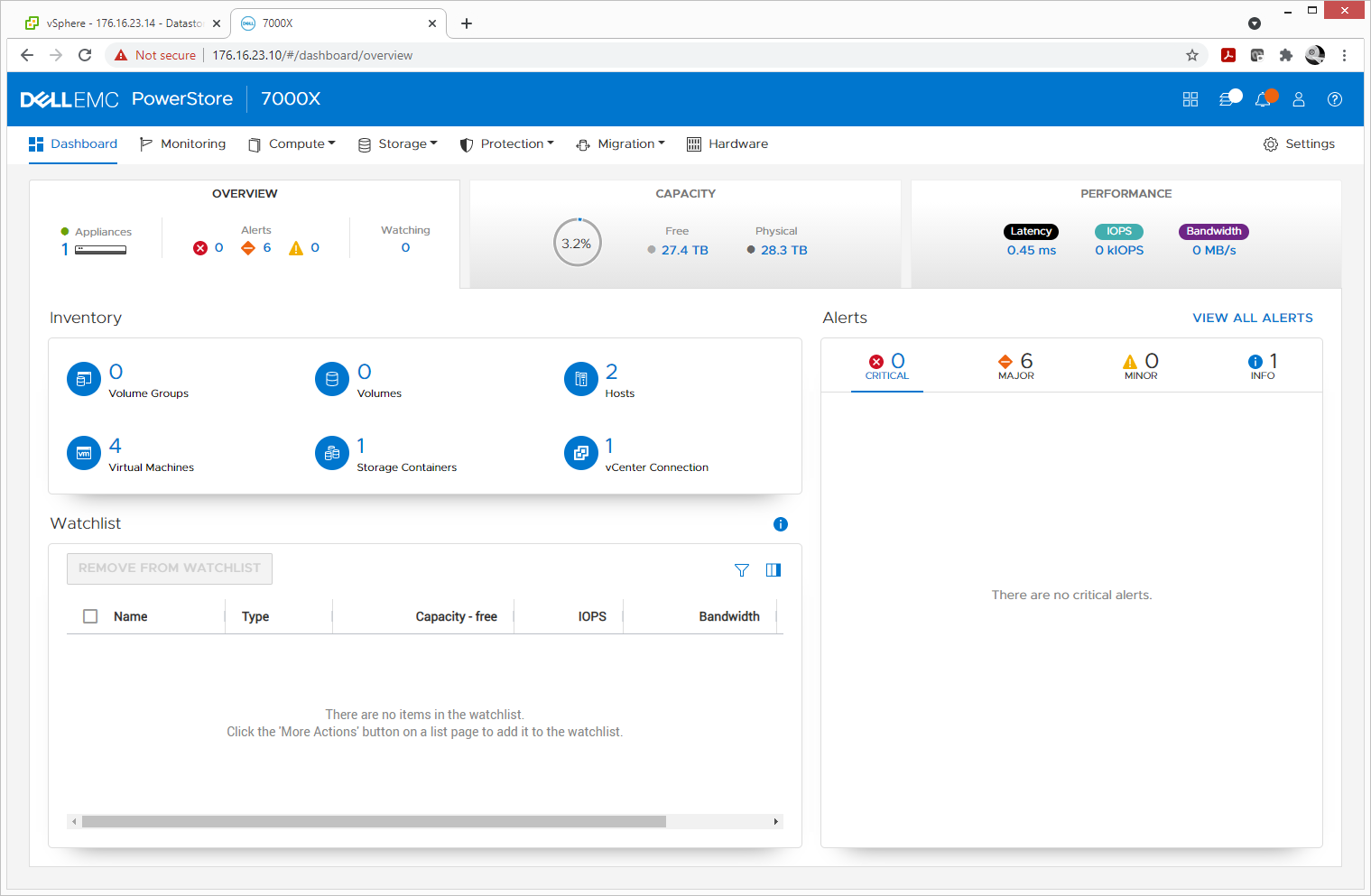 Since this integrates with VMware, users need to connect to vCenter. vCenter can be launched through the Compute tab. 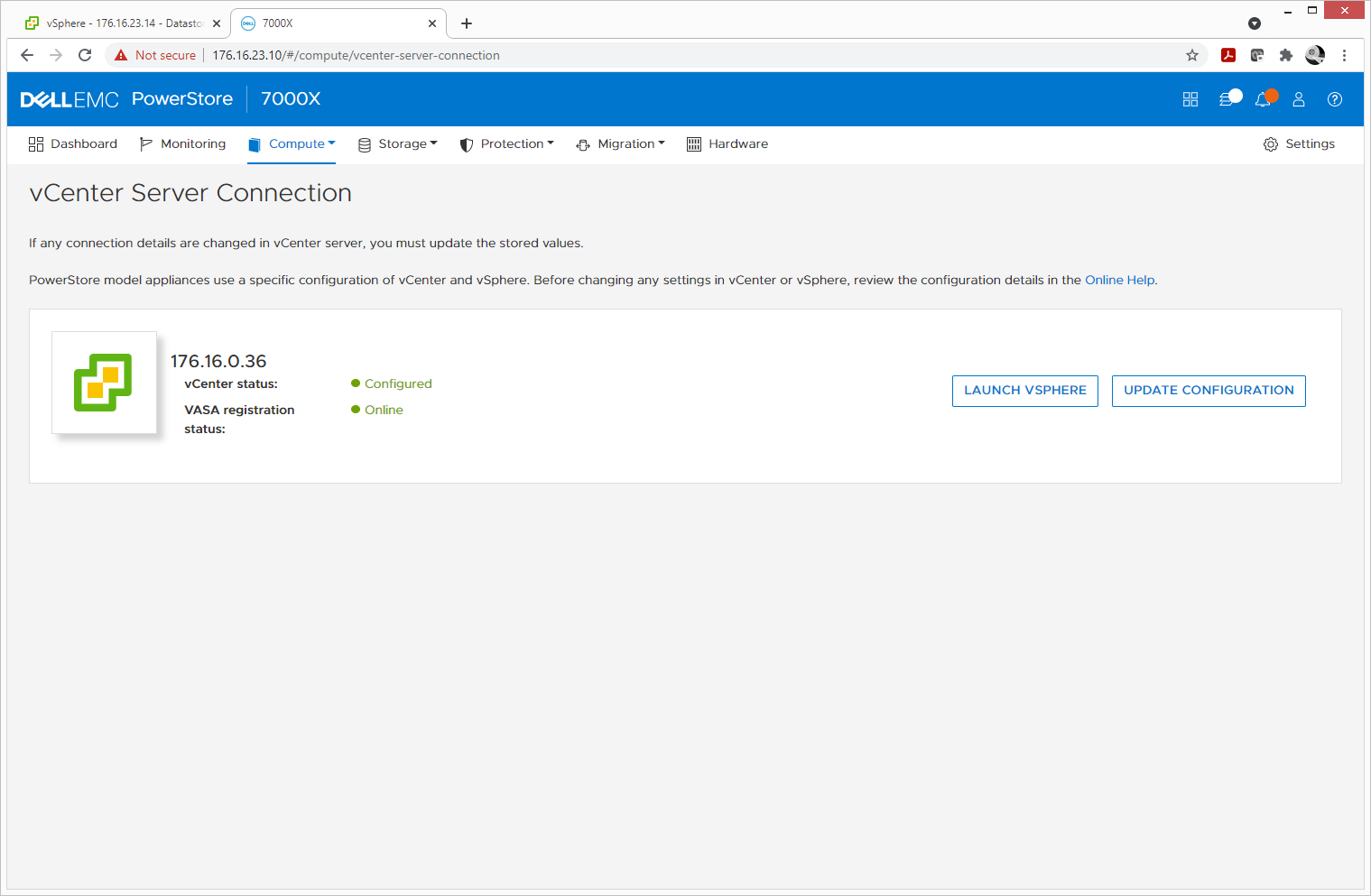 Within vCenter, you can drop down and find your PowerStore X of your PowerStore cluster. Here we see around 94GHz of idle compute resources and just over 750GB of memory available. 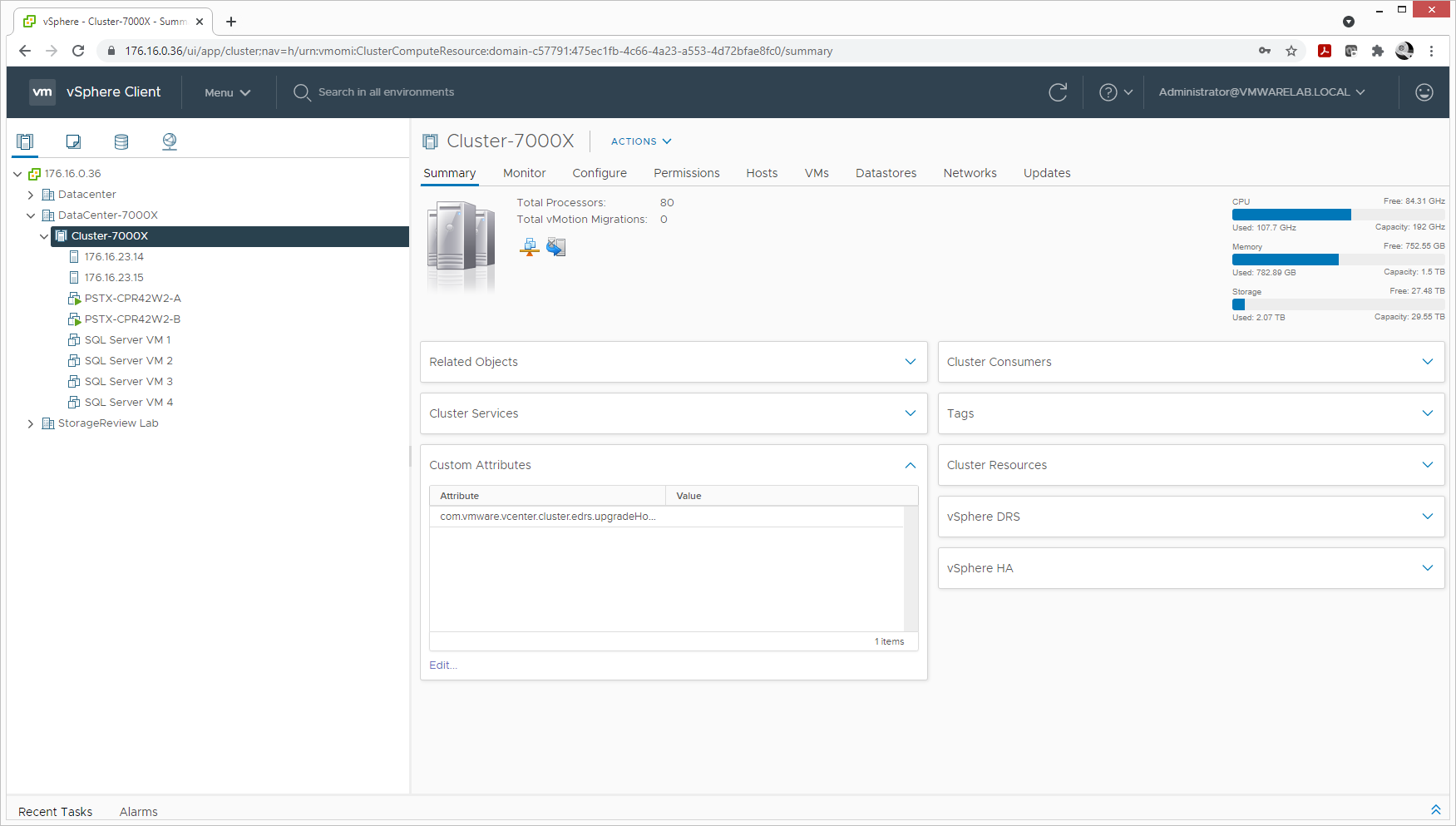 Drilling down a bit more and there it is. Going from normal hardware-based PowerStore to a virtual one was fairly simple. We have our 29TB of storage presented to the VMware cluster as a vVol. 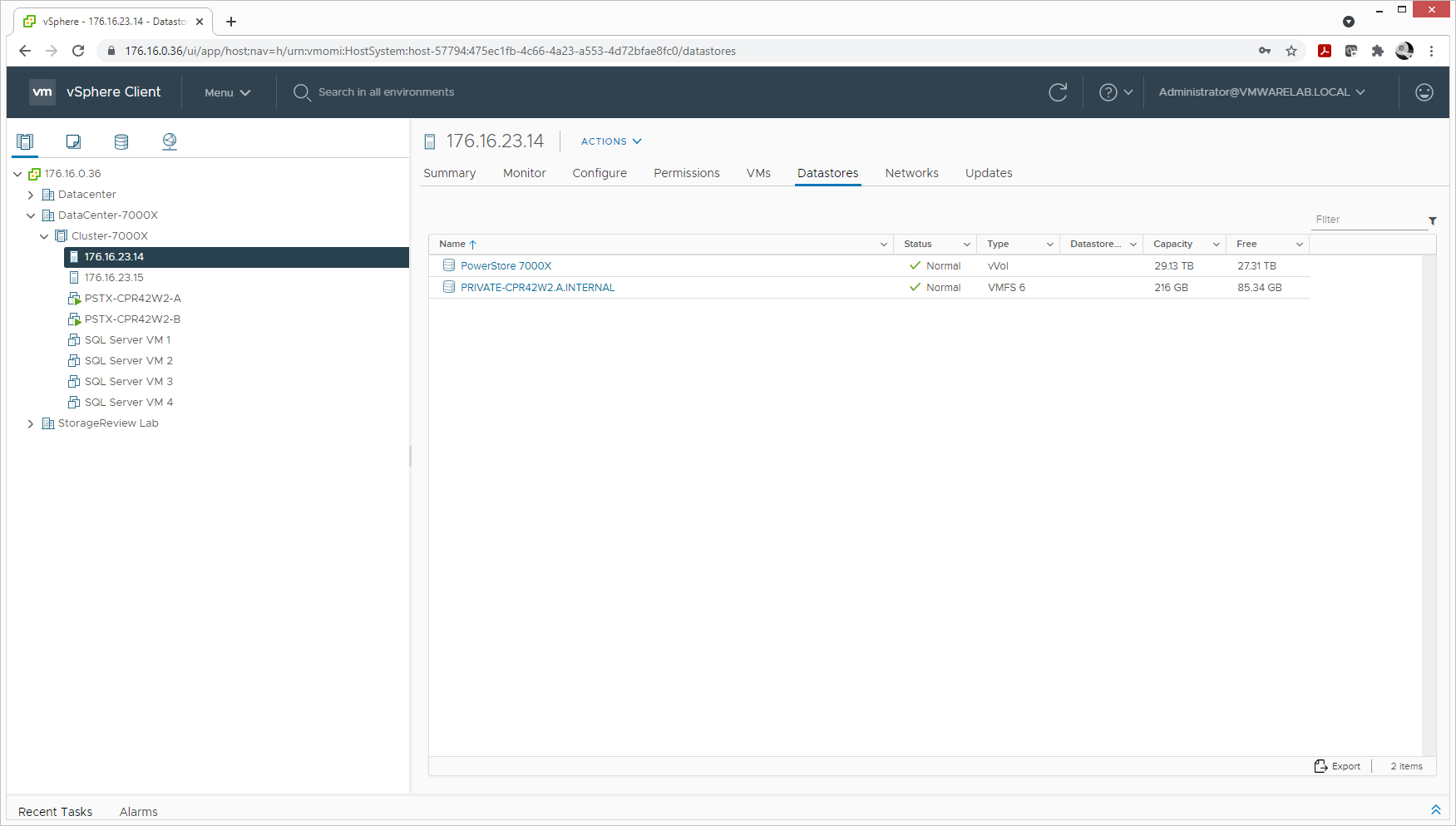 Swapping back over to PowerStoreOS you can create hosts from your virtual PowerStore appliance through Compute>Hosts & Host Groups. We see both our nodes here. 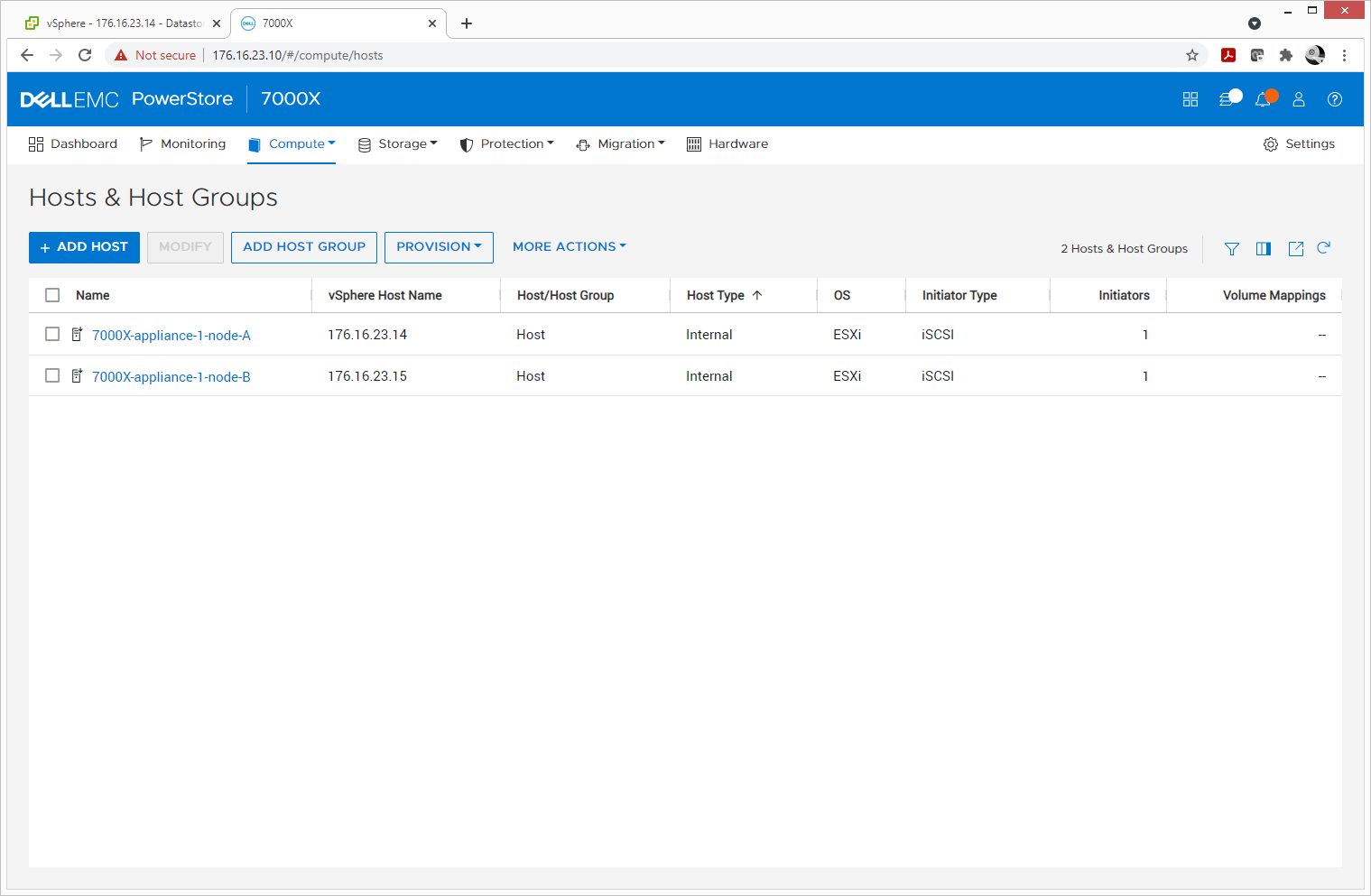 Through Compute>Virtual Machines we see the VMs we have set up and the node where they reside. 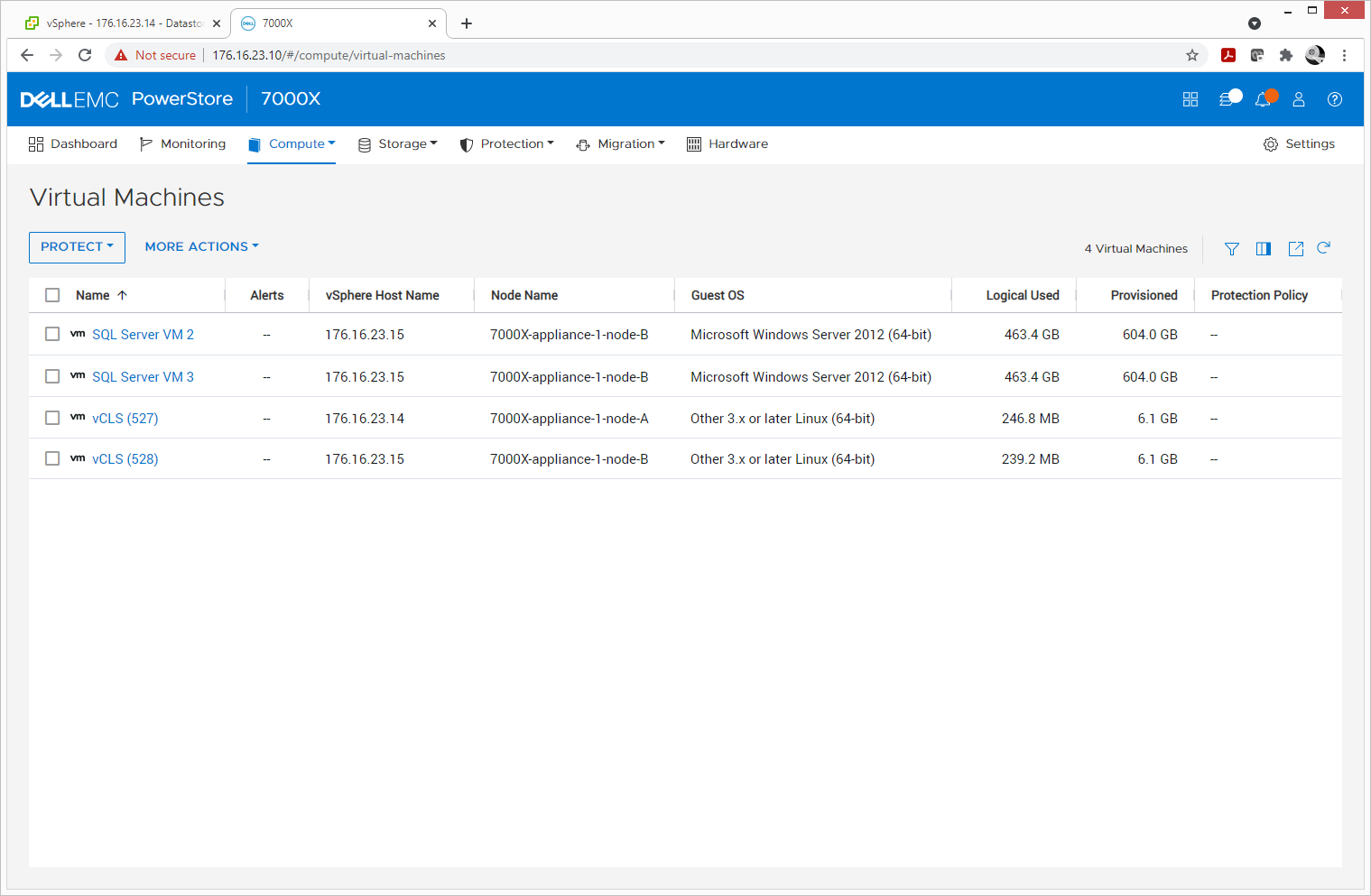 Under Storage, we can see that the virtual array with AppsON looks more or less the same as a physical array would. 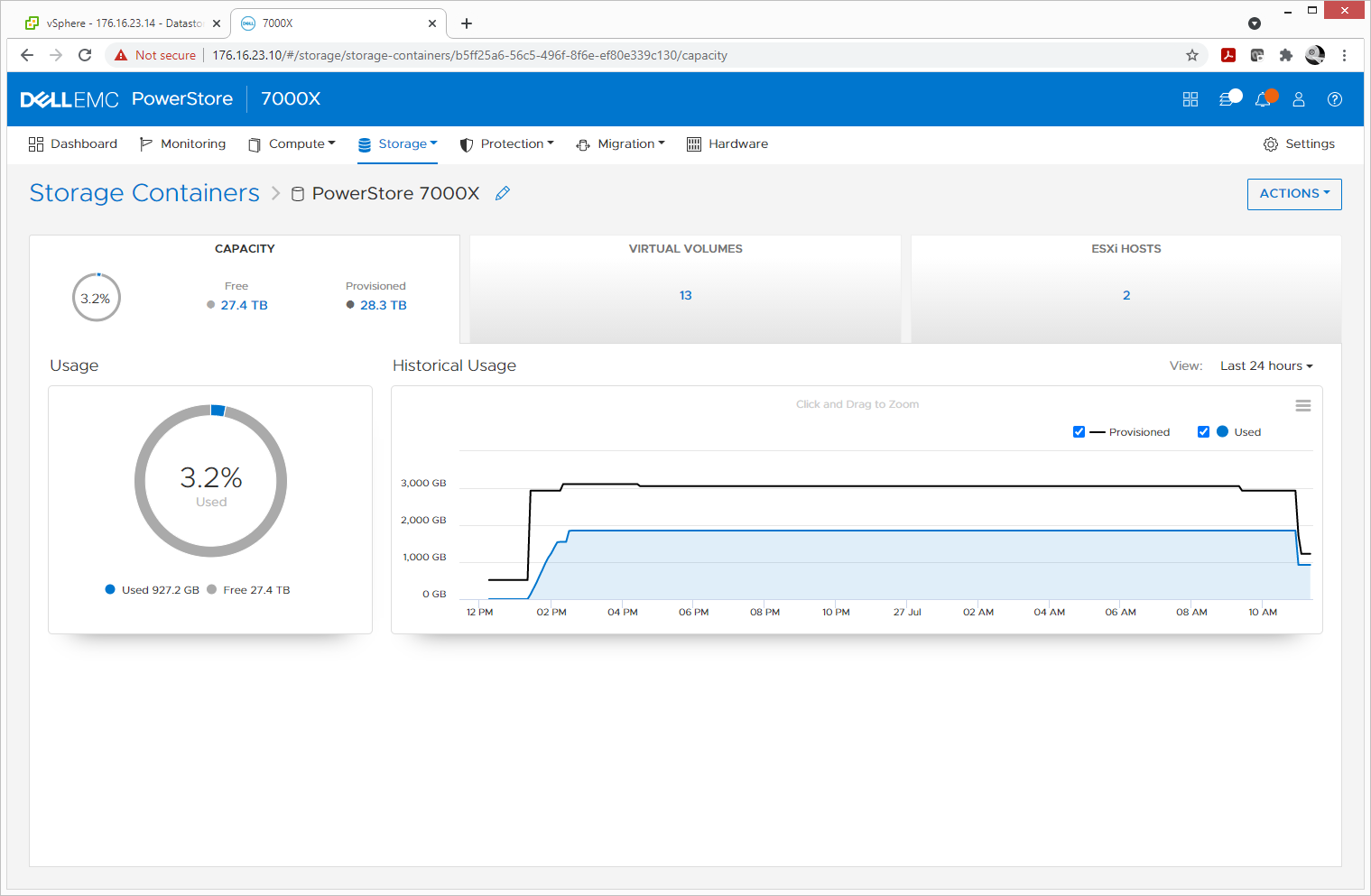 Finally, while this isn’t a performance-oriented review, we again can see that PowerStore X acts more or less the same way PowerStore T would. We operated some mid-size workloads, and while performance going to exceed a dedicated host, there is an incredible amount of free resources on tap being able to leverage the array hardware. 90GHz of compute and 750GB of RAM can go a long way. 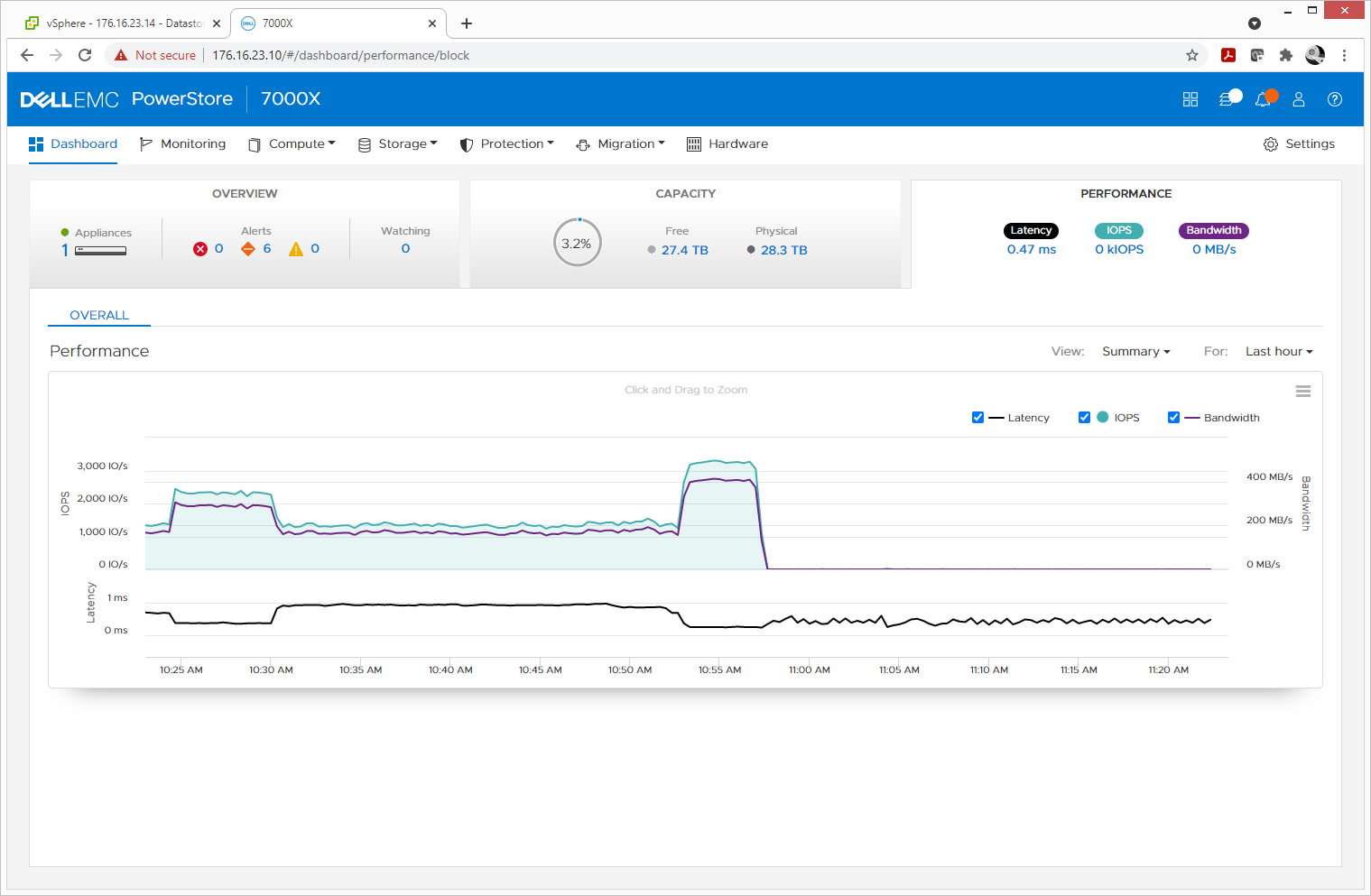 Dell EMC PowerStore consolidated many previous lines under a single banner. PowerStore addresses current and future storage needs through its massive flexibility. Flexible, it is. There are two configurations, PowerStore T and PowerStore X. Both types are running on the same hardware, but the X opens up an expansive virtualization world including AppsON.

While we used a PowerStore 7000T for a previous hands-on, we reconfigured it to an X (this isn’t a normal field operation) so we can check out the AppsON function. AppsON allows for workloads to be run directly on the controllers of the PowerStore. Customers don’t lose any storage functionality, the applications can be run side-by-side with normal storage functions such as SAN or vVols. This gives users even more options with their storage, something that hasn’t really been seen before and is especially useful in constrained spaces.

As far as setting up and leveraging AppsON,  after connecting it to our vCenter, we were up and ready to go. It was really simple and behaved more or less the same way as the T model with the ability to now add workloads right along with the storage. For virtualization admins, the X array feels oddly familiar, more like a converged appliance than an array though.

In our lab, we decided to push the array some, deploying a SQL Server environment on our array. Because this operates in the friendly confines of VMware, it was simple to migrate VMs to the array and simulate some testing. While we didn’t drive the system to its performance maximums, we did run several thousand transactions with the CPU/DRAM made available to us. Dell Technologies has pitched the notion that the PowerStore X arrays are beefy enough to handle transactional performance at the edge. On that front, they’re absolutely correct.

If you want some hands-on time with PowerStore, Dell has set up a Hands-on Lab and Interactive demo for it. You can also see more information about PowerStore systems here.

Learn more about PowerStore in an Infographic!