Taiwan-based Tyan is well known in enterprise IT as a server platform producer. June 2021 saw the introduction of its latest blade servers, including the Transport SX TS65-B8253 under review here. This 2U, two-socket rackmount server is intended for cloud storage, supporting 12 hot-swap 3.5-inch LFF drives, including four NVMe U.2 drives. It runs on AMD’s 7003 EPYC processors and supports 8 DIMMs per processor.

Taiwan-based Tyan is well known in enterprise IT as a server platform producer. June 2021 saw the introduction of its latest blade servers, including the Transport SX TS65-B8253 under review here. This 2U, two-socket rackmount server is intended for cloud storage, supporting 12 hot-swap 3.5-inch LFF drives, including four NVMe U.2 drives. It runs on AMD’s 7003 EPYC processors and supports 8 DIMMs per processor. 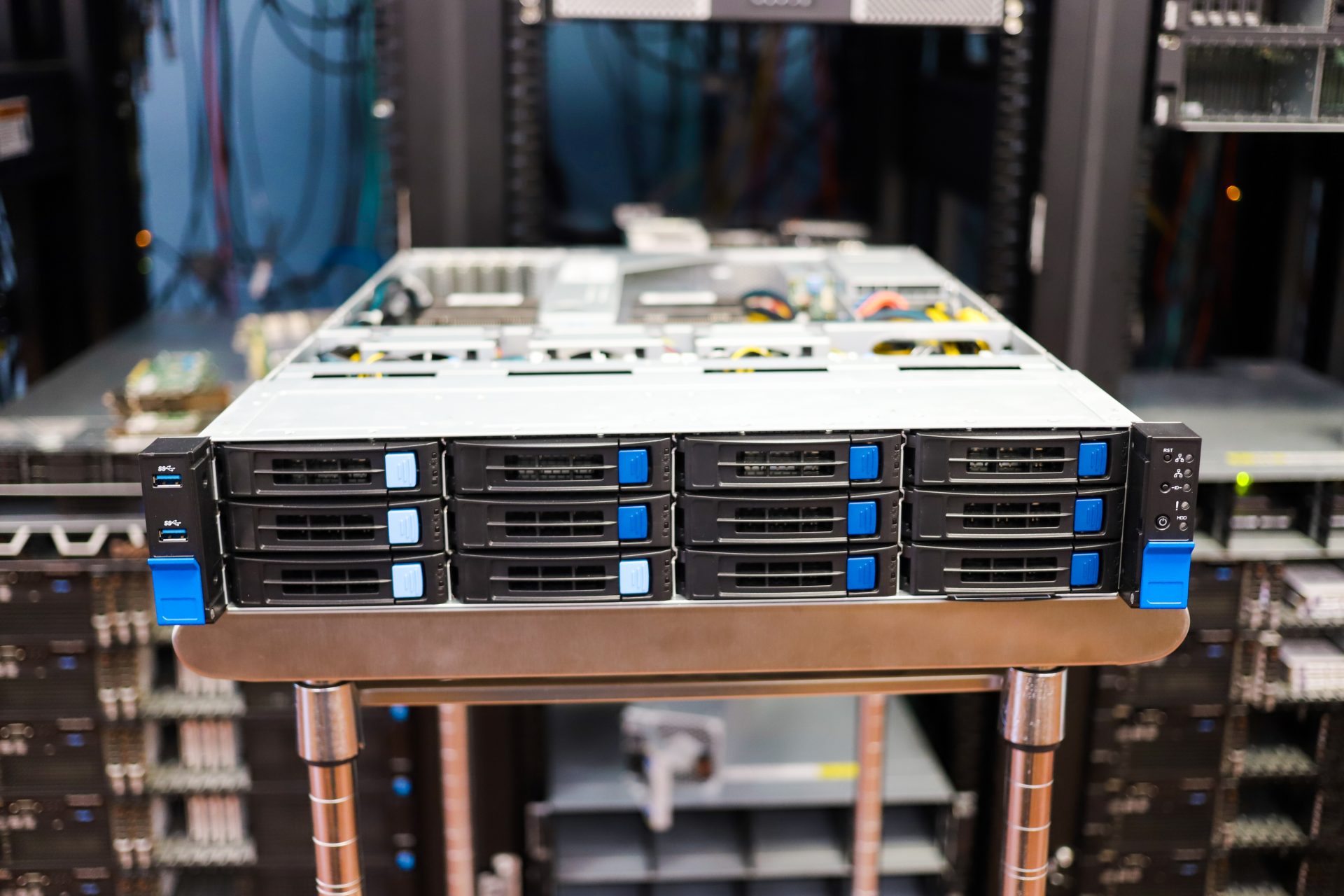 The specifications contain few surprises, which isn’t a bad thing. These 2U, two-socket rackmount servers are datacenter mainstays, offering good value through expansion capability. The Transport SXTS65-B8253’s seven PCIe slots attest to this, three of which are courtesy of a preinstalled riser card. Four of the slots are x16 (three low profile and one full-height/half-length) while the other three are x8 (one low profile and two full-height/half-length). Full-length cards are not supported.

That said, the Transport SX TS65-B8253’s memory expansion is limited to eight DIMM slots for each CPU (16 total); assuming you can afford extremely expensive 256GB DIMMs, the memory ceiling is 4TB. Some competing servers (to be discussed shortly) offer 32 DIMM slots. For our testing, we installed (16) 16GB DDR4-3200 DIMMs for a total of 256GB running in eight-channel mode.

For the OS, the Transport SX TS65-B8253 has two 2.5-inch SFF drives at the rear; the motherboard has no M.2 slots. Its networking ports consist of three GbE ports (one of which is dedicated to IPMI) and two 10GbE ports; the “2T” at the end of our model’s SKU adds the latter. They can be a significant plus since the Transport SX TS65-B8253 lacks an OCP slot; you would need to give up a PCIe slot for additional networking capabilities.

For server management, the Transport SX TS65-B8253 ties into Tyan’s TSM+ web-based suite; see the screenshots below. This is a lightweight suite at best, though not any more so than other white box platforms. To get more featured software, you’ll need to move up to a server brand with more out-of-band management options, although most will come at a higher cost. 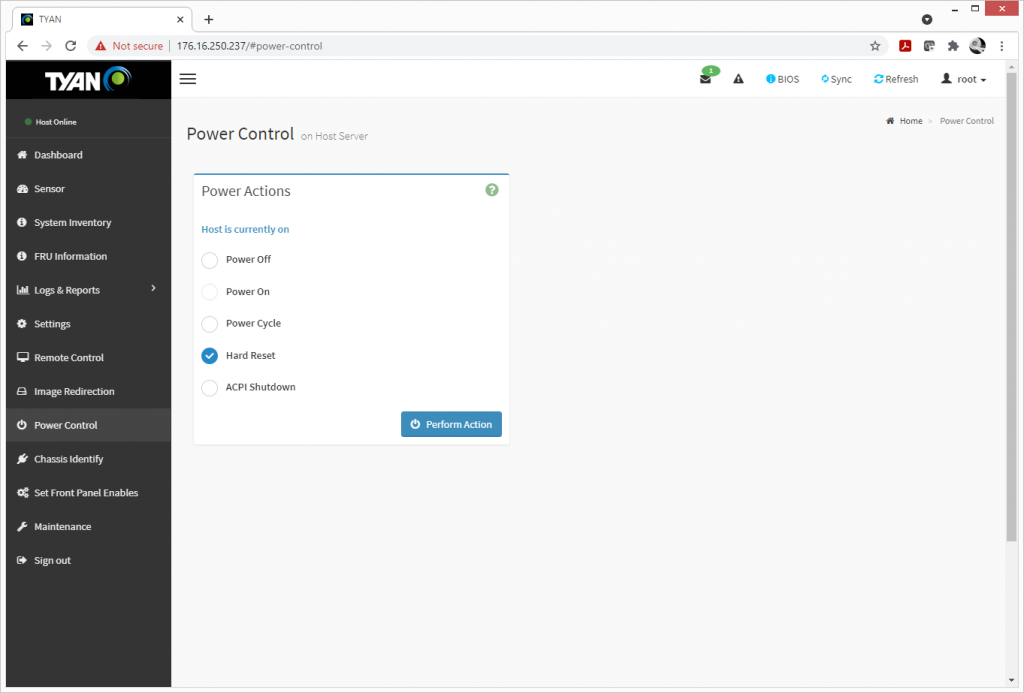 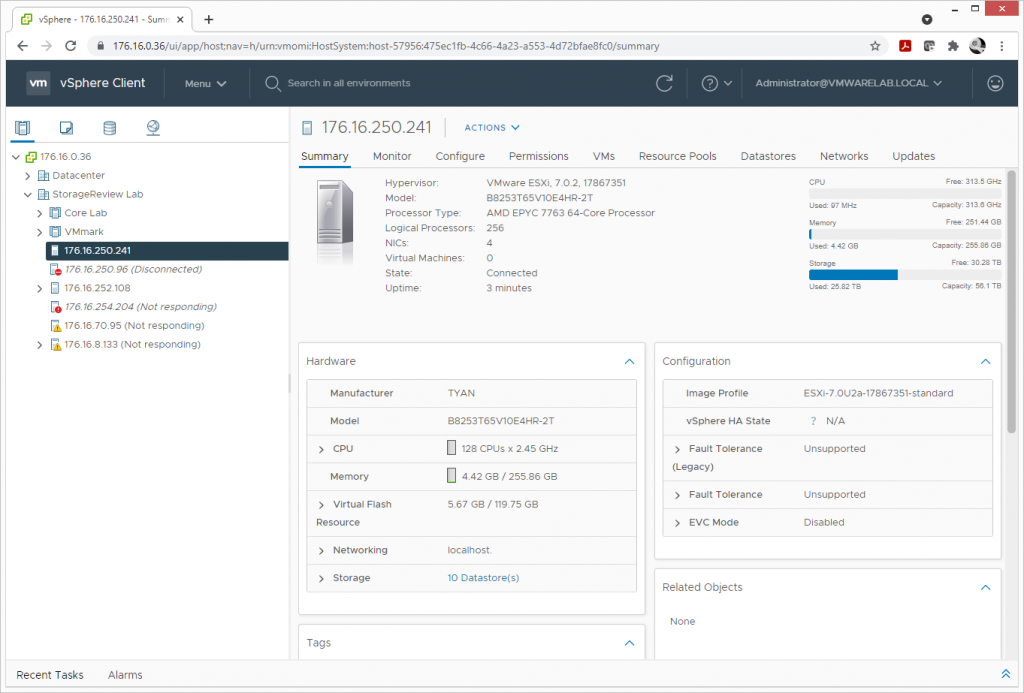 A 2U, two-socket server supporting AMD’s third-generation EPYC processors is a popular offering among blade server makers. To mention a few, Dell’s PowerEdge R7525, HPE’s ProLiant DL385 Gen10, and Gigabyte’s R282-Z96 also support 12 hot-swappable LFF drives like the Transport SX TS65-B8253, though they have twice the DIMM slots (32; 16 per processor). The HPE and Dell both sport one more PCIe slot than the Transport SX TS65-B8253 for a total of eight while the Dell also includes an OCP 3.0 slot. The Gigabyte has just four PCIe slots, though it includes both an OCP 2.0 and an OCP 3.0 slot.

Though that basic hardware rundown ignores finer points, it shows that the Transport SX TS65-B8253 has competitive expansion capability. Its main weakness, as noted, is its support for just 16 DIMMs, but given its cloud storage focus, that is not a major omission.

The TS65-B8253 looks as you would expect a 2U blade server to look. The front panel includes two USB 3.2 Gen 1 Type-A ports and the expected buttons (power, reset, and two UID) and status LEDs. What dominates here is, of course, the 12 LFF bays. 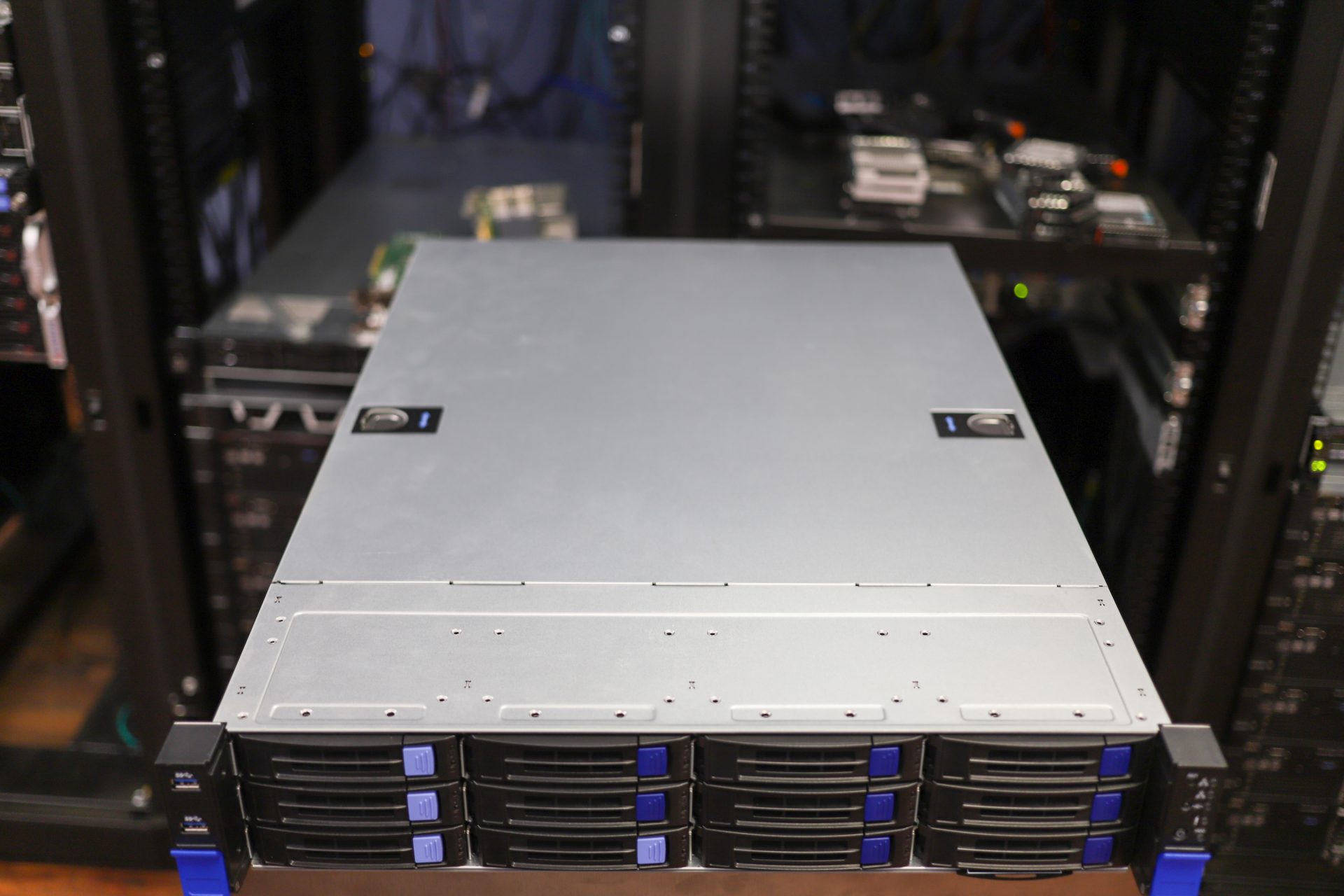 The lighter blue used for the leftmost drive column and the bottom drive in the column second from left indicate the four NVMe U.2-supporting bays. Swapping drives in and out is easy thanks to the toolless caddies. 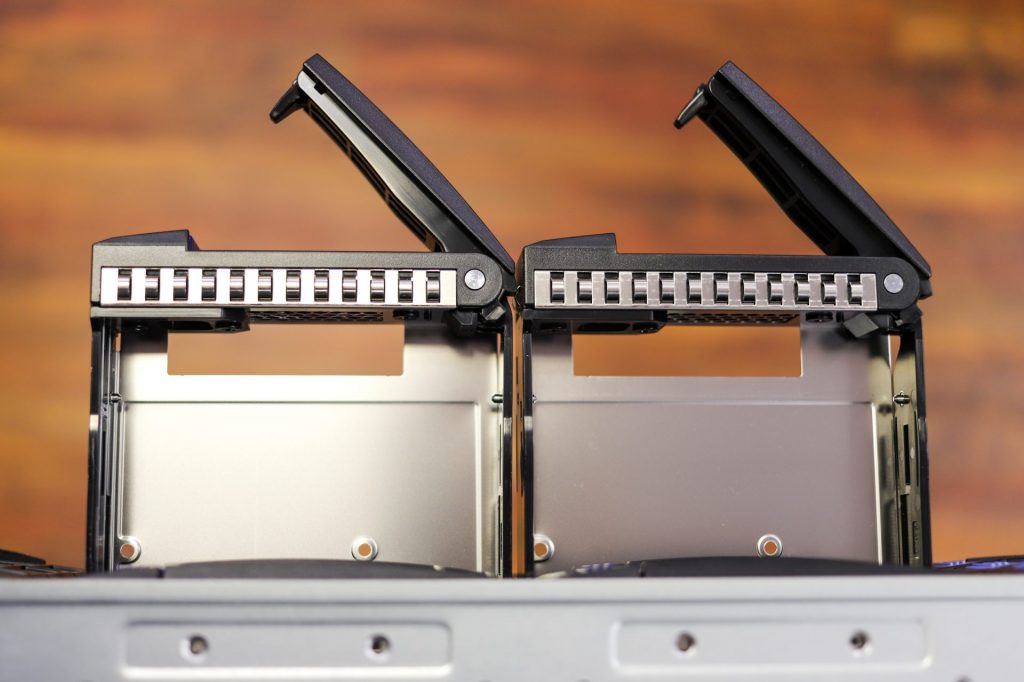 The rear connectivity is also familiar, including two more Type-A ports, VGA video output, a Serial port, and five Ethernet ports – three GbE (one of which, again, is for IPMI) and two 10GbE. 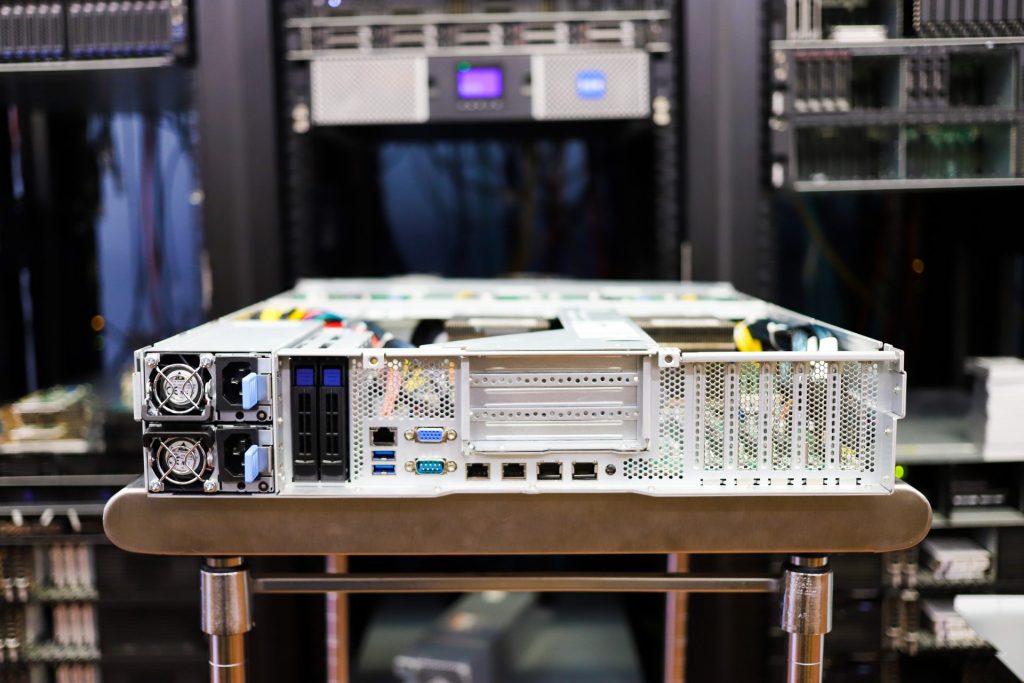 The 1200-watt power supplies are bunched to the left, and next to them are the two 2.5-inch SFF hot-swap bays. As that’s about all there is to see, let’s move inside. The top cover comes off with minimal hassle. The server’s three 80mm fans are immediately visible. They support hot-swapping. 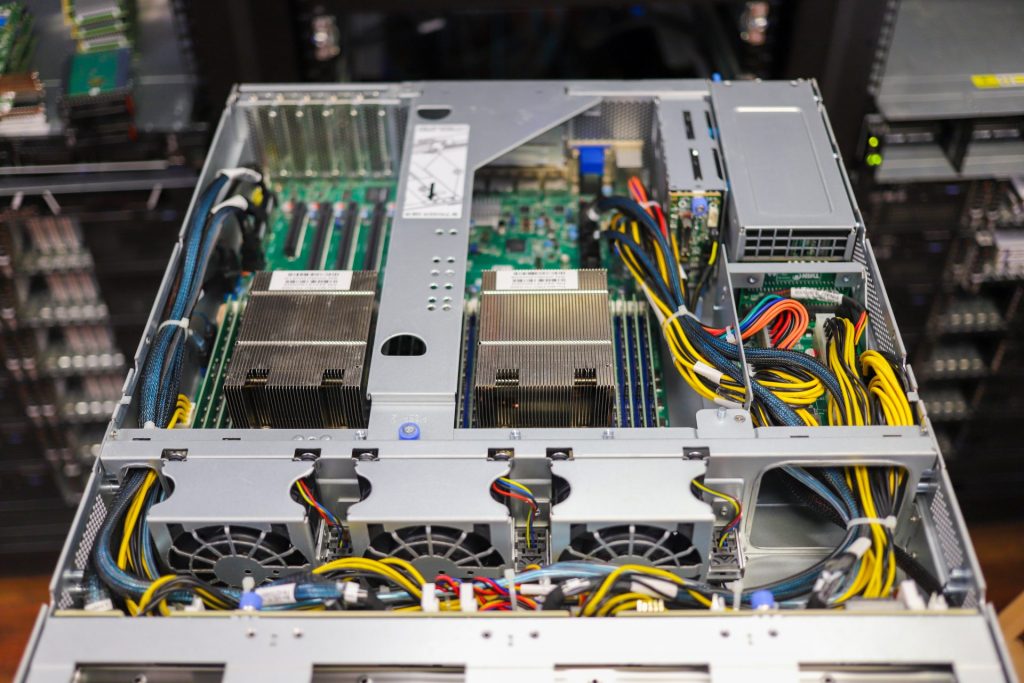 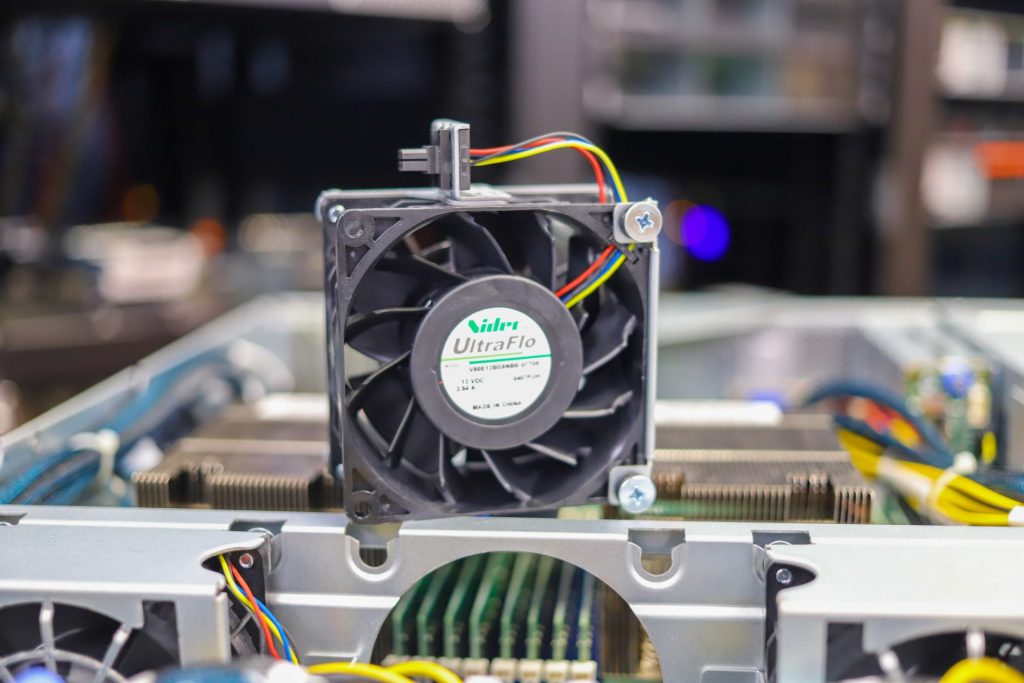 The airflow goes front to back in an admirably straight shot. Its first stop is the two CPU heatsinks. For our testing, we’ve installed two 64-core EPYC 7763 chips. The 16 DIMM slots are predictably divided up into four groups of four, one group on each side of each processor. 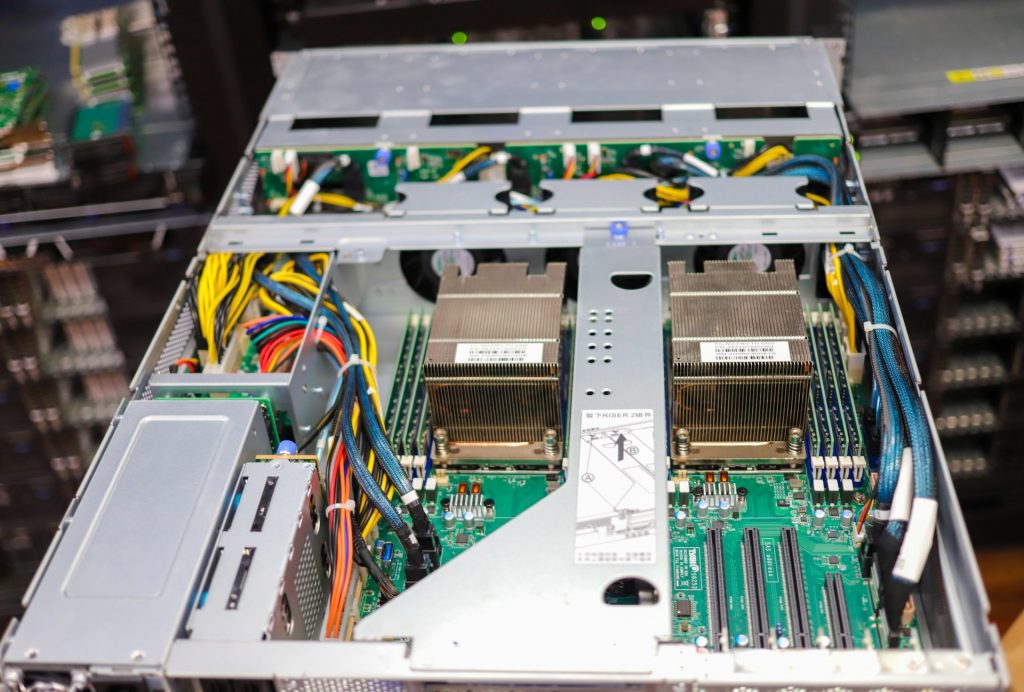 As we get towards the back, the motherboard’s four PCIe Gen4 slots become visible, one of which is x8 while the other three are x16. The remaining three are, as noted before, part of the included riser card just visible at the bottom of this photo. 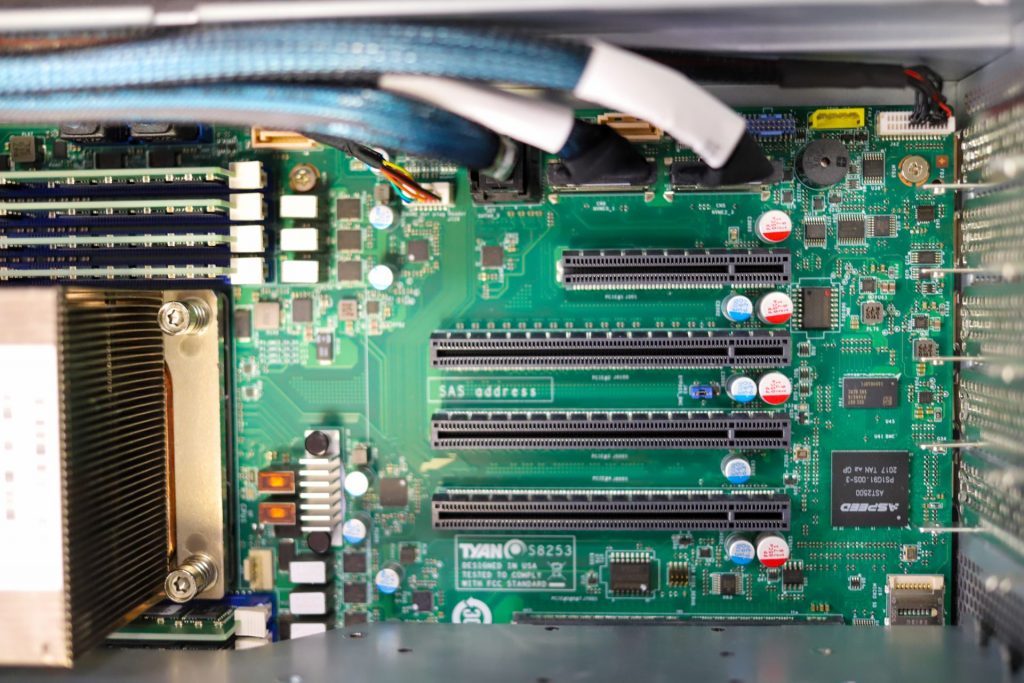 Beyond that, the wiring is neat enough and tied off as appropriate. 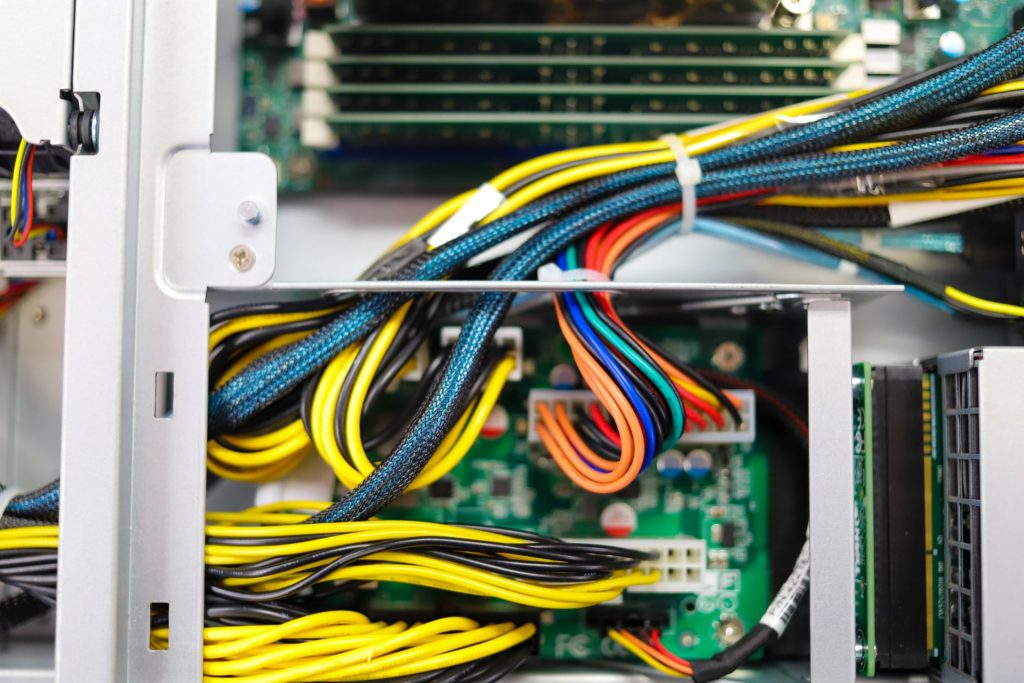 And that completes the tour. Now let’s get to the performance testing, the most important part of this review.

We configured our Transport SX TS65-B8253 with the following components:

We measured an aggregate latency of just 1ms through four VMs from the Transport SX TS65-B8253.

With Sysbench OLTP, we recorded an aggregate score of 27,016 TPS; the VMs ranged from 3,342 TPS to 3,413 TPS, a tight grouping. Ultimately performance was held back slightly with having only 4 NVMe SSDs to drive I/O, although different workloads will have a different balance of storage to compute.

Average latency in Sysbench was also tightly grouped across the eight VMs, ranging from 9.39ms to 9.57ms.

In VDI FC Monday Login, the results look better, starting below 300µs before peaking around 700µs, then dropping down to just over 100µs. The peak 136,382 IOPS occurred at 429µs.

The latency started high in the VDI LC Initial Login, though it leveled out and ended at 94,454 IOPS at 381µs.

The last test is VDI LC Monday Login, where the Transport SX TS65-B8253 again started with a high latency before leveling off, going up once more towards the finish. The highest IOPS were 105,854 at 570µs.

Tyan’s Transport SX TS65-B8253 fills its intended role as a cloud storage server reasonably well. This 2U, two-socket server is based on AMD’s EPYC 7003 processors and supports up to 12 LFF hot-swappable drives, four of which support NVMe U.2. In our review, we noted its clean and easy-to-service design plus all the usual ports, buttons, and LEDs. Its included management software is lightweight but serves essential functions. So it will get the job done in terms of KVM access, remote power controls, and BIOS updates, but won’t do out-of-band management areas such as storage configuration.

One of this server’s potential downsides is that it is not available in an alternative configuration with SFF storage. For that, Tyan has its 2U Transport SX TS65A-B8036, though it only supports one CPU. Another potential downside is that it’s limited to just 16 DIMM slots, though its memory ceiling still tops out at a lofty 4TB assuming you use 256GB DIMMs, not the most inexpensive prospect.  One more is that the Transport SX TS65-B8253 lacks an OCP mezzanine slot, though if you need extra networking ports, it also offers seven PCIe slots. This comes down to chassis optimizations, and the platform was just designed in a way to leverage one interface over another.

For performance testing, we ran the Transport SX TS65-B8253 through our Application Workload Analysis, including SQL Server latency and Sysbench, and VDBench. In SQL Server latency, it returned an aggregate average latency of just 1µs. In Sysbench, we recorded an aggregate 27,016 TPS, a 9.48µs average latency, and a 16.55µs latency in the worst-case 99th percentile test, all very good numbers.

Ultimately, the Tyan Transport SX TS65-B8253’s support for dense storage and two Epyc Gen3 CPUs means it can be a strong performer, indicated with some of its Sysbench performance leftover. The only area holding it back from higher numbers in that test would be more NVMe bays. Tyan went for a compromise of storage density to storage performance with the 12-bay design, which isn’t really a good or bad thing, just something to understand going into it. Overall this makes it a good choice as a cloud storage or big data server with lots of flexibility for performance applications.