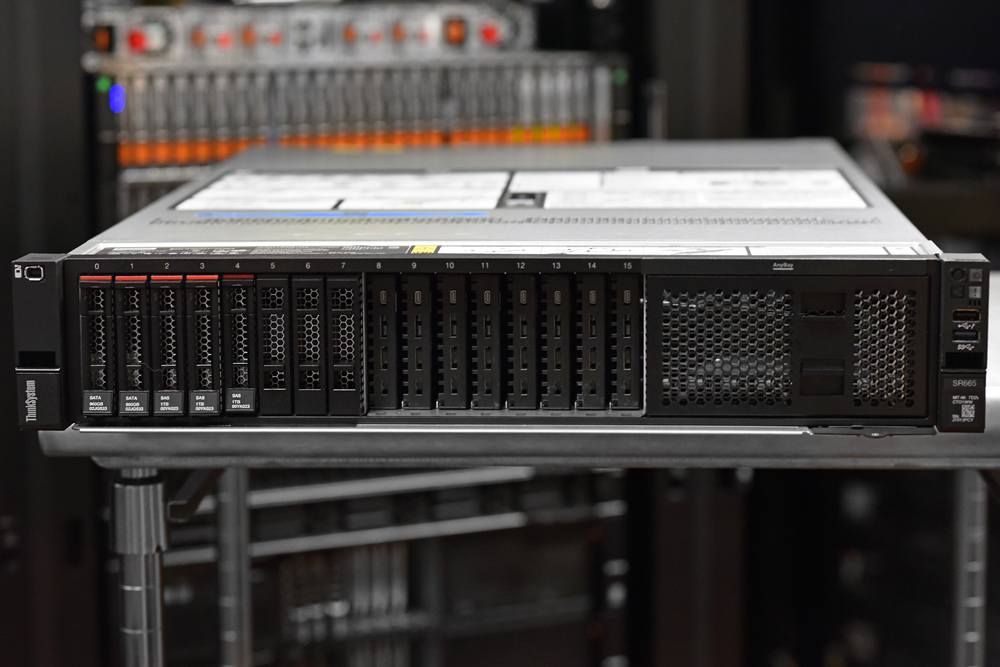 AMD EPYC 7002 brings several benefits over its competitors. Right off the bat, they tend to have more cores and threads and bring more performance. They support faster and more DRAM and support PCIe Gen4 technology (end-to-end in this case) that in turn can bring massive performance increases. The high core count can also help with cost savings for certain licensing models, driving the performance of a dual-socket system with a single CPU or a quad-socket platform with two CPUs. The SR665 takes full advantage of everything above.

Specifically, the Lenovo ThinkSystem SR665 supports CPUs up to 64 cores and 128 threads with core speed up to 3.7GHz. For memory, the SR665 supports up to 32 TruDDR4 memory DIMMs, with 8 memory channels and 2 DIMMs per channel. With 1 DIMM installed per channel (8 DIMMs total), memory operates at up to 3200 MHz. With 2 DIMMs per channel (32 DIMMs total), memory operating at up to 2933 MHz. The server can support up to 4TB of DRAM. For GPUs, the SR665 can support up to 3 double-wide or 8 single-wide GPUs. 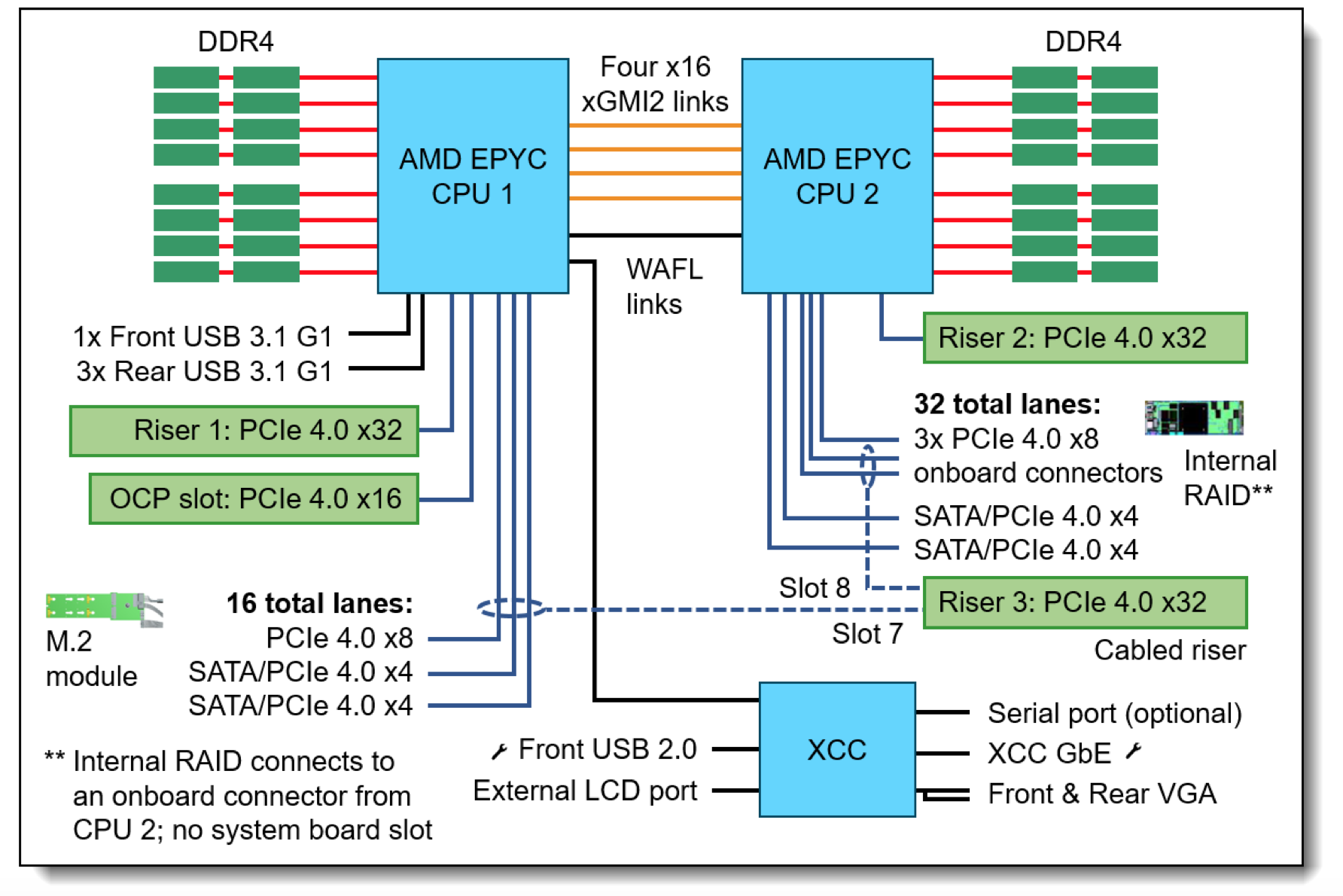 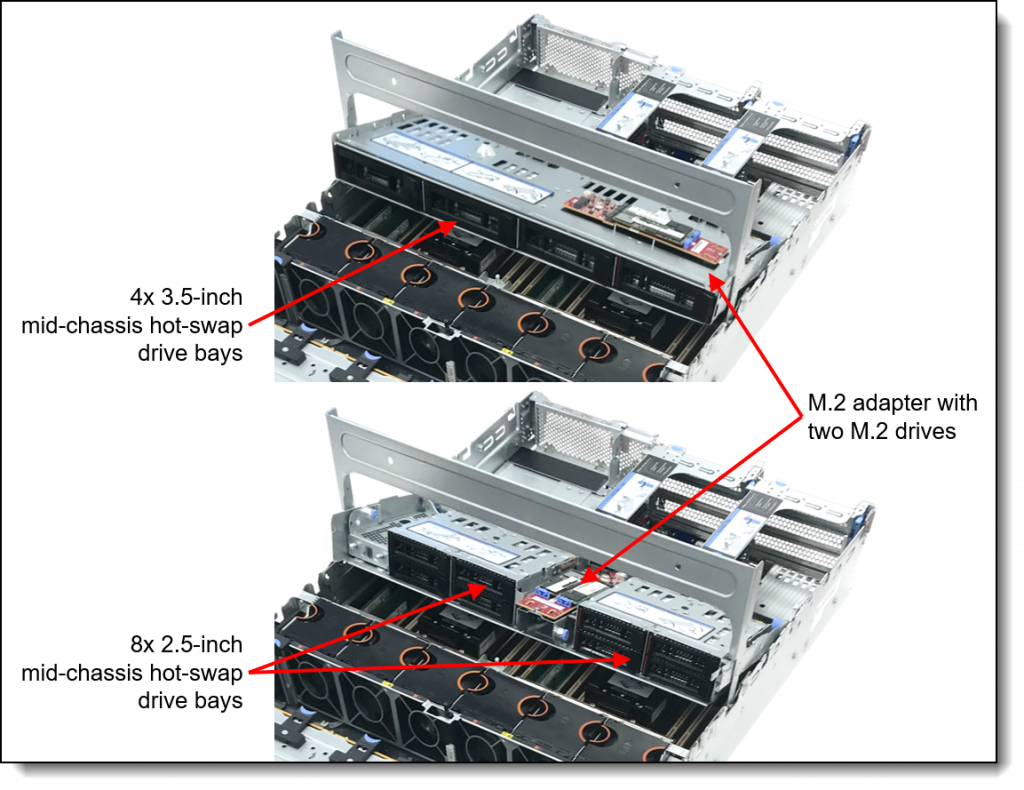 For 2.5-inch drives, the server can support up to 40 through a combination of front, mid, and rear. The server supports up to 16 NMVe SSDs without oversubscription of PCIe lanes and up to 32 with 1:2 oversubscription. Conversely, the SR665 can support up to 20 3.5-inch drives for maximum storage capacity. For M.2, the server supports either one drive or two in RAID1 for boot or data storage. 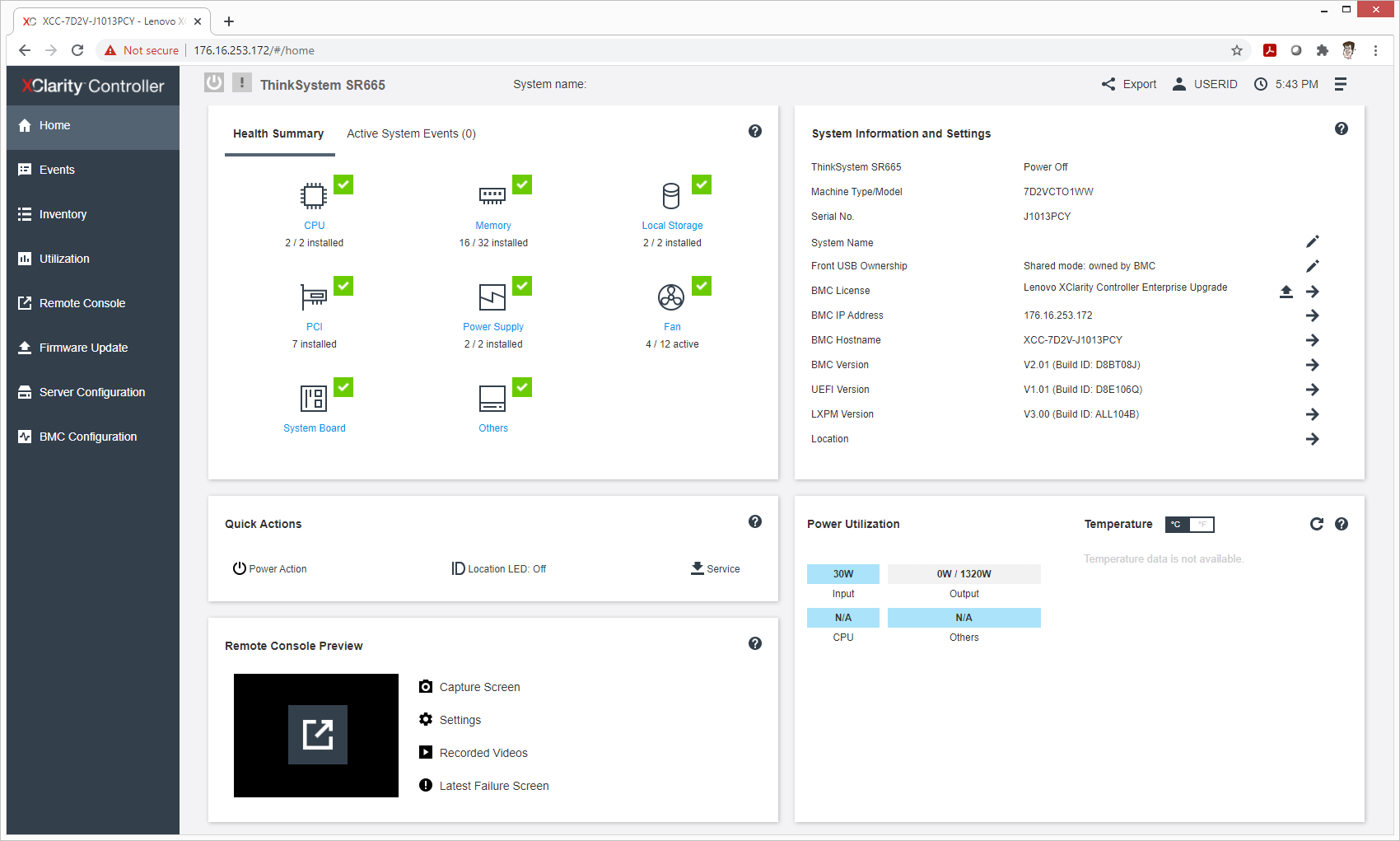 For management, the SR665 uses a combination of Lenovo XClarity management, ThinkShield security features, and Lenovo Services. The idea is to provide powerful, simple, and secure management. We did a fairly deep dive on XClarity linked above, for those looking to learn a bit more.

The Lenovo ThinkSystem SR665 is a 2U server that has the same overall look as all the ThinkSystem portfolio or Lenovo in general, primarily black with red highlights. Across the front of the server as the 24 drive bays. The left side has an external diagnostics port and an optional VGA port. The right side has two USB 3.1 ports, an XXC port, a power button, and indicator lights. 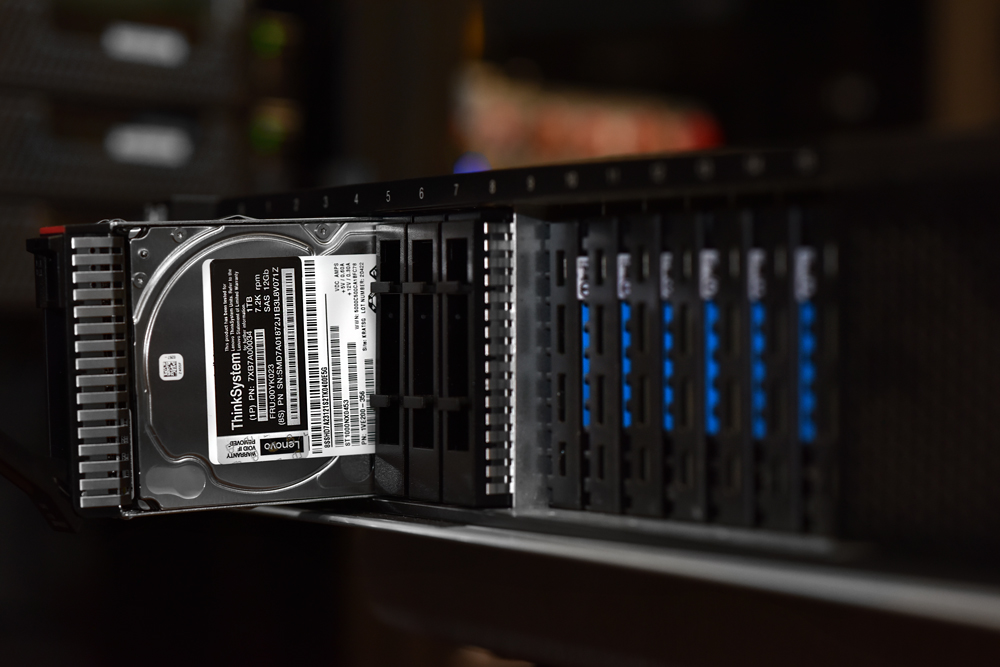 The rear of the device supports up to 8 PCIe slots across the top. Across the bottom is the OCP 3.0 slot, an error LED, a management Ethernet port, Locator LED, an XCC management port, a video port, three more Gen1 USB 3.1 ports, an NMI, and two hot-swappable PSUs. 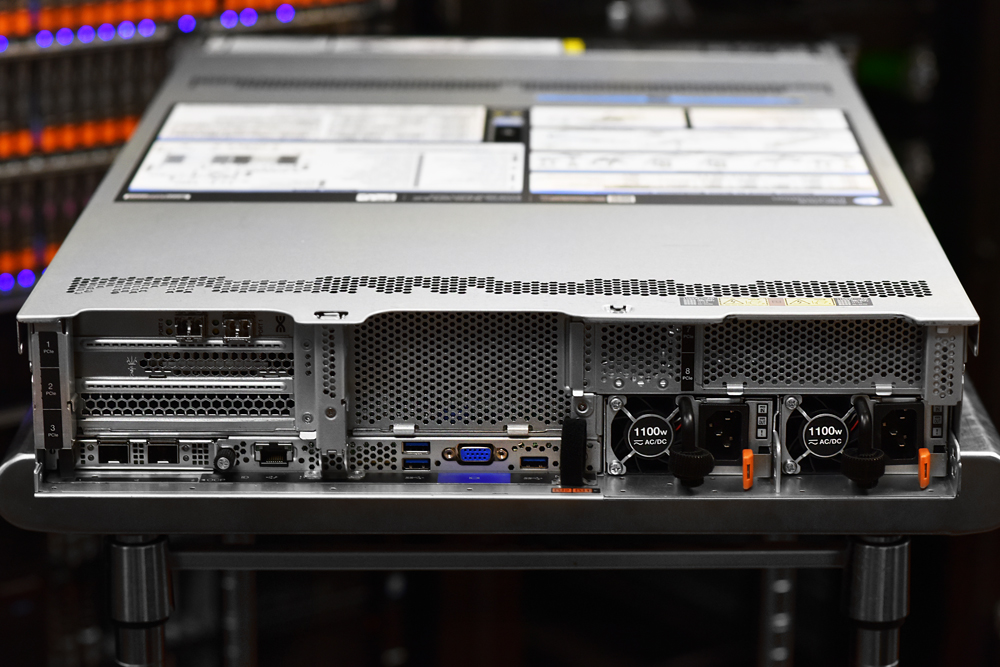 Under the hood, we can see the airflow cover over the two CPUs and RAM DIMMs. In front of them are the fans and behind them are the risers for the PCIe slots. The M.2 boot card and RAID card power backup attach to the top of the cover. 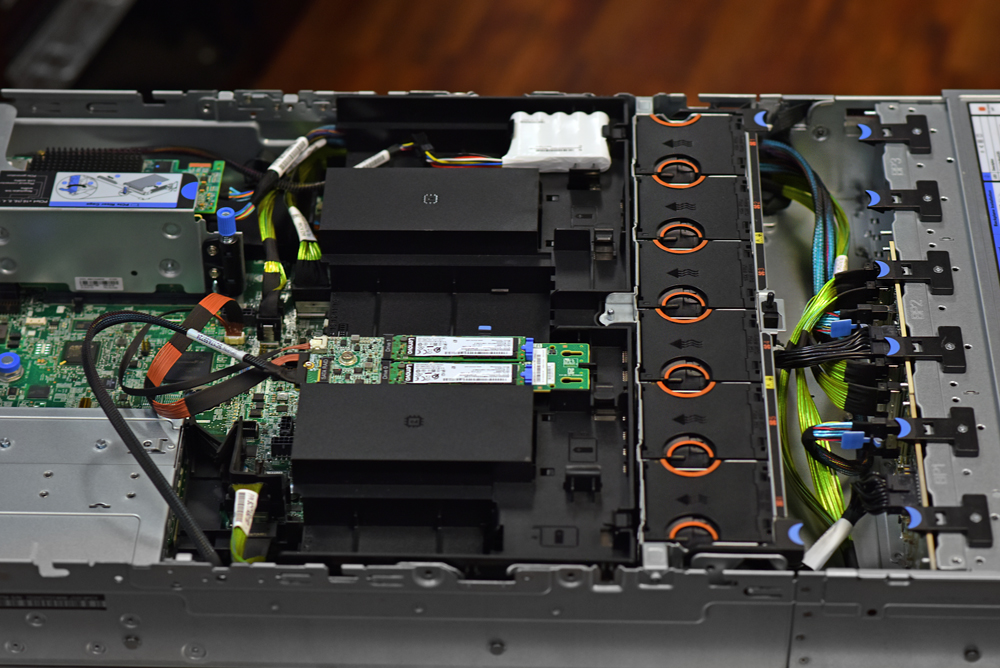 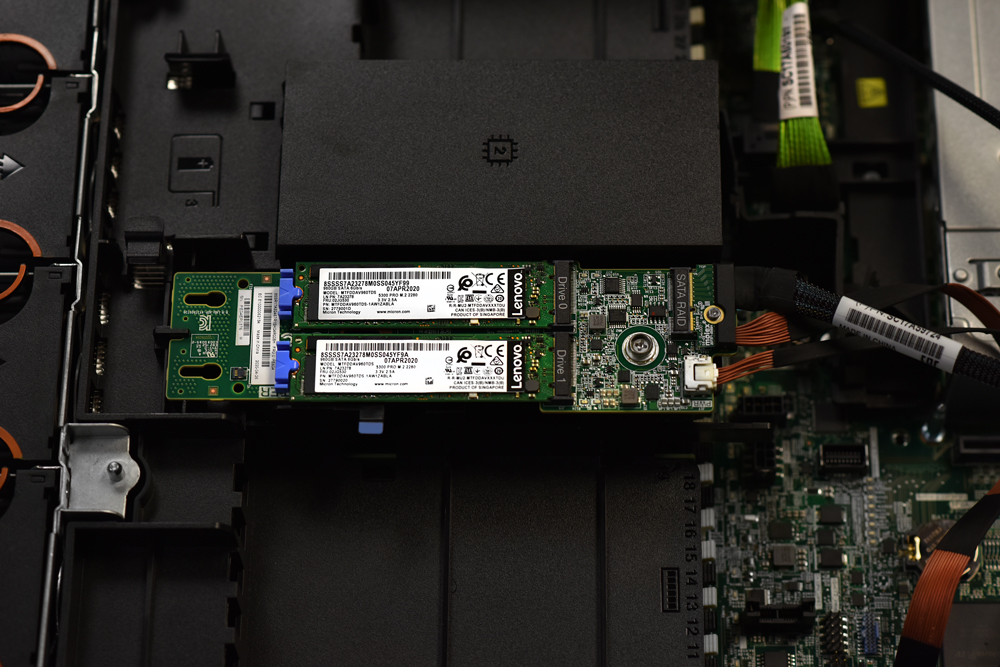 For SQL Server average latency the SR665 had no problem maxing out this workload, with an aggregate of 1ms average and individual VMs of 1ms each.

Here we did a comparison of PCIe Gen3 and Gen4 drives, Micron 9300 vs SK hynix PE8010. Not so much to see which of the drives are better, but instead to see how each type of technology will perform in the server. Visible below are our eight Micron 9300 NVMe SSDs sitting in the SR665 AnyBay slots, with a hard drive above for reference. 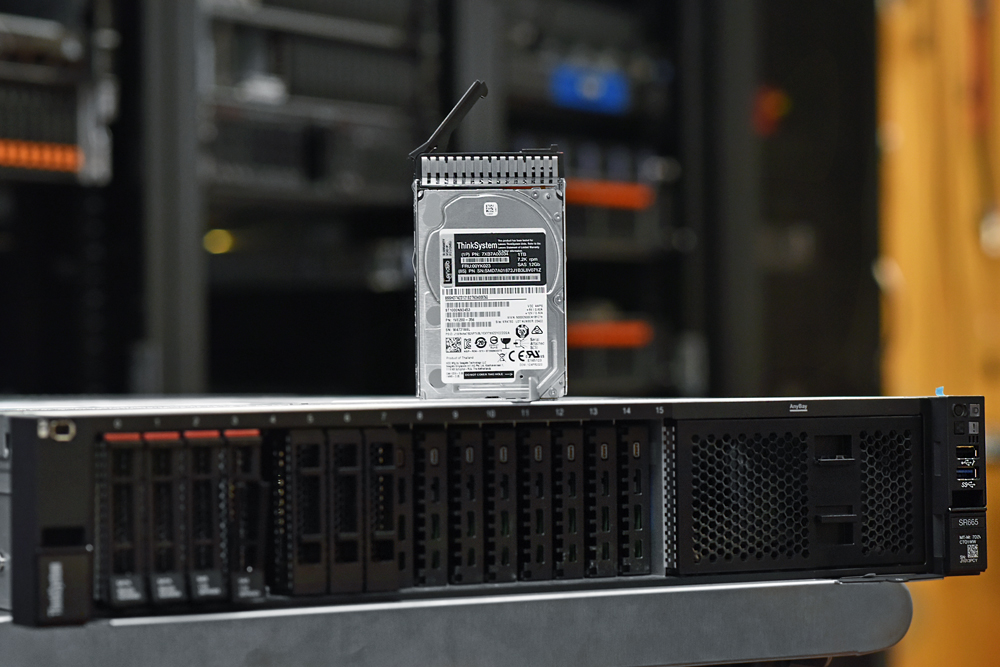 4K random write saw the Gen4 drive perform dramatically better in the SR665 staying under 100µs until roughly 2.6 million IOPS and went on to peak at 2,898,564 IOPS with a latency of 154.4µs. The Gen3 drives saw a peak of about 1.2million IOPS at roughly 200µs before dropping off some.

The Lenovo ThinkSystem SR665 is a 2U server that can house and take advantage of two AMD EPYC Gen2 CPUs. Being an AMD EPYC-based server lends several benefits such as the ability to use PCIe Gen4 technology in storage, GPUs, and FPGAs as well as faster RAM. From a hardware perspective, the server can house up to two AMD EPYC CPUs supporting up to 64 cores and 128 threads with core speed up to 3.7GHz, up to 4TB of RAM (speeds up to 3200 MHz), and has 9 slots for expansion.

The SR665 has lots of storage configurability as well. The server has front, mid, and rear drive bay capabilities and can support up to 40 2.5-inch drives. The server supports NVMe and SATA drives. Leveraging XClarity for management, the SR665 is aimed at Inference, virtualization, VDI, HPC, and Hyperconverged infrastructure use cases.

The Lenovo ThinkSystem SR665 can leverage both PCIe Gen3 and Gen4 devices. This means that users looking to deploy a SR665 in their environments may use one or the other. In order to give a better overall view of how the server works, we put both types of storage in and tested it. To be clear, this isn’t a “which one is better” type of test. While the Gen4 storage isn’t quite saturated with offerings just yet, it is typically faster than Gen3 in nearly every case. So Gen4 will be faster in most instances. However, with both drives tested, users will know what to expect with what type of storage they choose to leverage, e.g., if they are using Gen3 now they will know what to expect and if they change to Gen4 in the future they will know what the results should be.

Before diving into the performance section, it’s important to note that we just scratched the surface of what’s possible with the SR665. We have a 16 bay configuration, supporting only 8 NVMe devices. Lenovo offers many configuration options, including some that go up to 16 NVMe bays. So for even higher potential, you can further spec out this server beyond what we were able to look at.

The Lenovo ThinkSystem SR665 is a highly configurable 2U server that can really bring out the performance capabilities with the AMD EPYC CPUs. Whether users are packing it with PCIe Gen3 or Gen4, they will be impressed with its capabilities.