The Crucial P2 was released, and reviewed by our team, earlier this year. The drive is a standard M.2 NVMe SSD that is aimed at being low-cost with decent performance for entry to mainstream use cases (think email and web browsing). The initial release came in 250GB and 500GB capacities, with more promised to come. Now Crucial released 1TB and 2TB capacities in the P2, the latter of which we will be looking at in this review.

The Crucial P2 was released, and reviewed by our team, earlier this year. The drive is a standard M.2 NVMe SSD that is aimed at being low-cost with decent performance for entry to mainstream use cases (think email and web browsing). The initial release came in 250GB and 500GB capacities, with more promised to come. Now Crucial released 1TB and 2TB capacities in the P2, the latter of which we will be looking at in this review. 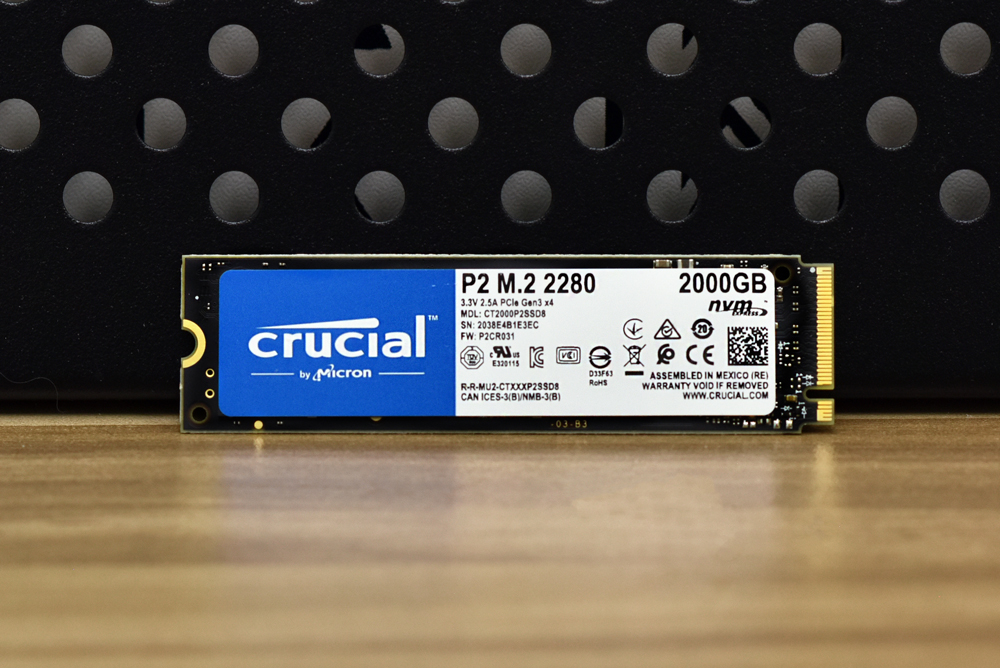 As stated in the previous review, the Crucial P2 is a step up from the company’s P1 line. The 2TB model comes with management software for performance optimization, data security, and firmware updates, as well as Acronis True Image for Crucial, the latter of which allows users to clone drives, and backup operating systems, applications, settings. The biggest difference, aside from more capacity, is higher performance, up to 2.4GB/s read, and higher endurance, up to 600 TBW.

The Crucial P2 2TB comes with a 5-year warranty and can be picked up for $221 today.

Here, we see the Crucial P2 render a score of 3049.673 seconds placing in the bottom third. 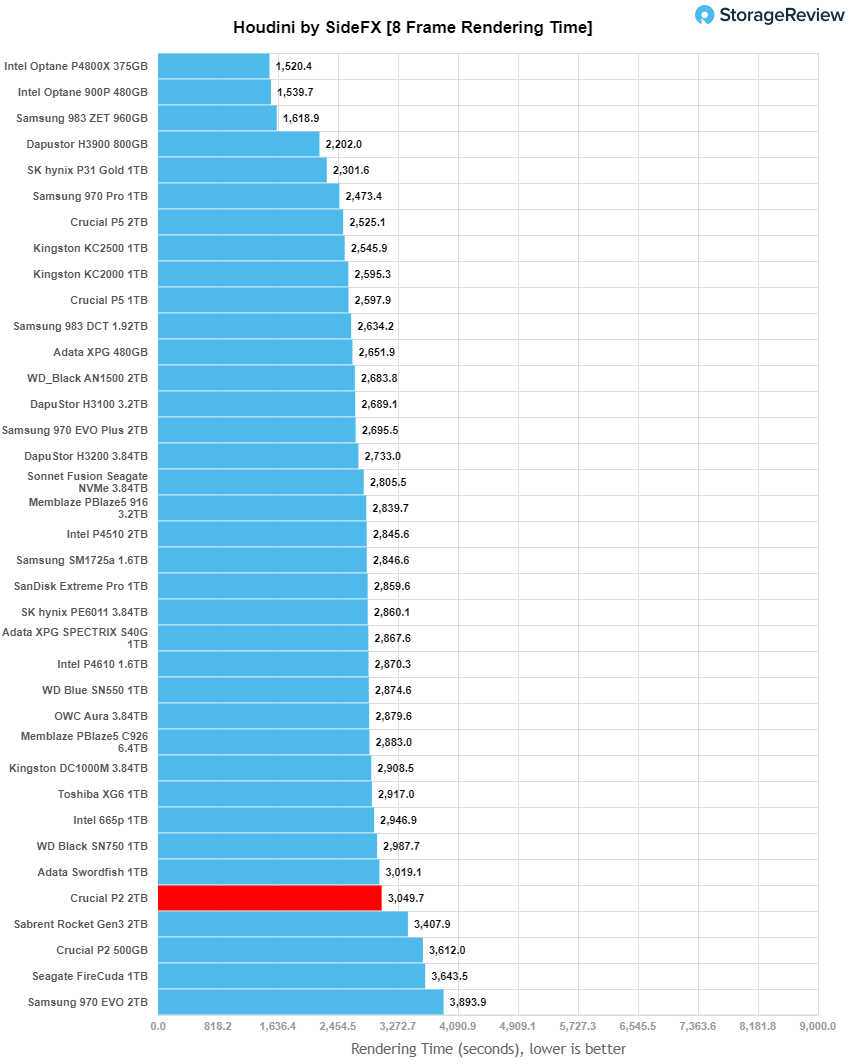 The Crucial P2 2TB had an average latency of 60ms, taking the last place by a large margin. 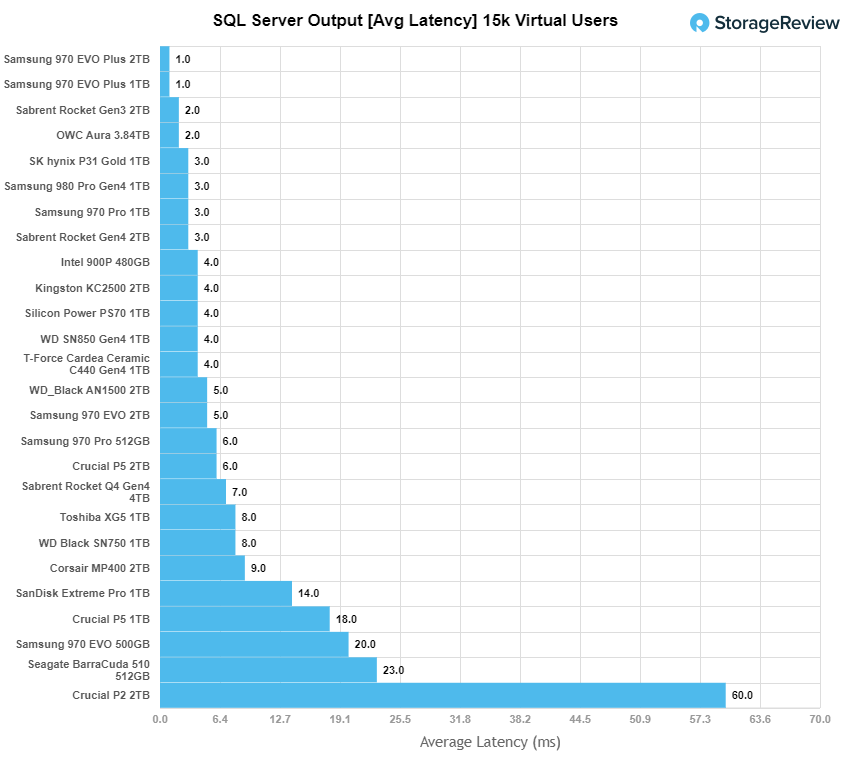 First up is random 4K read. Here the Crucial P2 peaked at 59,408 IOPS at a latency 1.2ms placing way behind the other drives.

4K random write again saw poor performance with the P2 taking last with a peak of only 9,057 IOPS and a latency of 10.5ms.

Switching over to sequential, the Crucial P2 remained its poor performance. In 64K read the drive peaked at 15,264 IOPS or 954MB/s with a latency of 1.1ms.

Next, we looked at our VDI benchmarks, which are designed to tax the drives even further. These tests include Boot, Initial Login, and Monday Login. Looking at the Boot test, the Crucial P2 continued its bad showing peaking at 28,323 IOPS at a latency of 1.2ms, compared to the top performers 138,475 IOPS, the Samsung.

VDI Initial Login the Crucial P2 stayed in the rear spiking latency back and forth. It had a peak of only about 13K IOPS at a latency of roughly 2.3ms, over 5 times the latency of the top performer with that also had over 650K IOPS.

Finally, in our VDI Monday Login, the P2 had a massive latency spike before finishing last with a peak of 3,750 IOPS at 414µs.

The Crucial P2 NVMe is an M.2 form factor SSD (leveraging TLC NAND), that aims to provide good performance at a very nice price point. The drive comes in capacities that range from 250GB to 2TB, reviewed here. The higher capacity offers better performance and endurance but still comes in at a reasonable price.

Looking at performance, this drive did not do well in any test. We ran our SQL Server latency test where the drive hit an average latency of 60ms. In Houdini, it did ok with a score of 3,049.7 seconds. Onto our VDBench, the drive placed last with poor performance and high latency in all tests. Peaks include 59K IOPS for 4K read, 9K IOPS for 4K write, 954MB/s for 64K read, and 126MB/s for 64K write. For our VDI Benchmarks, we saw peaks of 28K IOPS boot, 13K IOPS Initial Login, and 3,750 IOPS Monday Login.

If capacity is one’s main concern and they will only be doing light productivity work, the Crucial P2 (2TB) would be a fine drive. For anyone needing any better performance, there are lots of other options out there.