The NETGEAR Orbi, and its Pro business model, are well-liked here at StorageReview. We have been reviewing models for several years now all with fairly high praise. We reviewed the original tri-band mesh router and the newer WiFi 6 version earlier this year. Today we are looking at the Orbi Pro WiFi 6 Mini or AX1800. This dual-band mesh WiFi router comes in smaller and cheaper, with a lot of the benefits of the larger version.

The NETGEAR Orbi, and its Pro business model, are well-liked here at StorageReview. We have been reviewing models for several years now all with fairly high praise. We reviewed the original tri-band mesh router and the newer WiFi 6 version earlier this year. Today we are looking at the Orbi Pro WiFi 6 Mini or AX1800. This dual-band mesh WiFi router comes in smaller and cheaper, with a lot of the benefits of the larger version. 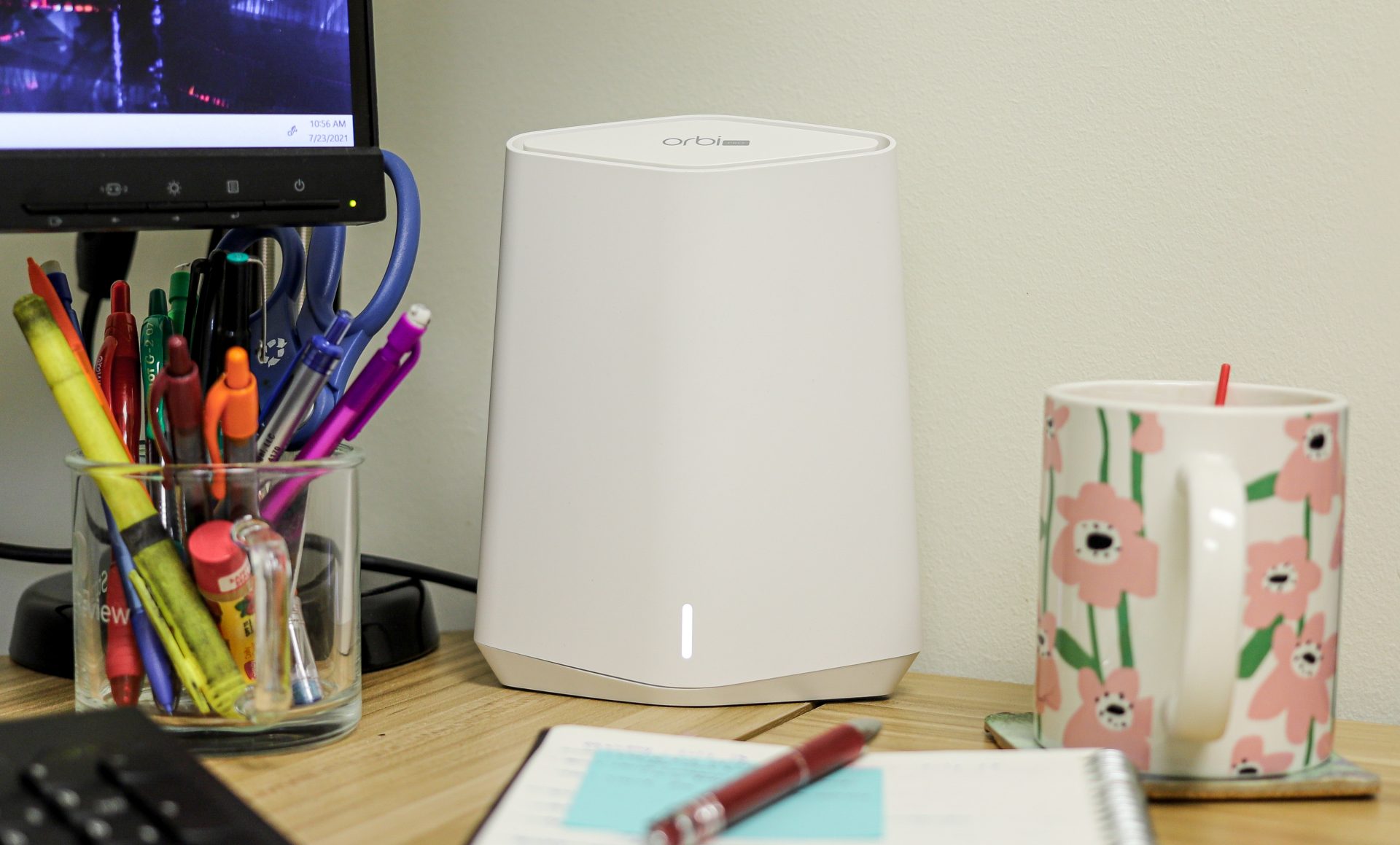 With the previous review, my two biggest gripes were the price and the size. NETGEAR fixed those with this model being 2/3 the size and half the price. With that out of the way, the new system features WiFi 6 and the benefits that come along with that. These include faster theoretical speeds and up to four times as many devices connecting, which is important as everything becomes “smart,” except for people apparently. The mini is backward compatible working with existing WiFi 5 devices. 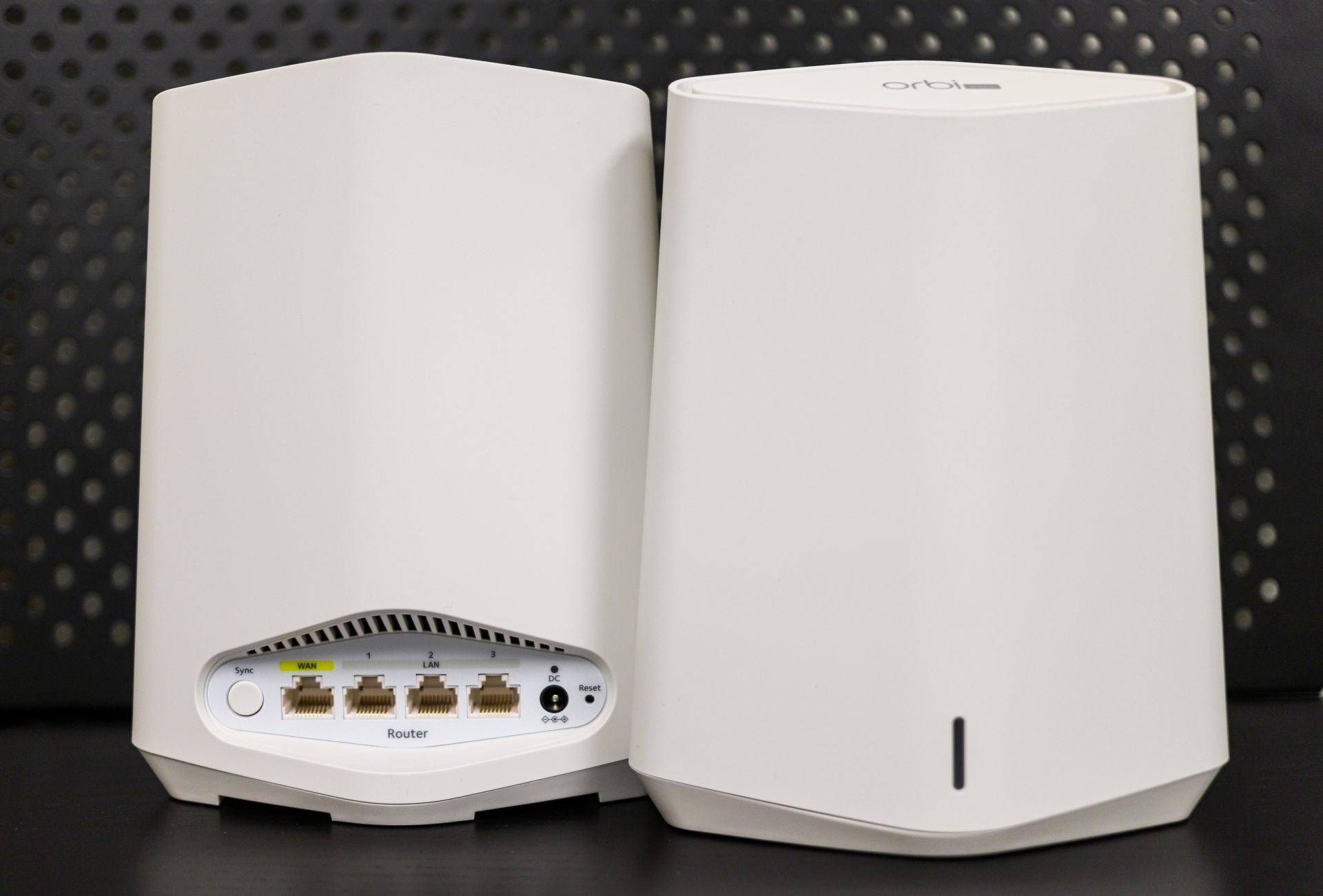 The mesh nature of the device expands coverage throughout the business and it can be expanded further by adding new satellites, at least three more for up to 4,000 square feet. The Orbi Mini comes with a 2.5Gbps Ethernet port but again is limited to the WAN port and can’t be leveraged on the satellite or for 2.5GbE devices. The Mini also has tight security allowing up to four SSID networks including admin, employee device, guest/customer WiFi, and IoT devices. Again, the Orbi Mini is managed through NETGEAR Insight.

The Orbi Pro WiFi 6 Mini comes with a 5-year warranty and can be picked up for $300.

The Orbi Pro WiFi 6 Mini is the mini-me version of the Orbi Pro WiFi 6 It looks almost the same only smaller. Gone are the dark gray highlights on the base and top for a near solid white color. The size of the original Orbis has been a point of contention for some time, as they just take up a lot of room. The mini is a better fit for those that dislike the size of the others. The indicator lights are still on the front. 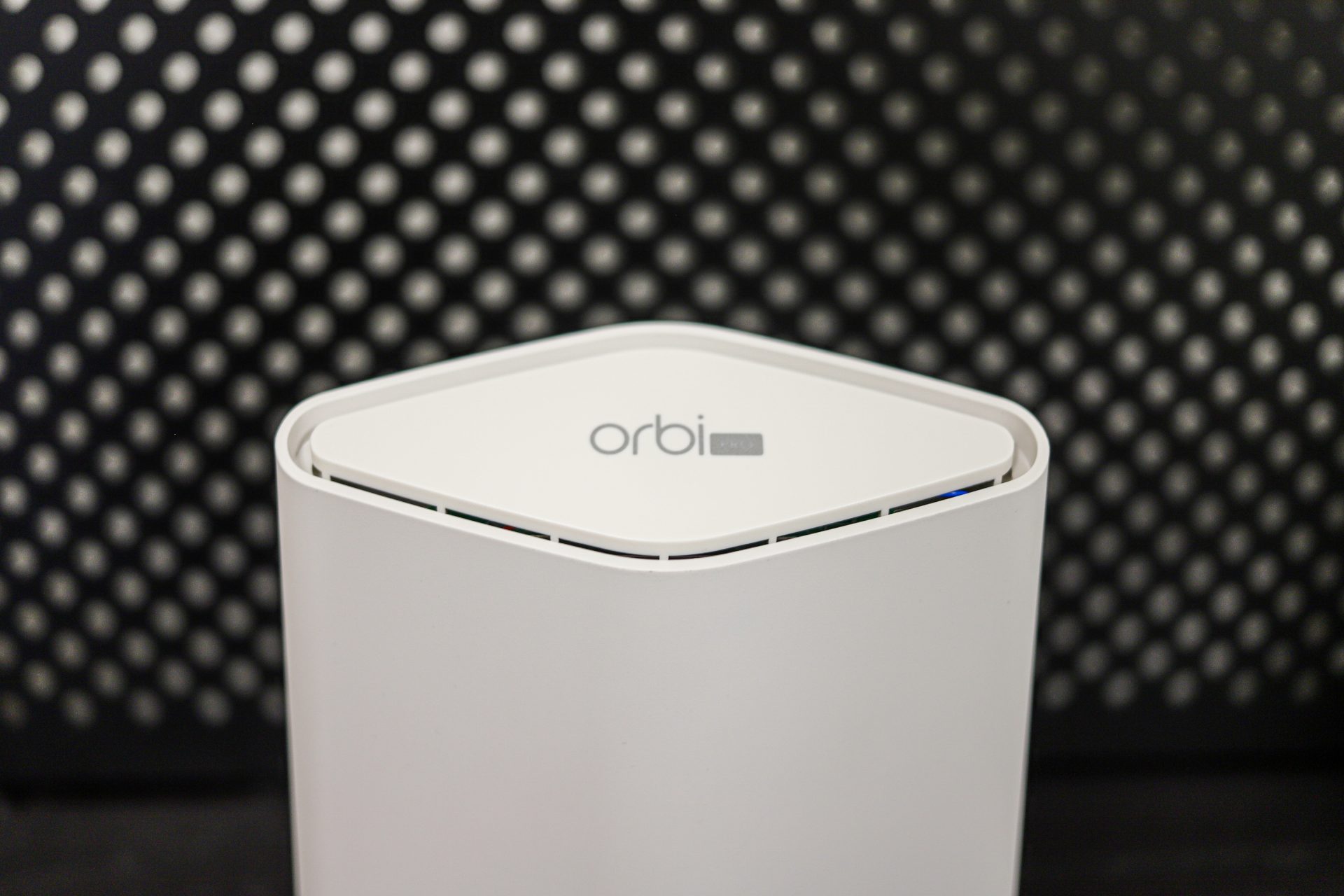 On the rear, the router has a yellow mark on the 2.5Gbps port for where one would connect their Internet into the router. Aside from that, there are three other ports, four on the satellite, then a reset button, and a power outlet. 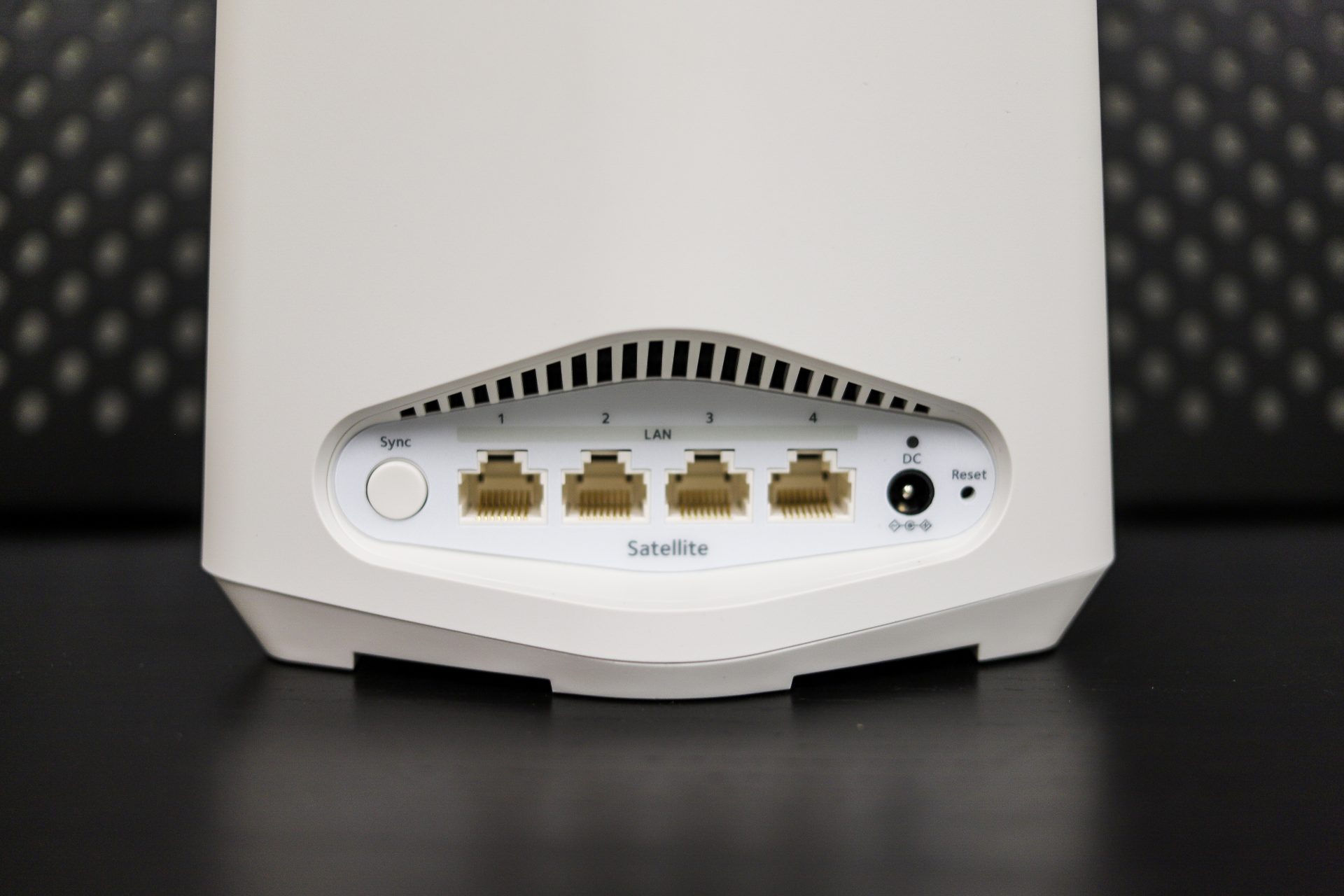 Still the same color pattern for the indicator lights: White pulse while syncing, Blue when good, Amber when satellite connection is not as strong as it could be, and Magenta when something is wrong.

This go-round the router set up immediately. Which was nice, versus the struggle of the normal-sized Pro. Again, everything is managed through the NETGEAR Insight App. This time I didn’t have to do a ton of restarts and move the router and satellite all over the lab.

The router needs to be plugged into both power and internet in the yellow port. From here, you can either scan the network with the App or just pick up the router and scan the QR code on the bottom. Worked like a charm on the first try. The app told me that the router had been found and clicking on it took me to the main Orbi screen below. The router rebooted after an update and then I needed to set up a satellite. I went to the satellite tab and started searching. 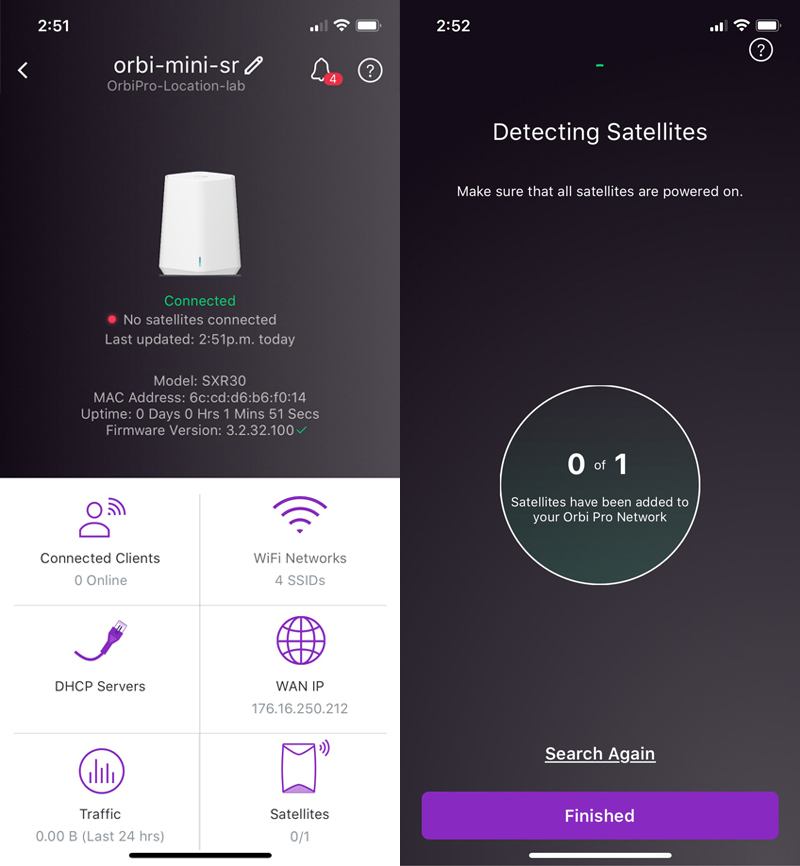 This took a few minutes longer but no intervention on my part. In the satellites tab, we can see the new satellite and its status. Going back to the main screen we see now that there is one satellite online connected to the router. If you want to add more, just repeat the process spacing them out from the router. 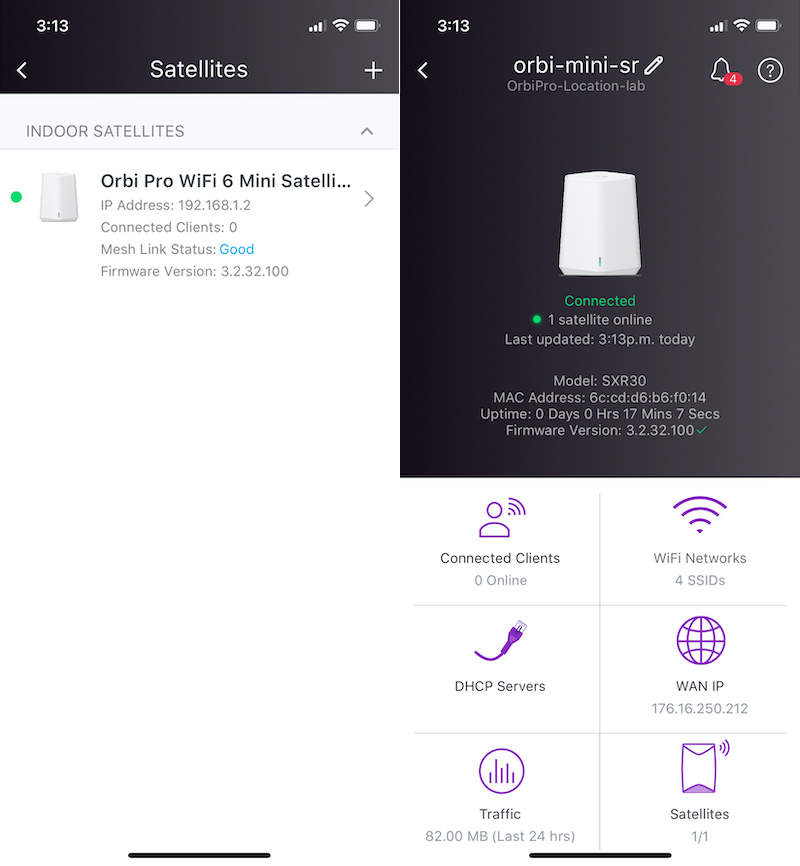 From here you can do things like set up and share your different SSID (recommend for any businesses), rename your network, check the traffic (though at the outset there shouldn’t be much), and other general operational actions. It is really that easy to set up everything. 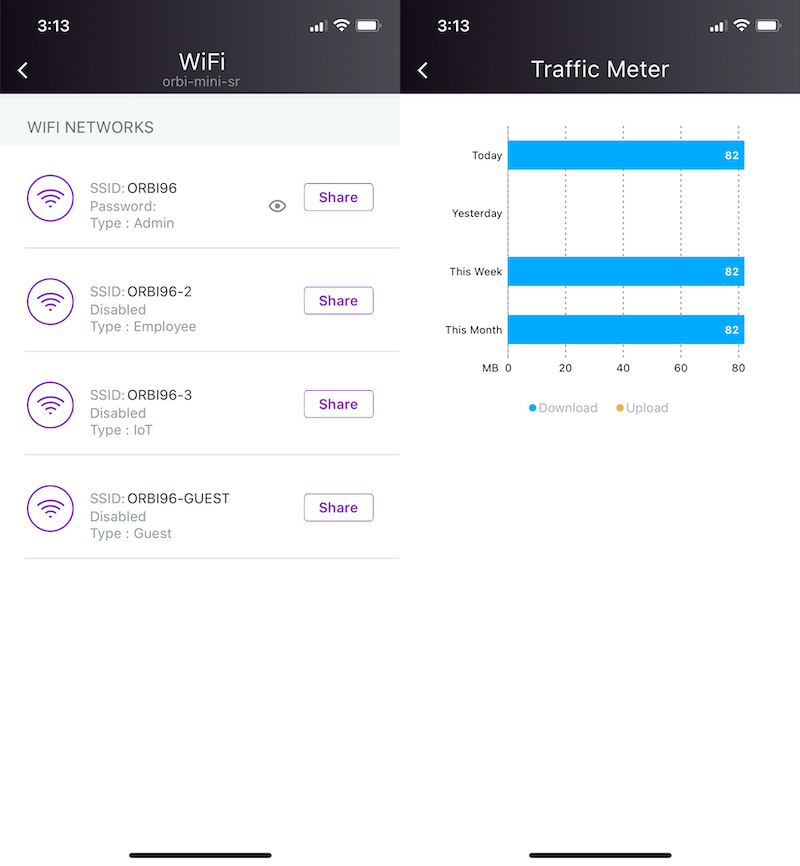 It’s almost as if NETGEAR looked at my last review, noted all my complaints, and fixed them all here with the Orbi Pro WiFi 6 Mini also known as the AX1800. This dual-band mesh WiFi router is smaller, less expensive, and easier to set up than the last one. The router is backward compatible with WiFi 5 so no need to upgrade devices. Businesses can cover up to 4,000 square feet. The Mini also offers tight security with up to four SSID networks including admin, employee device, guest/customer WiFi, and IoT devices.

Just like the other Pro models, the Orbi Pro WiFi 6 Mini is remotely managed through NETGEAR Insight. The biggest difference I saw with this setup was that once the Orbi was plugged in it was found and ready to go. It automatically updated its firmware as well. All of this made the setup so much easier than the normal Pro model. It took about 10 minutes to find/set up the satellite but that was no big deal either. It saw it right away and did whatever voodoo it does behind the scenes. Small businesses that have no dedicated IT resources should have no issue setting up and using this Orbi Mini.

Overall, the Orbi Pro WiFi 6 Mini smoothes out all the rough edges of the Pro, provides adequate coverage and security, and is simple to set up. Small businesses and home offices (or even pro users at home) can find a lot to love here.

How to Get Started with Ansible