Over the past years, we have reviewed half a dozen Intel NUCs – ranging from the very powerful NUC 9 Pro, which is basically a small form factor (SFF) Xeon Powered workstation, to a NUC7CJYS powered by a dual-core Intel Celeron J4005 processor. Now we’re on to something entirely new, the Simply NUC Ruby R8 AMD-powered NUC.

Over the past years, we have reviewed half a dozen Intel NUCs – ranging from the very powerful NUC 9 Pro, which is basically a small form factor (SFF) Xeon Powered workstation, to a NUC7CJYS powered by a dual-core Intel Celeron J4005 processor. Now we’re on to something entirely new, the Simply NUC Ruby R8 AMD-powered NUC.

We have used the NUCs for everything, including as ESXi servers and VDI clients. The last two NUCs we reviewed were the NUC 11 Compute Element and NUC 11 Pro. Both of the NUC 11’s were designed for light gaming, home theater, and content creation. We found either of them would make a small yet powerful desktop replacement. The one thing all the NUC systems have in common is that they are powered and built by Intel. Until recently.

We recently received an AMD Ruby R8 (CMB1r8RB) from Simply NUC, a company that specializes in selling and customizing systems, and we believe that they are one of the largest resellers that specialize in selling SFF systems. Although the system we received looks like and is the same form factor as a NUC, it’s not to be confused with the Intel product.

The Ruby is from Simply NUC’s bespoken line of AMD-powered SFF systems. It was designed as a desktop replacement with a minimal desktop footprint and can be attached to the back of a monitor via a VESA connector. In this review, we will take a close look at the Ruby R8, including its configurations and specs, and discuss the benchmarking tests we ran on the system and how it compares to comparable NUCs that we have reviewed. 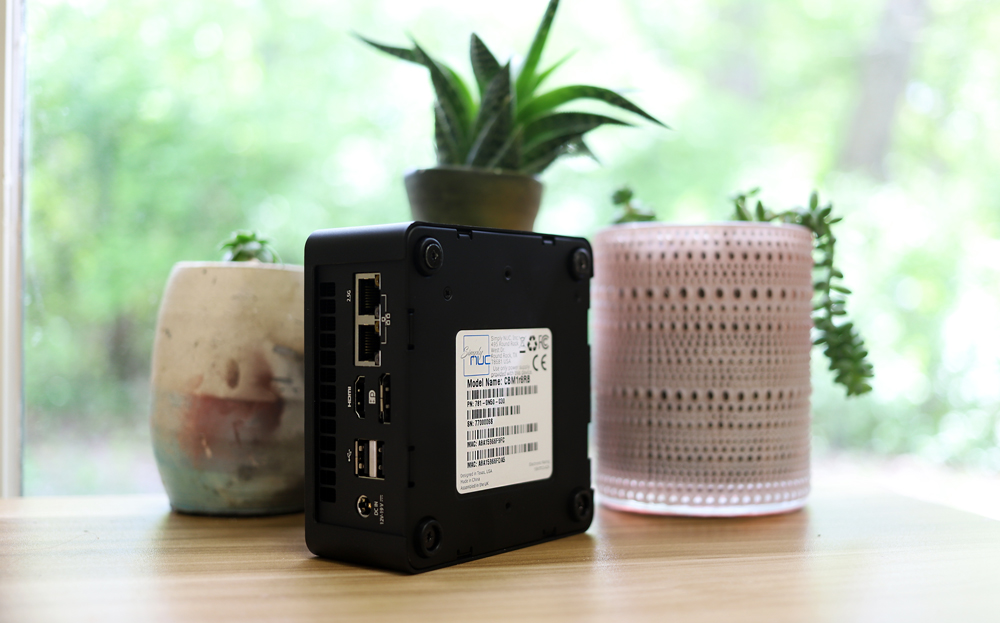 The photo below shows how similar in size and construction the Ruby is to an Intel NUC 8, 9, and 10. 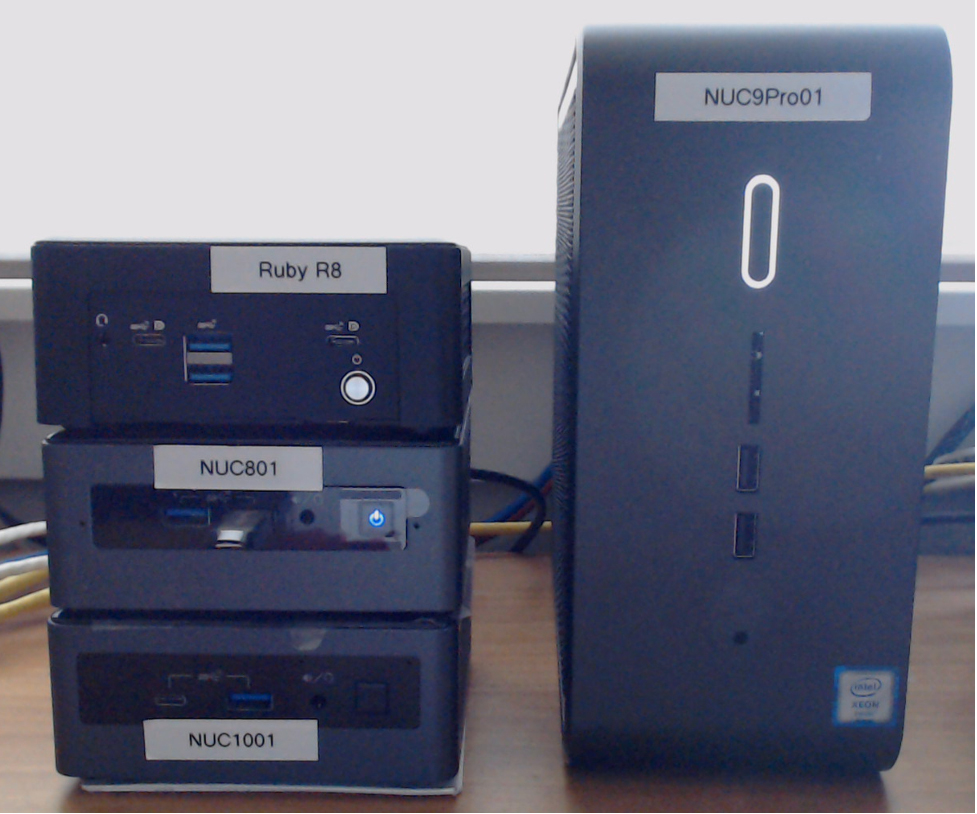 Below are specifications for the Ruby R8 that we will be reviewing:

We received our Ruby in a white 5” x 7.5” x 4.5” white box emblazoned with “Simply NUC. THINK BIG, go mini.” After removing the top of the box, we found the computer, a VESA mounting plate with screws, an external power supply, as well as a quick start.

On the rear of the device are an HDMI, DisplayPort, ports, two USB 2.0 ports, a 1GBE, 2.5Gbe, and the electric power inlet. 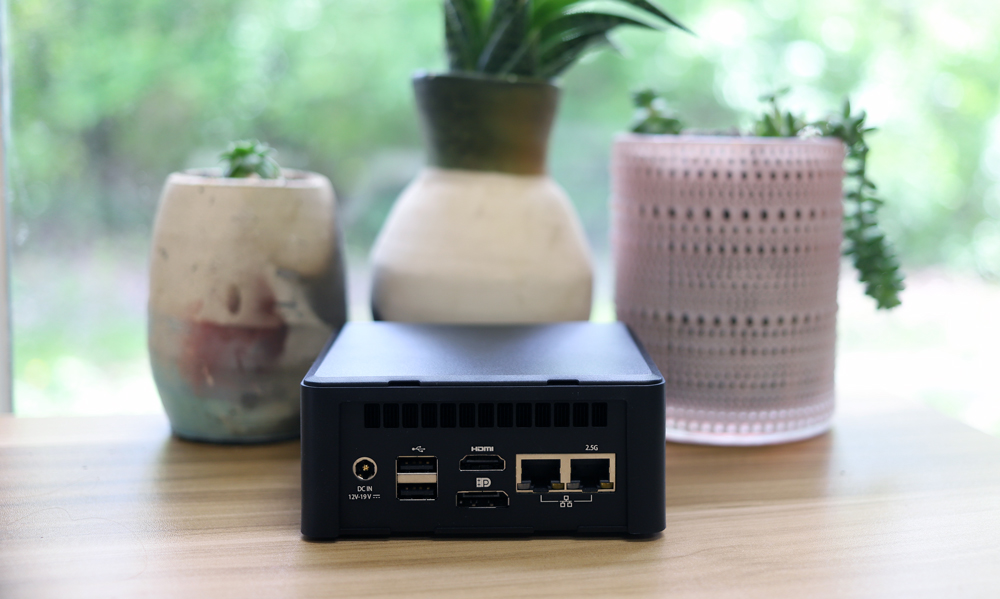 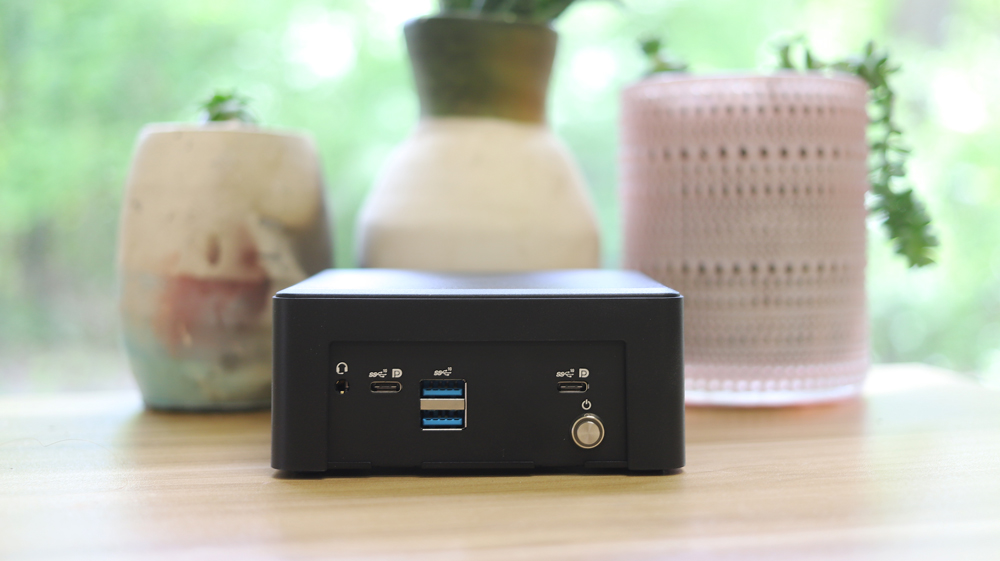 The sides and top of the device’s case are made of black plastic with ventilation holes on the two sides. The bottom is made of metal and has a threaded hole where its VESA mount can be attached. The top of the device has a slight indentation and can easily be pried off. Overall, the case on this device is durable and should hold up well for home, office, or edge deployments.

The bottom of the case is attached by four captive Phillips-head screws. By removing these screws, you will expose the motherboard, attached to the base is a daughterboard for a SATA M.2, that was unpopulated. 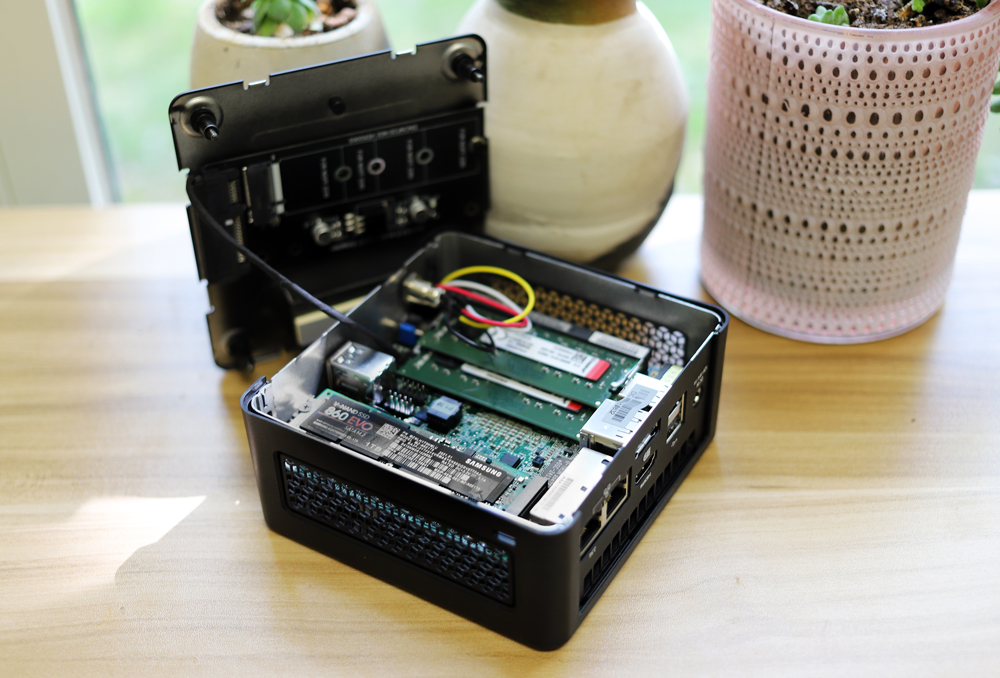 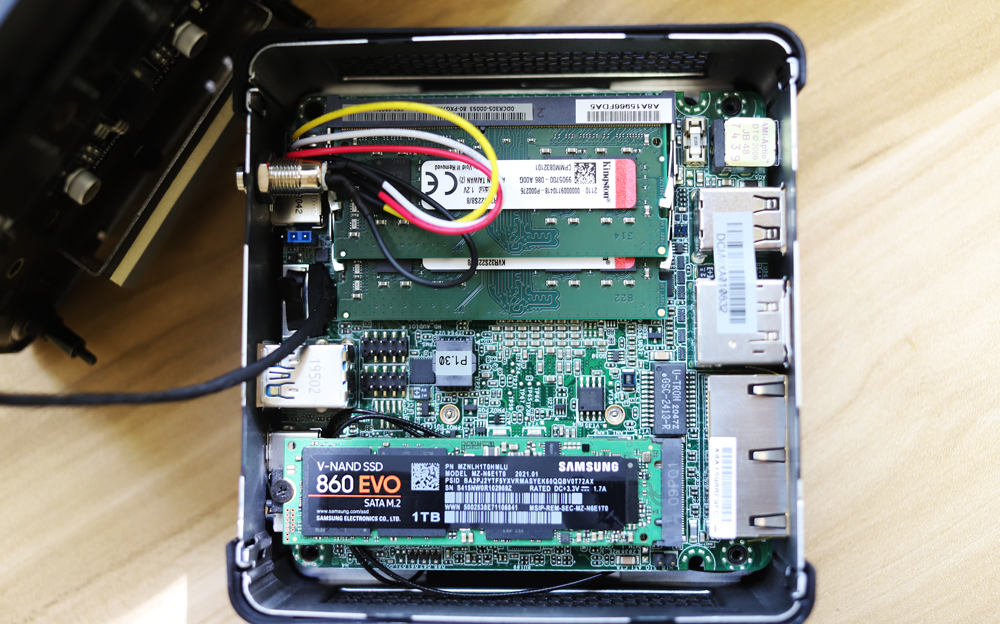 The unit has a single AMD Ryzen 7 4800U processor that was launched in Q2 of 2020. This CPU is a 64-bit eight-core mobile x64 microprocessor based on 7nm Xen 2 microarchitecture, with 8MB L3 cache and 4MB L2 cache. It supports hyper-threading, meaning that a total of 16 threads can be running at a given time. The processor operates at a nominal speed of 1.8 GHz with a Max boost of up to 4.2 GHz. It has a Thermal Design Power (TDP) rating of 24 W and supports up to 64 GB of dual-channel DDR4-3200 memory.

The CPU has an integrated Radeon RX Vega 8 integrated graphics card with 8 CUs and up to 1750 MHz. The GPU has 8 cores.

The WLAN is an Intel Wi-Fi 6 AX200 that is capable of transfer rates of up to 2.4 Gbps. Since this is a module, and not soldered into the motherboard, it can be replaced if desired.

For the initial boot and testing of the device, we connected it to a Dell UltraSharp 32” 4K Monitor (U3219Q) via HDMI. The Dell monitor has a keyboard, mouse, and video (KVM) switch built into it, which proved extremely useful throughout our testing as it allowed us to switch between the device and our laptop with the push of a button. We plugged a Dell wireless keyboard and mouse (part number KM636) dongle into the monitor’s upstream USB port.

We booted up the system and were presented with the Windows 10 Pro (20H2 build 19042.867) installation wizard. It took less than five minutes to install Windows and have the system running. We then updated Windows Pro and the AMD BIOS and drivers to the latest versions. 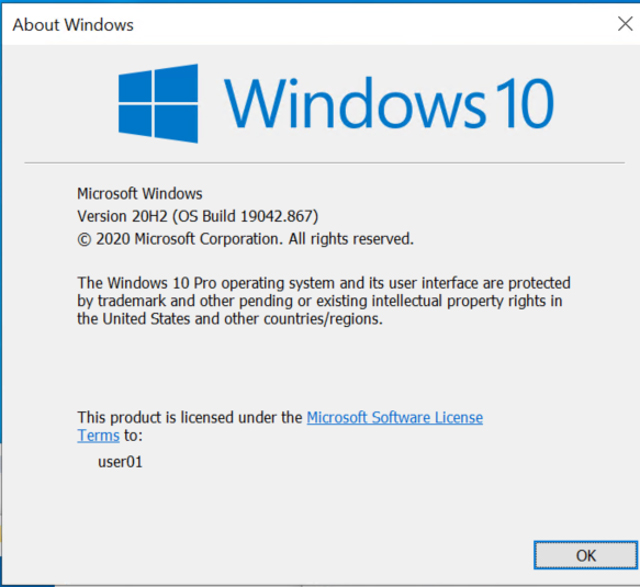 This is the second SFF system that we received with a 2.5GbE NIC in it. We were curious as to how well it would perform. We connected the two systems together using a MikroTik CRS305-1G-4S+IN 10GbE 5-Port Desktop Switch using Cat 6 cables.

We then used iperf3 to test the bandwidth between the two systems. I first connected the systems through a 10GbE switch. The results showed a transfer rate of 2.36 Gbps.

To evaluate the device’s performance, we ran benchmarking tests on it and then compared the results to the Intel NUCs that fit in the same category as the Ruby R8; the NUC 8, NUC 10, NUC 11 Compute Element, and NUC 11 Pro. We excluded the NUC 9 Pro from the results as it is a workstation-class machine and has a different form factor than the other systems.

The results from our tests indicate that the Ruby with its 8 cores was faster than all the NUC systems other than the NUC 11 CE which has an 11th generation i7 processor.

Overall, the results are aligned with what we expected to see with this system, as systems with more and faster cores, should perform better.

We ran the SPECviewperf 12 benchmark on the Ruby R8. The SPECviewperf 12, considered to be the worldwide standard for measuring graphics performance based on professional applications, runs 9 benchmarks called viewsets, which represent graphics content and behavior from actual applications, and include categories such as: 3D Max, CATIA, Creo, Energy, Maya, Medical, Showcase, Siemens NX, and Solidworks. 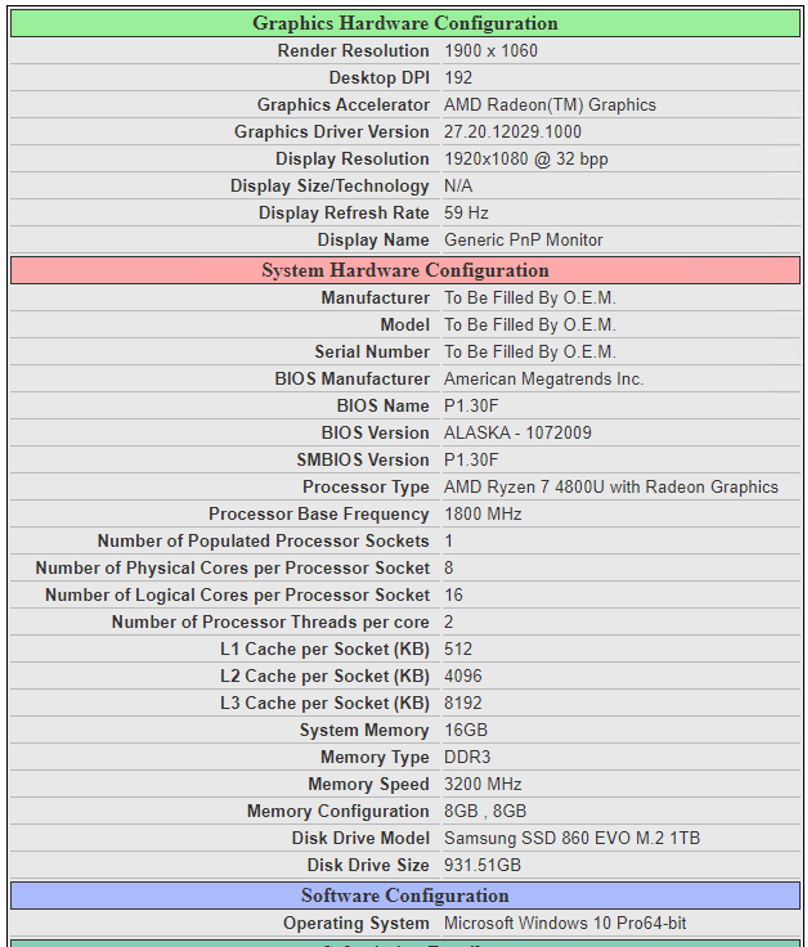 This test really highlights the 8 cores in the Ruby R8 as in some tests it was more performant than the NUC 11 CE in some tests and slightly lagged it. The R8 had outstanding performance in the Siemens NX (SNX) test which fully utilized the 8 cores in the R8.  Both of the NUC 11’s have Iris iGPU’s in them which helped in graphics-intensive workloads despite them having fewer CPU cores than the Ruby R8.

Many of these applications have not been optimized to take advantage of the multi-core CPUs or GPUs that modern systems have. This is shown by the score where the Ruby R8 with its 8-core CPU was slightly beaten by the NUC 11 CE system even though it had twice as many CPU cores as it.

Invariably, the AMD-powered Ruby R8 will be compared to Intel NUC systems, as these NUCs were designed for similar use cases. Below is a comparison of the key hardware components of all of these systems.

This is the first NUC-sized system we have reviewed that contains an AMD processor and Radeon Vega 8 iGPU. The AMD Ryzen 7 4800U performed very well in our benchmark tests, equaling the performance of the Intel processor-based systems that we have tested in the past. When compared to systems with an Iris Xe iGPU, the Radeon Vega 8 performed admirably and is in the same class as the Iris XE. Both are solid graphic processors for casual gamers and are perfectly suitable for everyday use with home and office applications. If you are interested, you can read our evaluation of the Iris XE for gaming.

The Ruby R8 does have very good connectivity with its USB port assortment. For storage, it supports an M.2 2240 SATA/NVMe slot which would be good for a boot device, and a PCIe Gen4 x4 m.2 2280 slot for high-performance storage. With its 2.5GbE, 1GbE wired and 2.4MbE wireless network connectivity will not be a problem even for high bandwidth applications.

Overall, this system is comparable in performance to the NUC 11 systems that we recently tested. It is well-suited for home and office power-users who use common office applications, do demanding web-browsing, and moderate content-creation but want, or need, a computer that they can attach to the back of a monitor or that takes up a minimal amount of desktop real estate. We are pleased to see that companies like SimplyNUC are releasing SFF computers with AMD processors that are worthy competitors to Intel NUC’s.