The 980 PRO is Samsung’s top-shelf consumer PCIe 4.0 SSD, with read speeds up to 7GB/s and write up to 5GB/s. As we already reviewed this drive, this article focuses on the PlayStation 5-compatible heatsink version, and how it compares to the non-heatsink version under sustained load. In short, if you’re upgrading your PS5’s storage, the 980 PRO with heatsink is a fine choice, well worth the slight premium over the non-heatsink drive.

The 980 PRO is Samsung’s top-shelf consumer PCIe 4.0 SSD, with read speeds up to 7GB/s and write up to 5GB/s. As we already reviewed this drive, this article focuses on the PlayStation 5-compatible heatsink version, and how it compares to the non-heatsink version under sustained load. In short, if you’re upgrading your PS5’s storage, the 980 PRO with heatsink is a fine choice, well worth the slight premium over the non-heatsink drive.

The Samsung 980 PRO with heatsink is available in 1TB and 2TB capacities for $189 and $349, nominal premiums of $20 and $21 over the non-heatsink drives. That’s high-end PCIe 4.0 SSD pricing, but per our reviews, it’s an excellent performer and worth the money. We observed that the 2TB version had slightly lower latency and much better write speeds (4.34GB/s versus 2.85GB/s in BlackMagic). Icing on the cake is that the 2TB version gives you slightly more storage for the money. 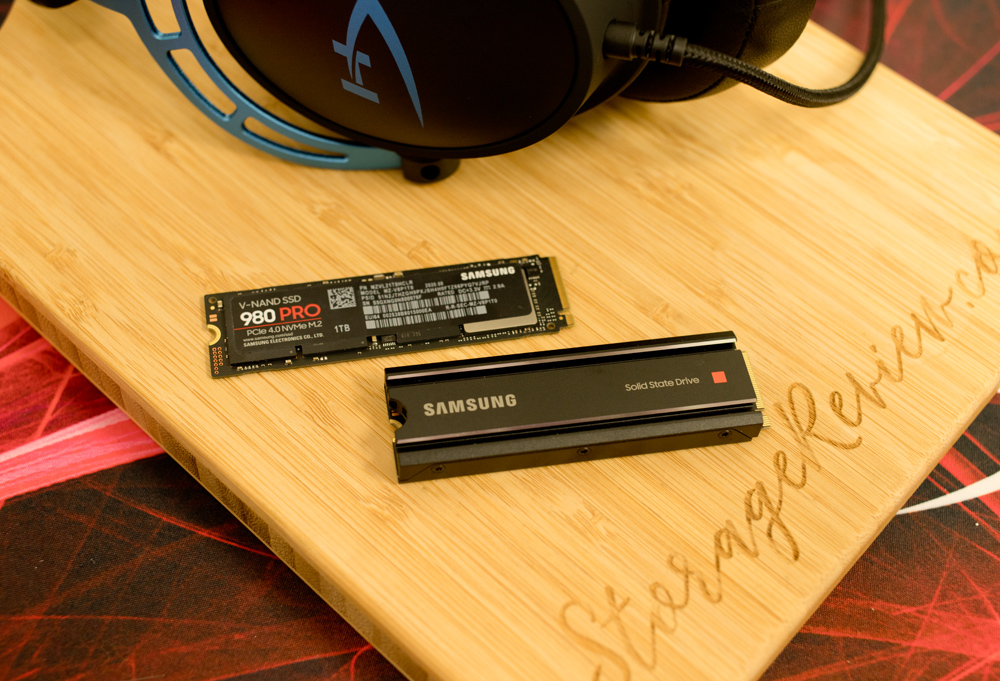 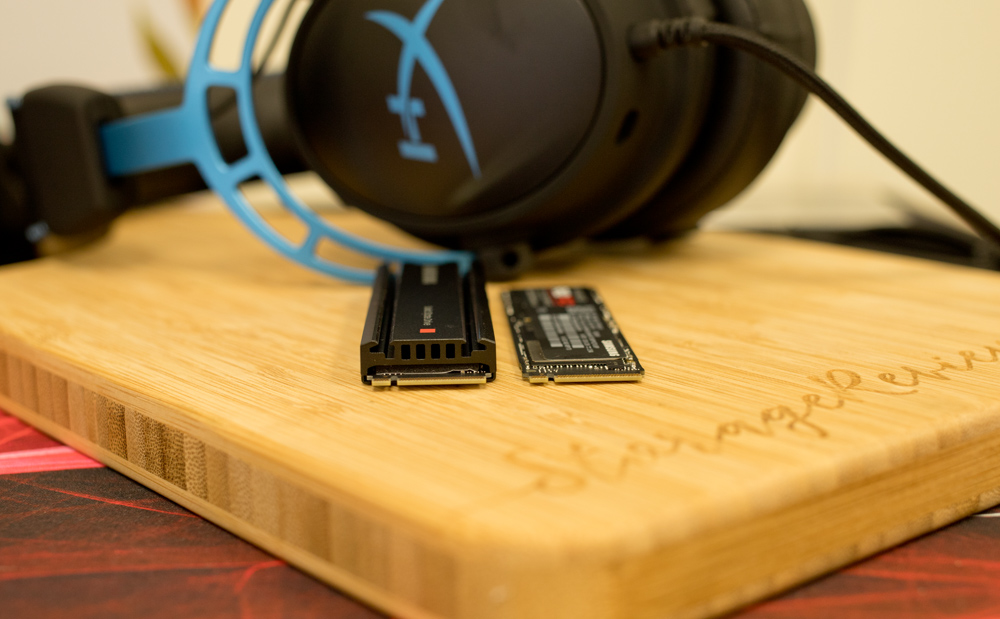 Why buy this drive with a heatsink? The PS5 has no active cooling to its M.2 slot, so anything that can be done to dissipate the heat is a good thing; an SSD will throttle its performance once it reaches a temperature threshold.

The full specifications of the Samsung 980 PRO with heatsink are as follows:

Installing the 980 PRO Heatsink in the PS5 isn’t difficult. It requires a small Philips-head screwdriver, preferably with a magnetic tip. Our experience was as follows: 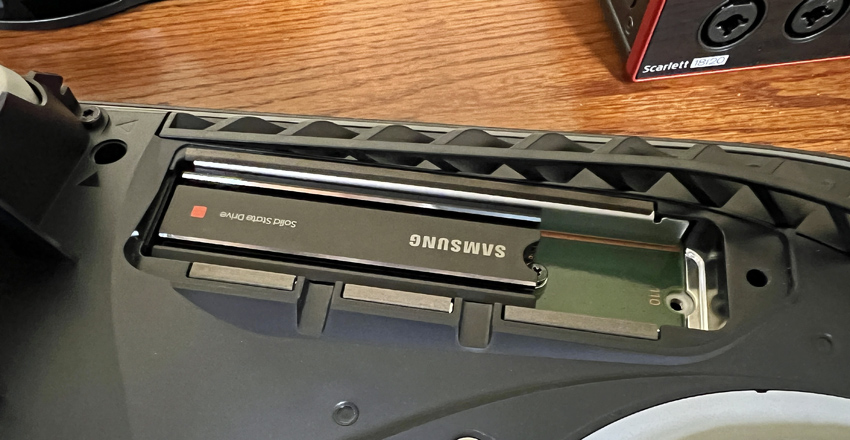 Our testing leverages the common vdBench workload generator, with a scripting engine to automate and capture results over a large compute testing cluster. This allows us to repeat the same workloads across a wide range of storage devices, including flash arrays and individual storage devices. Our testing process for these benchmarks fills the entire drive surface with data, then partitions a drive section equal to 5% of the drive capacity to simulate how the drive might respond to application workloads. This is different from full entropy tests which use 100% of the drive and take them into a steady state. As a result, these figures will reflect higher-sustained write speeds.

Our first test is 4K random read. The 1TB heatsink and the 1TB non-heatsink drives performed almost identically while the 2TB drive showed higher latencies than both. In other words, nothing out of the ordinary.

Now we’ll move onto sequential workloads. The drives behaved similarly here as they did in 4K random read, with the 2TB non-heatsink drive taking top honors. The 1TB drives stayed about even until higher throughputs where the heatsink drive showed a slight advantage.

Last up is 64K sequential write. The 1TB heatsink drive showed the strongest performance here as it did in 4K random write, peaking at 1,990MB/s at 507µs latency. Given how long these tests run, it could be that the heatsink drive is able to maintain its performance better over time, as these drives were otherwise running identical firmware.

To test the effectiveness of the 980 PRO’s heatsink, we ran a 2MB sequential write pattern to the 980 PRO Heatsink and non-heatsink drives, both 1TB versions updated to the latest firmware. We observed the drive’s reported internal temperatures using the Samsung Magician app. The ambient room temperature was 78 degrees F. We ran the test for 30 minutes to ensure the drives heated up.

As might be expected, the heatsink drive ran substantially cooler, finishing at 70 degrees C versus 79 degrees C for the non-heatsink drive. The screenshot below shows the two drives. 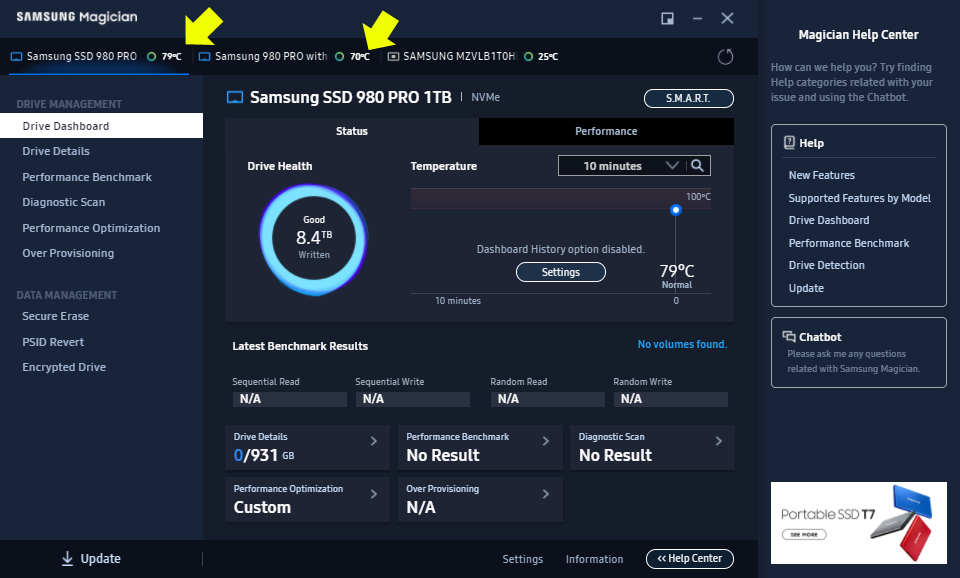 The PS5 has no active M.2 SSD cooling, so for long gaming sessions, the heatsink helps the drive’s temperatures stay in the optimal range. The drive will throttle its write performance if it gets too hot (likely, at or just over 80 degrees C) as will most SSDs, a risk that can be minimized with a heatsink. Electronics that run cooler tend to last longer, too.

Overall, the Samsung 980 PRO heatsink version is an ideal PlayStation 5 upgrade, combining excellent read/write performance with long-term thermal stability for a nominal premium (about $20) over the non-heatsink drive. Intriguingly, our 1TB heatsink drive showed significant write performance advantages over the non-heatsink 1TB and 2TB 980 PRO drives we tested alongside it, which is just icing on the cake for an already high-performance drive.

Samsung 980 Pro with Heatsink at Amazon