The Synology DS2422+ is the company’s newest high-performance DiskStation designed for small and medium-sized businesses. Packed with 12 drive bays and powered by the powerful DSM OS and app platform, Synology indicates that it’s best suited for those looking to store large amounts of data and to easily share their content in a multi-user environment. It will also excel in high-quality video editing and VM storage use cases. You can further increase its capacity and scalability to 24-bays via the company’s DX1222 expansion unit.

The Synology DS2422+ is the company’s newest high-performance DiskStation designed for small and medium-sized businesses. Packed with 12 drive bays and powered by the powerful DSM OS and app platform, Synology indicates that it’s best suited for those looking to store large amounts of data and to easily share their content in a multi-user environment. It will also excel in high-quality video editing and VM storage use cases. You can further increase its capacity and scalability to 24-bays via the company’s DX1222 expansion unit. 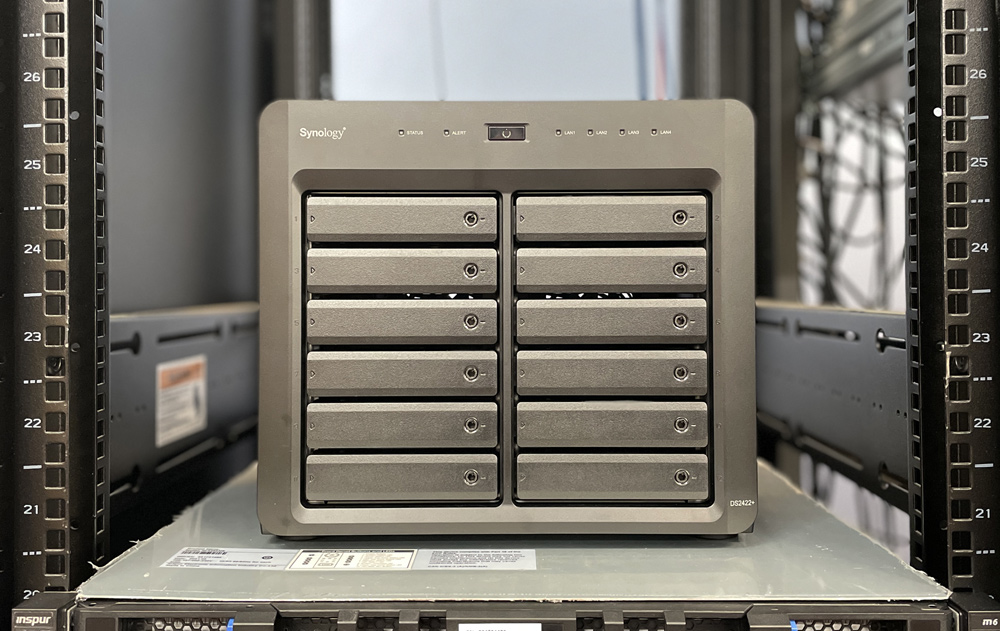 The DS2422+ is a direct successor to the DS2419+, which we found to be a solid offering from Synology. The new DiskStation builds on its predecessor with noticeable (potential) performance improvements, including a 26.8% and 122.9% increase in read and write activity. This equates to a quoted 2,200MB/s read and 1,383MB/s write for sequential speeds in a RAID 5 SMB 10GbE configuration.

Recently, Synology has been persistent in telling users to use their own branded storage drives inside their NAS storage solutions, which is something we’ve taken an issue with. Though you can certainly use other NAS drives inside the DS2422+, they label all non-Synology HDDs/SSDs as “non-whitelisted,” and push this message on users. This can be annoying and even lead to some purchasing drives they don’t necessarily need.

This wouldn’t be so much of an issue if the Synology drives weren’t significantly more expensive than NAS solutions like the Seagate IronWolf Pro or Western Digital Red Pro. That said, as we indicated in our previous review, Synology told us they plan to make these messages less severe in the future. So, we’ll see.

Backed by a 3-year hardware warranty, the Synology DS2422+ goes for roughly $2,100 for the diskless model on Amazon.

The DiskStation DS2422+ is a larger desktop NAS solution that looks exactly like other recent 12-bay NAS releases (e.g., the DS3622xs+). It sports the usual all-black design with Synology’s logos on both sides, while all 12 front 3.5-inch bays feature basic drive locks and status LEDs. In addition, Synology has made adding and removing drives to and from these bays a seamless process due to its hot-swapping functionality. Along the top of the front panel are the status, alert, and LAN LEDs with a power button in between.

Below, you can see both drives we will be using for testing the DiskStation DS2422+ in our benchmarking section: the 480GB Synology SAT5200 SATA SSD on the left and the 16TB Synology HAT5200 SATA hard drive on the right. 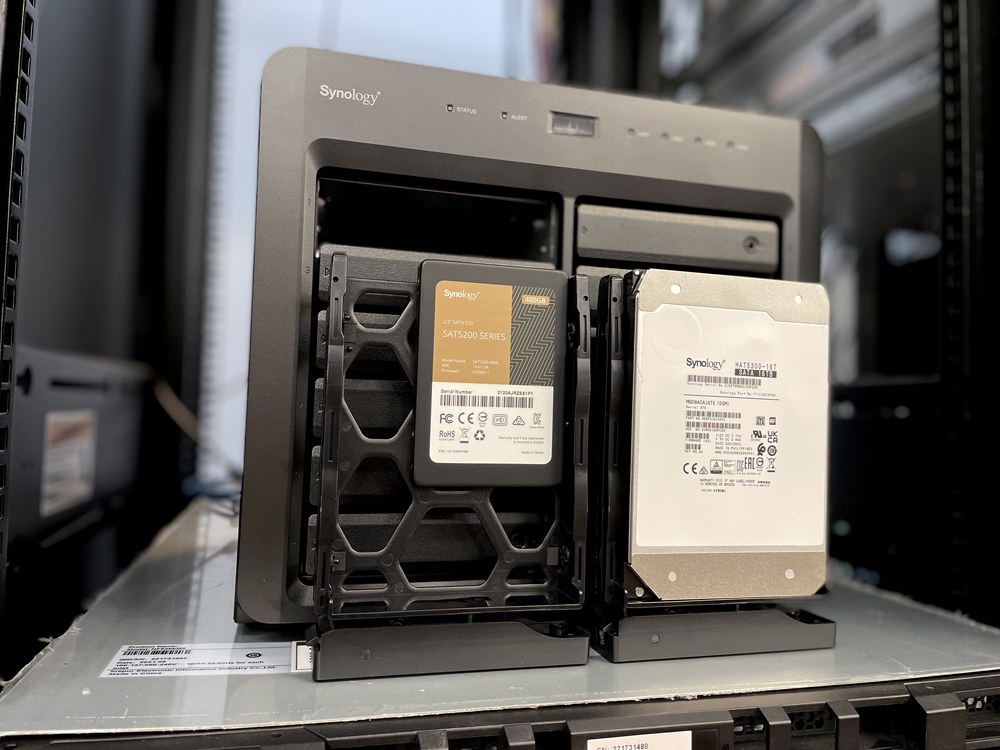 At the top right is the PCIe expansion slot cover. It comes unpopulated; however, you add further networking or M.2 caching functionality, as mentioned above. 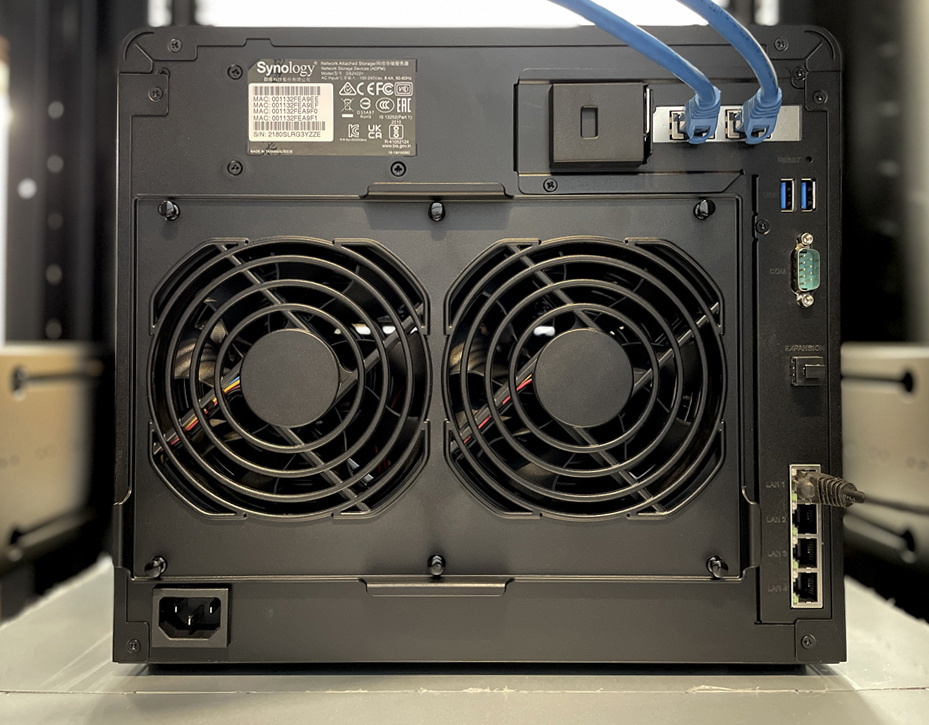 Most of the back-panel real estate is taken up by dual 120mm x 120mm cooling fans (which feature full-speed, cool, and quiet fan modes), while the 550W power connector is located at the lower left.

We are testing the DiskStation DS2422+ in two configurations:

We tested each disk configuration in SMB and iSCSI and be comparing the DS2422+ to our recently reviewed DS3622xs+. Though similar, the DS3622xs+ features an additional expansion port, 10GbE networking (versus the DS2422+’s 1GbE), uses a faster Intel Xeon D-1531 (6-core/12-thread, 2.2GHz base, 2.7GHz Turbo Boost) CPU, and comes with a longer five-year warranty.

First up are the enterprise workloads, where we measure a long sample of random 4K performance with 100% write and 100% read activity. The DS2422+ scaled to 81,238 in SSD RAID6 iSCSI. In comparison, the DS3622xs+scaled to 244,115 read IOPS in the same configuration. As you can see below, the DS2422+ was also well behind the DS3622xs+ when tested with hard disk drives (though expected).

In our last 4K test, standard deviation, the DS2422+ performed fairly well and actually had a better read result than the  DS3622xs+ using an SSD RAID6 SMB configuration, where it posted just 17.01ms.

In our next set of tests, we look at mixed workload 70% read/30% write performance, which scales workloads from two threads, two queues to 16 threads, 16 queues.  In the SSD configurations, the DS3622xs+ and the DS2422+ are pretty much on par with each other up to roughly the 4 threads/8 queue. Passing this mark, the began DS3622xs+ performing much better, reaching over 100,000 IOPS around 16 threads/8 queue. The DS2422+ performance slowed down around the 8 threads/16 queue mark. 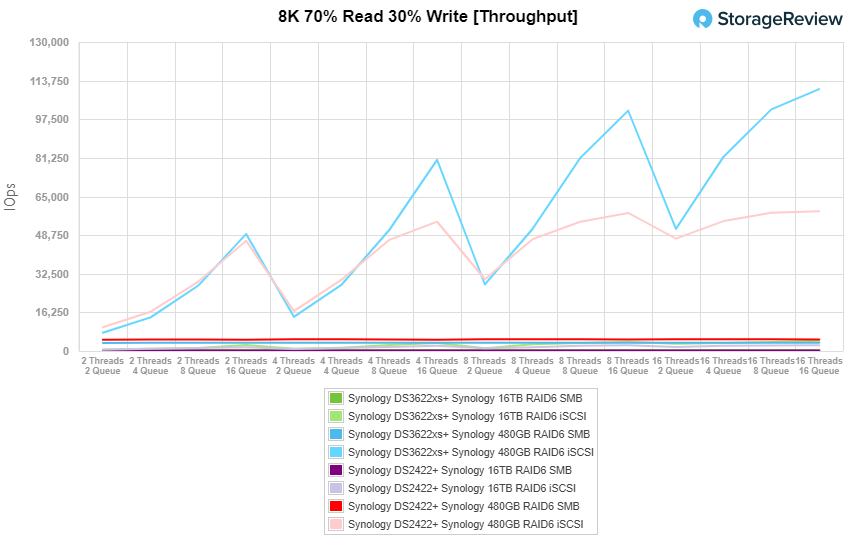 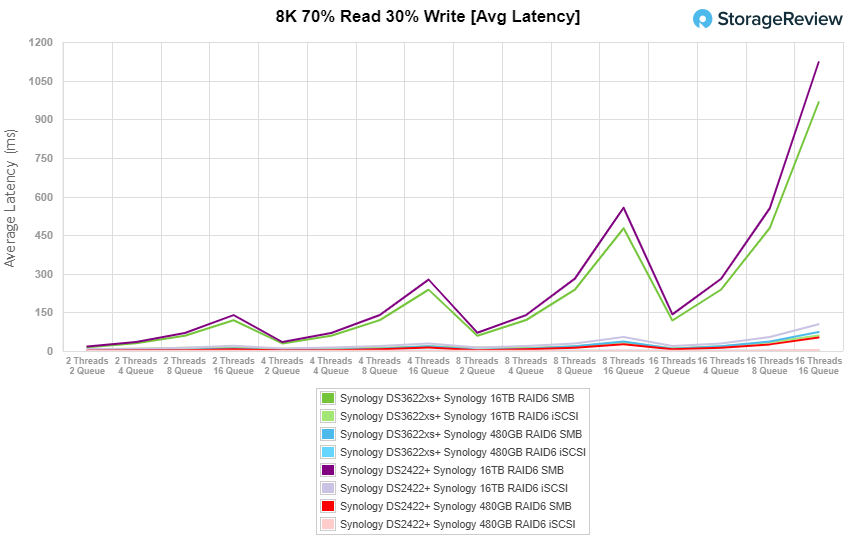 In 8K 70/30 max latency, the top HDD and SSD configuration were both in iSCSI again, posting a range of 450ms through 2,367ms and 41.67ms through 305.15ms, respectively. Unsurprisingly, the DS3622xs+ had lower overall numbers and more consistent performance. 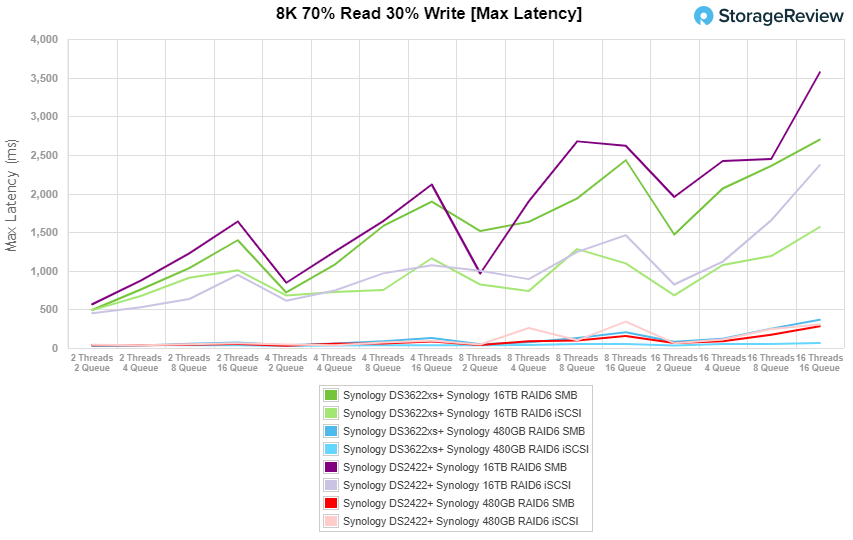 Last in our mixed workload tests is 8K 70/30 standard deviation, where results were much closer (which is visually evident in our charts below). Overall, the DS2422+ was slower in latency compared to the DS3622xs+, but it still performed well. The top DS2422+ HDD configuration was in iSCSI, with latency ranging from 450.5ms to 2,367.3ms, while the top SSD configuration was in SMB, with latency ranging from 34.04ms to 281.11ms. 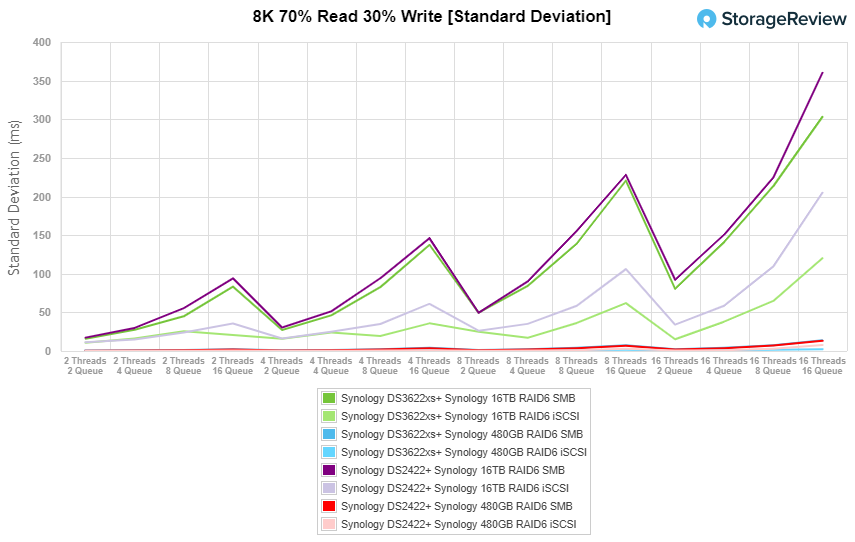 Overall, the DiskStation DS2422+ is a solid 12-bay NAS for small and medium-sized businesses. Powered by Synology’s comprehensive and easy-to-use DiskStation Manager OS (DSM), the DS2422+ offers users a streamlined user interface with a range of management support, multimedia tools, backup solutions, and other functionality. It can also scale up to 24 drives via a single 12-bay DX1222 expansion unit. 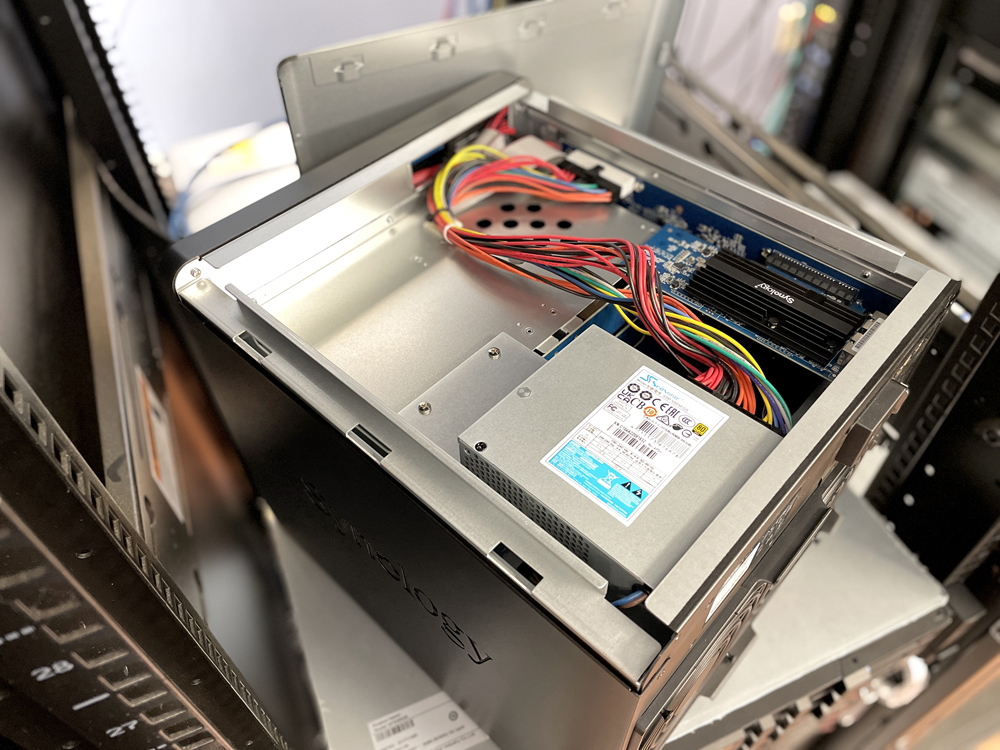 There are some cons, however. If users wish to leverage M.2 SSD caching via Synology’s PCIe expansion card (due to the absence of an M.2 slot), this will limit the NAS to a single 10GbE port. In addition, we found Synology’s insistence on using their branded storage drives (which are much more expensive than other NAS drives like Seagate or WD) a bit annoying. It should be stressed that you can still use your own drives with the DS2422+ despite their messaging.

If you’re a small-to-medium-sized business looking to spend $800 less (compared to the DS3622xs+) for a solid-performing high-capacity NAS solution for your backups or multimedia projects, the DS2422+ may be a good fit. Synology makes life easy with DSM and a deep application library. Just be prepared to pay a premium for Synology branded storage if you don’t want compatibility alarms in your UI.