The latest SanDisk Professional G-DRIVE SSD is an ultra-durable portable drive under the newly established SanDisk Professional line, which is built to tough it out in the elements. Though rugged, the G-DRIVE is a relatively small storage device while offering decent transfer rates up to 1.05GB/s in sequential reads. This performance allows users to quickly edit and save large files (such as 4K images and footage) on the go without much worry.

The latest SanDisk Professional G-DRIVE SSD is an ultra-durable portable drive under the newly established SanDisk Professional line, which is built to tough it out in the elements. Though rugged, the G-DRIVE is a relatively small storage device while offering decent transfer rates up to 1.05GB/s in sequential reads. This performance allows users to quickly edit and save large files (such as 4K images and footage) on the go without much worry. 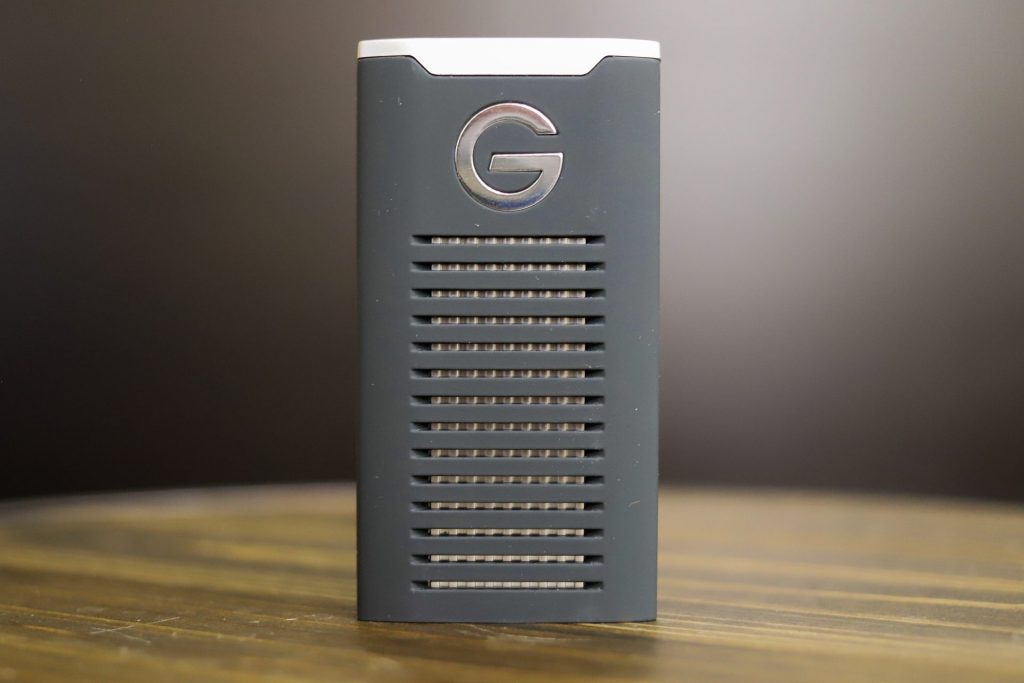 Users can also download free software for password-enabled 256-bit AES-XTS Hardware encryption to ensure that content stored on the drive is protected from unauthorized access. Moreover, the G-DRIVE SSD leverages the USB-C SuperSpeed 10Gbps (USB 3.2 Gen 2) interface and is bundled with a USB 3.0/2.0 cable adapter for backward compatibility in older systems.

SanDisk offers the new G-DRIVE SSD in three capacities, some of which are currently on sale on Amazon: $297 (2TB), $185 (1TB), and $140 (500GB) as of this review. The WD Store has the 500GB for $110, 1TB for $230, and 2TB for $360. This makes it slightly more expensive than the popular Samsung T7 and Kingston XS2000, and noticeably more pricey than the USB drive Kingston DataTraveler Max. Though the latter solution is a just flash drive, it still offers enough performance to compete with external NVMe SSDs. We’ll be using these drives for comparisons in the benchmarking section. 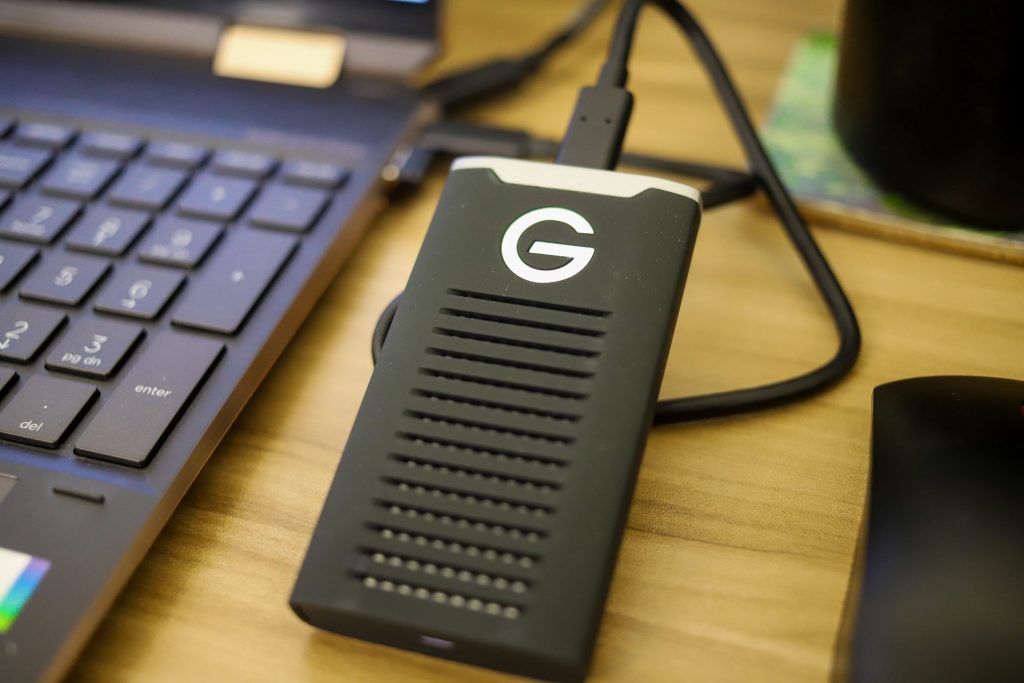 As we indicated above, WD claims the usual speeds for the new durable drive, including a hair over 1GB/s in sequential reads and exactly 1GB/s in writes. There’s no indication of the NAND type or controller model.

Backed by a standard five-year warranty, the G-DRIVE SSD is built with IP67 water and dust resistance, up to 3-meter drop protection, and 2,000lb crush resistance.

Here is a rundown of the drive’s full specifications:

The new G-DRIVE has the same tried and true build we’ve come to expect from the portable SSD line (i.e., rugged and very durable). It feels like a high-quality device when handled. Measuring at 3.74 inches long and just under 0.6 inches in thickness, it’s also a relatively compact device and can easily fit in a pocket.

The body itself is aluminum, which helps with dissipating heat, and features a rubberized paint substance over most of the body to help soften blows from drops and other bumps it might be put through. 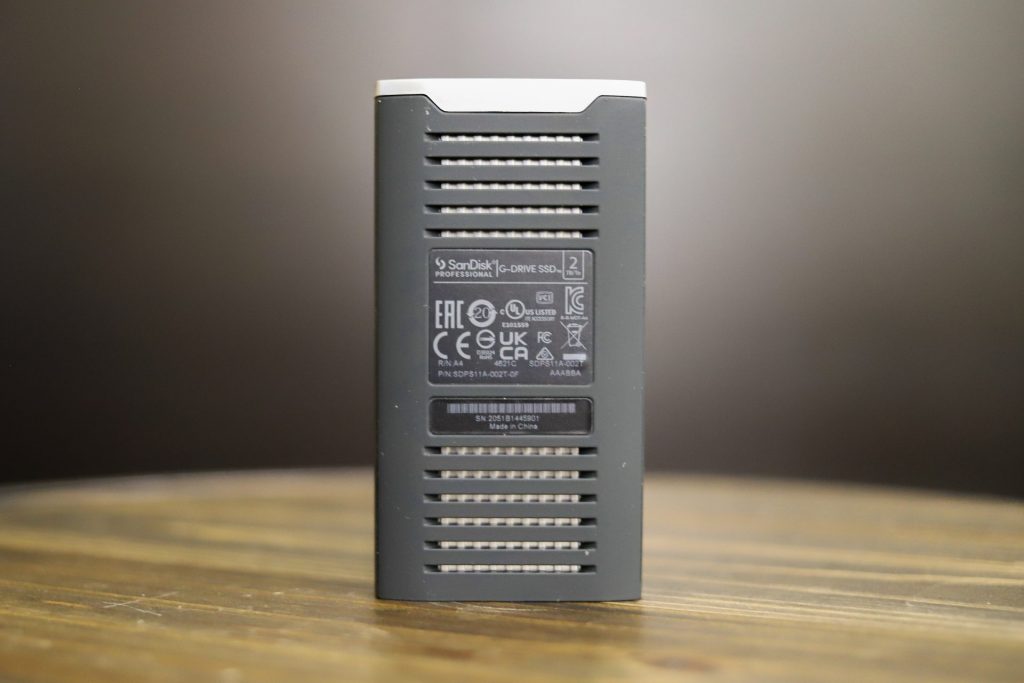 WD recently rebranded the G-Tech line as SanDisk Professional earlier this year; however, this G-DRIVE device displays little indication that it is a product from the new SanDisk line. The SSD simply has a large “G” on the front of the drive. This isn’t a knock towards it, we just found it a bit odd.

Nonetheless, the USB-C 3.2 Gen2 port is located on the bottom of the device. There are no LED indicators. 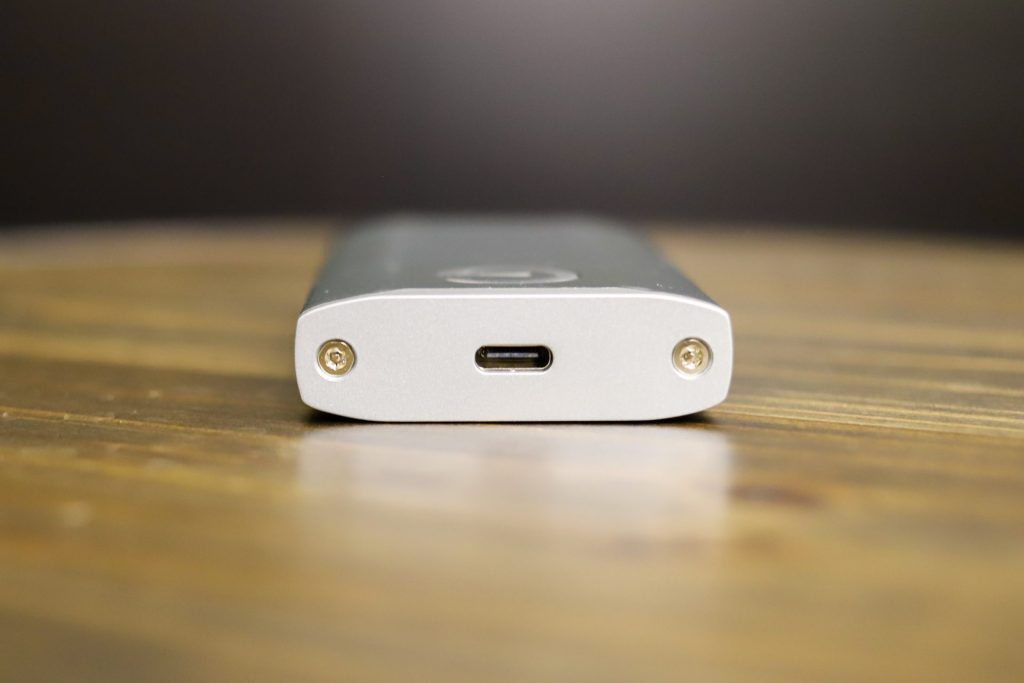 To gauge the performance of the G-DRIVE, we tested it via Blackmagic software and IOMeter while comparing it to the following other portables: 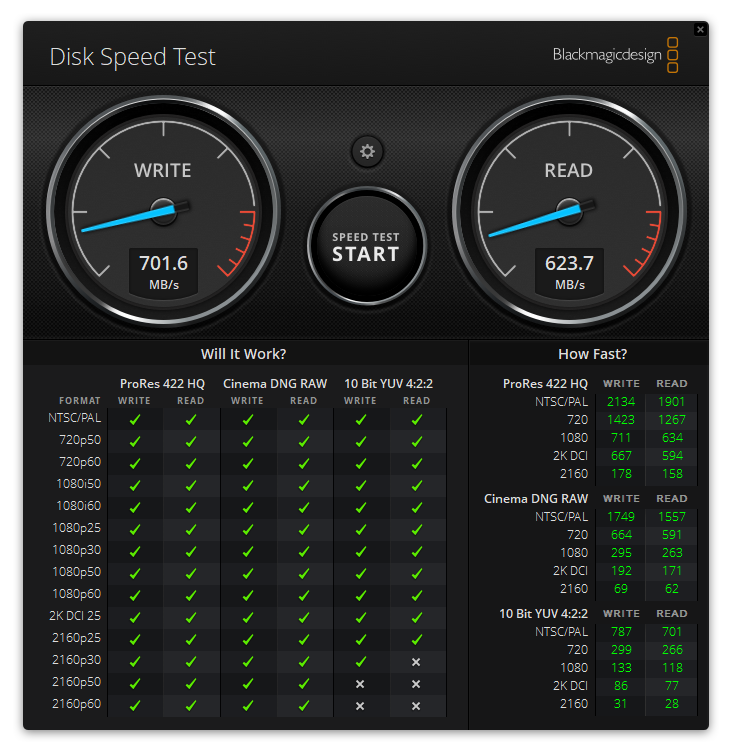 For IOMeter, we first looked at 2MB sequential with both 1 and 4 thread, the latter which is a higher load that pushes the drive a bit more. We saw more of the same numbers from the G-DRIVE in these tests:

As far as performance goes, the G-DRIVE SSD didn’t quite reach its quoted read speeds of 1.05GB/s. In our usual Blackmagic test, it hit 623.7MB/s read and 701.6MB/s write, while reaching just 604.54MB/s and 638.82MB/s for sequential reads and writes in IOMeter (1-Thread). Looking at the more demanding 4-thread test, the G-DRIVE was able to reach 660.95MB/s read and 742.74MB/s write in sequential performance. Random performance had more or less the same results.

At an MSRP of $185 for the 1TB model, it can be a tough sell to some consumers, especially since the Samsung T7 and Kingston XS2000 external SSDs are roughly $20 cheaper with better performance (especially the latter). That said, the G-DRIVE offers higher quality and more rugged/durable build that can function well in the elements. This can certainly outweigh some of the cost differentials. Overall the branding strategy is odd, parent company WD offers faster drives (non pro) in this category. But media pros that love the G-Tech legacy may see some brand value here, especially if the price falls.