The Synology NAS and their underlying OS, DiskStation Manager (DSM), comes with several interesting packages (think apps) that can be downloaded from the Package Center for free. These packages run the gamut of multimedia for the casual user to virtualization and containers for small to medium businesses. Today we are going to look at, what is probably the most used package on my Synology NAS, Synology Audio Station.

The Synology NAS and their underlying OS, DiskStation Manager (DSM), comes with several interesting packages (think apps) that can be downloaded from the Package Center for free. These packages run the gamut of multimedia for the casual user to virtualization and containers for small to medium businesses. Today we are going to look at, what is probably the most used package on my Synology NAS, Synology Audio Station. By the title, it is easy to guess that Synology Audio Station is for playing audio like music and radio stations. The package allows users to create and manage large music collections where they can create playlists and even share. Users can add internet radio stations as well. And with the nifty mobile apps, you can take the music with you and even listen to it offline.

The big question here is why bother? There are several music streaming services now and they all run at about the same price, these include: Apple Music, Amazon Prime Music, and Spotify. And while I have two of the three listed, I still use Synology Audio Station several times a week.

I’m not a music connoisseur, I am a huge fan and I have music in various media formats from some rare vinyl to CDs to MP3s I’ve purchased over the years. And to be honest, the streaming services don’t cater to my eclectic tastes. There are several albums that just aren’t available to stream for various reasons (including the artists or studio fighting over rights). There are also “rare” albums or ones that have track listings that are different from the main album. I have dozens are these albums that I can only listen to with Audio Station or in their original format.

Let’s get a bit more into it. According to Synology, Audio Station allows users to enjoy high-quality playback at what they say is near-original quality (when playing through a DLNA renderer). The package has lossless playback to the players it supports and gapless live music when streaming to web browsers, internet connection not withholding. Apple, Android, and Windows Phones (whoever uses those still) can download the app (DS Audio) for Audio station and take it on the go or connect to Bluetooth devices to play. Those with Amazon Alexa can use voice controls on the package. The DS Audio mobile app also works with CarPlay and Android Auto.

Installing Synology Audio Station is pretty easy. Go to Package Center and either search for it or just scroll down a bit, it tends to be near the top of the packages. Click on it and it gives one the option to install. Click on that guy and a few minutes later you should be good to go, time varies with internet connection and NAS model. 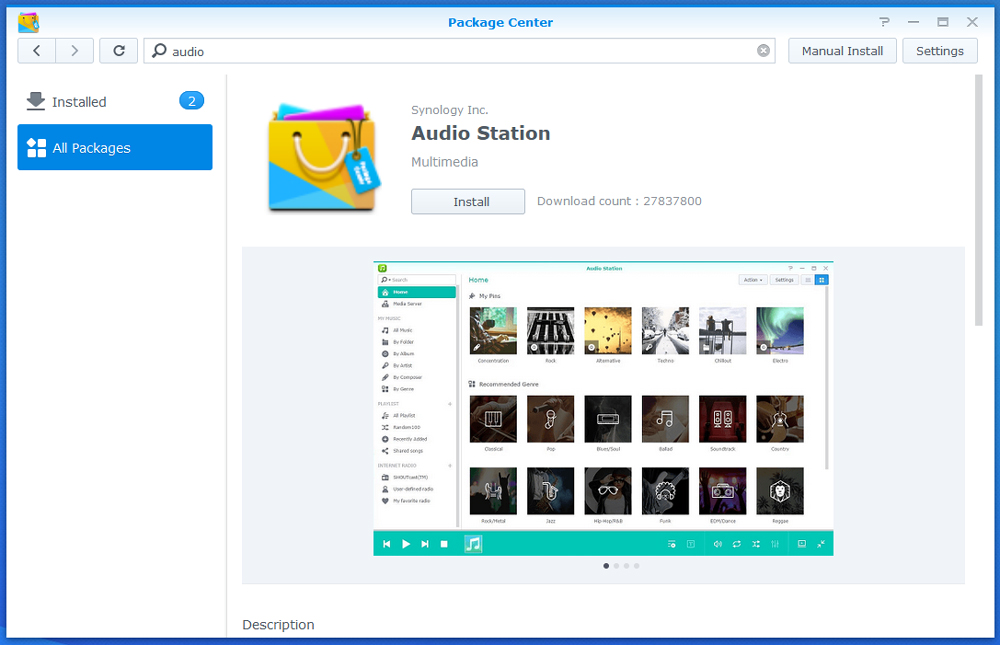 Loading music is easy as well. Go to File Station and there will be a tab for music. Click on that and just drag and drop the music you want to add. If your computer doesn’t have an optical disk player for burning music, you can pick a USB-enabled one up pretty cheap. 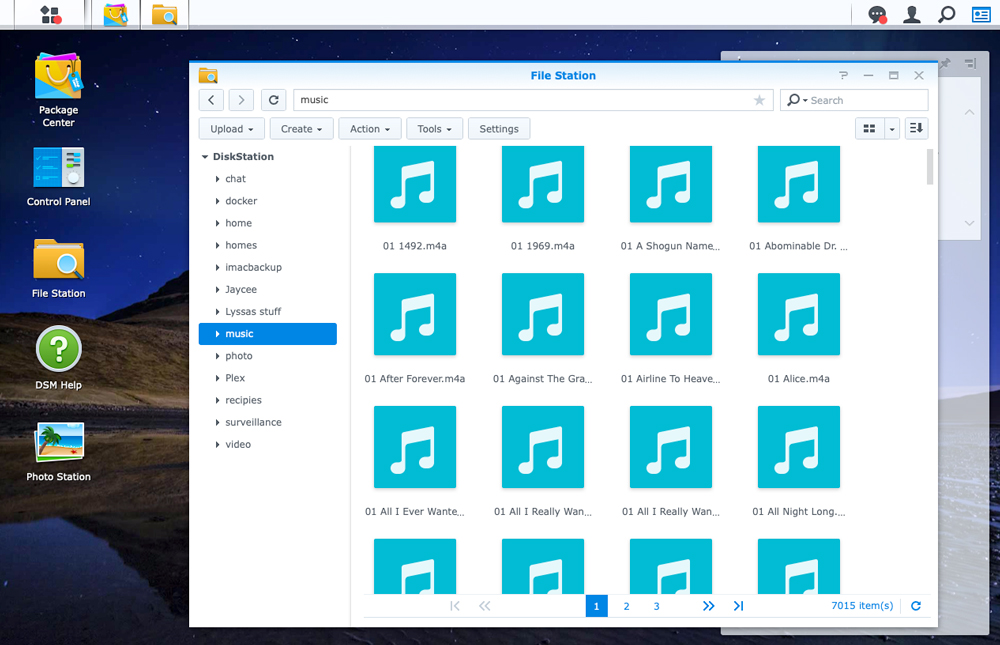 After that, going back to Audio Station and click All Music and you can see your songs. 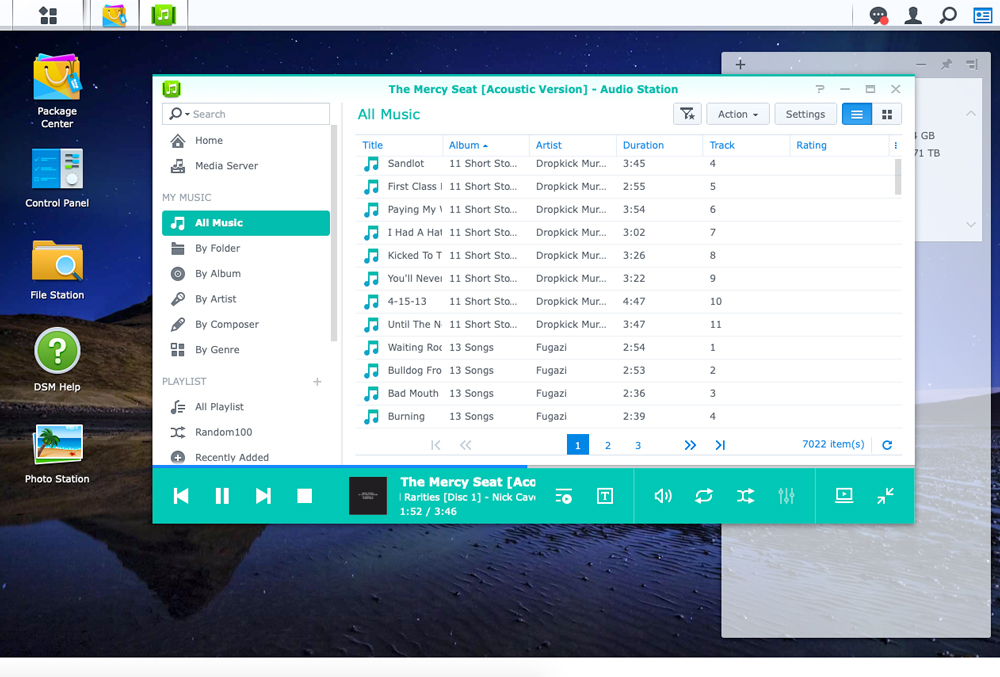 Audio Station has a fine audio player that you can use through your browser, I’m doing it as I write this. Here you can create a playlist, share music, and edit song tags (also add cover art if you want as it is not always automatic). However, the browser-based player is not my favorite and I rarely use it outside of working on a computer. 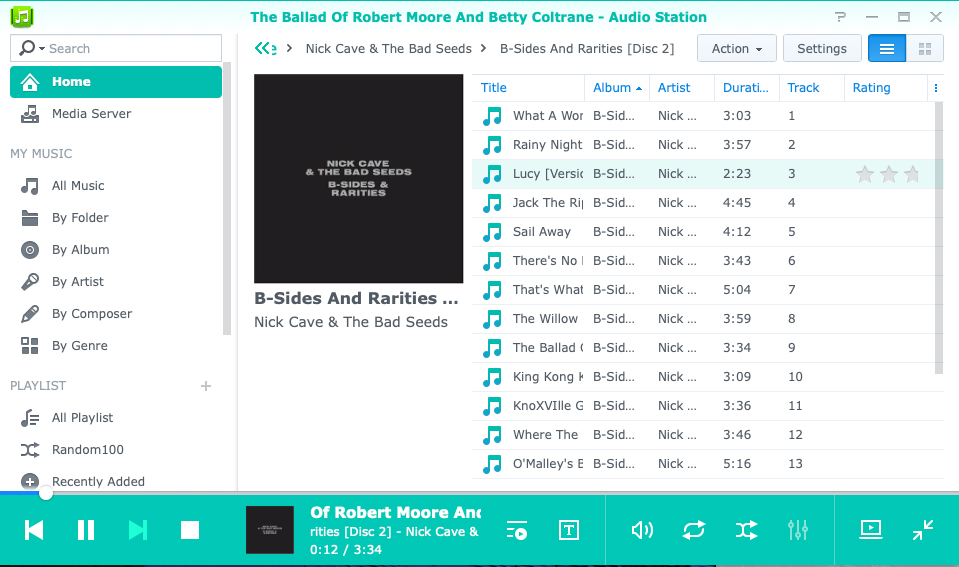 Synology also has mobile apps that connect to the NAS on the go. The app is called DS Audio and is available for Apple and Android and can be found in the respective app stores.

Once downloaded, you will have to use your Synology quickconnect ID to sign in, it only takes a moment to set up on Synology’s main site. And then you are good to go.

Here you can go to your library and at the bottom use Albums, Artists, Composers, Genre, or Folders to search for music.

You can also download music and play it anywhere regardless of connection.

Synology Audio Station is a way for users to store and share their music collections, as well as connect to internet radio. The package allows for high-quality playback on a variety of devices. It supports Amazon Alexa for voice control, as well as CarPlay and Android Auto. There is also a mobile app, DS Audio, for Apple, Android, and Windows phones.

If you have a Synology NAS and have some music that you can’t stream, Audio Station is a must. As I said, I use it several times a week. I have rare albums, independent albums, or weird off-printed albums that just don’t stream. The audio quality is great, about the same as the original and it doesn’t lag, even though my Synology is ancient. While it connects to several different things, I tend to just use the mobile app and connect it to Bluetooth speakers, my car, or headphones.

The only thing that could use some work is the browser-based media player. It allows for lots of organizing or editing tags but it leaves a lot to be desired. It occasionally has issues playing with certain browsers too. My advice, organize everything in the browser and use the mobile app for playing it where you need it. Also, you can’t really discover new music, unless you are using the internet radio.

In the end, though, it’s another really useful free app that reminds us of the value Synology offers. Not just in the NAS itself, but in the entire ecosystem Synology provides, including apps like Audio Station.