Recently, we published two reviews (DS2422+ and DS3622xs+) on Synology devices and we have received a variety of questions all revolving around the use of using non-whitelisted drives within new Synology 12-bay NAS models. For those not aware, Synology has gone to a whitelist approach for 12-bay tower and enterprise rack models, sort of requiring the use of Synology branded HDDs. If you don’t comply, get ready for the Synology unverified drive experience.

Recently, we published two reviews (DS2422+ and DS3622xs+) on Synology devices and we have received a variety of questions all revolving around the use of using non-whitelisted drives within new Synology 12-bay NAS models. For those not aware, Synology has gone to a whitelist approach for 12-bay tower and enterprise rack models, sort of requiring the use of Synology branded HDDs. If you don’t comply, get ready for the Synology unverified drive experience. 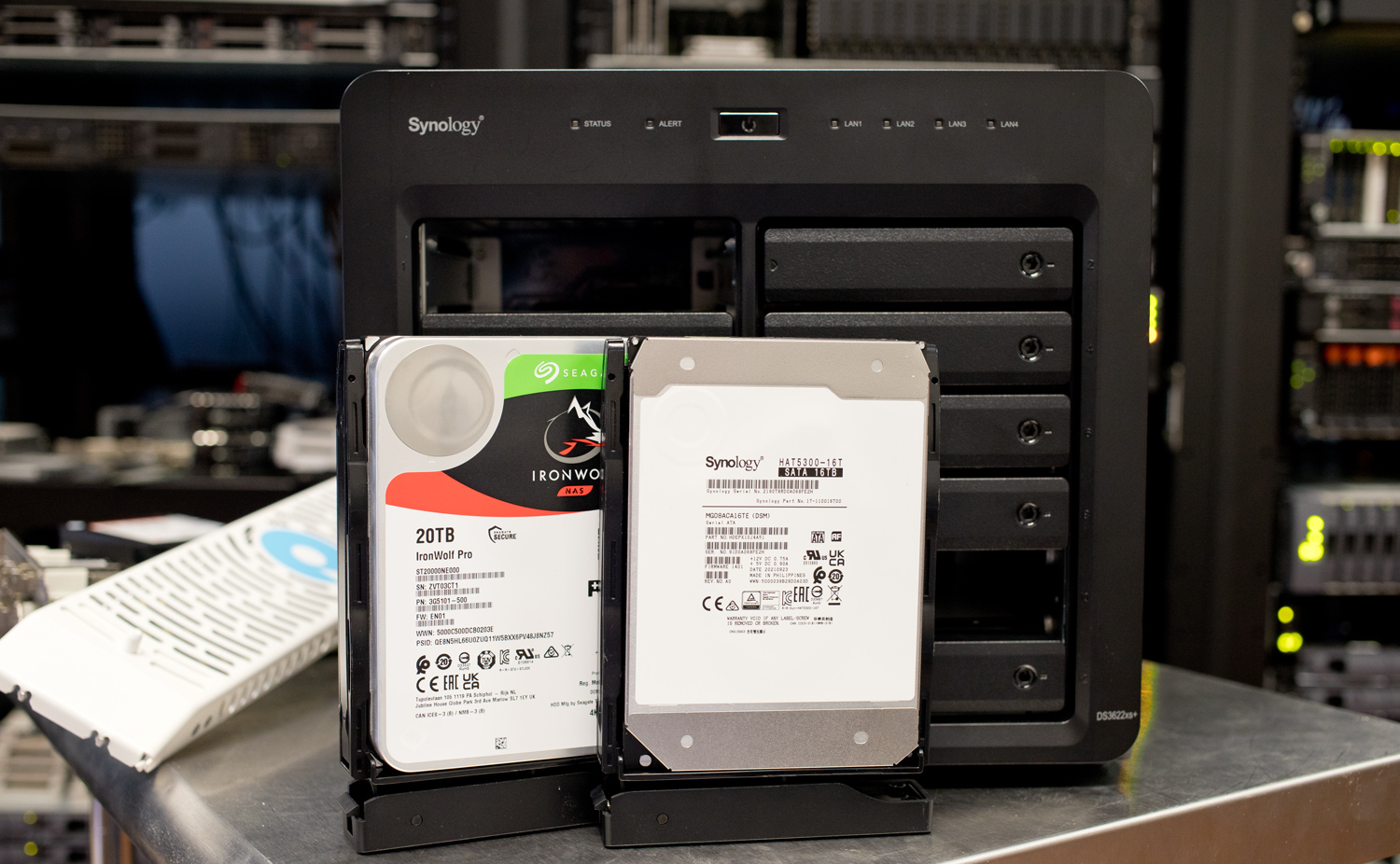 We came across this issue in our review, using drives like the Seagate IronWolf Pro 20TB resulted in warning messages that get pretty aggressive. We ended up switching to the Synology 16TB HDDs to ensure the reviews could be finished without issue. But with the HDD requirement and so many questions on social media after those two reviews, we wanted to dive in a little deeper on this front. This article covers the user experience in larger Synology systems with non-qualified HDDs.

For a little context, Synology NAS devices run off their proprietary software called DiskStation Manager or DSM, and recently, Synology released a new version and there are quite a few changes. Towards the end of January 2021, Synology launched its brand of hard disks and SSDs.

This launch came in the form of two trios: a new line of hard disks and a new line of enterprise NAS models. For the hard drives, Synology has partnered with Toshiba for its new branded HDDs. This new line is known as the HAT5300 and comes with three different capacities of hard drives in either SATA or SAS interfaces. There is an 8TB, 12TB and 16TB model that skew in price pretty significantly. On the SATA side, it scales from $339 to $479 to $656. On the SAS side, it goes from $349 to $499 to $649.

With this launch of the Synology drives, Synology doubled downed by effectively locking its newer NAS units from using most other vendors’ high storage drives. This trend isn’t unknown in the enterprise world, but it generally involves a much different class of products. Requiring branded drives for Dell or HPE servers, or specific drives in a NetApp storage array, for example, is common.

Some of that is the rigorous testing to verify the part will work completely. Most of that cost comes from the warranty and support contracts that service the system as a singular unit, with “exotic” warranties most consumer or prosumer users don’t get to experience. This includes support packages with on-site unattended replacement, spare parts, and SLAs that guarantee performance or uptime.

For Synology’s part, the move to branded HDDs is for similar reasons. They feel by offering their own drives as the primary qualified part, they can mitigate issues that occur when customers or system integrators supply their own drives. As such, Synology has priced the drives at the enterprise strata but doesn’t provide the same scope of support large enterprise vendors are required to offer.

What happens when you use non-whitelisted drives in Synology NAS systems that require them? The problem that we have and so many others have now is the warning messages that pop up when Synology devices are booted and don’t contain Synology branded NAS drives.

At first, second, or third glance you’d be right to assume that the NAS was experiencing a severe failure. System health is critical, the storage pool is degraded and you lose front-line access to drive health data. These can be intimidating messages, not just for new NAS users. Imagine being a solutions provider and dropping this off at a customer site. There’s no way anyone could do that and remain credible. 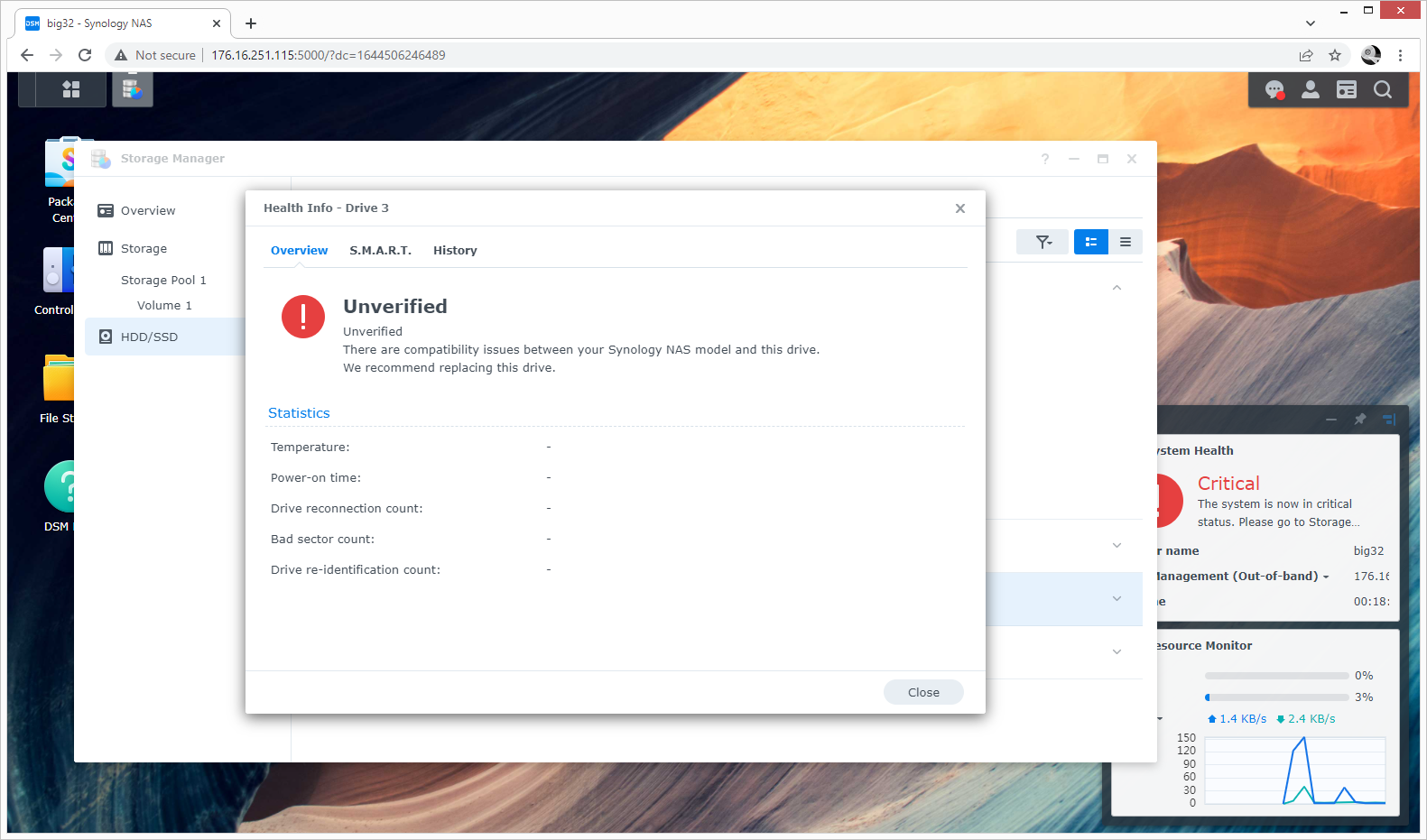 Now, honestly, this message that Synology has isn’t such a bad idea, however, what makes it the most annoying thing to deal with is you can’t get rid of it. First, this message feels as if the world is ending as the DSM is constantly bombarding the user with this message trying to make them aware of what they are using. Using words like “critical” makes users feel uncomfortable and although gives a sense of urgency, annoys the user more than anything.

As noted, in our Synology Diskstation DS2422+ Review, we originally used the IronWolf Pro drives, but this message of something is wrong and the vibe that Synology pushed that the entire system is going to fail just got annoying to deal with, so we just swapped out for the Synology branded drives.

The issue isn’t so simple, just swapping to Synology HDDs has limitations. Synology branded drives run the average user over $300 for a 12TB model and on the other hand, Seagate drives like the IronWolf Pro or EXOS run $300 for a 16TB model. Additionally, Synology’s capacities stop at 16TB, where Seagate and WD offer several 20TB options. While most aren’t opting for those giant drives, NAS platforms in this category have historically been appreciated for their flexibility. There are plenty of use cases where the density alone may preclude someone from buying a Synology.

We can understand why Synology is doing this though right? We assume they want to push their branded products to get people to invest a little more in Synology, every business does that and it’s not uncommon. At the enterprise level, WD and Seagate both sell JBODs and other storage platforms as a way to couple the sale of HDDs at the same time. Why we are talking about this though, is because of the extent that the DSM goes to alert users that what they are using is unverified.

We can also understand that Synology’s DSM limits features available to users when they aren’t using Synology branded drives. Features showing all the details of a drive that is installed on the system such as allocation status, bad sector count, temperature, serial number, etc, won’t be shown on non-Synology drives. These features though are offered on other Synology NAS models using non-Synology HDDs without the restrictions in place though. The one single benefit besides the drive being “verified” is Synology offers drive firmware update capabilities through the DSM interface. 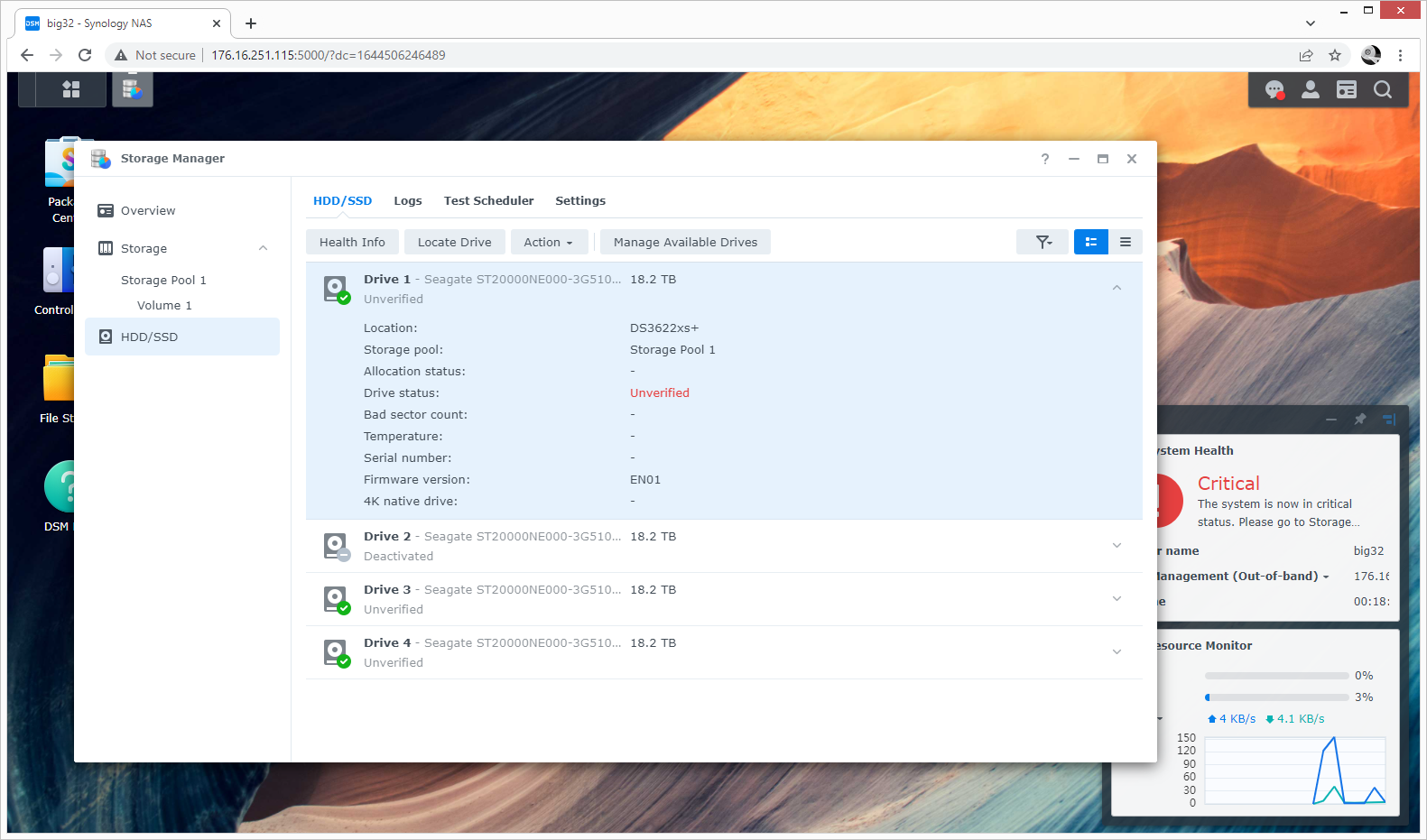 Besides the numerous warning messages that will constantly be on the DSM and alert you that something is wrong, the NAS will continue to perform its base function normally. We went as far as making a RAID group fail by removing an unverified drive and DSM allowed us to rebuild with another same unverified drive. So not all core functionality is lost, but it sure makes things problematic.

SMART data, for instance, is shown immediately to users with a qualified drive. To see it on the IronWolf Pro for instance, the user has to drill down a few levels to get there. These systems also lose support for certain tools like Seagate’s IronWolf Health Management, something that’s broadly advertised as supported by Seagate and Synology. Synology still supports IHM, but just on older units. Synology offers this guidance, “IHM is only compatible with specific drive sizes and only available on specific Synology NAS models released before the 22-series.”

We talked about the frustration that we got from using Seagate IronWolf Pro HDDs and needing to switch to the Synology brand drives, however, this isn’t a luxury everyone can afford. If Synology made their drives directly comparable in price (and capacity) to other drives on the market, then there wouldn’t be much to complain about. But even so, storage users are particular, and everyone has scars. It’s common for users to prefer one brand over another and open NAS platforms have historically been a friendly place.

The thing is, Synology isn’t being friendly and it looks like going forward the restrictions could get worse. While we’ve been told a future DSM release will lessen the warnings, Synology has much ground to make up to reassure their customers that they’re not going to be forced into Synology HDDs across the portfolio. We understand the “why” of the decision, but ultimately Synology is wrong in its draconian approach.

Just take the Seagate Exos HDD line for example. In a direct comparison, the Seagate model has a street price for the Exos 8TB model at $253.73, the 12TB at $300, and the 16TB at $299.99 (all prices from Amazon). This is in contrast to the Synology models, which cost almost double. They currently sell for $339 for the 8TB, $479 for the 12TB, and a whopping $656 for the 16TB. If you look only at list price they may be closer, but that isn’t the price customers pay. The volume of drives sold most likely comes into play, but that isn’t the customer’s fault when the change is forced on them.

When Synology decided to require the drives, it left many users frustrated, but initially, it was only their larger systems that had the requirement. Now it looks like 22 series NAS forward may impose more drive restrictions. Hopefully, this isn’t the case and small system users still get to keep the drive selection of their choice. But the direction is problematic and the DSM warnings are needlessly scary. Customers will have their say though and Synology will respond. The question is, what’s the next move?