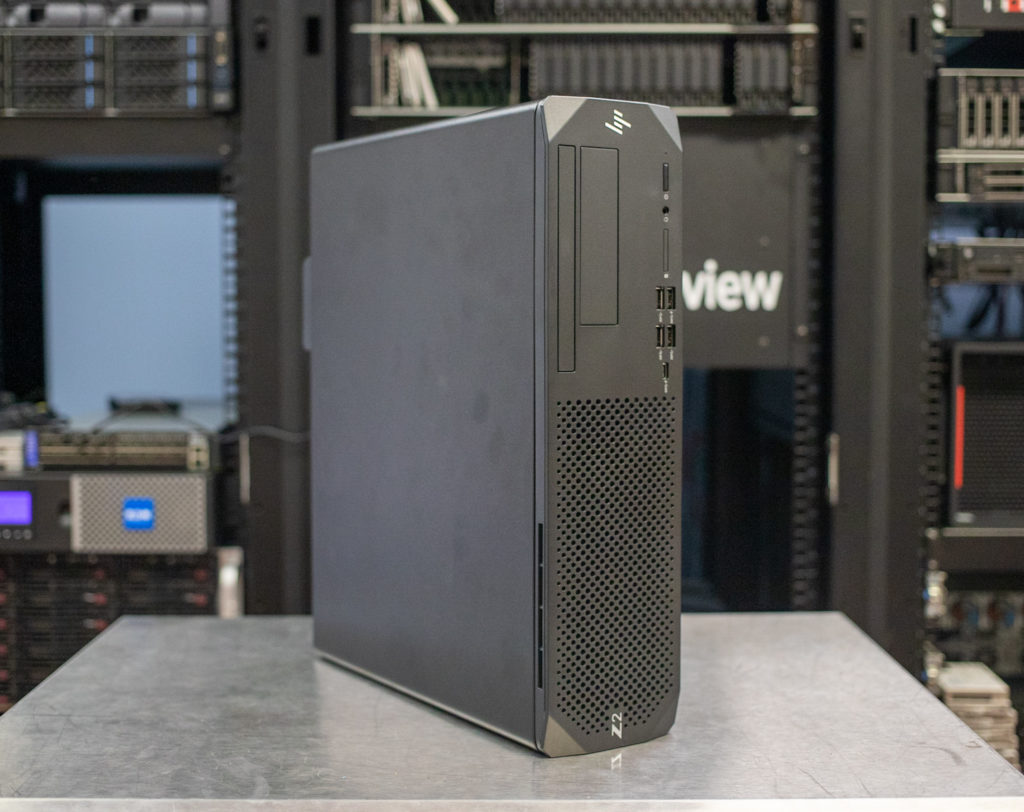 The Z2 SFF G9 is an evolution of the Z2 SFF G8, with a revised chassis and newer technology. Its most important change is a move to Intel’s 12th generation “Alder Lake” Core-class processors, topping out with the 16-core Core i9-12900K. (See that link for an Alder Lake rundown.) This gives it significantly more potential than the last model, which was based on 11th generation “Rocket Lake” chips that topped out with the 8-core Core i9-11900K. It also allows the Z2 SFF G9 to use higher-bandwidth DDR5 memory. It also supports ECC memory with Core processors. (Intel has discontinued entry-level Xeons for workstations like this.)

New graphics options include the latest professional boards from AMD and Nvidia. The primary graphics card goes to the 16GB Nvidia RTX A4000; a second graphics card is available up to the 8GB Nvidia T1000.

Storage expansion has improved this generation; the Z2 SFF G9 now accommodates three M.2 Gen4 drives, up from two. It also fits two 3.5-inch drives. Memory expands to 128GB of DDR5-4800 via four UDMM slots. Overall, the Z2 SFF G9 offers lots of power and expansion for a small-form-factor tower. Its full specifications are as follows:

The Z2 SFF G9 is a small desktop, 15.1 by 12.1 by 3.95 inches (WDH) and starting at 13.1 pounds. The black case looks clean and professional and can orient vertically or horizontally. Reflective logos on the front panel hint this is a premium model. Most of the chassis is metal.

The front panel’s left half is perforated for airflow. HP offers a dust filter bezel for protection in particle-rich environments. It has four USB-A 3.2 Gen 2 ports (10Gbps), an optional USB-C 3.2 Gen 2×2 port (20Gbps), a universal audio jack, and an optional SD card reader. There’s also room for a slim optical drive and a flex bay, which can fit an externally accessible 3.5-inch drive via caddy. 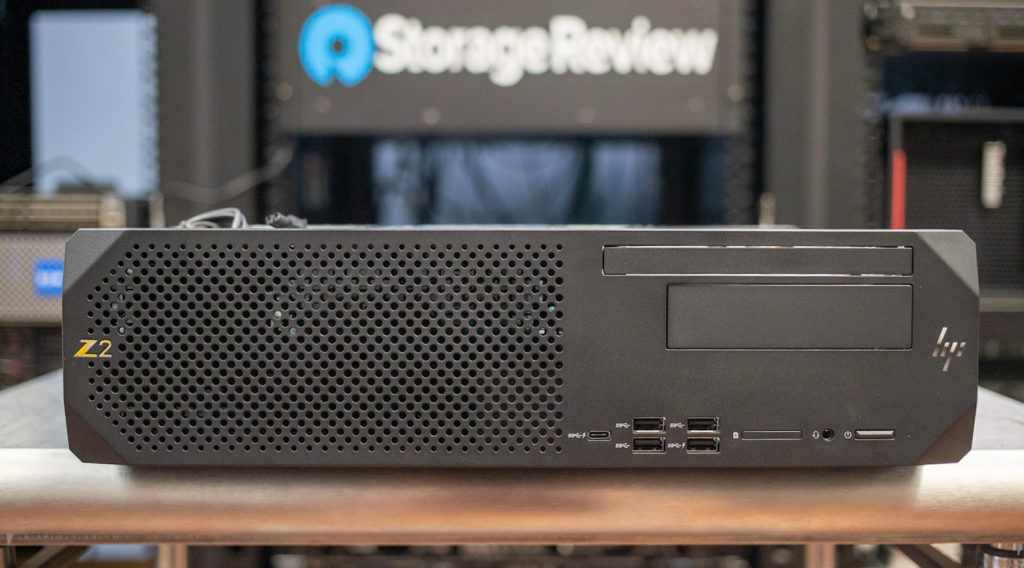 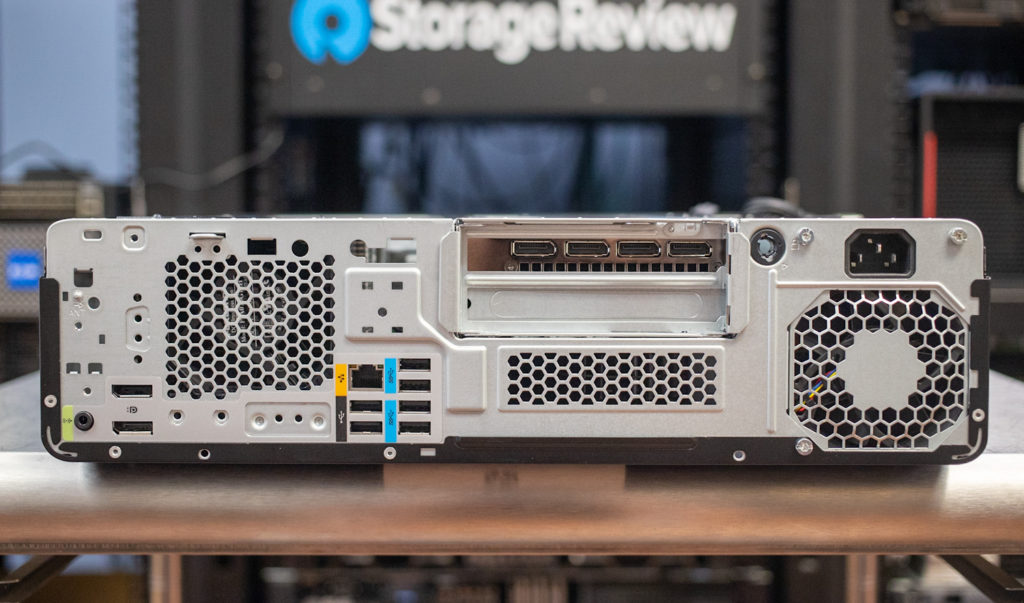 The top panel comes off for servicing. HP offers an optional tamper lock, and for added security, a Computrace BIOS module.

Working space is tight yet components are well laid out. The large CPU air cooler takes much of the space. The power supply is far right; the Z2 SFF G9 tops out at 550 watts. For storage, the 3.5-inch bay is upper right and there are three M.2 Gen4 slots on the motherboard. 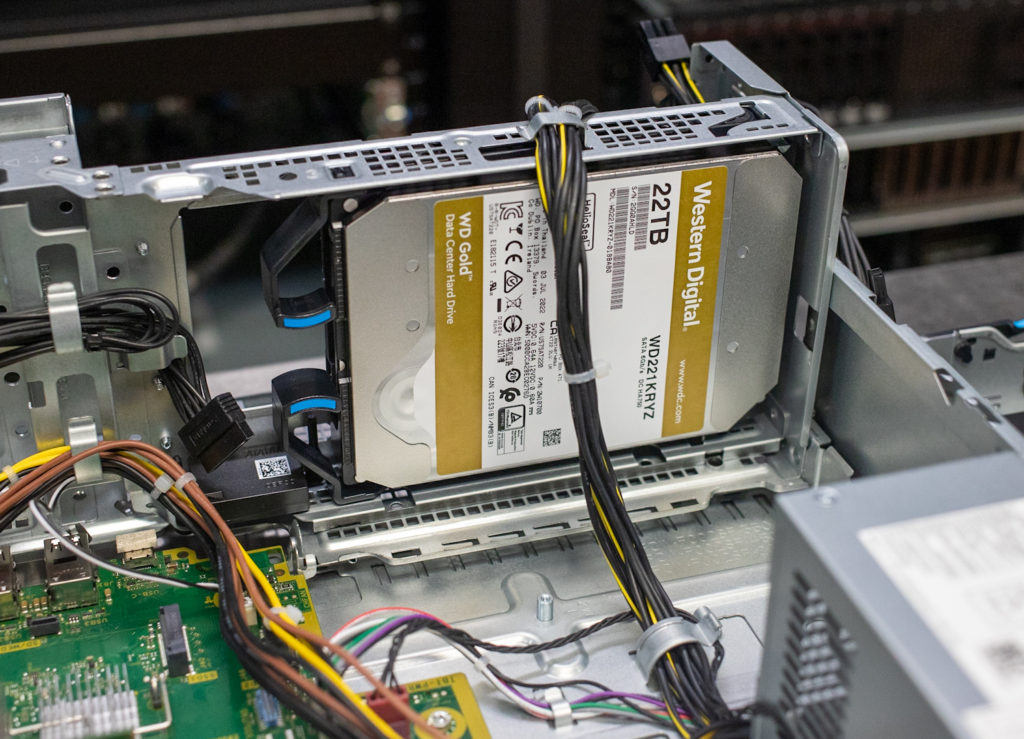 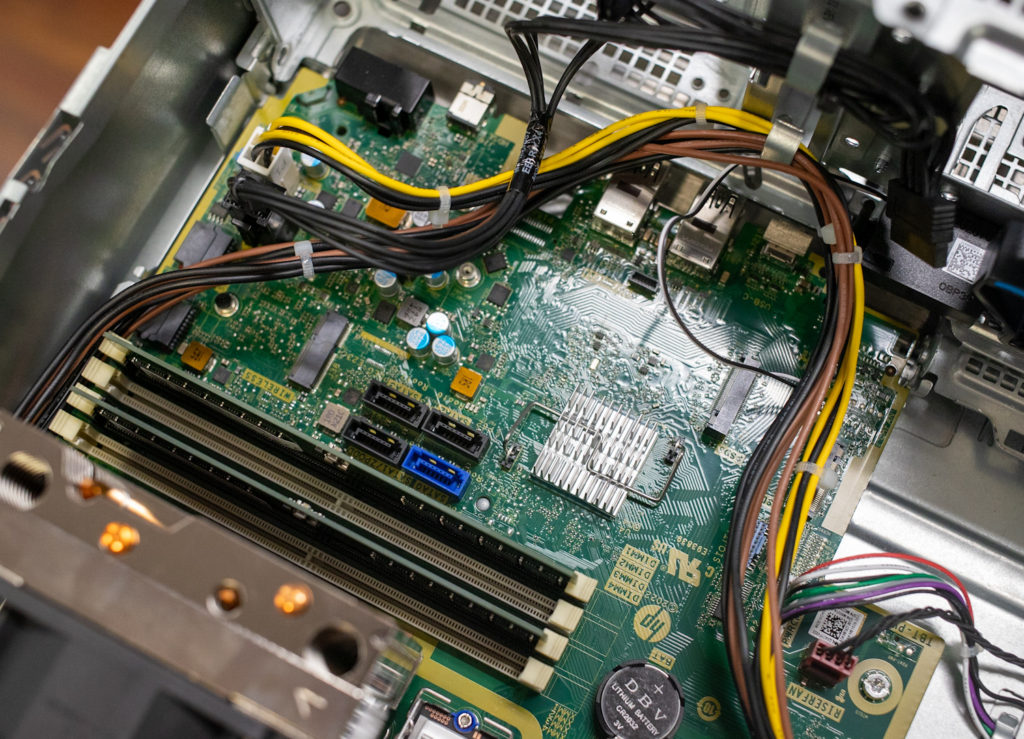 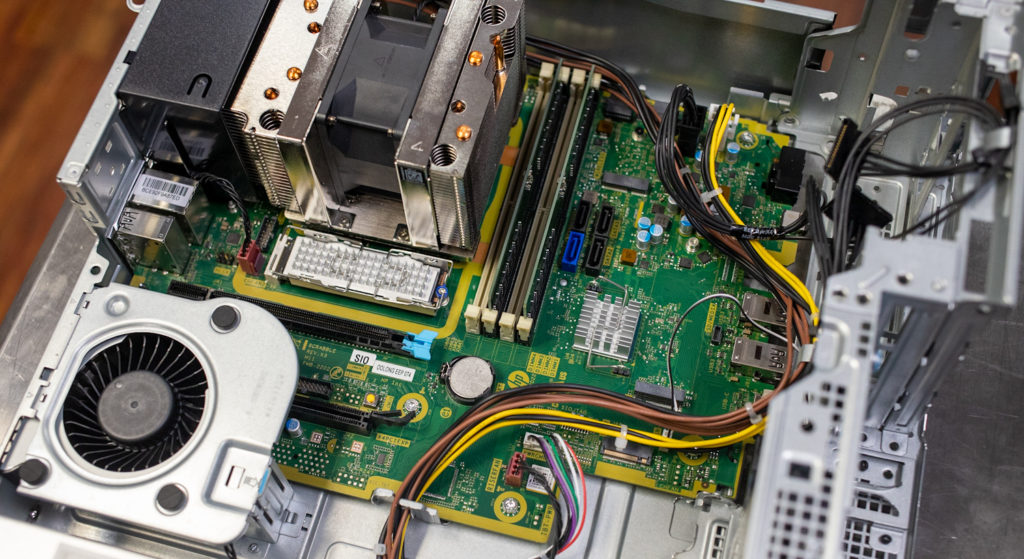 The expansion slots are only fully accessible with the graphics card and auxiliary fan module removed. Seen here, the RTX A4000 graphics card has a server-style riser card. Its blower-style cooler sends its cooling air outside the case. 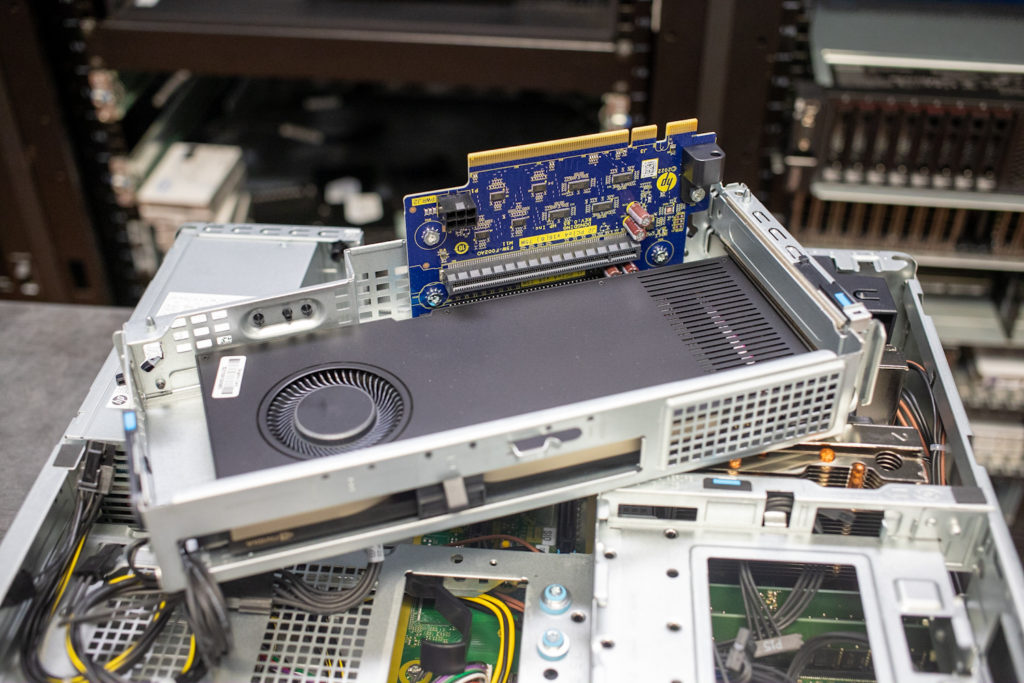 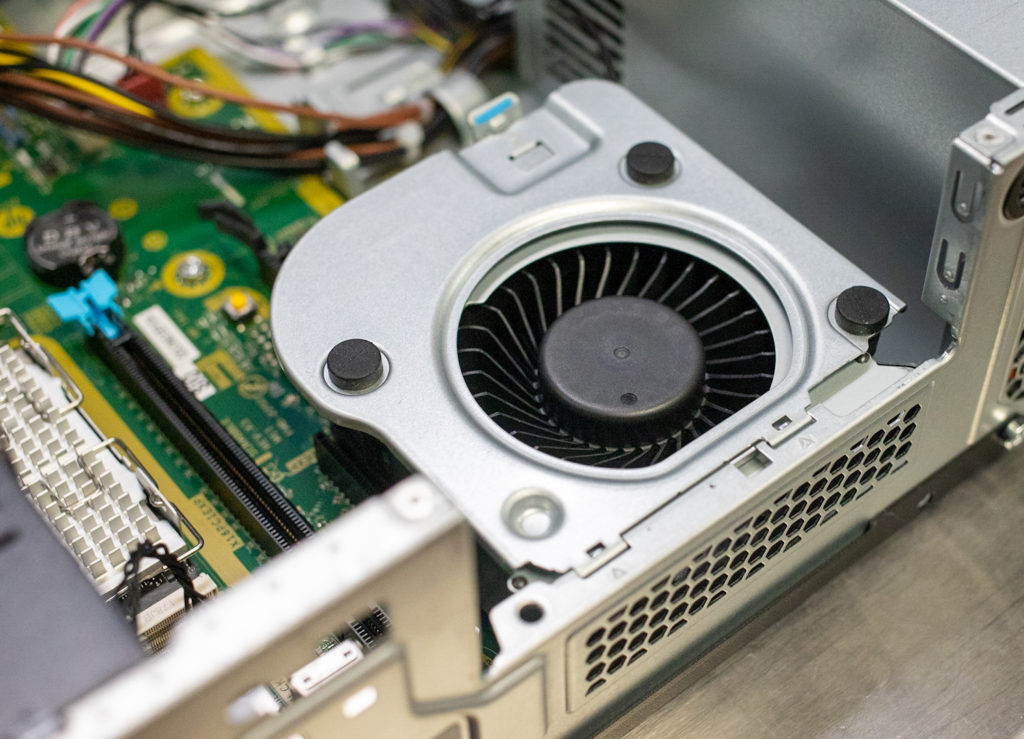 The HP Z2 SFF G9 we’re testing has the following:

This configuration is well-balanced for design work, opting for the Core i7-12700K over the hotter-running Core i9-12900K. The available 65-watt CPUs can be a better choice if you don’t need the higher sustained clockspeeds of K-class chips. Meanwhile, the RTX A4000 graphics card is the most powerful GPU this tower accepts and is the single most expensive upgrade. Getting a faster graphics card than that means stepping up to HP’s full-size Z2 G9 tower.

We are using the Intel NUC 12 Extreme Kit for performance comparisons, the only small desktop we’ve tested through our current benchmarks. It’s competitively equipped with a Core i9-12900 and an RTX A4000.

The Portland model is last, and we’re back to the Z2 SFF G9 and the NUC 12 Extreme Kit performing similarly.

LuxMark is an OpenCL cross-platform benchmarking tool from those who maintain the open-source 3D rending engine, LuxRender. This tool looks at GPU performance in the areas of 3D modeling, lighting, and video work. For this review, we used the newest version, v4alpha0. In LuxMark, higher is better when it comes to the score. The HP trailed here, possibly because its Core i7 processor has fewer cores than the NUC 12 Extreme Kit’s Core i9.

Next up is the ubiquitous Blender, an open-source 3D modeling application. This benchmark was run using the Blender Benchmark utility (OptiX enabled). The scores are samples per minute, with higher being better. Using the same graphics cards means the Z2 SFF G9 and the NUC 12 Extreme Kit again performed almost identically.

OctaneBench is a benchmarking utility for OctaneRender, which is a 3D renderer with RTX support that is similar to V-Ray. Like Luxmark, OctaneBench is large GPU-dependent, and we saw little difference between the Z2 SFF G9 and the NUC 12 Extreme Kit both using an RTX A4000 GPU.

Our last test is the popular SiSoftware Sandra 2021 suite. Higher numbers are better in all subtests. The Z2 SFF G9 showed much stronger memory bandwidth than the DDR4-equipped NUC 12 Extreme Kit, though the overall memory score was about the same. 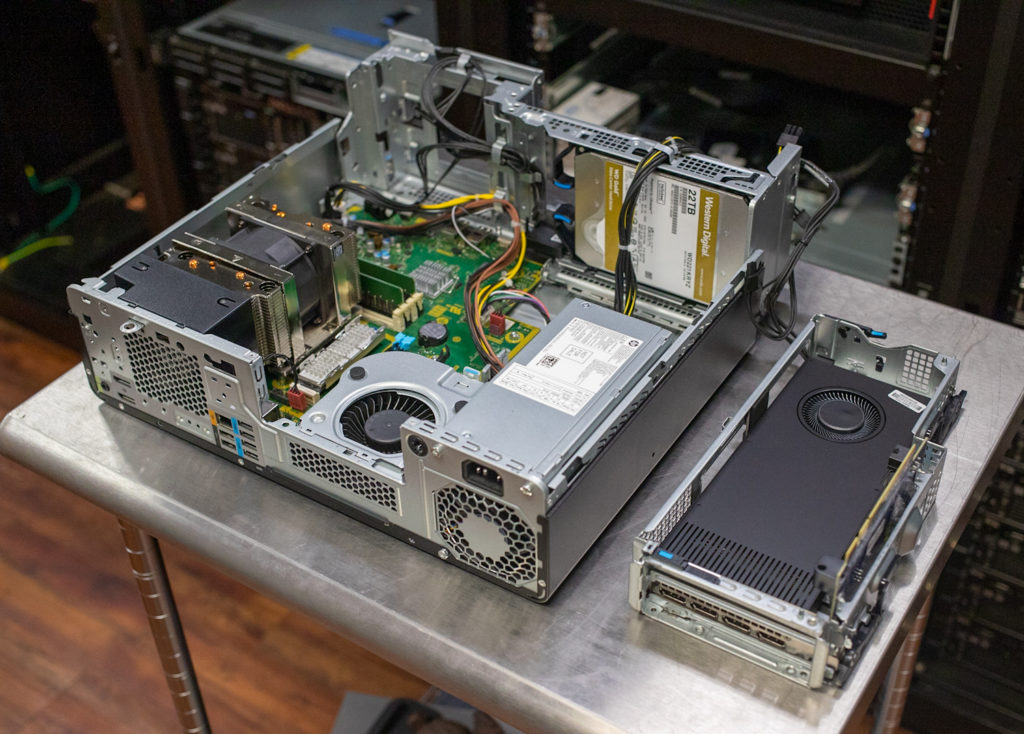 The main shortcoming of this tower is that its top graphics card is the Nvidia RTX A4000, but that’s a potent enough card for tasks with which a workstation like this would be tasked. It’s also much more GPU power than was available in the G8 version of this system. The extra blower for the GPU is a nice touch too.

As with all of their Z systems, HP supports HP Anyware (previously ZCentral REmote Boost) which is a free remote access and collaboration application. For remote teams, this can add a lot of value. Lastly, the system is easy to service and carries a 3-year warranty. For its combination of power and moderate footprint, the Z2 SFF G9 earns our recommendation for a SFF workstation tower.