The Solidigm P41 Plus is a budget-friendly PCIe 4.0 SSD designed for a range of applications such as everyday productivity, content creation, and some gaming. It features 144-layer QLC NAND, comes in the M.2 2280 form factor, and is available in capacities ranging from 512GB to 2TB.

The Solidigm P41 Plus is a budget-friendly PCIe 4.0 SSD designed for a range of applications such as everyday productivity, content creation, and some gaming. It features 144-layer QLC NAND, comes in the M.2 2280 form factor, and is available in capacities ranging from 512GB to 2TB.

Solidigm was launched by SK hynix early this year to manage the company’s recently acquired Intel NAND and SSD technology. The P41 Plus is the result of this and is a direct successor to the Intel 670p, offering a better performance profile and handy new SSD management software. 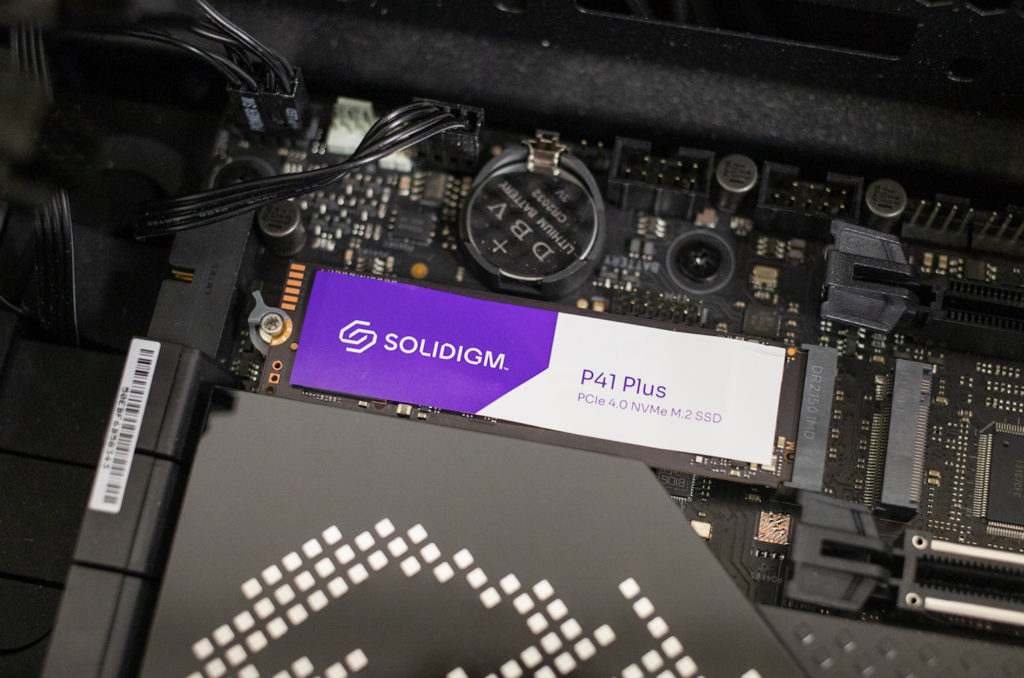 As far as performance goes, Solidigm quotes moderate transfer rates for the P41 Plus; though this is on par with what we’ve seen with other QLC-based drives. The drive is powered by a SiliconMotion SM2269XT family controller (SM2269XTF according to the board on our drive). There is no DRAM cache on this SSD.

For sequential read and write, the P41 is expected to reach up to 4,125MB/s (1TB and 2TB models) and 3,325MB/s (2TB model only), respectively. The 512GB model is quoted at 3,500MB/s read and 1,625MB/s write, which certainly puts this in the budget drive territory. It also features a 1.6 million hour Mean Time Between Failures (MTBF) rating, and while it does come with hardware encryption, it does have End-to-End Data Protection. 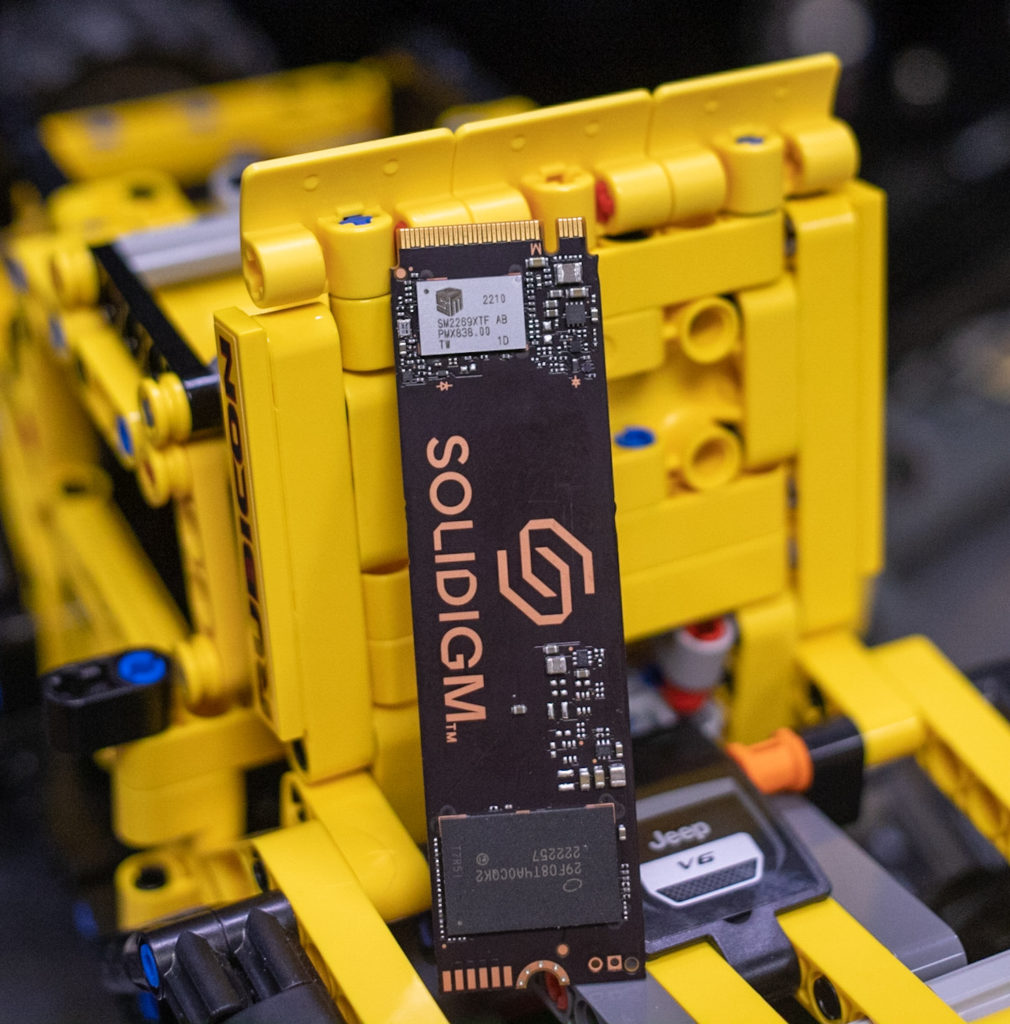 The P41 Plus also comes bundled with Solidigm Synergy SSD management software, which is composed of two different components:

Solidigm promises to keep its drives updated as frequently as possible to ensure optimal performance. In fact, they claim that the Synergy Storage Driver improved read and write speeds by (up to) 21% higher compared to the same systems running the default disk driver.

The Solidigm Storage Tool package is intuitive and features a simple easy-to-use interface. The Summary section displays at-a-glance information like the model and serial number, firmware version, protocol, manufacturer, controller, temperatures, remaining capacity, and the health status of the drive. All of this comes in handy if you need to service your drive. 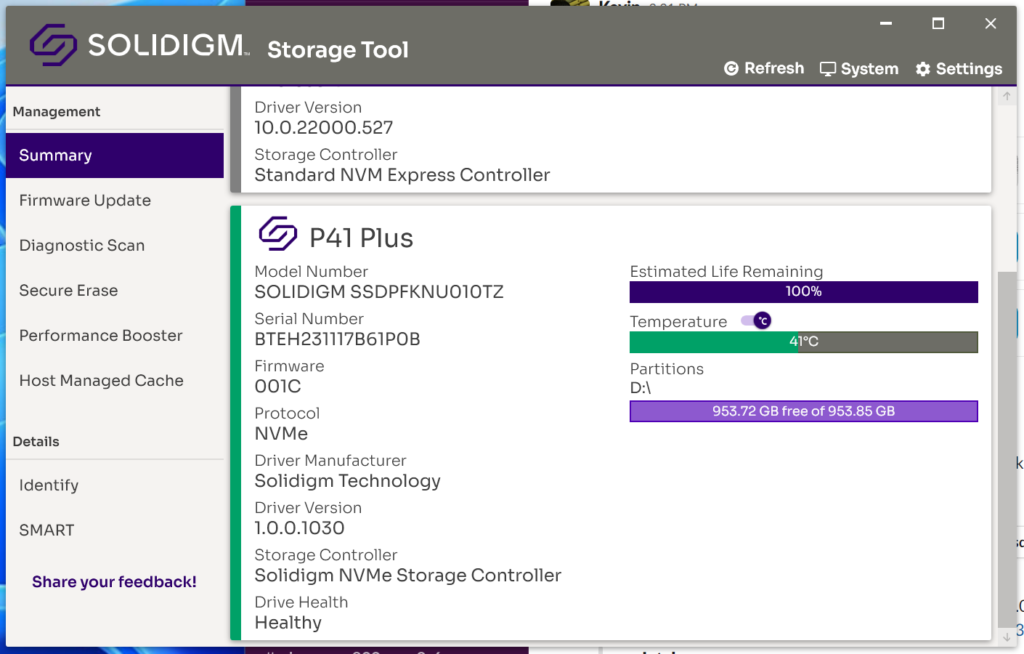 You can enable “host managed cache” here as well so it can automatically monitor usage patterns to identify high-priority data. This means it will keep the most important items in the cache, which translates to faster reads as you add more content to the P41 Plus drive. 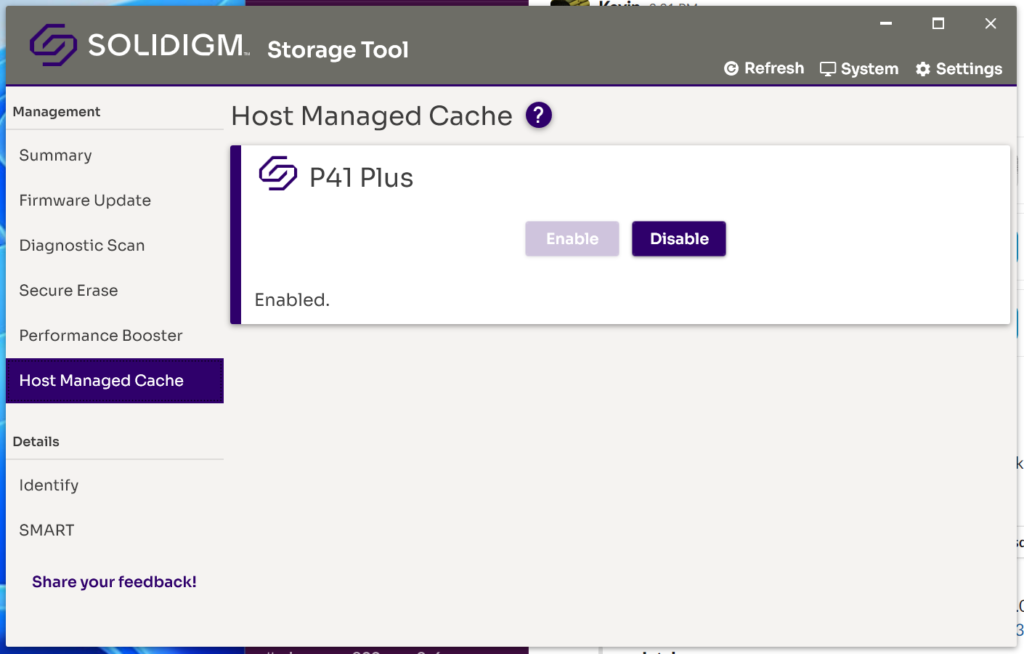 The Solidigm Storage Tool also allows you to update the firmware, try out a performance booster tool, securely erase the drive, and execute diagnostic and SMART scans. Overall, it’s a nice little piece of software to have and offers more than most other consumer drives.

Solidigm P41 Plus Pricing and Warranty 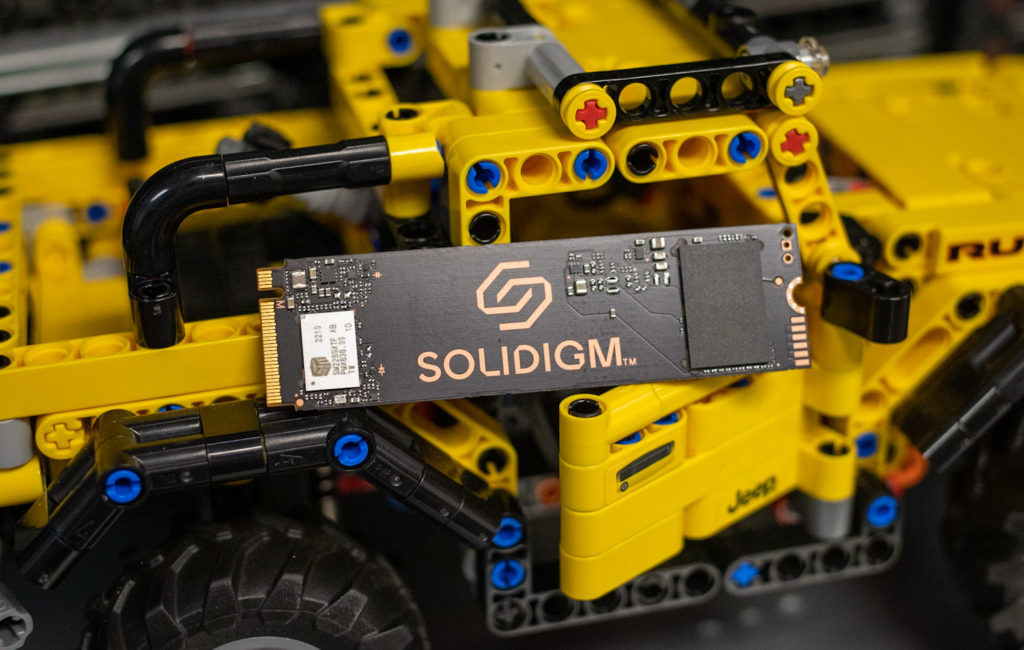 We are reviewing the 1TB version of the Solidigm P41 Plus drive and will be comparing it to the following NVMe QLC SSDs: 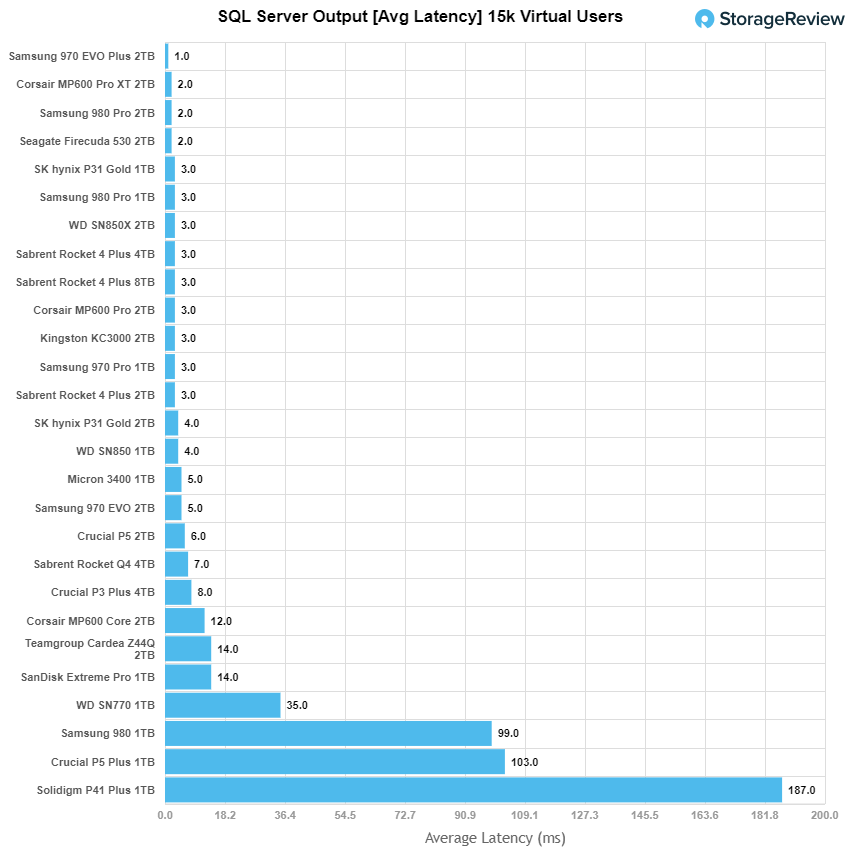 In 4K random read, the Solidigm P41 Plus showed a decent peak performance of 219k IOPS with a latency of 586.5ms before taking a slight spike at the very end.

Switching to sequential workloads, where we look at our 64K tests, the P41 Plus continued its solid performance with a peak throughput of 49.6k IOPS (or 3.1GB/s) with a latency of 436µs. This was good enough to slightly trail the Teamgroup and Sabrent QLC drives.

In 64K sequential writes, the P41 Plus fell back a bit, and only had slightly better performance than its predecessor, the Intel 670p. Here, it posted a peak score of 44k IOPS or 2.77GB/s at a latency of 352.7µs.

Next, we looked at our VDI benchmarks, which are designed to tax the drives even further. These tests include Boot, Initial Login, and Monday Login. Starting with Boot, the Solidigm P41 Plus had a peak of exactly 54k IOPS with a latency of 614.2µs, which was well back of the leaders but still much better than the Crucial P3 Plus.

As evident below, our VDI Initial Login produced some messy results across the board in our charts. Nonetheless, the P41 Plus topped out at 39k IOPS (at 767.2ms) before it took then took a spike in performance at the end.

Finally, VDI Monday Login saw the P41 Plus peak at 28K IOPS (then spiking at the end) with a latency of 560µs before showing a slight dip at the very end.

Lastly is our Blackmagic transfer speed test, where we measure transfer speeds with the “host managed cache” option enabled and turned off. 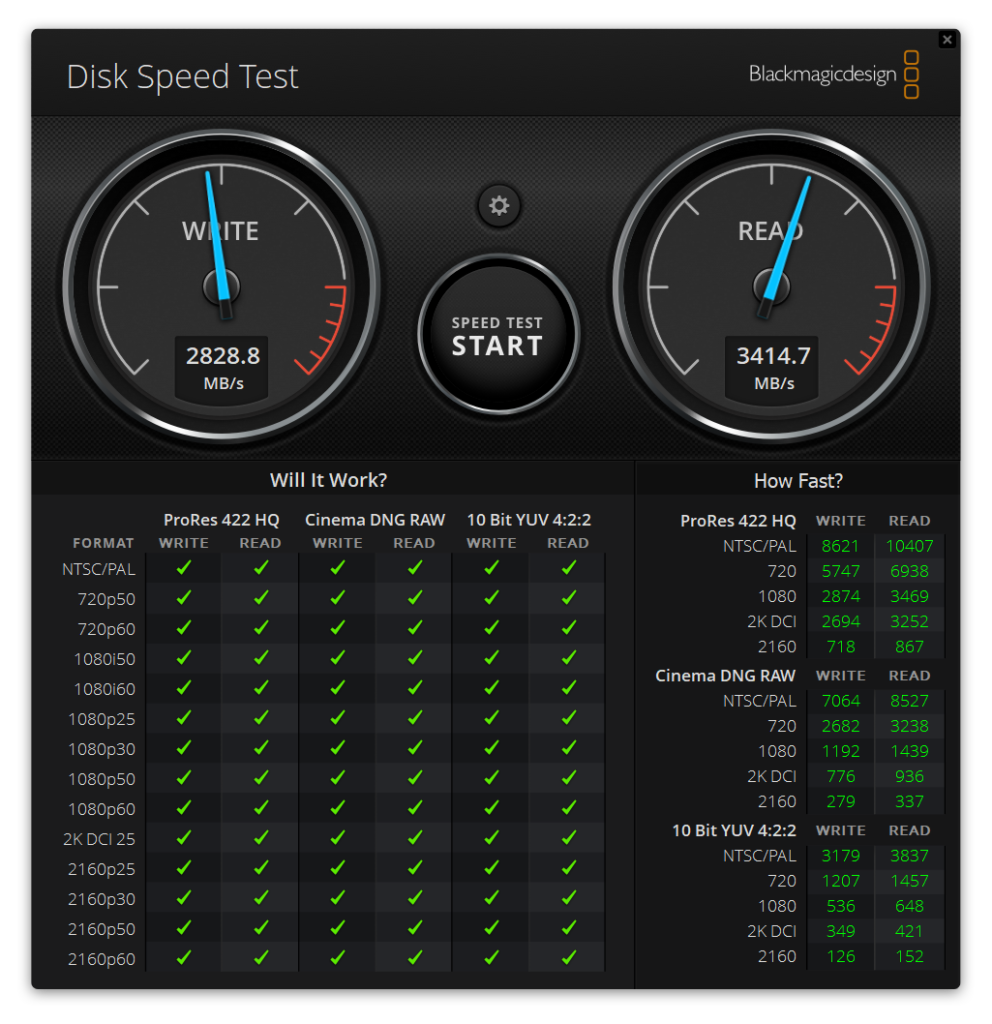 When disabled, it posted noticeably slower read performance at 2,582.9MB/s read while writes remained (as expected) relatively the same at 3,410.1MB/s write. 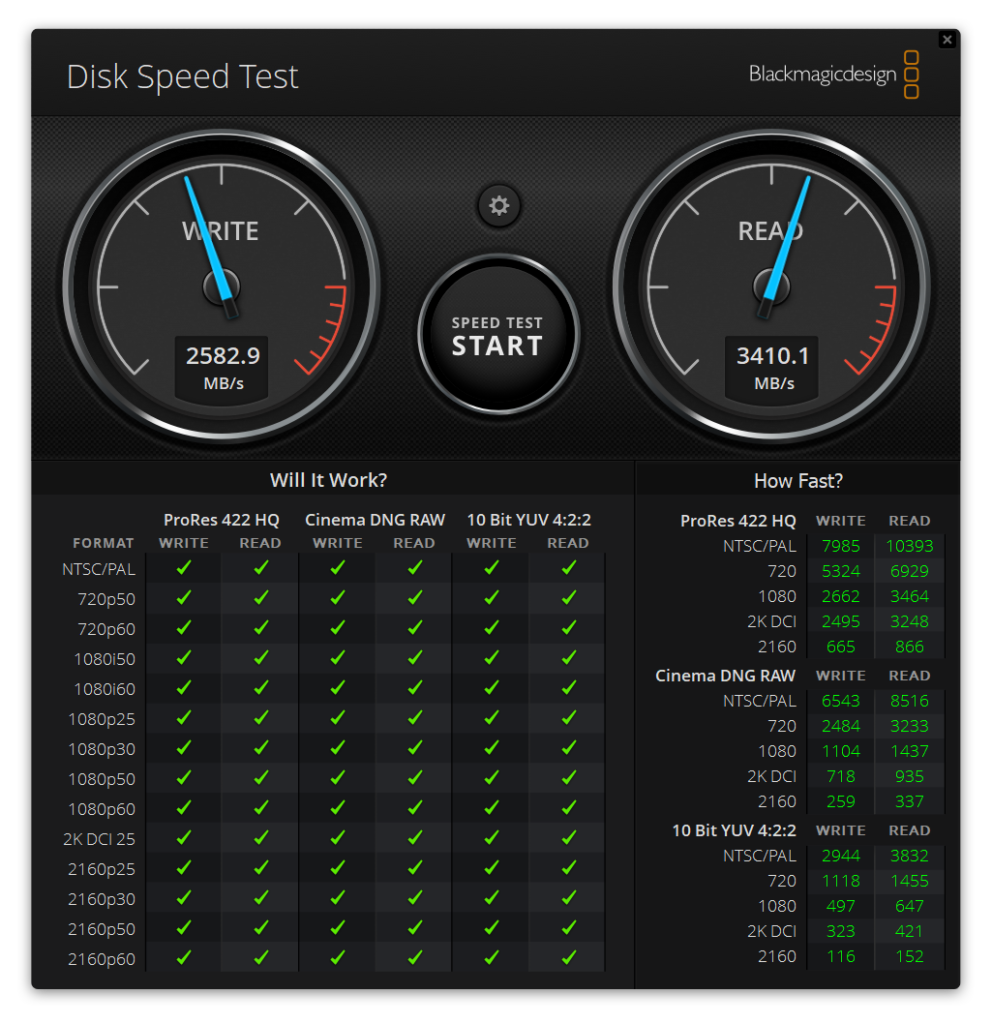 The Solidigm P41 Plus is a solid budget consumer Gen4 SSD for everyday productivity and light content creation/gaming use cases. Like its predecessor, the Intel 670p, it features 144-layer QLC NAND in the M.2 2280 form factor. It also comes with handy drive and SSD management software, Solidigm Storage Tool and Synergy Storage Driver, respectively, and is available in capacities of 512GB, 1TB, and 2TB. 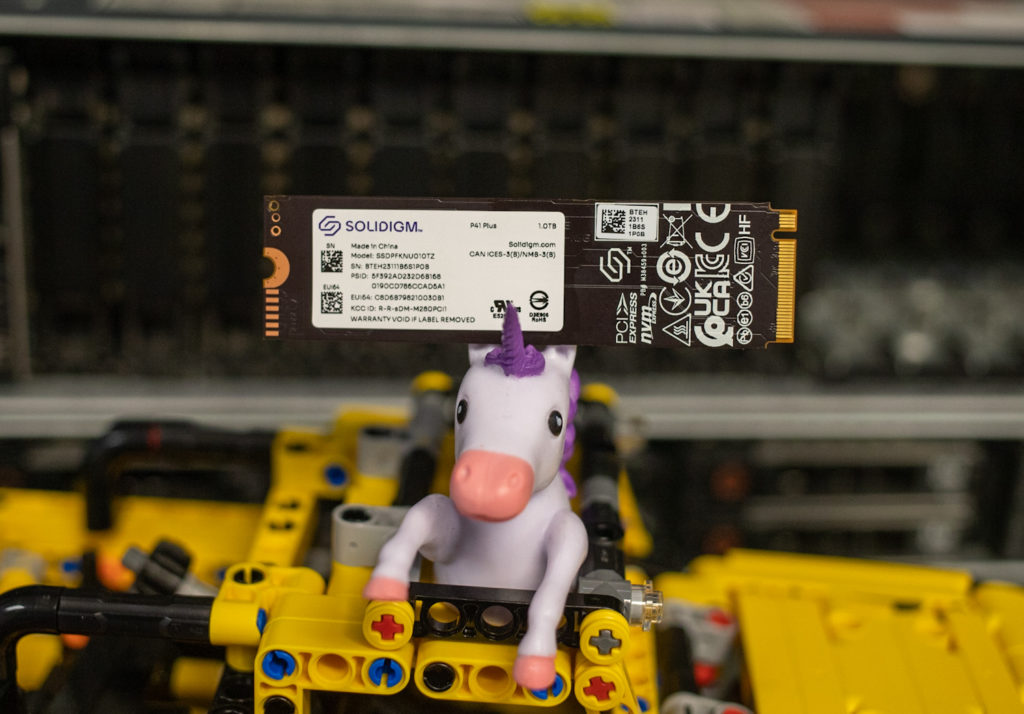 The P41 Plus showed mid-range results during our VDI benchmarks, tests of which tax the drives even further. With our Boot profile, the Solidigm P41 Plus had a peak of exactly 54k IOPS, while initial and Monday login tests topped out at 39k IOPS and 28k IOPS, respectively. That said, it fared very poorly in SQL server performance (though this drive certainly isn’t meant for intensive workloads, it is interesting data). 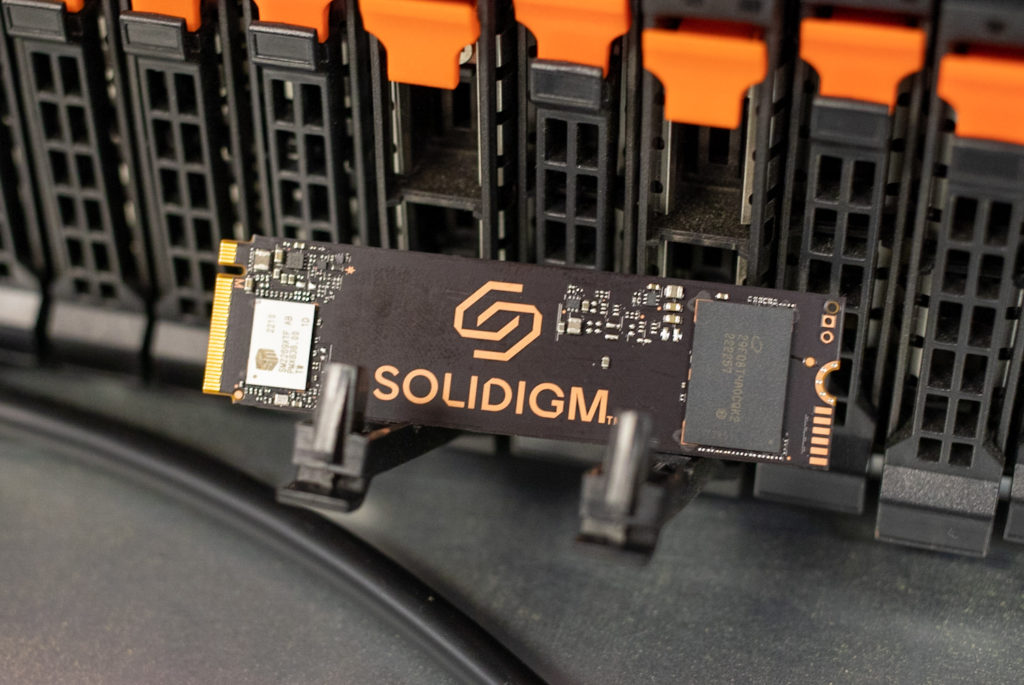 We also put it through our usual Blackmagic transfer speed test, where we measured performance with both the “host managed cache” option enabled and disabled. For the former, the Solidigm P41 Plus was able to reach 2,828.8MB/s read and 3,414.7MB/s write while posting noticeably slower read performance at 2,582.9MB/s read (writes remained relatively the same at 3,410.1MB/s write) with cache disabled. For systems that support this option, the exercise might be worth the effort.

Though it doesn’t stand out too much among the other PCIe Gen4 QLC drives out there, the P41 Plus offers a noticeable uptick in performance compared to the Intel 670p. At just $50 for the 512GB model and $90 for the 1TB model, the P41 Plus is a solid overall release by Solidigm, making it a great choice for general consumers looking to add an affordable, everyday-use drive to their rig.

P41 Plus at Amazon