Announced back in December 2020, the Intel Optane Memory H20 is the latest release of the company’s unique hybrid technology designed for notebooks and mobile devices. Like its predecessor, the H20 combines Optane with QLC NAND on a single M.2 2280 drive to deliver higher performance without the higher cost. The Intel H20 offers up to 1TB of QLC and up to 32GB of Optane while targeting areas like office productivity, content creation, and gaming experience.

Announced back in December 2020, the Intel Optane Memory H20 is the latest release of the company’s unique hybrid technology designed for notebooks and mobile devices. Like its predecessor, the H20 combines Optane with QLC NAND on a single M.2 2280 drive to deliver higher performance without the higher cost. The Intel H20 offers up to 1TB of QLC and up to 32GB of Optane while targeting areas like office productivity, content creation, and gaming experience.

While it does target the consumer demographic, the H20 will not be purchasable in online stores and will only be available through OEMs like HP, Dell, and so on. Like the H10 before it, these systems will be marketed as Optane-enabled or some other moniker that lets the buyer know that the configuration leverages at least a little bit of Optane inside.

Technically speaking, the H20 isn’t a lot different than the H10 before it. It’s still essentially a portion of Optane Memory in front of a 670P QLC-SSD. This combination will allow Optane to leverage its low latency and high performance at low queue depth workloads with mixed random read/write speeds with QLC’s low cost and smaller footprint. QLC is known as a low-cost, moderately-performing, so for mainstream users, this is an ideal blend between two storage technologies. 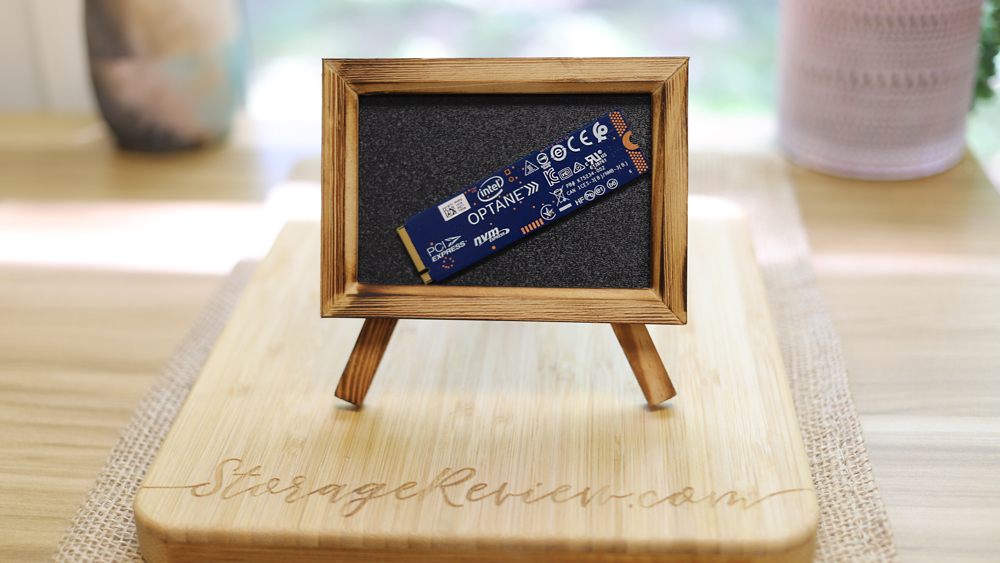 Intel is now on its third generation of Optane persistent memory, so there are some performance differences between this and the last generation. The underlying QLC-SSD is much better too in the H20, going from the 660P to the 670P is significant. To help manage the drive, the H20 features an upgraded Intel Optane Memory Media and NAND controller. Pyrite 2.0 Security is also a new addition to the hybrid solution. 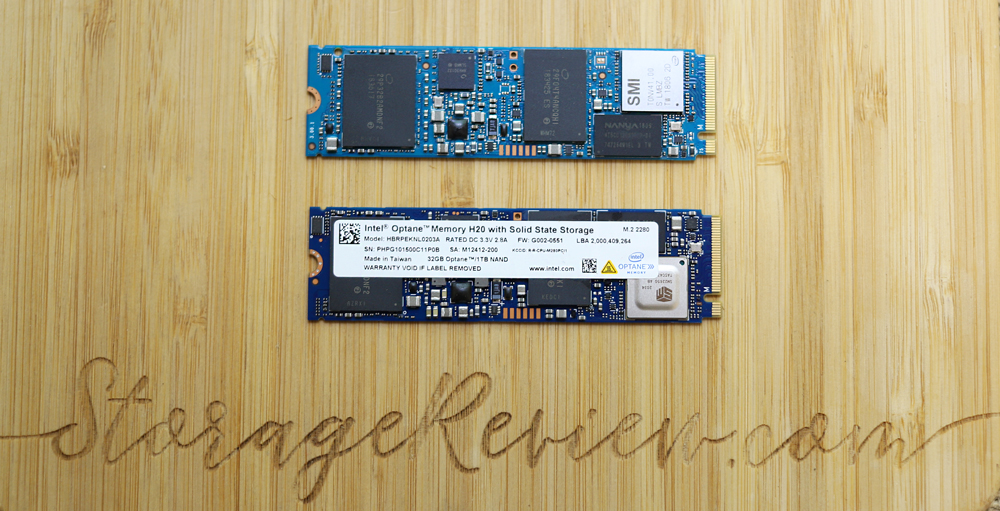 These upgrades from the H10 generation lead to a better performance profile in the H20. The H20 is capable of potential sequential read and write speeds of up to 3,300MB/s and 2,100MB/s, respectively. This is a significant increase over the H10’s quoted 2,400MB/s read and 1,800MB/s write.

Intel anticipates that most consumer activity is expected to occur in low queue depths where the Optane Memory shines; in fact, Intel claims that roughly 90% of all application workloads operate at this level and is predominately random. Random 4K performance (queue depth one) is quoted at a potential 65,000 IOPS read and 40,000 IOPS write by Intel, which is another significant leap over the H10’s 32,000 IOPS read and 30,000 IOPS write.

Intel also has made the H20 more power-efficient with a typical average of 170mW with an idle output of 35mW.

To gauge the performance of the Intel Optane Memory H20, we will put the drive through a range of tests and compare results to the H10. We installed both drives inside an HP Spectre x360 2-in-1 laptop, which features the following highlights:

To keep the test results as consistent as possible between the two generations of Optane drives, we cloned the H10 off the H20, so both were identical in driver versions and installed software base. Capacities shown in our CrystalDiskMark photos are smaller than the 1TB H20 and 512GB H10 capacities would indicate, but this is a result of shrinking the partition to allow a simple clone operation. 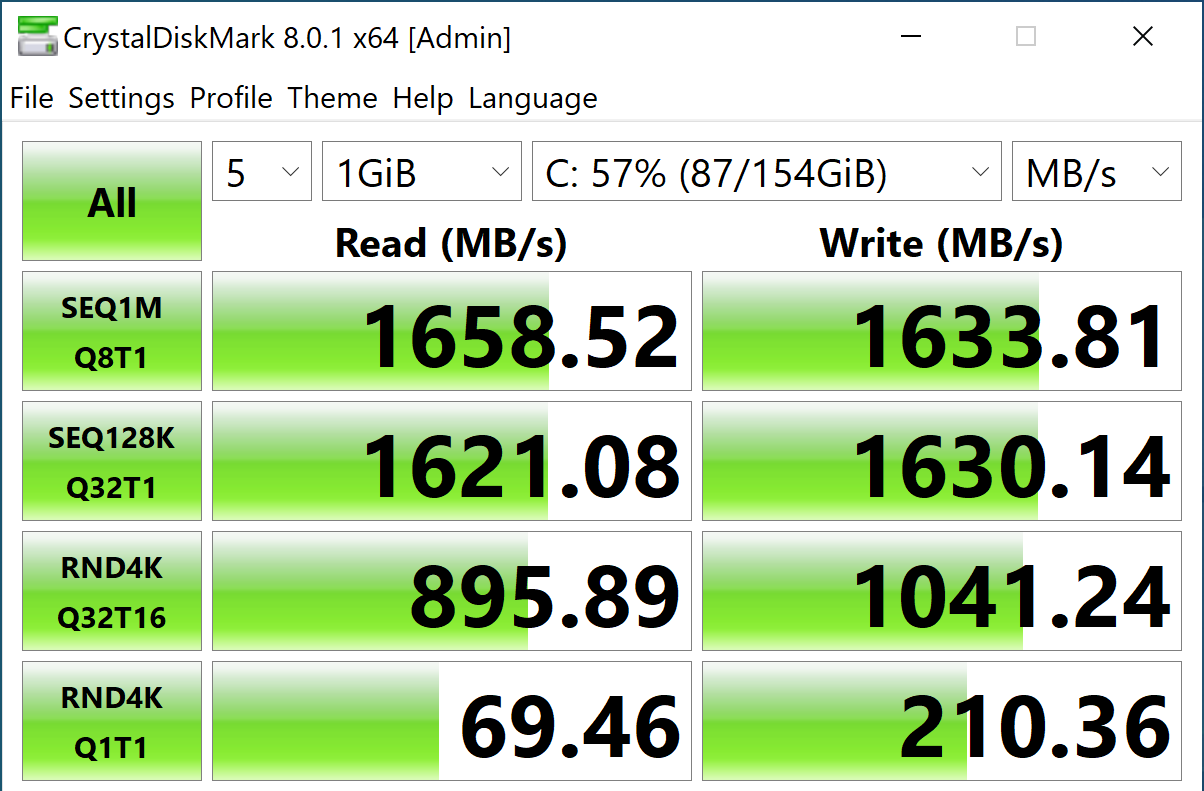 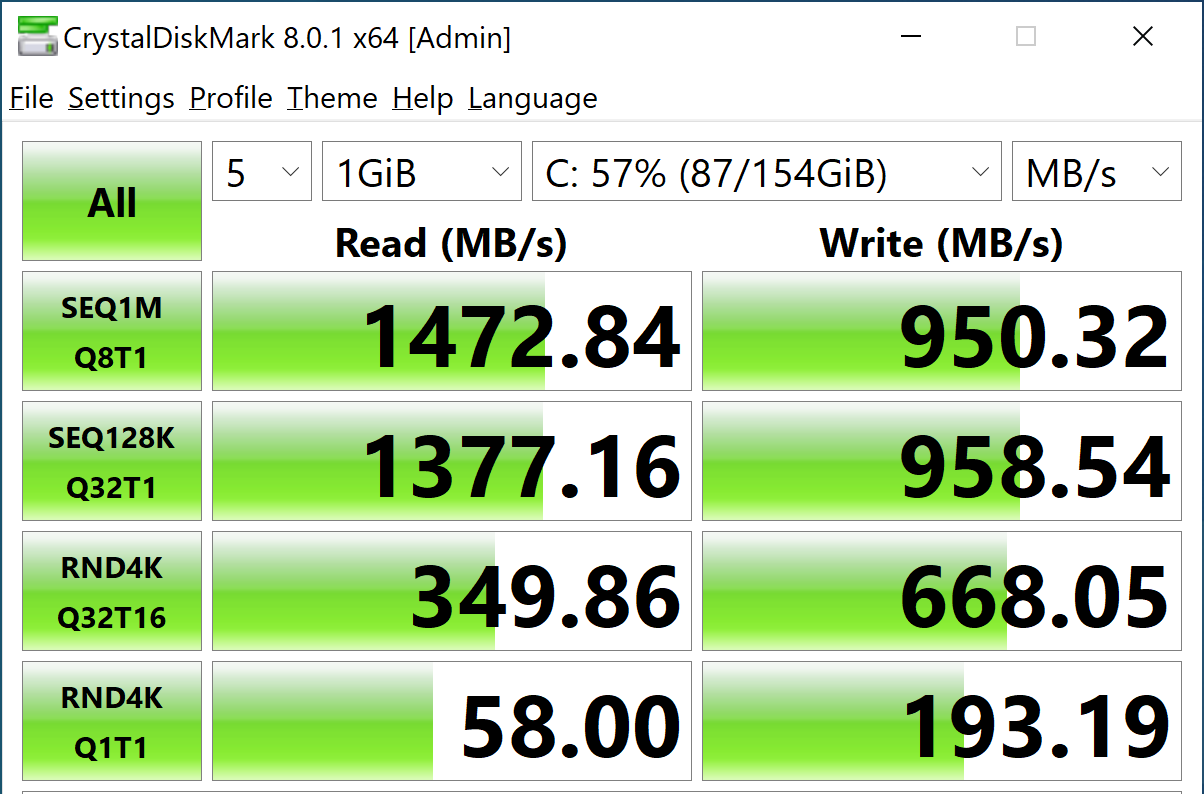 Next, we will look at performance with Optane turned on, which will be how the drives will be enabled. 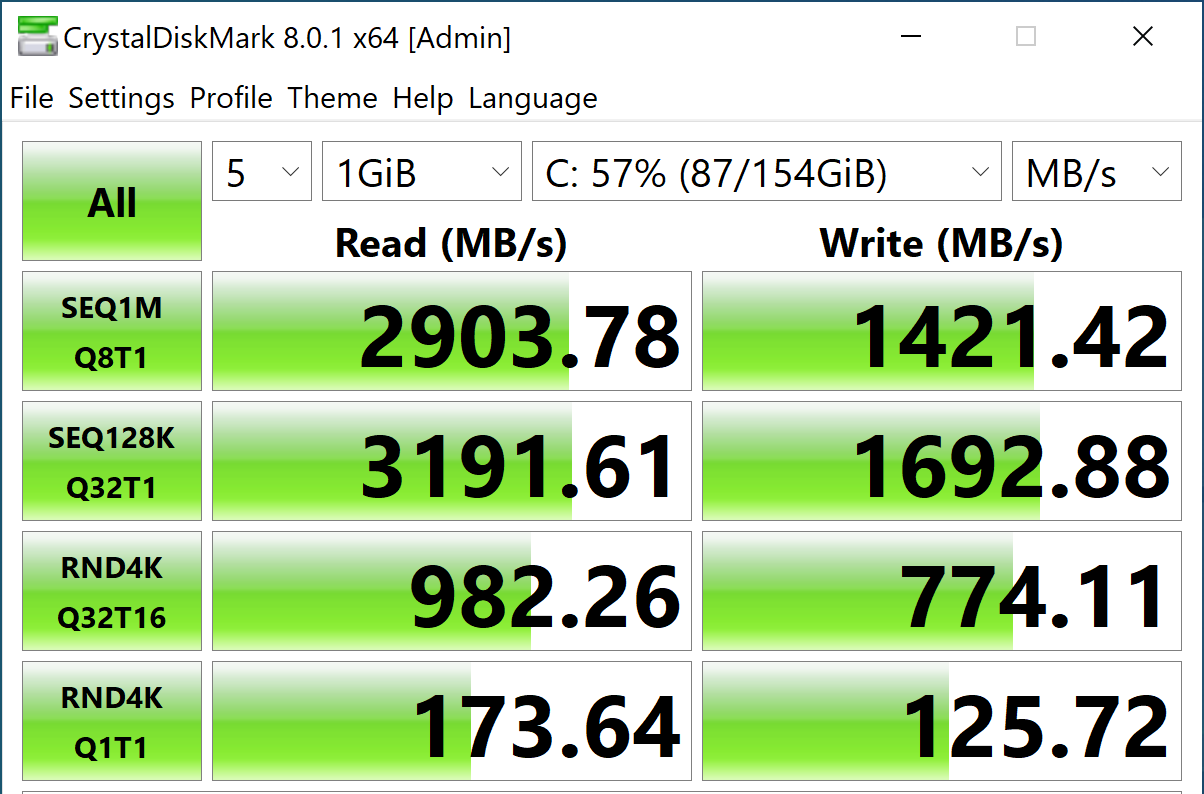 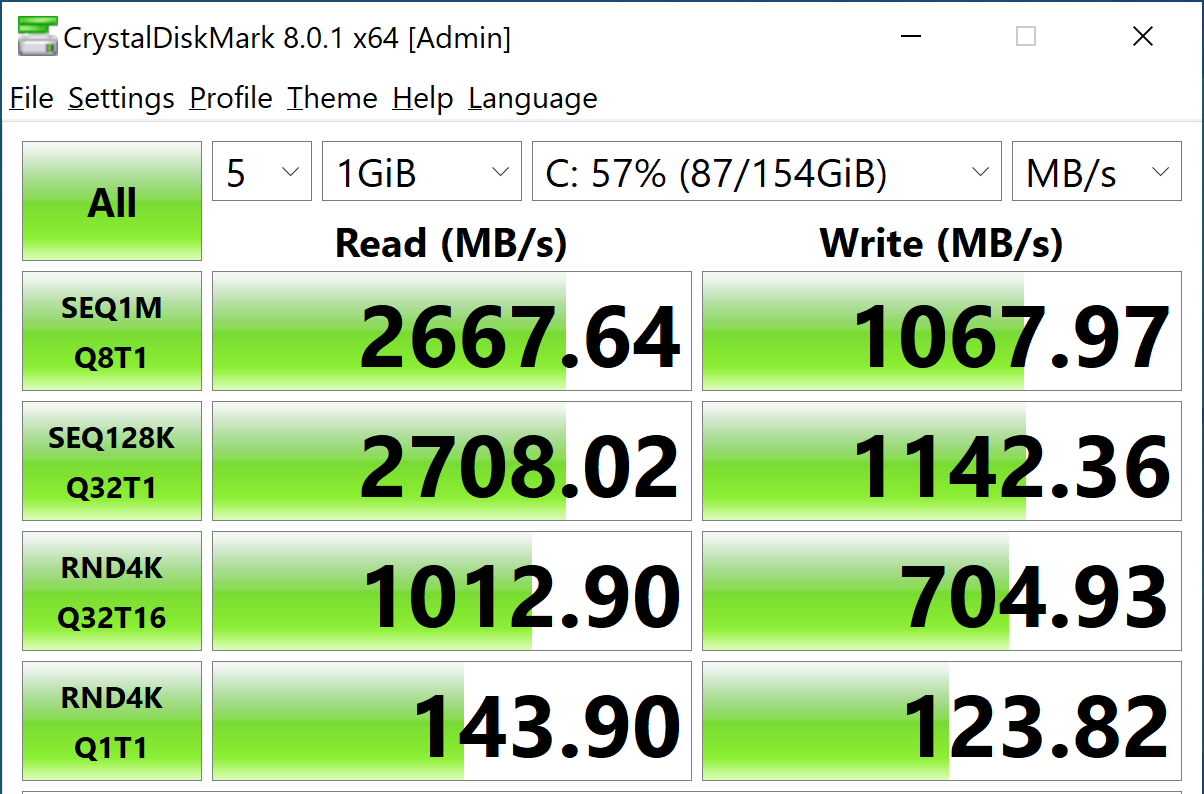 Comparing both the previous-generation Intel H10 to the current-generation H20, we see solid improvements on the new model in sequential read and write speeds which mostly comes through from the better underlying QLC drives. When it comes to Optane improvements, both drives do see good gains from cache off to cache on, although what’s interesting is you see some of the weakness of a small Optane module on the 4K random write numbers, where the QLC drive with its SLC cache can squeeze out a little more performance. This gets exhausted quickly as the workload size increases, but it is an interesting nuance of the drive. The 4K random read and sequential random read figures are the biggest bang that most users will feel in daily use (application load and boot times) and those see big improvements from Optane.

Lastly, we put the drives through PCMark10, a system benchmark for Windows PCs with a focus on modern office tasks. It offers a variety of workloads categorized into three groups. The Essentials group includes web browsing, video conferencing, and app start-up time. The Productivity group includes tests based on spreadsheets and writing. The Digital Content Creation group includes photo editing, video editing, and a rendering and visualization test. We set Optane on for both drives in this test.

Here (inside the HP Spectre x360), the H20 showed solid results with an overall score of 5,051, which comprised 9,894 in essentials, 6,585 in productivity, and 5,367 in digital content. The latter score was hindered a bit by the graphics and ray tracing likely due to limitations of the graphics card inside the laptop (Intel Iris Xe Graphics). 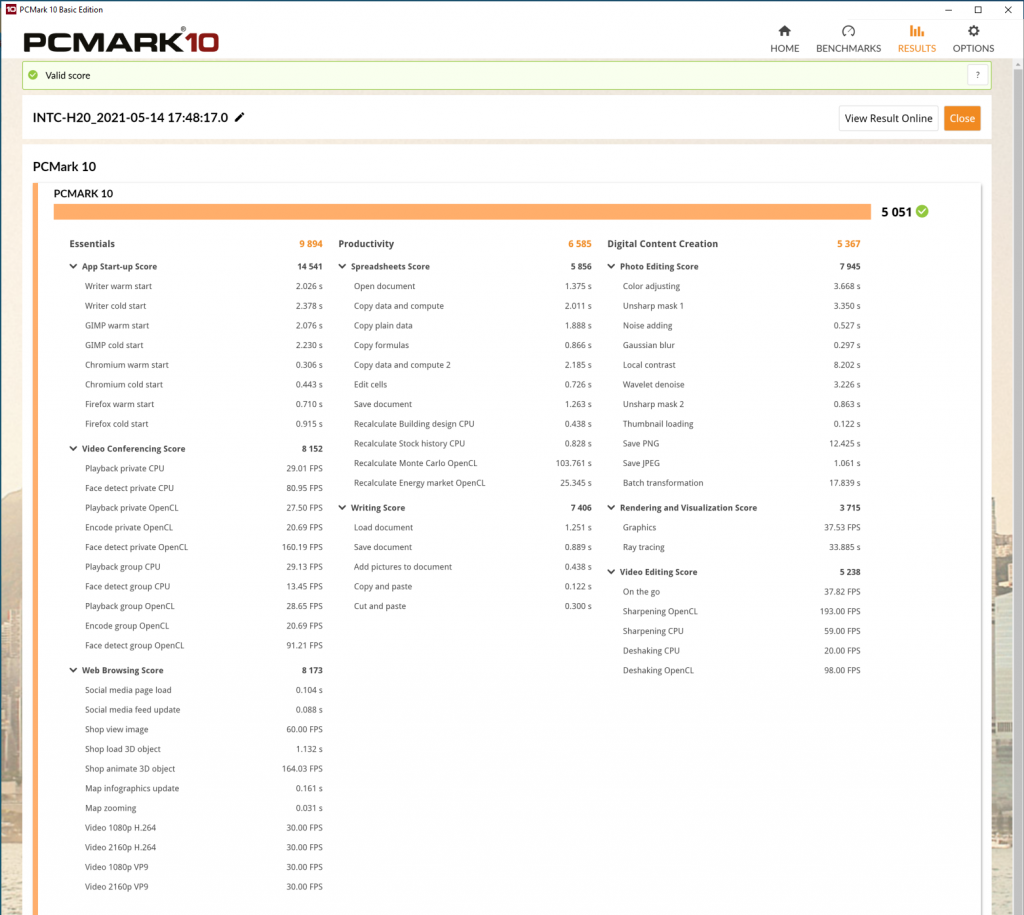 The H10 posted an overall score of 5,005 in the PCMark10 test, which comprised 9,522 in essentials, 6,678 in productivity, and 5,351 in digital content creation. The overall scores are actually really close here. One thing to note, however, is the App start-up scores that are much higher in the H20 version. While hard numbers are close, the actual feel of the new drive in the same laptop will result in a better user experience. 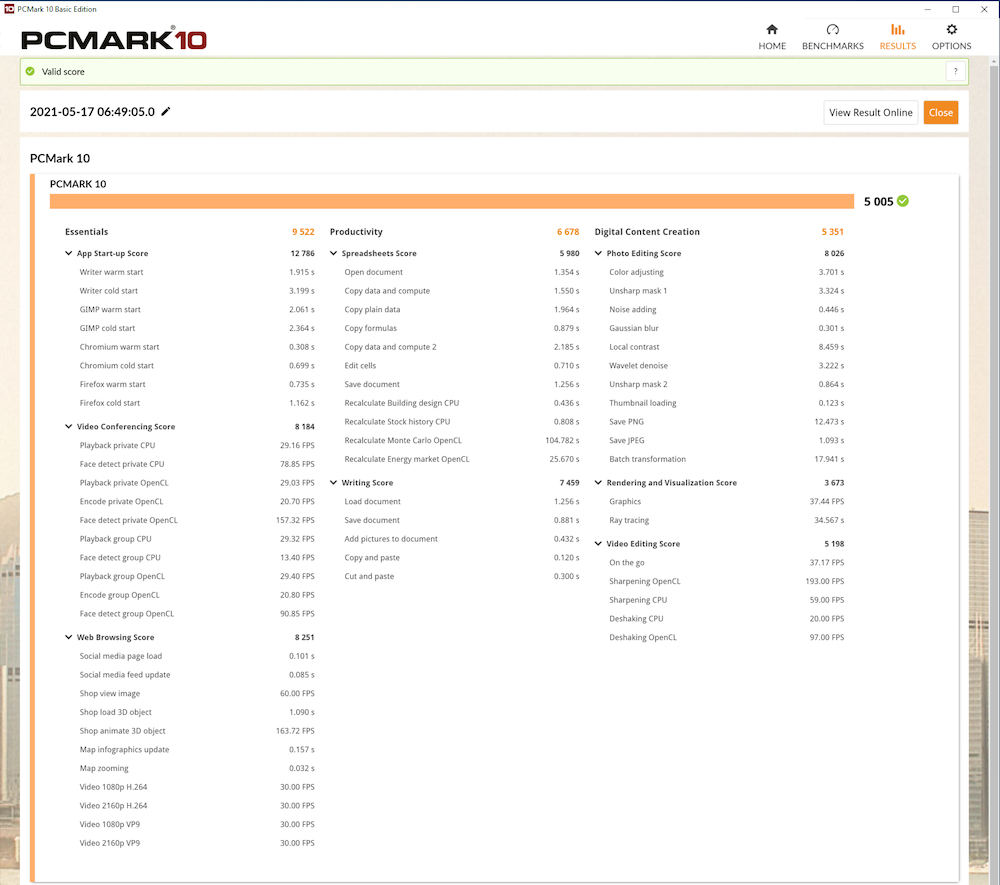 Designed for notebooks, all-in-one PCs, and small form factor systems, the Intel H20 is the next iteration of the company’s hybrid SSD for 11th Gen Intel Core CPU-based platforms. This unique marriage high-performing Intel Optane Memory between the cost-effective Intel QLC all fit on a compact single-sided M.2 SSD that leverages the NVMe interface. Those who need an affordable storage solution that can compensate the inherent performance limitations of QLC NAND with the performance boost of Optane will benefit most from the new Intel release. Ultimately, the goal of the H20 is to offer end-users the same capacity and performance of a standard SSD but at a lower price tag. 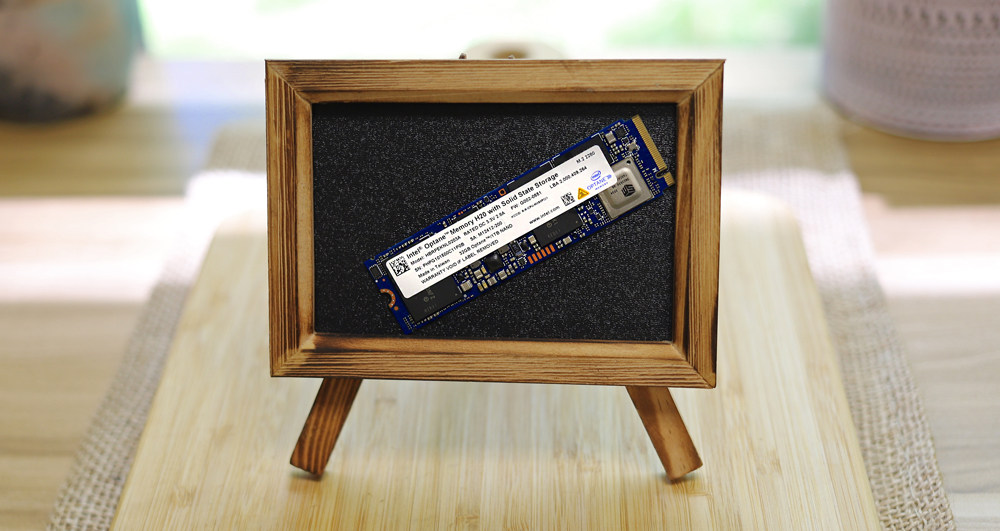 As far as functionality goes, nothing has changed since the previous model. Because this is an OEM product that will be available inside complete solutions from major brands like HP, Dell, and Asus, the consumer might not even know their laptop is using these hybrid SSDs. Moreover, Intel’s Rapid Storage Technology (RST) automatically does all the caching of data in the background without any user intervention. This means consumers won’t have to worry about managing the drive; however, more advanced users certainly have the option to set preferred applications and files to the Optane Memory component as needed.

While traditional QLC drives offer low-cost, high-capacity models at the expense of write performance, and TLC drives offer better performance at a higher price tag, the Intel H20 provides a nice blend of performance and affordability. Without trying to punch too far above its weight class, the H20 fills the gap between low-cost QLC and midrange-performance TLC SSDs.