Lenovo has unleashed the newest version of ThinkStation P620, which was the industry’s first Threadripper Pro workstation when it was initially released back in 2021. When we first looked at the ThinkStation P620, we saw huge performance boosts to the workstation sphere (via a single socket no less), making it a must-buy for high-end professionals. Now the system has been updated with support for the AMD Ryzen Threadripper PRO 5995WX processor and support for two NVIDIA RTX A6000 graphics cards.

Lenovo has unleashed the newest version of ThinkStation P620, which was the industry’s first Threadripper Pro workstation when it was initially released back in 2021. When we first looked at the ThinkStation P620, we saw huge performance boosts to the workstation sphere (via a single socket no less), making it a must-buy for high-end professionals. Now the system has been updated with support for the AMD Ryzen Threadripper PRO 5995WX processor and support for two NVIDIA RTX A6000 graphics cards. 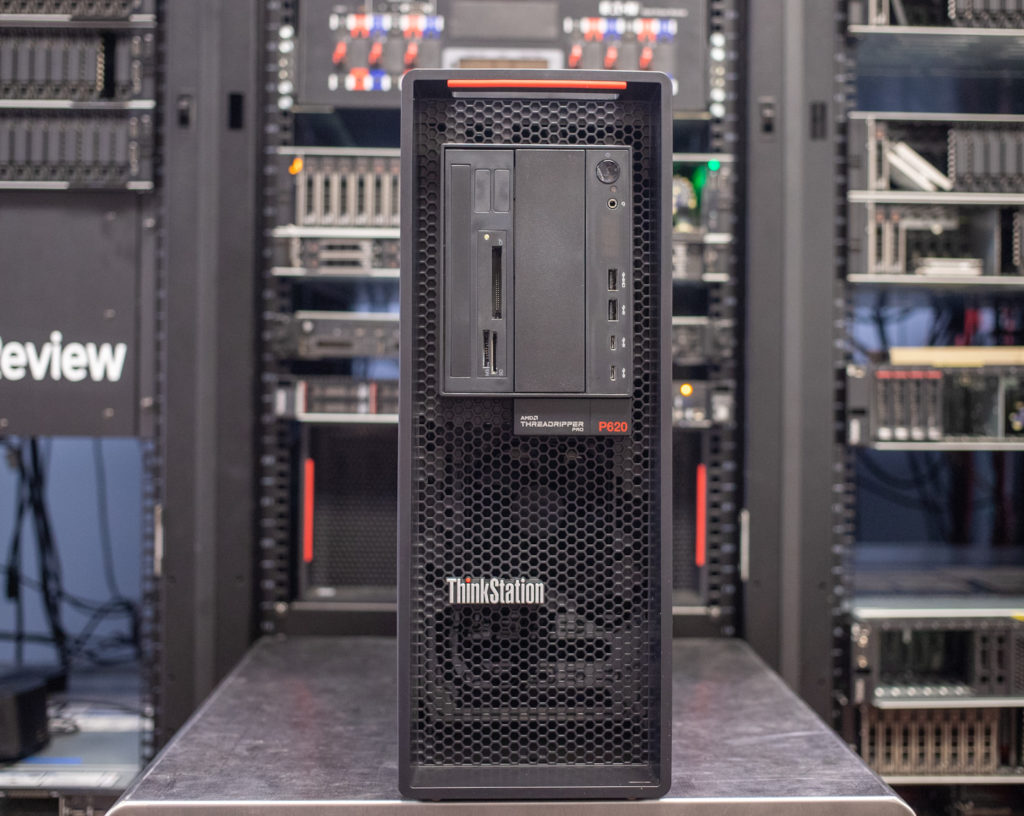 The P620 was already an impressive desktop workstation when we initially reviewed it in early 2021, so the addition of AMD’s new generation of CPUs will certainly help it further outperform its competition. And while there are significant advances in performance with the “Zen 3” architecture, power consumption and TDP remain the same.

The following table is a comparison between the clock speed of two generations of CPUs used inside the older and new P620:

For memory, the total amount of 3200MHz ECC RDIMM that can be added is a healthy 1TB (via 8 DDR4 DIMM slots). It should be noted AMD does not yet support DDR5 in this processor class.

Users can add populate five 3.5-inch bays with the ability to add up to eleven M.2 SSDs (on board: up to 4TB each, M.2 to PCIe adapter: up to 2TB each). Lenovo’s configurator for storage is a little weird, you can only select 4TB HDDs for instance. The system should be just fine with larger HDDs or SSDs if you so choose. Like the DDR being a half-step behind, there’s no Gen5 storage support in this system either.

Another big component that makes the P620 a power contender is the support for the newest professional GPUs available. Users can add up to two NVIDIA RTX A6000 48GB GPUs, which feature 10,752 CUDA processing cores and 84 next-generation RT cores for top-class performance in both real-time ray-tracing and professional final frame ray-tracing output. Users also have a range of other GPU options ranging from entry-level cards to higher-end RTX GPUs. Internal cabling for the GPUs is in place and pretty tidy. 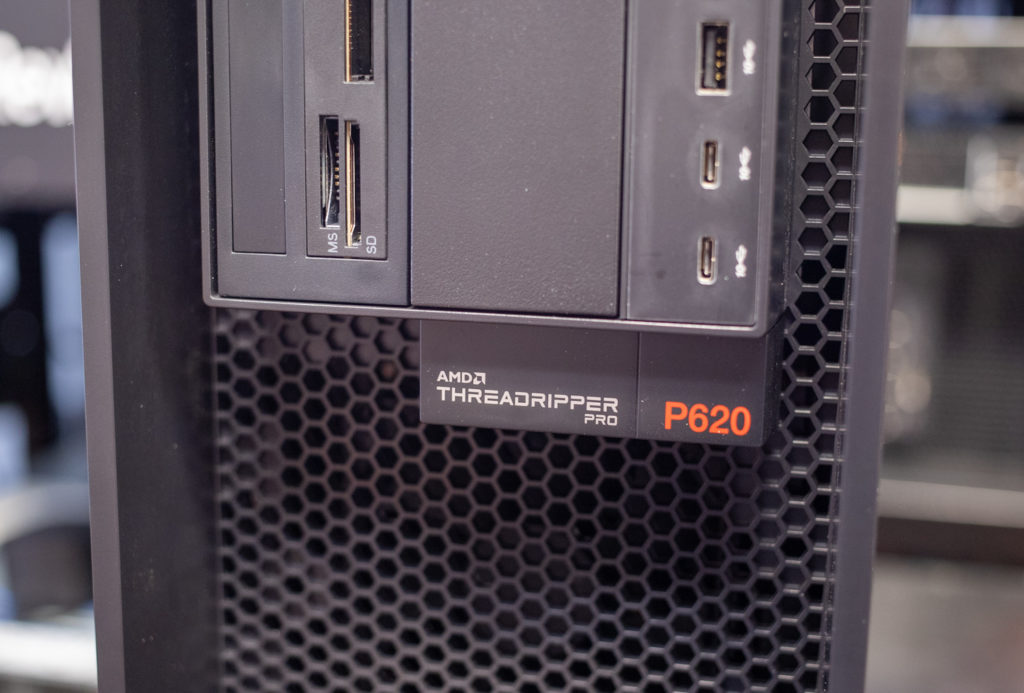 If you’re looking to compare the P620 to other similar systems, options are limited. The only other mainstream Threadripper Pro system is the Supermicro SuperWorkstation 5014A-TT. This is a 64-core, 3995WX-based system that supports up to 2TB of ECC DDR4-3200 RAM, 6x PCIe Gen4 expansion slots, 2000-watt PS/2 multi-output, and up to four double-wide GPUs. 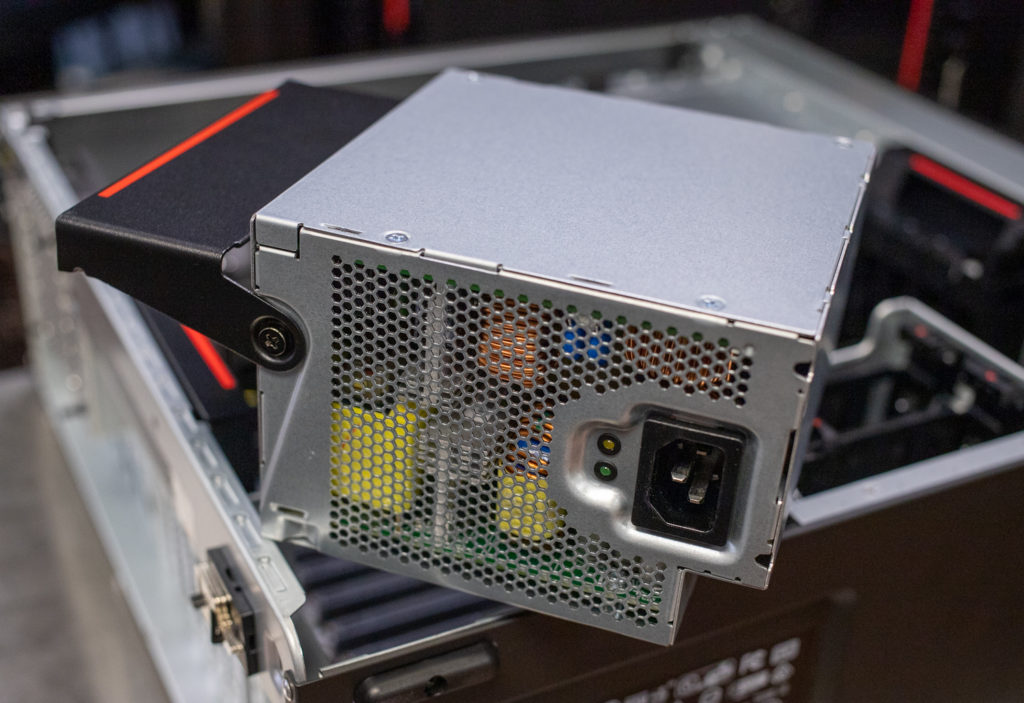 The updated P620 is a full tower workstation, though at 6.5 x 18.1 x 17.6 inches (HWD), it comes in a little more compact than others of this form factor (for example, the Supermicro SuperWorkstation 5014A-TT measures 21.06 x 8.74 x 22.56 inches). Nonetheless, the P620 features the usual dark grey, black (with red highlights) design, with front real estate mainly taken up by ventilation. 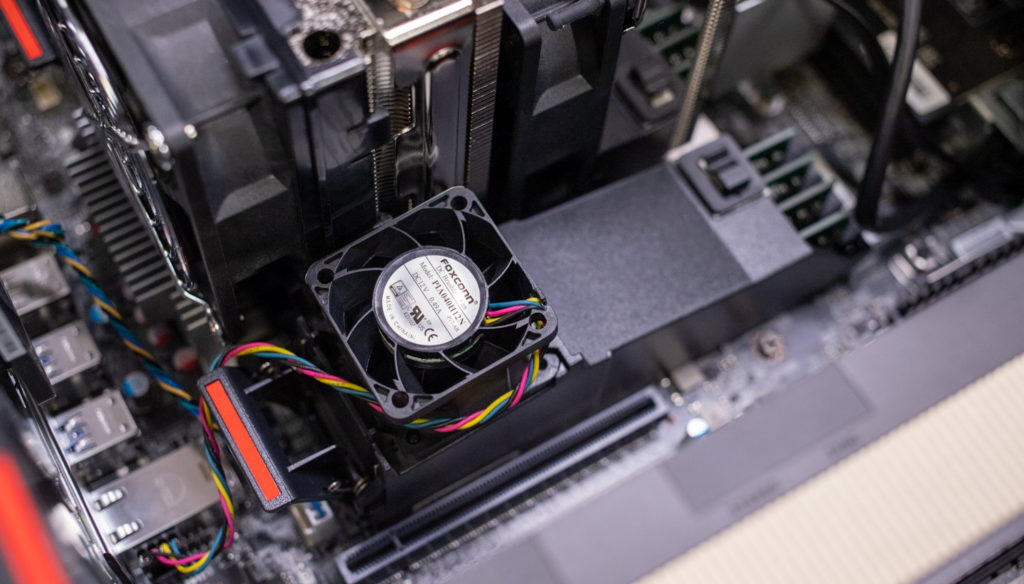 Turning the workstation around to the back panel reveals dual legacy USB 2.0 ports, 4x USB-A 3.2 Gen 2 ports, two PS/2 ports (for legacy keyboard/mouse), one 10GbE RJ-45 Ethernet port, and line-in/line-out/microphone (3.5mm) ports. The rest of the rear panel is taken up by the fans, PCIe expansion slots and the PSU. 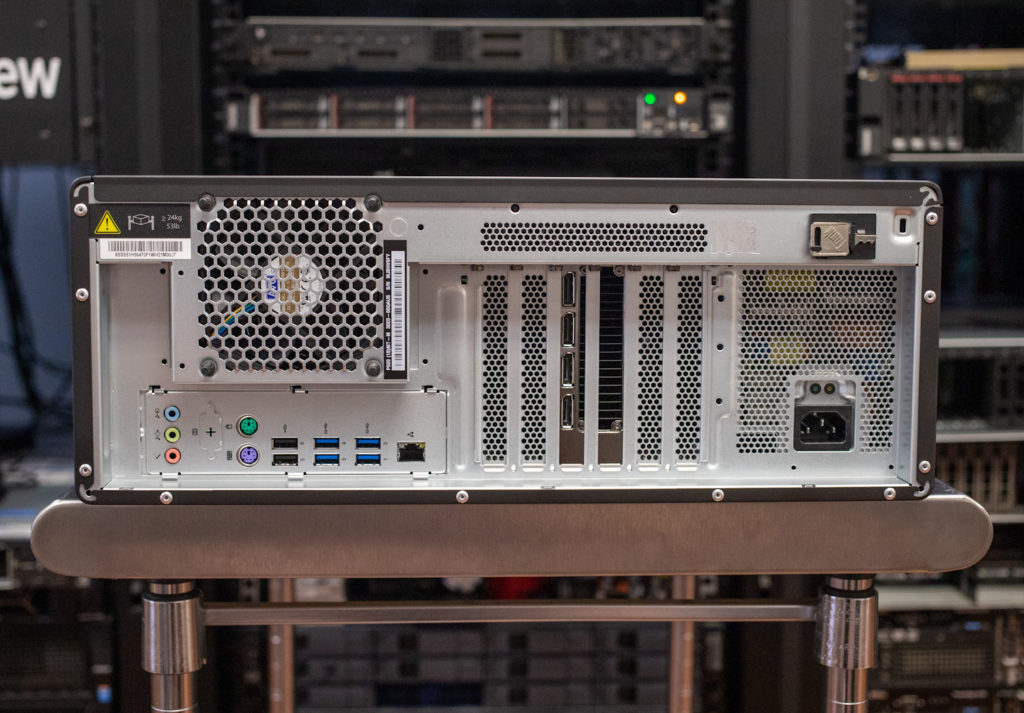 Taking off the side cover was simple (just use the tab and pull down). Once removed, you can see all the core components and easily access them.

The P620 features a thermal design highlighted by its removable fans located inside the chassis. Lenovo and AMD partnered to create a custom-designed heat sink, which will help users get the best possible (consistent) performance out of their workstations during heavy workloads. 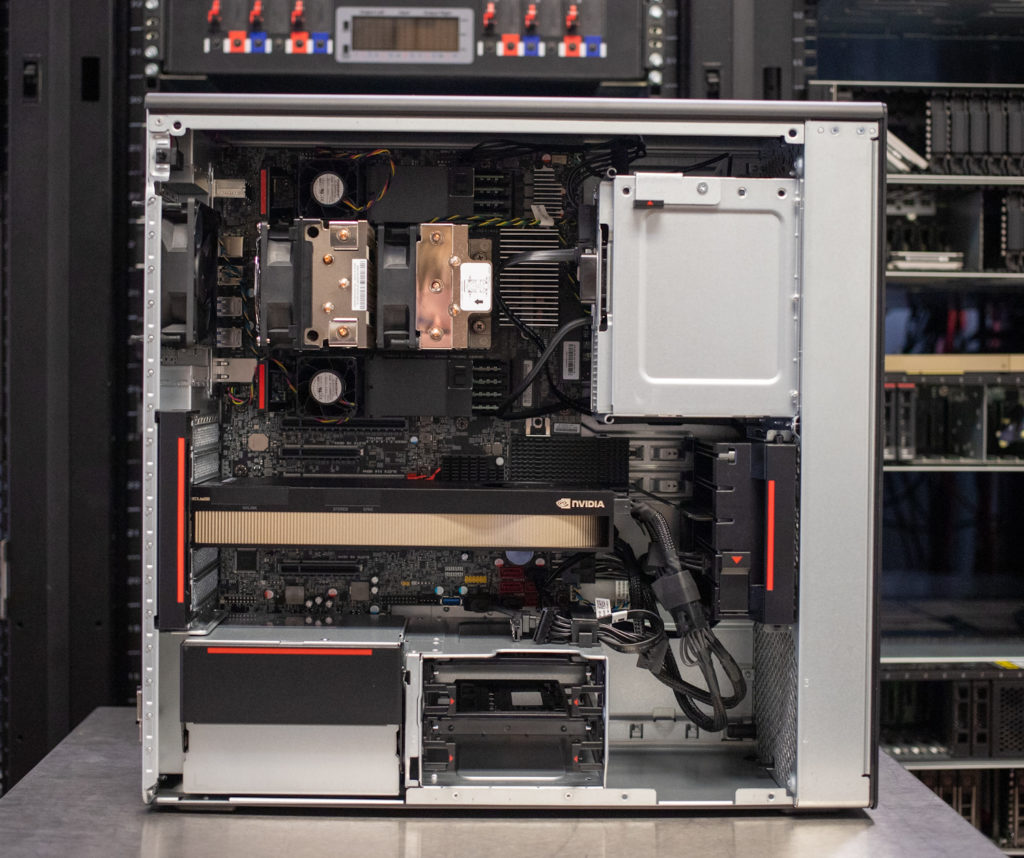 Here, you will see the dual onboard M.2 PCIe connectors. More Gen 4 M.2 NVMe drives can be added via PCIe Gen4 adaptors. 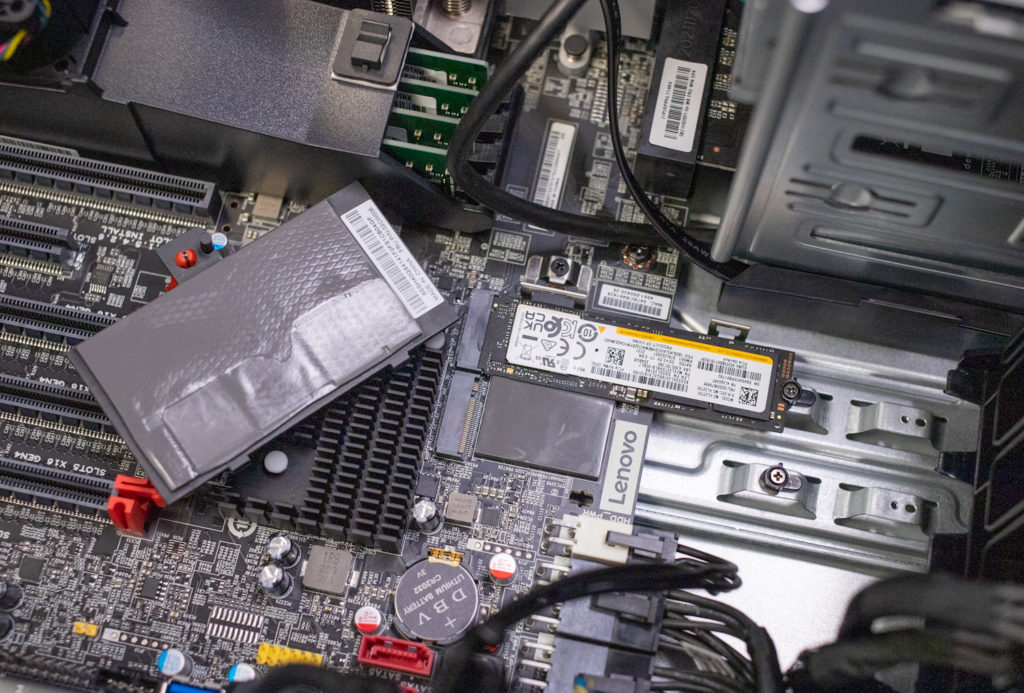 Like all models from Lenovo’s P-series workstations, the P620 features a completely modular design that is highlighted by red “touchpoints” that indicate where a user should place their hand to easily remove and add components. This is a great feature from Lenovo, making upgrading and removing components a seamless process. These red touchpoints also mean that the specific component does not need any tools for it to be removed. The only components that actually do need a screwdriver are the CPU heat sinks.

Not only that, the P620 leverages a handle design, which makes each component slide out easily when you need to replace anything. It also uses a tray design that allows two different drives in a single tray.

This is a higher-end configuration with the fastest available CPU and GPU for this workstation, while the workstation is outfitted with a maximum of 1TB. This ThinkStation P620 is also fairly easy to upgrade as your needs grow.

We will be comparing the updated ThinkStation P620 to the following systems:

We will also be comparing to our Intel Core i9-12900K (Alder Lake) test rig in some of our tests:

SPECviewperf 2020 is the worldwide standard for measuring graphics performance of professional applications under the OpenGL and Direct X application programming interfaces. The viewsets (or benchmarks) represent graphics content and behavior from actual applications, without having to install the applications themselves. The newest version of this benchmark went through major updates late last year, including new viewsets taken from traces of the latest versions of 3ds Max, Catia, Maya, and Solidworks applications. In addition, they added support within all viewsets for both 2K and 4K resolution displays. Our tests were run with a windowed resolution of 3800×2120.

Here, the Lenovo workstation performed better than both its predecessor and the Supermicro tower (though not by too much) while falling slightly behind the Intel 12900L test rig in Crea and Energy areas. This indicates the updated components helped further optimize the A6000 GPU; however, performance was pretty similar across the board.

Next up is Blender, an open-source 3D modeling application. This benchmark was run using the Blender Benchmark utility. The score is samples per minute, with higher being better.

Here, we are just comparing it to the Intel i9-12900K Test Rig, since we only recently switched to the new Blender 3.0.1 version. Though P620 edged out the Intel rig in classroom and fell just behind in monster and junkshop, the scores are very similar between the two systems.

Another 3D benchmark we will be looking at is LuxMark, an OpenCL GPU benchmarking utility. The ThinkStation P620 (both current and last gen), Supermicro, and Intel systems all performed well thanks to the Nvidia RTX A6000 graphics cards. That said, the Intel Test Rig edged out the rest of the pack in both hallbench and food categories.

Our models consist of Montreal, Philly, and Portland. Here, the new Lenovo P620 showed top performance in some of categories; however, the test SR Intel Test Rig showed the best overall performance particularly with the Portland animation model test.

Up next is the Philly model:

Last, we look OctaneBench, a benchmarking utility for OctaneRender, which is another 3D renderer with RTX support that is similar to V-Ray. Here, both the updated and older Lenovo P620 were much better than the Supermicro (the older model actually had slightly higher scores than the new); however, the Intel Test Rig proved to be the best overall.  SuperMicro’s poor performance here seems to be an anomaly, as it has been competitive throughout our other tests.

The refreshed Lenovo ThinkStation P620 is a tower form factor workstation that has been updated with the most recent ThreadRipper Pro CPUs, including the powerful 5995WX. These new CPU options feature end-to-end design enhancements, energy efficiency, and reduced latencies over the previous generation. This makes the updated P620 even more of a powerhouse workstation than it already was when equipped with the 5995WX. 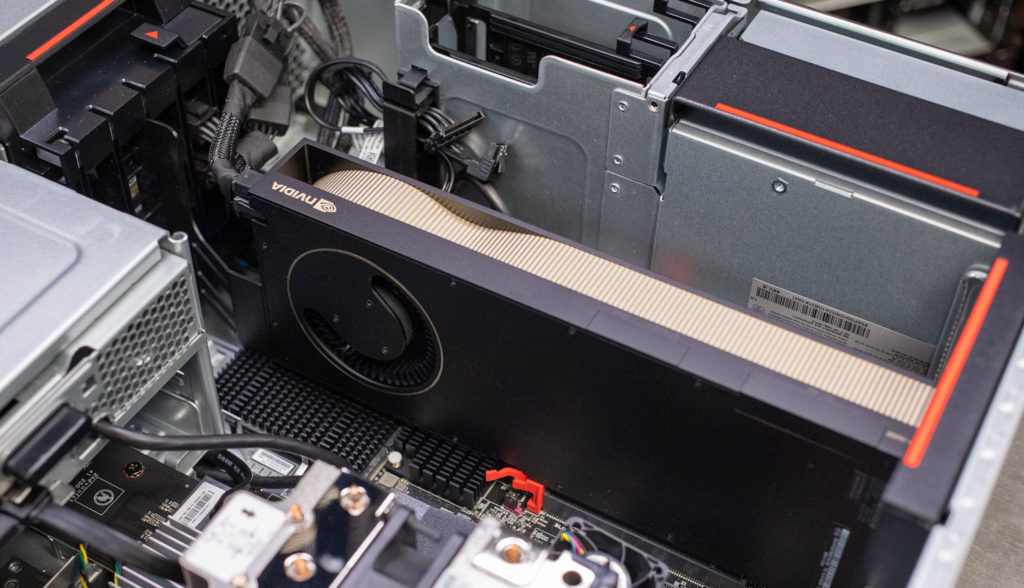 With a 64-core count from the AMD Ryzen Threadripper PRO 5000 WX-Series desktop processors, the P620 is a little more server than desktop, despite the packaging. It can hit up to 4.5GHz, has 128 lanes of PCIe 4.0 bandwidth and supports up to a 1TB of DDR4 3200MHz memory via its 8 DIMM slots. Users can also outfit this system with up to two top-class, high-end GPUs (NVIDIA RTX A6000) or up to four more midrange workstation GPUs. Users can populate the power-driven workstation with a ton of flash and/or high-capacity spinning media.

So, is this new ThinkStation P620 worth the upgrade? Our performance results certainly show a noticeable improvement over the older-gen models, making this a must-have for power-hungry users. In addition, those who have a previous version of the P620 and want to upgrade to the new processors can swap out their existing CPU for the new one and run a BIOS update. Overall, this is an extremely powerful, easily upgradable workstation that offers power users everything they need.