Next up in our DDR5 memory review series is Team Group’s T-Force Delta TUF RGB DDR5 kit. This high-performance memory operates at higher frequencies than the DDR5 standard, 5200MHz versus 4800MHz, includes RGB-lit heat spreaders, and a lifetime warranty.

Next up in our DDR5 memory review series is Team Group’s T-Force Delta TUF RGB DDR5 kit. This high-performance memory operates at higher frequencies than the DDR5 standard, 5200MHz versus 4800MHz, includes RGB-lit heat spreaders, and a lifetime warranty. 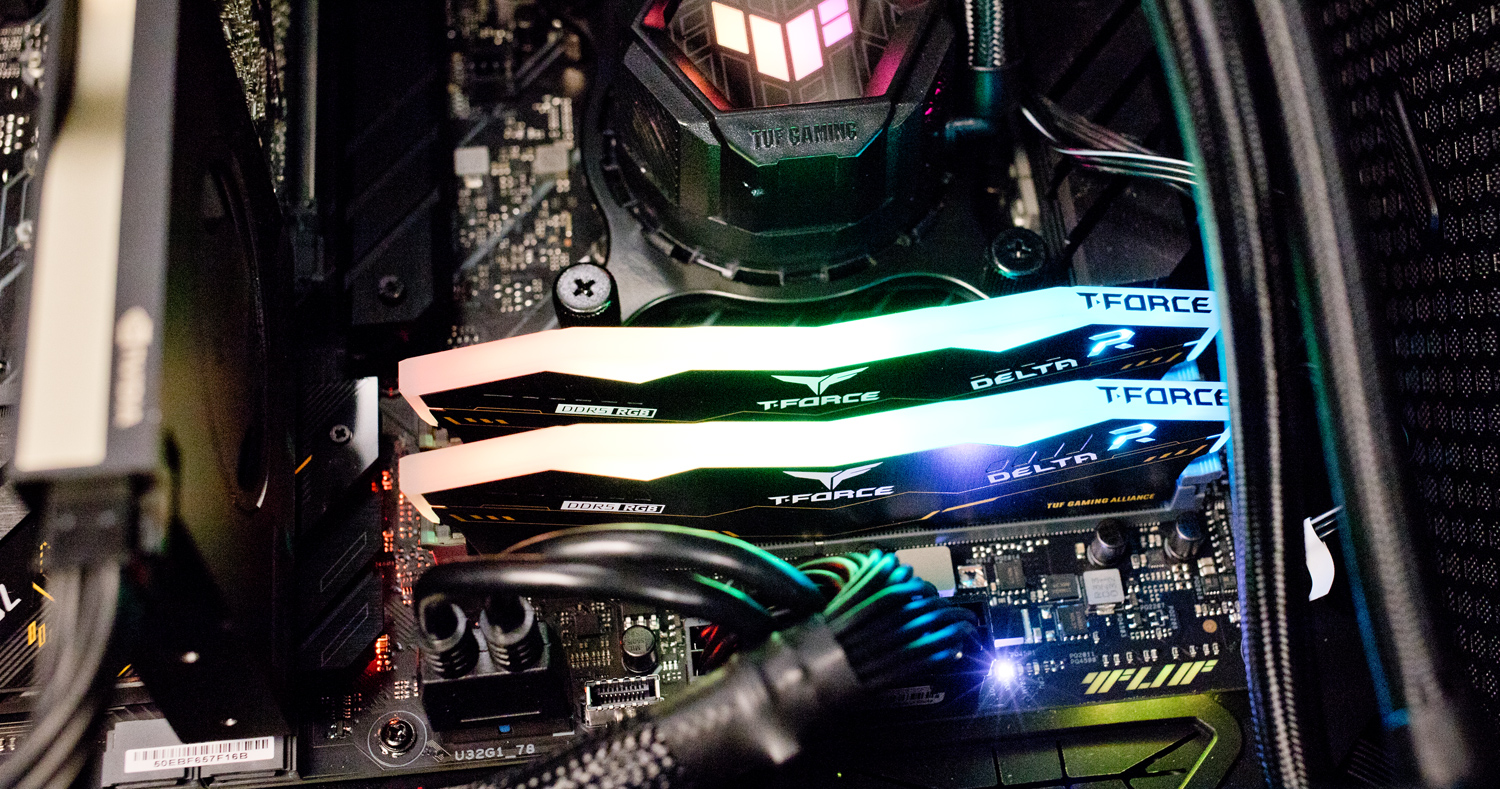 Late 2021 saw the introduction of the new DDR5 memory standard, the replacement for the venerable DDR4 standard that has been around since 2014. DDR5 promises higher bandwidth and lower power consumption, though it’s expensive since it’s not being produced in huge quantities just yet. Expect to spend about twice as much as DDR4 for the same capacity.

The DIMMs themselves look particularly aggressive. The black heatspreaders have a jagged RGB-infused edge on top. You can control the lighting effects through the RGB software included with your motherboard. If you have a low-hanging CPU cooler, make sure it will clear these 46.1mm tall DIMMs.

Installing DDR5 is no different than installing DDR4, DDR3, or even earlier DDR. DDR5 DIMMs are 288-pin just like DDR4 but won’t fit in the same slots because the notch position is different.

The full specifications of this Team Group memory are as follows. (See this memory on Team Group’s site.)

We use our self-built StorageReview desktop to test DDR5 memory. It has the following specifications:

The T-Force Delta TUF RGB DDR5-5200 memory kit as reviewed here is two 16GB modules (32GB total). Our benchmarks were done at its rated DDR5-5200 speed both with and without its XMP II profile engaged. The XMP II profile settings happened to be the same at our motherboard’s default settings; its timings in either event are DDR5-5200 CL40-40-40-61.

The other kits we are using for comparison include:

These kits aren’t all the same size or capacity, so some of the comparisons will be inexact. Nonetheless, we’ll see be able to see if the Team Group memory shows advantages over the other DDR5-5200 kits, and if DDR5-5200 makes a difference over the slower Corsair DDR5-4400 kit.

Already we can see that the Team Group memory doesn’t have as low of timings as the others in XMP II, though it remains to be seen if that’s going to adversely affect its performance.

Our first test is the popular SiSoftware Sandra 2021. Higher numbers are better in all subtests. The DDR5-5200 tests are first, both with and without XMP II profiles engaged. The Corsair kit will sit this out since it can’t operate above DDR5-4400.

All the kits were close, and if anything, the Team Group kit trailed slightly in bandwidth, peaking at 62.352GB/s versus the XPG’s 62.945GB/s, both with XMP II engaged. Interestingly, the Team Group’s latency was slightly lower without XMP II engaged (32.9ns versus 33.4ns), though this could have been just a testing discrepancy.

The differences are now pronounced; the Team Group kit shows significant bandwidth advantages over the slower frequency kits to the tune of nearly 15% against the Corsair at DDR5-4400. Its extra frequency also more than makes up for its slower timings.

The excellent 7-Zip file archive tool has a handy built-in compression benchmark. We ran 10 passes using a 128MB dictionary size and all 24 CPU threads of our Core i9-12900K; higher numbers are better.

The differences seem insignificant based on the total ratings, so we focus on the compression sub-scores. There, the Team Group kit topped out at a resulting rating of 98.369 GIPS, matching the Kingston kit (98.664 GIPS) but not quite matching the XPG kit (99.257 GIPS).

Team Group T-Force Delta TUF RGB DDR5 performed about as well as Kingston Fury Beast, though it wasn’t the fastest DDR5-5200 kit we’ve tested; that honor goes to XPG Lancer RGB. The performance differences between those kits are minimal in the grand picture and we don’t advocate spending significantly more for one kit versus another for that reason. 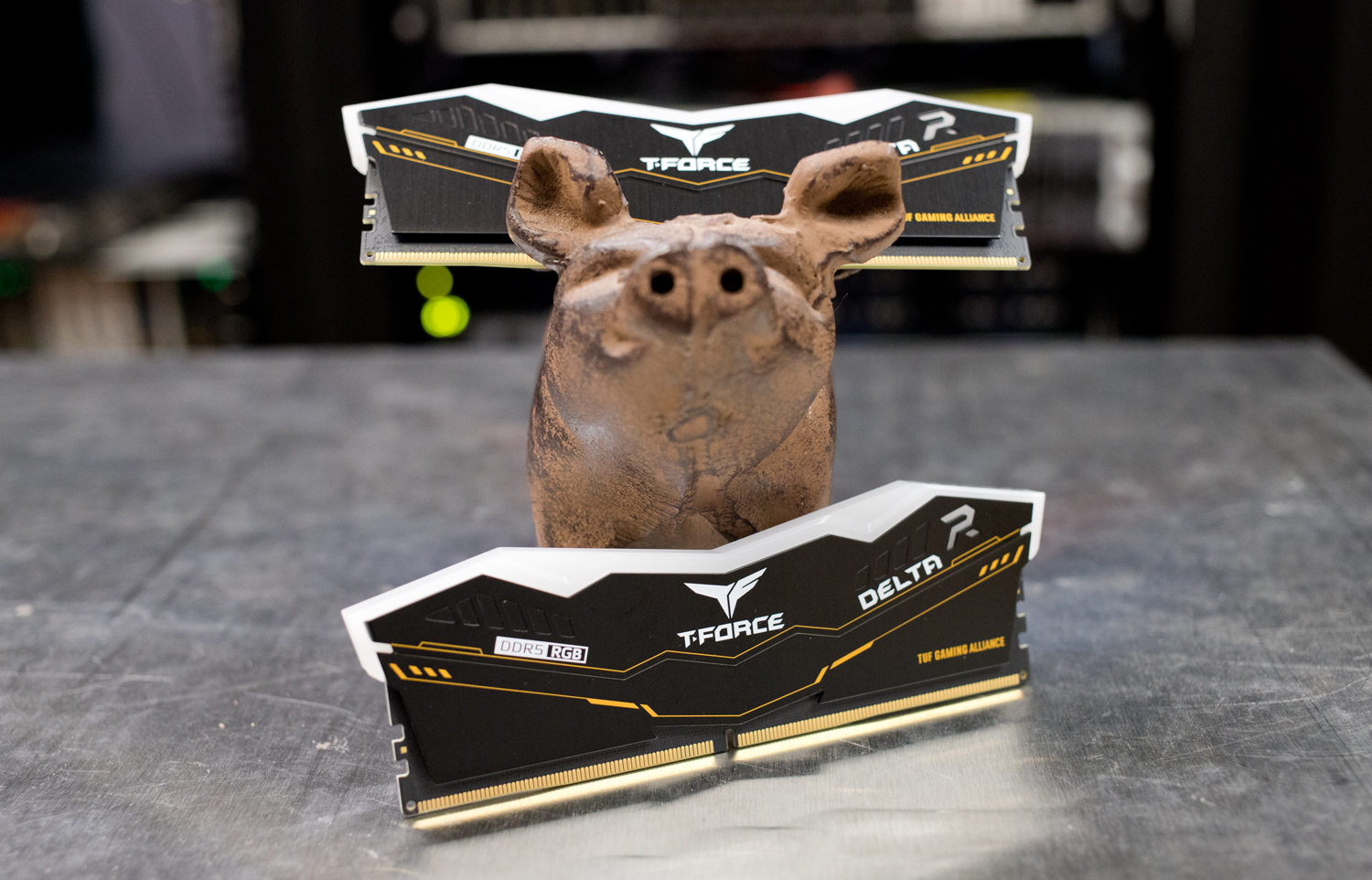 That said, there are lots to like about Team Group’s entry – its flashy RGB-lit heat spreaders, XMP II profiles for easy overclocking (as DDR5-5200 is an overclock versus DDR5-4800), and lifetime warranty. Its price is too high next to XPG Lancer RGB, and Kingston Fury Beast is even less expensive if you’re willing to forego RGB lighting. But DDR5 pricing is fluid, when Team Group’s price drops to slightly below XPG’s levels, it’ll be an excellent alternative.