The XPG GAMMIX S50 Lite is the newest consumer-grade PCIe Gen4x4 drive to hit the market. Though XPG claims that their new drive is catered to the gamer and PC enthusiast demographic, this drive is certainly more of an entry-level, budget PCIe solution. This M.2 2280 form factor SSD features 3D NAND, SLC Caching and DRAM cache buffer, and comes in capacities of 1TB and 2TB.

The XPG GAMMIX S50 Lite is the newest consumer-grade PCIe Gen4x4 drive to hit the market. Though XPG claims that their new drive is catered to the gamer and PC enthusiast demographic, this drive is certainly more of an entry-level, budget PCIe solution. This M.2 2280 form factor SSD features 3D NAND, SLC Caching and DRAM cache buffer, and comes in capacities of 1TB and 2TB. 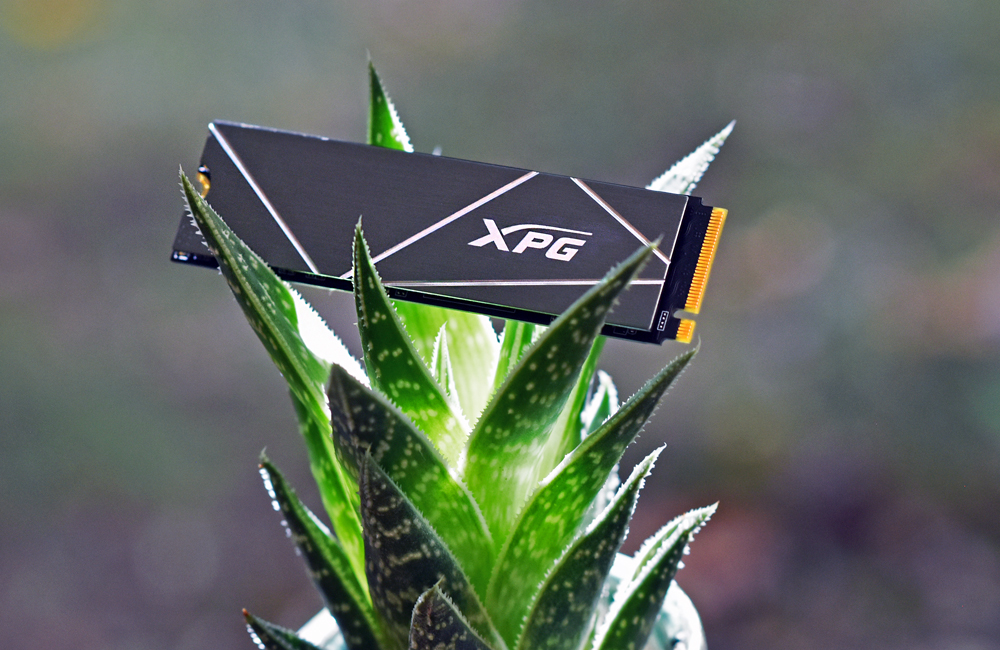 We’ve seen a few PCIe Gen4 hit the market over the past few months, and although they offered sometimes bar-setting performance, they still couldn’t quite reach their true potential due to current compatibility of hardware. XPG, however, is a much more realistic in the quoted performance specifications compared to drives like the new Samsung 980 PRO PCIe 4.0 NVMe SSD, which claimed read speeds up to 6.9GB/s. XPG indicates potential sequential read and writes up to 3.9GB/s and 3.2GB/s, respectively, while random 4KB speeds are expected to hit up to 490,000 IOPS read and 540,000 IOPS write under the right environment. 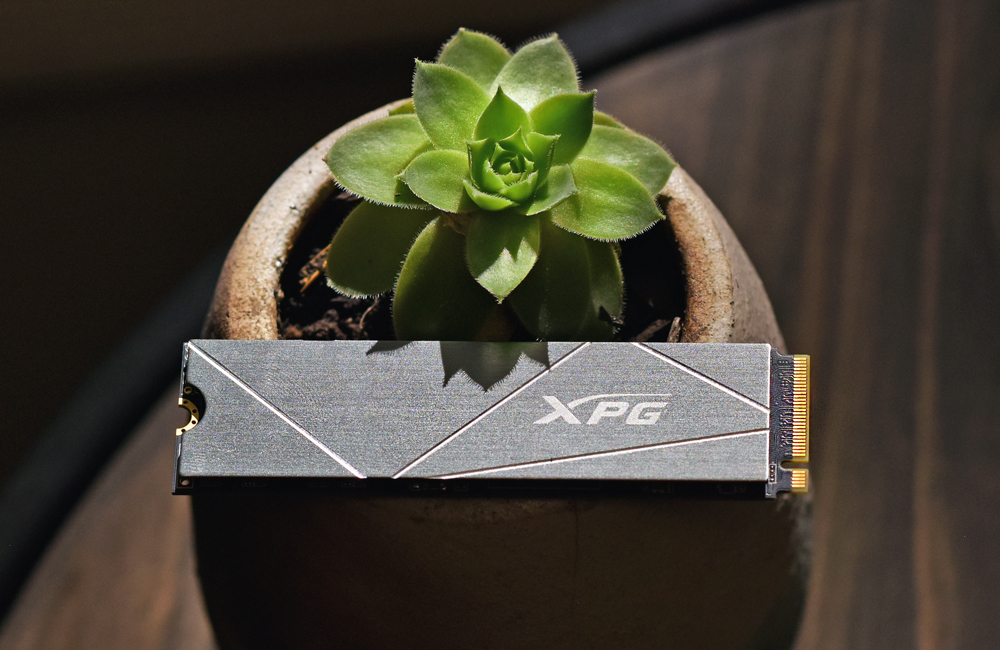 Front and center of the XPG drive high-temperature resistant aluminum heat sink that completely covers the PCB (minus a few millimeters on the sides), allowing it to dissipate the drive’s heat under high workloads. 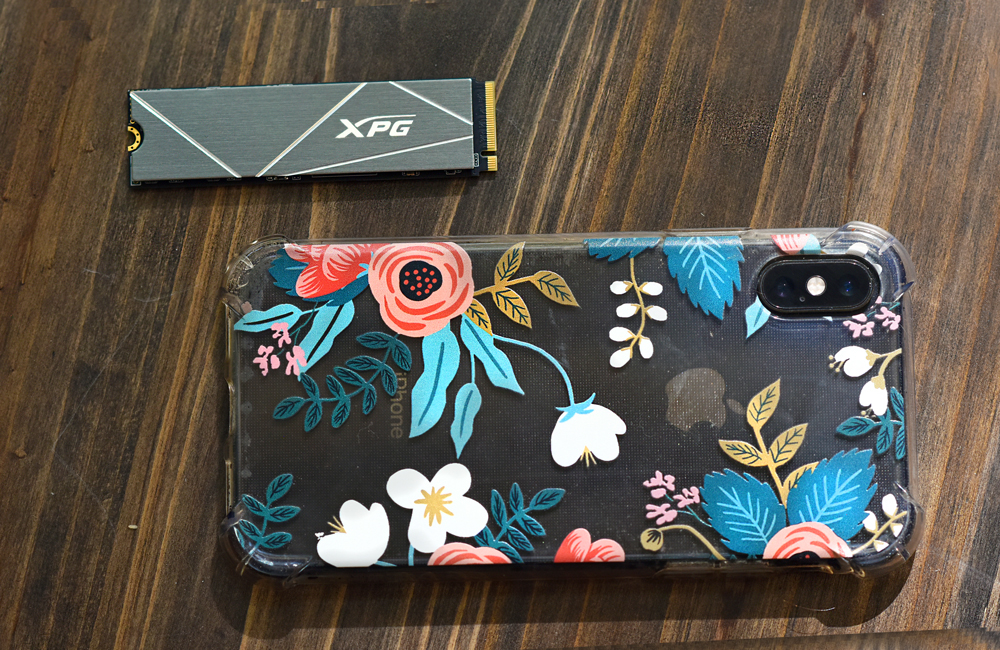 Flipping the GAMMIX S50 Lite over reveals the sticker we usually find on M.2 drives, displaying information such as the product name, serial numbers, and certifications. 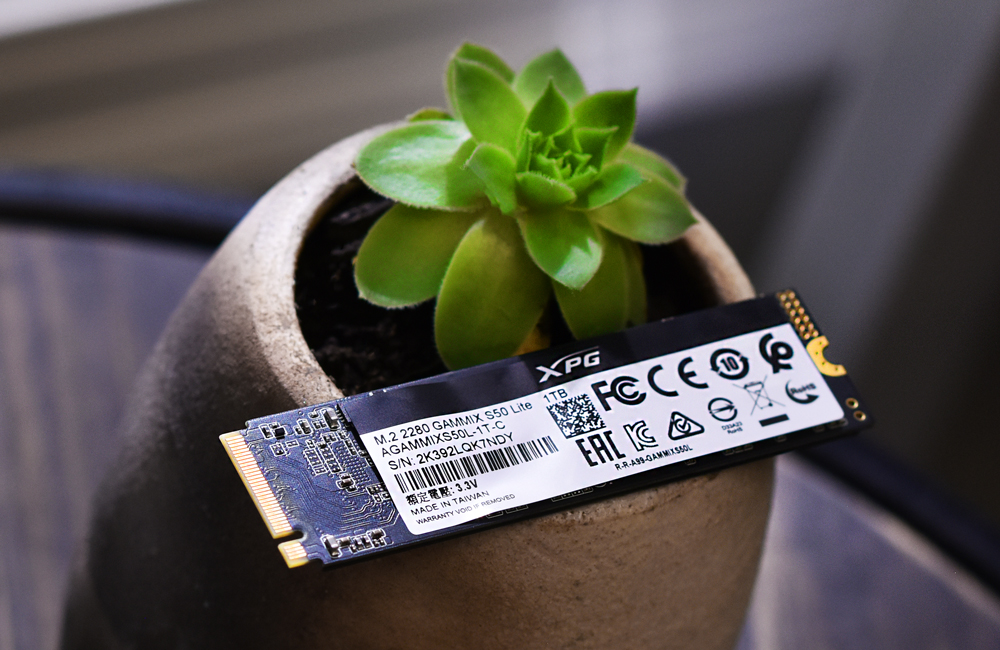 As we migrate into testing newer NVME Gen4 SSDs, we made a platform shift in our lab to support the newer interface. Lenovo has been out in the front of the pack with PCIe Gen4 support, including up to the front-mount U.2 bays, while others still only offer edge-card support. In our Gen4 reviews, we leverage the Lenovo ThinkSystem SR635 server, equipped with an AMD 7742 CPU and 512GB of 3200Mhz DDR4 memory.  NVMe is tested natively through an M.2 to PCIe adapter card in the edge-card slot, while U.2 drives are loaded in the front. The methodology used better reflects the end-user workflow with the consistency, scalability, and flexibility testing within virtualized server offers. A large focus is put on drive latency across the entire load range of the drive, not just at the smallest QD1 (Queue-Depth 1) levels. We do this because many of the common consumer benchmarks don’t adequately capture end-user workload profiles.

When it comes to benchmarking storage devices, application testing is best, and synthetic testing comes in second place. While not a perfect representation of actual workloads, synthetic tests do help to baseline storage devices with a repeatability factor that makes it easy to do apples-to-apples comparison between competing solutions. These workloads offer a range of different testing profiles ranging from “four corners” tests, common database transfer size tests, to trace captures from different VDI environments. All of these tests leverage the common vdBench workload generator, with a scripting engine to automate and capture results over a large compute testing cluster. This allows us to repeat the same workloads across a wide range of storage devices, including flash arrays and individual storage devices. Our testing process for these benchmarks fills the entire drive surface with data, then partitions a drive section equal to 5% of the drive capacity to simulate how the drive might respond to application workloads. This is different from full entropy tests which use 100% of the drive and take them into a steady state. As a result, these figures will reflect higher-sustained write speeds.

For 4K random write, the XPG drive showed unstable results from the get-go, with a peak of just 88,598 IOPS and latency of 1,439ms.

Switching over the sequential performance, the XPG GAMMIX S50 Lite showed performance well back from the rest of the leader board again with 29,585 IOPS (or 1.8GB/s) at a latency of 1,080ms.

For writes, the XPG drive continued its poor performance, peaking at 4,519 IOPS (287MB/s) and 2,636ms. The middle of the pack drives quadrupled the performance of the XPG drive while the Samsung Pro boasted over 27K IOPS (or 1.7GB/s).

Next, we looked at our VDI benchmarks, which are designed to tax the drives even further. These tests include Boot, Initial Login, and Monday Login. Looking at the Boot test, the XPG had a peak of 59,454 IOPS at a latency of 561µs before dropping off at the end.

VDI Initial Login saw the XPG drive with a peak of 21,401 IOPS at 13,984µs before another hit in performance at the end. 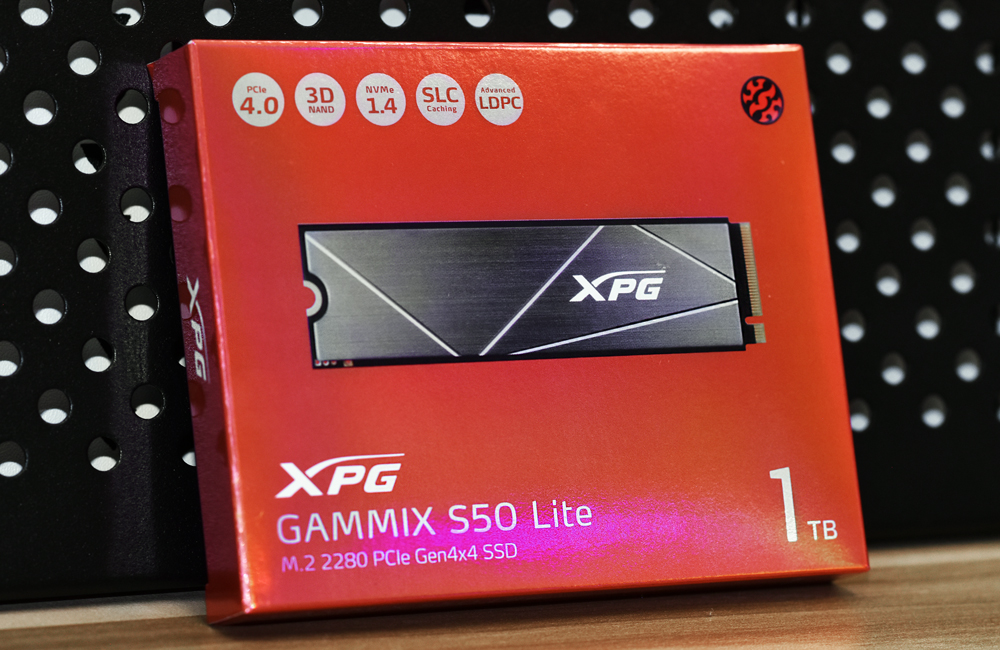 The company claims max speeds of up to 3.9GB/s read and 3.2GB/s write with throughput over 490K IOPS when using compatible motherboard. Unfortunately, it failed to reach anywhere near these claimed numbers under moderate workloads, as it measured less than half the performance of the other tested PCIe Gen4 drives (and sometimes falling back significantly more). As such, highlights from the charts above include: 222,173 IOPS in 4K read, 88,598 IOPS in 4K write, 1.8GB/s in 64K read, and 287MB/s in 64K write. In our VDI Clone, we saw 59,454 IOPS in boot, 21,401 IOPS in initial login, and 16,506 IOPS in Monday login.

Ultimately, it’s important to understand that PCIe 4.0 doesn’t automatically mean ultra-fast performance. Like any other drive technology, there will be both budget- and premium-performing releases. The new XPG drive certainly falls in the former, as it features a price point of $140 for the 1TB and $280 for the 2TB, which is noticeably less than the current few, PCIe 4.0 drives on the market. However, this inexpensive price tag certainly comes at the expense of speed, and its performance is actually more in line with drives like the Crucial P2 NVMe SSD, one of the slower TLC-based PCIe 3.0 consumer SSDs on the market. It’s useful to keep this in mind when you’re looking to upgrade your rig with a PCIe 4.0 drive.