The Synology DiskStation DS1821+ is an 8-bay NAS solution designed for SMBs looking for an effective way to store and protect their data. Like others from the line, this 8-bay NAS solution features an AMD Ryzen CPU and two M.2 2280 slots for NVMe Cache, which helps to drive its solid performance. Businesses can also significantly increase the capacity of the DS1821+ using dual DX517 expansion devices, which ups the drive count to 18 for a maximum single volume size of 108TB.

The Synology DiskStation DS1821+ is an 8-bay NAS solution designed for SMBs looking for an effective way to store and protect their data. Like others from the line, this 8-bay NAS solution features an AMD Ryzen CPU and two M.2 2280 slots for NVMe Cache, which helps to drive its solid performance. Businesses can also significantly increase the capacity of the DS1821+ using dual DX517 expansion devices, which ups the drive count to 18 for a maximum single volume size of 108TB. 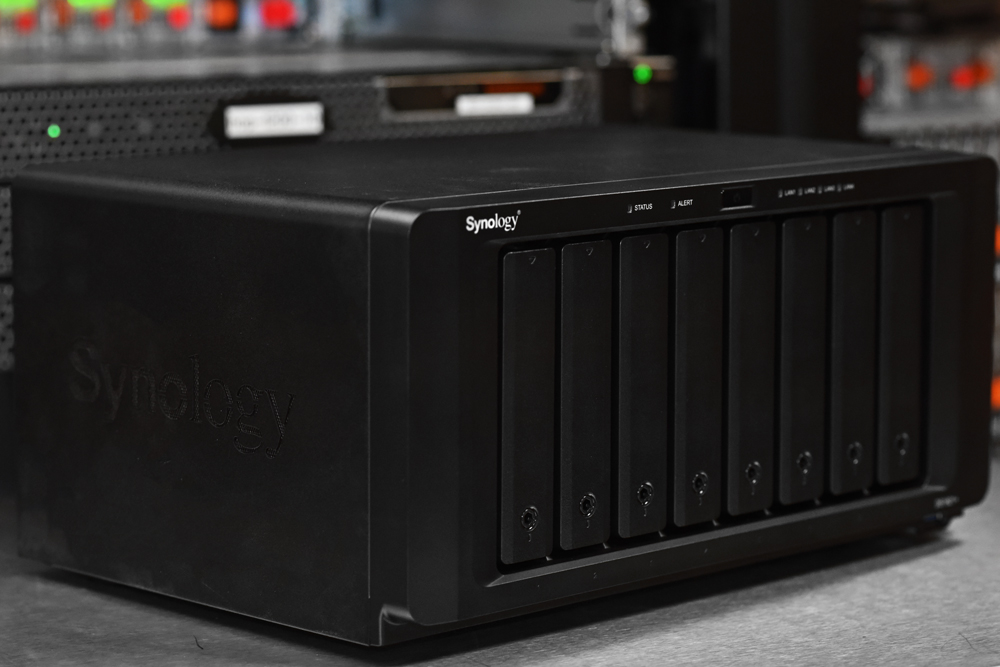 As far as performance goes, Synology quotes the DS1821+ around 2.3GB/s read and 1.15GB/s write in sequential speeds using (when using optional aggregated 10GbE connectivity), while random speeds are expected to reach up to 113,000 IOPS read and 54,000 IOPS write (when using 10GbE iSCSI). These numbers are pretty much on par with the DS1621+ model we reviewed last week. Nonetheless, the DS1821+ is able to reach these numbers due to its AMD Ryzen V1500B 4-core 2.2 GHz 64-bit (also inside the DS1621+), which features Hardware Encryption Engine (AES-NI). The above-mentioned performance will slow down a bit when leveraging this technology due to the encryption process. The DS1621+ also can be outfitted with up to 32GB DDR4 ECC SODIMM RAM, though it ships 4GB with the standard build.

The Synology DS1821+ is equipped with pretty much the exact same connectivity ports as the 6-bay model; that is, four RJ-45 1GbE LAN ports, two eSATA ports, and four USB 3.2 Gen 1 ports (one more than the DS1621+). Those who want to get the most out of the DS1821+ can utilize its PCIe Gen3 x8 slot (x4 link), which is used to add a 10GbE network adapter card or an additional M.2 NVMe drive slot to further improve performance. While the DS1621+ has a high-performing Intel-based version with the DS1621xs+, the DS1821+ is currently the only model in the line.

The DS1821+ is of course powered by DiskStation Manager (DSM), the company’s easy-to-use and comprehensive operating system that has set the bar in the NAS market for some time now. The web-based DSM software (currently in version 6.2) manages all aspects of Synology server solutions and offers home users, businesses, and enterprises a diverse range of apps (or packages) for virtually any need they might have.

For example, the Central Management System allows organizations to manage all their Synology NAS devices from a centralized console, while the Replication Service gives users the ability to replicate snapshots from the source to the destination. You can also turn your Synology NAS to a surveillance server with Surveillance Station, a comprehensive video monitoring package that offers a range of management tools to protect your business or home.

The Synology DiskStation DS1821+ looks exactly like the 6-bay model (and Synology’s tower line up in general) with the exception of slightly longer width and weight. It features the usual matte black chassis that nicely combines metal and plastic for a very slick look and feel. The NAS also sits securely wherever you put it due to its rubber pads on the bottom of the device. 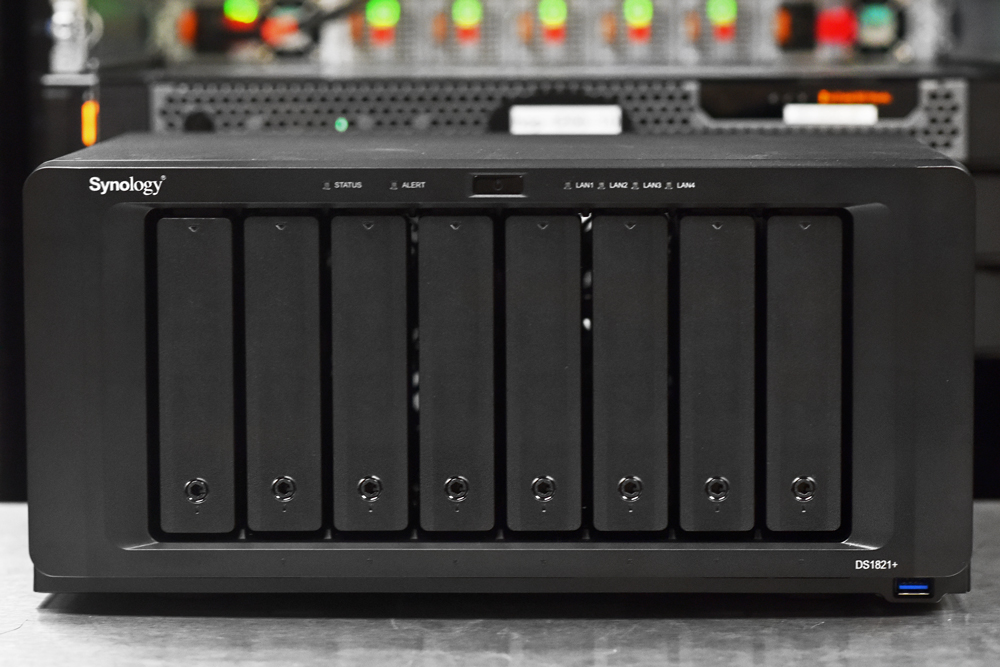 The front panel is where you access all of the eight 3.5” drives, which also feature a locking mechanism and a drive status indicator LED above each tray. Along the top (left to right) are the status and alert indicators, the power button, and the LAN indicator lights. One of the four USB 3.2 Gen 1 Ports is also located near the bottom right corner of the NAS. 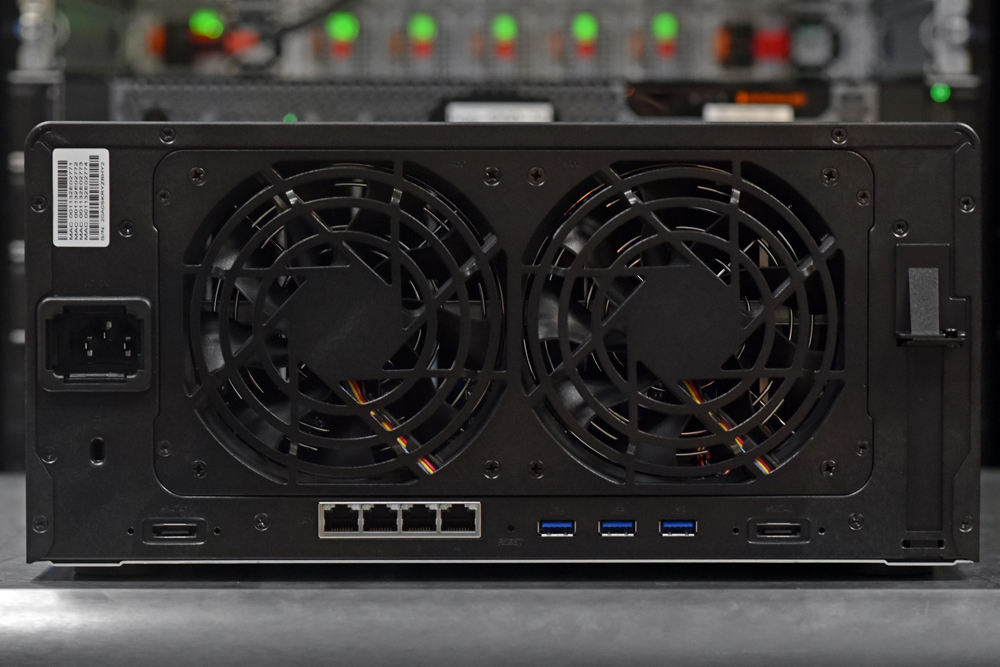 Turning the DS1821+, you will see the two 120 mm x 120 mm fans, which take up most of the real estate of the back panel. On each side of the fan is a power port to the left and the PCIe expansion slot to the right. Along the bottom are three remaining USB 3.2 Gen 1 ports, as well as the four RJ-45 1GbE LAN ports, a reset button, and two expansion ports. 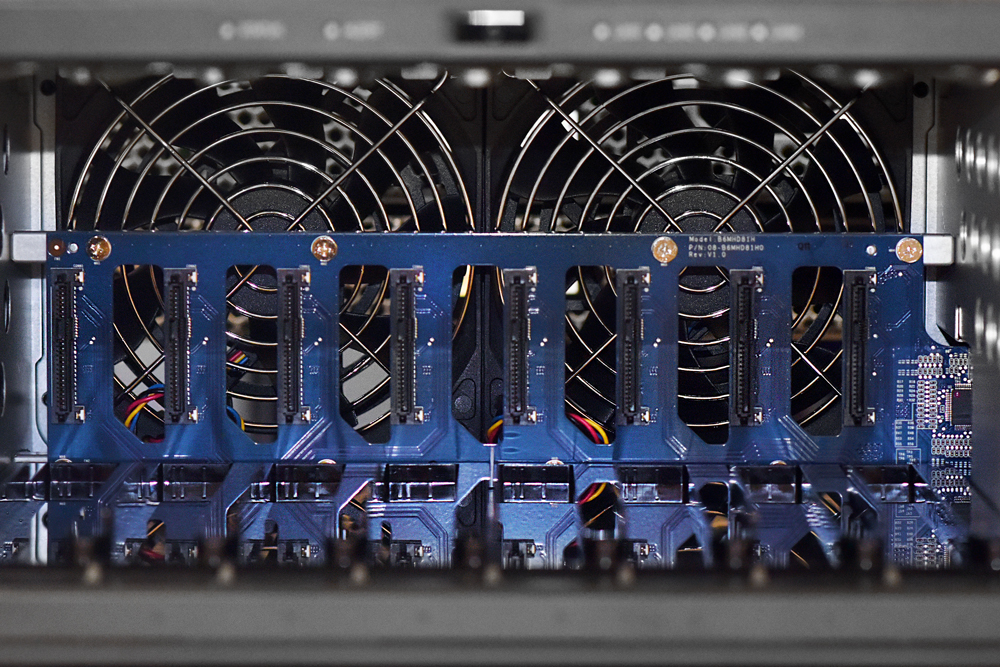 The M.2 cache is located inside the DS1821+ to the left of the furthest drive bay. 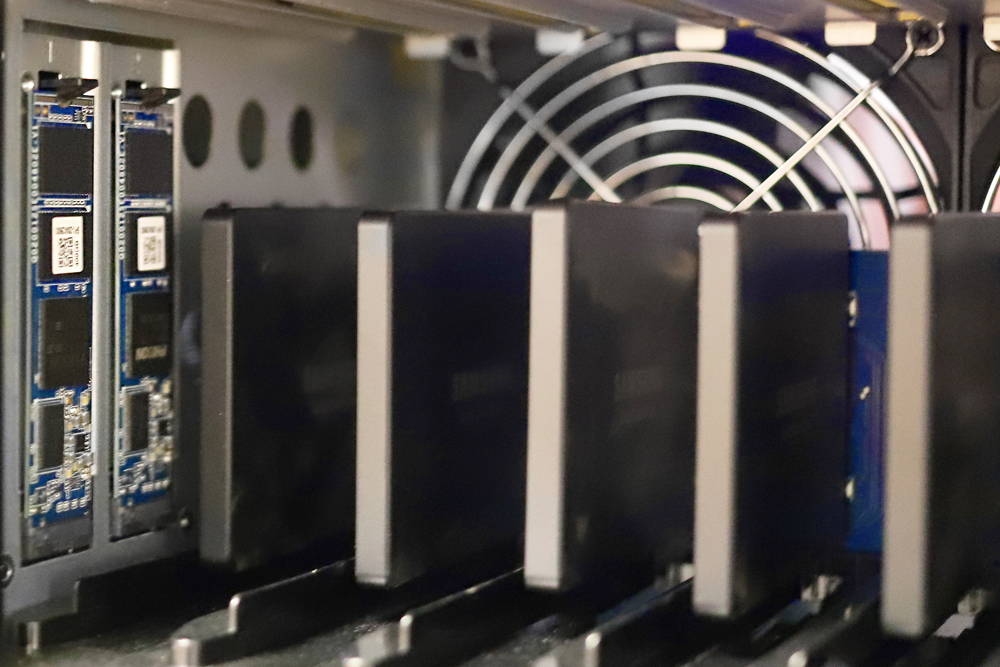 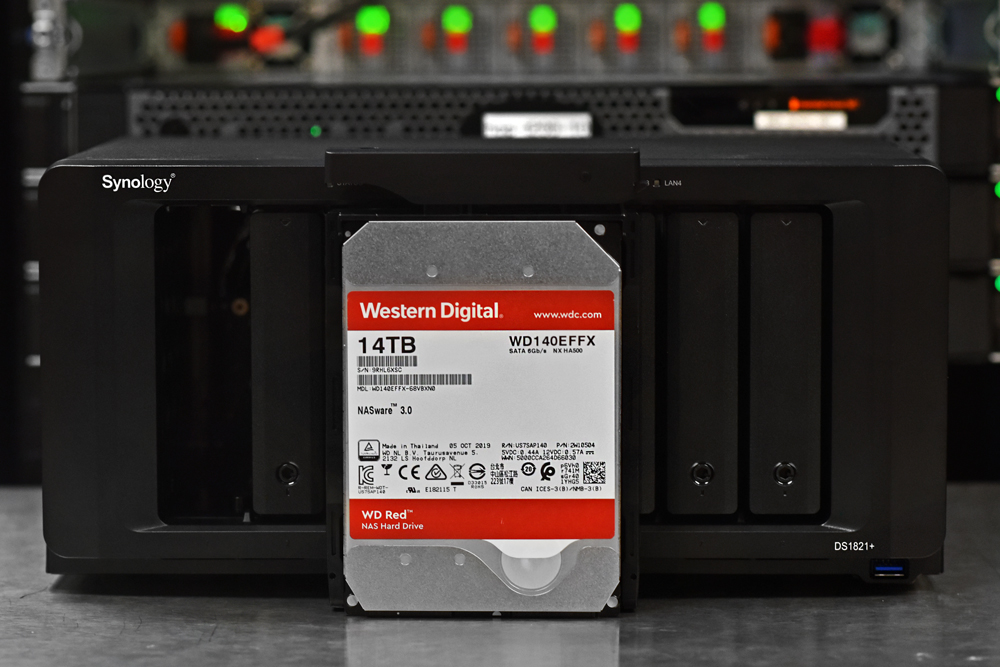 For our testing, we configured the Synology DiskStation DS1821+ in RAID6 in both iSCSI and SMB using both an HDD and SSD configuration using the following drives:

Compared to the fixed 16 thread, 16 queue max workload we performed in the 100% 4K write test, our mixed workload profiles scale the performance across a wide range of thread/queue combinations. In these tests, we span workload intensity from 2 thread/2 queue up to 16 thread/16 queue. With HDD throughput, SMB posted a range of 344 IOPS to 385 IOPS while iSCSI hit a range of 575 IOPS to 1,839 IOPS. Using SSDs, iSCSI was by far the best configuration with 8,813 IOPS at 2T/2Q and finishing off at 47,941 IOPS at 16T/16Q. 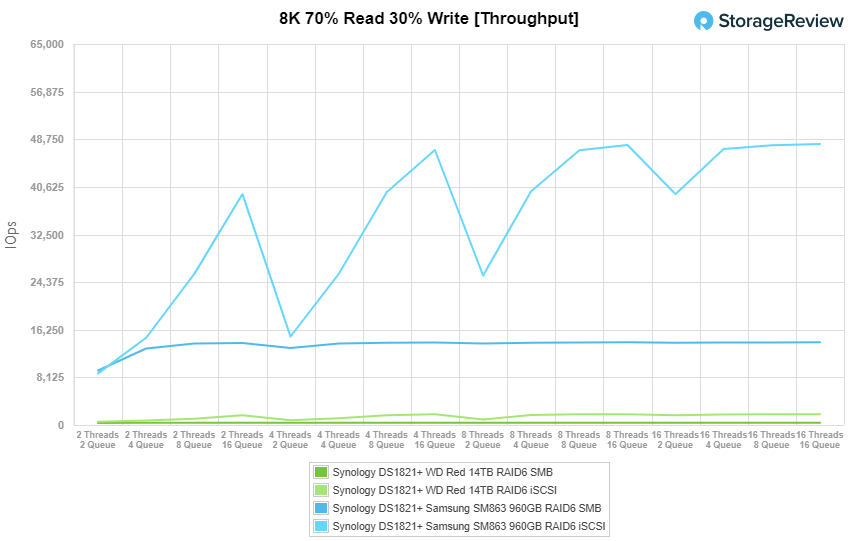 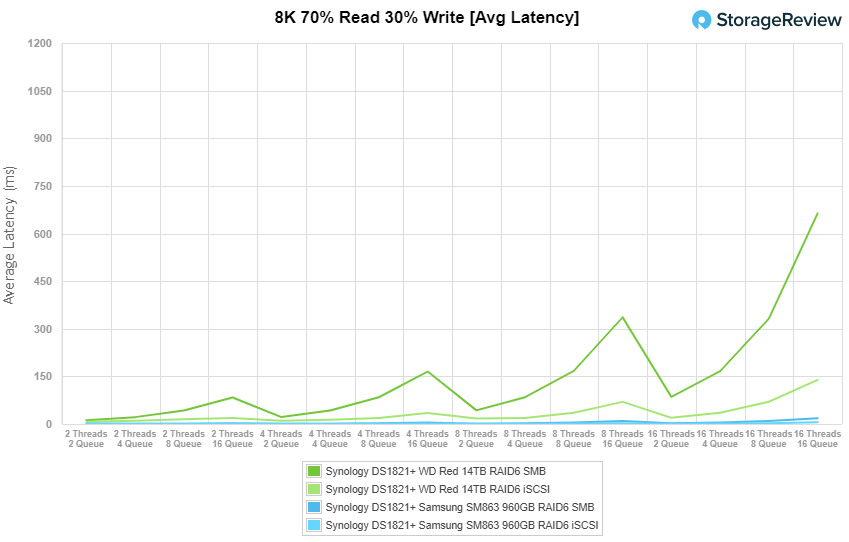 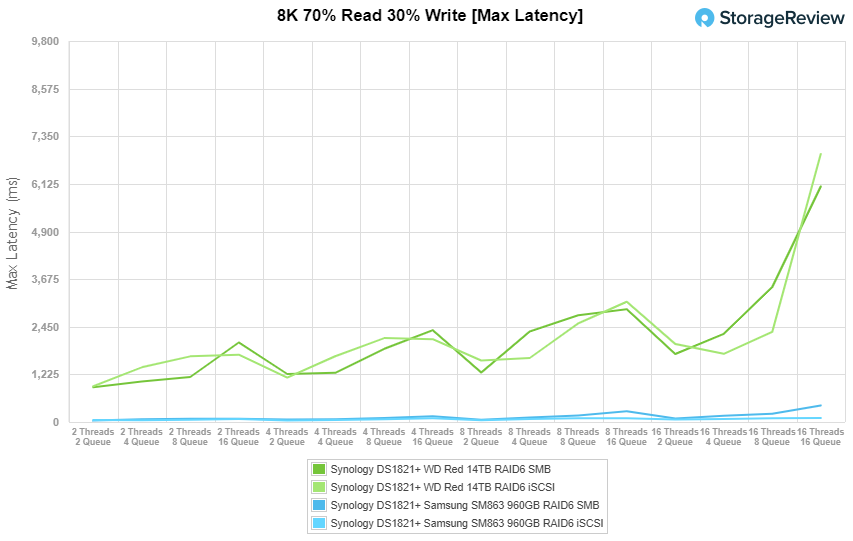 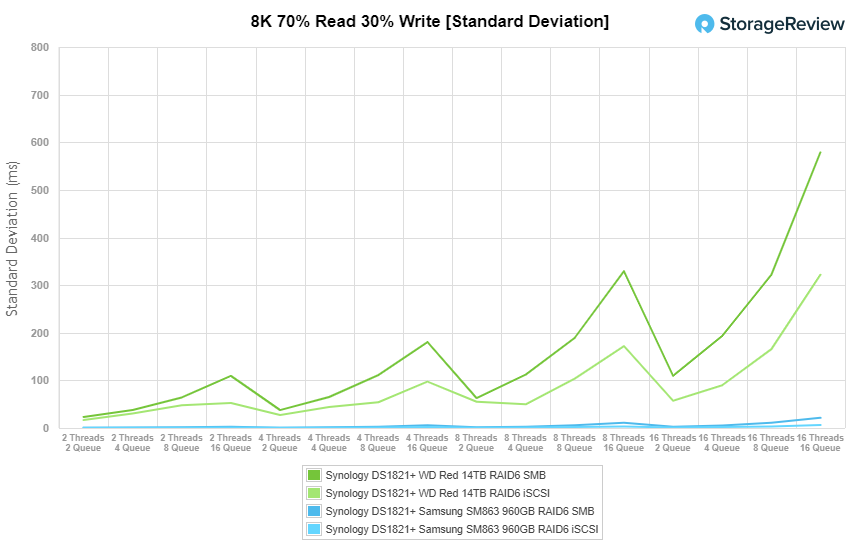 The Synology DiskStation DS1821+ is an 8-bay NAS that is powered by an AMD Ryzen CPU and is aimed at SMBs that need a little more performance and capacity in an easy-to-use NAS. Like most of the company’s modern NAS devices, the DS1821+ comes with two M.2 slots for NVMe SSD cache. The NAS has four 1GbE ports but has a PCIe slot that allows users to add a 10GbE. The DS1821+ can also be fitted with up to 32GB of DDR4 ECC SODIMM memory. All of the above can translate into a quoted speed of up to 2.3GB/s and up to 113K IOPS at the high end. This DiskStation features a Hardware Encryption Engine that adds security at the price of some of its performance. And the Synology DiskStation DS1821+ leverages Synology DSM for its operating system.

The Synology DiskStation DS1821+ packs good performance for SMBs, along with plenty of room for capacity with its eight bays. The ability to scale the capacity through expansion units and a PCIe slot to add faster networking (though we wish it had 10GbE onboard), makes the 1821+ another highly competent offering from Synology.