The TEAMGROUP T-CREATE CLASSIC is the company’s newest PCIe SSD to hit the market and is the Gen3 model of the line (there’s also a Gen4 version). Though this NVMe drive is certainly an entry-level consumer release, the company claims that the T-CREATE CLASSIC is designed specifically for the creative professionals whose daily tasks include the simultaneous use of multiple programs. Featuring 3D TLC flash, the DRAM-less T-CREATE drive is equipped with an RTS5763DL controller and comes in capacities of 1TB and 2TB.

The TEAMGROUP T-CREATE CLASSIC is the company’s newest PCIe SSD to hit the market and is the Gen3 model of the line (there’s also a Gen4 version). Though this NVMe drive is certainly an entry-level consumer release, the company claims that the T-CREATE CLASSIC is designed specifically for the creative professionals whose daily tasks include the simultaneous use of multiple programs. Featuring 3D TLC flash, the DRAM-less T-CREATE drive is equipped with an RTS5763DL controller and comes in capacities of 1TB and 2TB.

For performance, TEAMGROUP expects their new drive to reach speeds up to 2.1GB/s read and 1.7GB/s write for the 1TB capacity (using the Crystal Disk Mark benchmarking software), while both models are quoted to deliver a maximum of 220,000 IOPS read and 200,000 IOPS write. It also features an MTBF rating of 1.5 million hours and supports high-rate LDPC (Low-Density Parity Check) ECC functionality to help ensure data safety and integrity.

Other than that, TEAMGROUP doesn’t go into many details about the drive. After looking over the drive, we did discover that it does feature a Realtek RTS5763DL controller. This a client-based controller launched in 2018 that can feature a range of different NAND configurations. It should be noted that Realtek no longer features storage controllers on its website.

The white label on the drive doubles as a heat sync, it’s actually constructed from aluminum. It can be easily removed if need be. The drive is backed by a 5-year warranty,  and goes for roughly $100 (1TB) and $200 (2TB), respectively.

Looking at SQL Server average latency, the CLASSIC had an average latency of  50ms placing it near at the very bottom of the leaderboard (by a large margin and just above the Samsung 980). 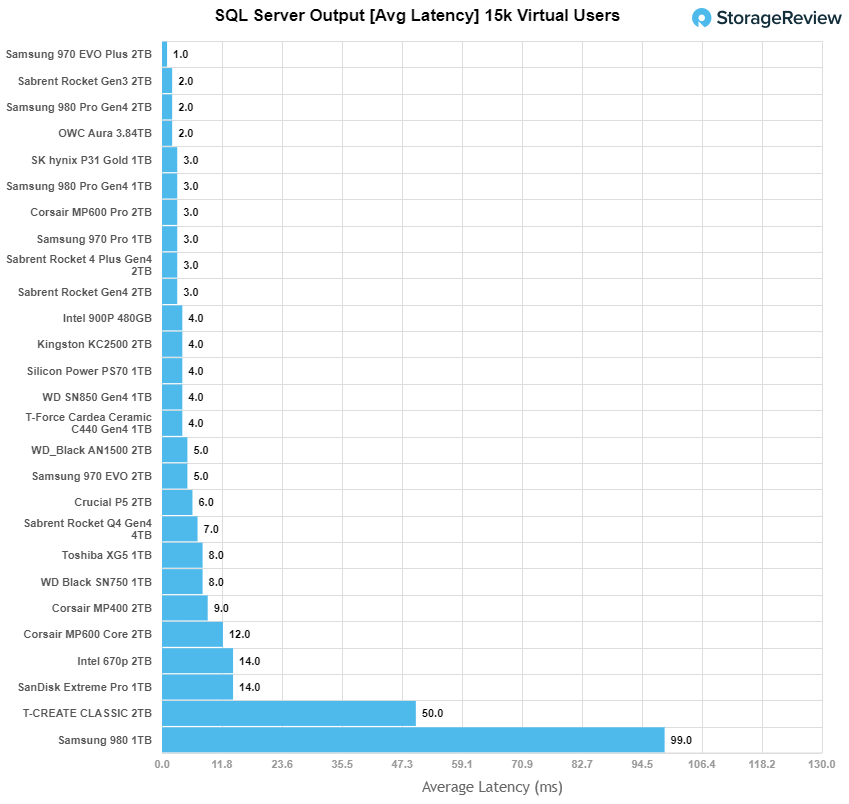 Here, we see the Gen3 CLASSIC hit 3,144.82 seconds, which places it near the bottom part of the leaderboard. 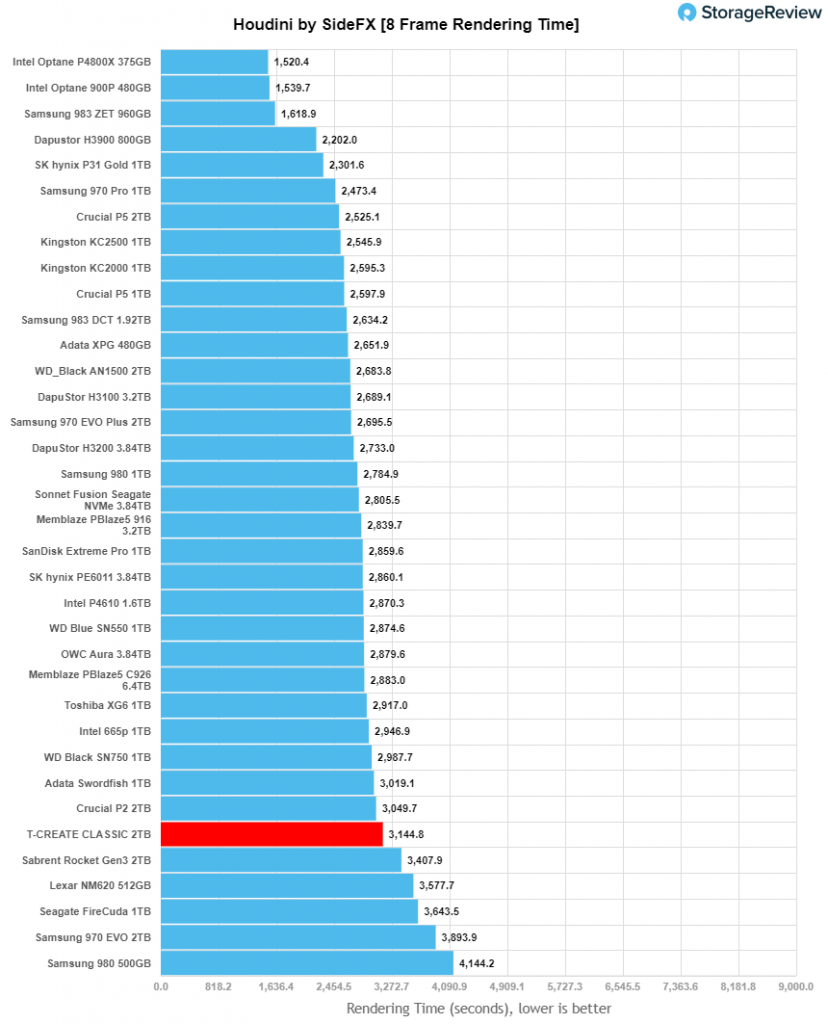 First up is random 4K read. Here the CLASSIC was dead last by a hugely significant margin, as it only was able to reach a peak of 5,988 IOPS (at 513.7 µs) with serious spikes along the way. To show just how slow this result was, the next best drive hit 83,401 IOPS, which was already far from the leaders’ performance.

After a retest to see if the low 4K read performance was an anomaly, we saw the same low speed again. It appears the drive gets so bogged down from the 4K write workload before the reads, that it can’t recover in time before the 4K read workload starts. As this is the process all other drives are tested with,  we will be keeping this number to ensure fair results for other drives.

Switching over to our 64K sequential workloads, the CLASSIC came in just behind the Lexar drive for 2nd-last in reads with a peak of 24,731 IOPS or 1.53GB/s at a latency of 646.2µs.

Next, we looked at our VDI benchmarks, which are designed to tax the drives even further. Here, it’s obvious that the TEAMGROUP CLASSIC struggled in all of these tests; however, like all entry-level drives, it was expected that read performance is the focus. Nonetheless, these tests include Boot, Initial Login, and Monday Login.

For the Boot test, the CLASSIC showed a peak of about 31,180 IOPS at 1,102µs, placing it behind only in front of the Lexar drive.

VDI Initial Login had the CLASSIC place last again with a peak of 7,574 IOPS and a latency of 3,189µs before it took a huge dip in performance ending up with 5,733 IOPS.

Finally, VDI Monday Login saw the TEAMGROUP drive with its most uneven results yet as you can see in the graph below. The drive peaked at 11,421 (at 1.397µs) before taking its last performance spike, which ended up at 8,252 IOPS.

The TEAMGROUP T-CREATE CLASSIC is the company’s latest consumer-grade M.2 SSD to hit the market, indicating that it is best suited for creative professionals like video editing and image design. However, it is certainly more entry-level than what TEAMGROUP describes on their product page, as it’s more appropriate for consumers looking to upgrade from an old HDD-based system (it’s probably best to avoid using this drive in any demanding workload environment).

That said, it leverages the PCIe Gen3 interface and quoted speeds up to 2.1GB/s read and 1.7GB/s write. The drive also uses an aging Realtek RTS5763DL controller, features built-in LDPC for reliability, and comes in just two capacity models (1TB and 2TB).

For performance, we ran Houdini by SFX, SQL and VDBench tests. The T-CREATE CLASSIC showed very disappointing results, placing at the bottom of the leaderboard in virtually every test (and sometimes by a huge margin). First up is Houdini, where rendered in at 3,144.82 seconds, which placed it near the bottom of the leaderboard. Looking at Peak VDBench scores, the CLASSIC recorded 5,988 IOPS in 4K read (the lowest we’ve ever seen in a few years), 24,580 IOPS in 4K write, 1.53GB/s in 64K read, and 296.3MB/s in 64K write. In our VDI tests, the drive hit 31,180 IOPS in boot, 7,574 IOPS IOPS in Initial Login, and 11,421 in Monday Login.

The TEAMGROUP T-CREATE CLASSIC is a drive meant for creative (i.e., intensive) applications; however, as you can see from the performance above, it really shouldn’t be used for that, or much of anything to be honest. Overall, the CLASSIC might have satisfactory performance in day-to-day use, but it must be dirt cheap even for this modest need. To spend $100-$200 on a drive like this when there are so many other faster and less expensive choices readily available is lunacy.