This is the first time our StorageReview Labs have seen a product from the Chinese-based company, Union Memory, so we are eager to analyze how it compares to the more well-known and established brands like Intel, Samsung and Memblaze.

The UH810 uses the standard 2.5-inch form factor (SFF-8639 connector) and is designed for scenarios with intensive-read workloads. Union Memory also offers the UH830 series, which is meant for those who have more mixed read/write use cases.

Here’s a quick rundown of the two series with their endurance ratings: 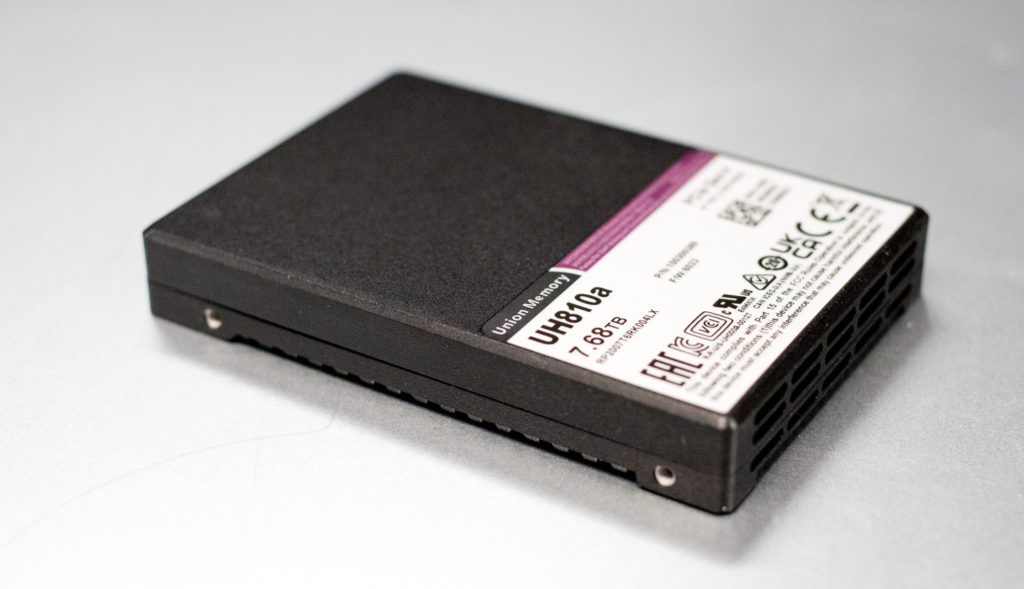 Another interesting feature of the UH810a is its support for online activation of firmware upgrades, which Union Memory indicates only takes 1 second. This means you won’t have to engage a power cycle (i.e., turn it off and then back on) to update the drive, which certainly makes maintenance more seamless and downtime minimal.

For our SQL Server transactional benchmark, the UH810a was placed third with a solid 12,650.3 TPS.

Looking at our Sysbench transactional benchmark, the Union Memory UH810a had 10,322 TPS.

With Sysbench average latency, the UH810a remained in 2nd last and just behind the Micron 7400 Pro with 12.40ms. Still a few milliseconds better than the Intel though.

For our worst-case scenario latency (99th percentile) the Union Memory UH810a moved up a bit with a solid 22.50ms.

In our first VDBench Workload Analysis, Random 4K Read, the Union Memory UH810a had an impressive peak performance of 1.49 million IOPS at a latency of 343.2µs, which was slightly better than the Memblaze and 1st among the tested drives.

Switching over to 64k sequential workloads, the UH810a fell back just a bit, posting 6GB/s read (96K IOPS) at 665µs in latency for third place.

The Union Memory drive picked up the pace for 16K write performance, peaking at just 157K IOPS (2.45GB/s) with a latency of 97.7µs (though spiking at the end).

Our next set of tests is our SQL workloads: SQL, SQL 90-10, and SQL 80-20, all of which showed similar results across all tested drives. Starting with SQL, the Union Memory drive placed fourth with a peak performance of 249K IOPS at a latency of 127.6µs.

With SQL 80-20, the UH810a ended up with similar performance as the Samsung and Intel drives, eventually peaking at 246K IOPS at a latency of 127.6µs.

Next, we switched over to our VDI clone test, Full and Linked. For VDI Full Clone (FC) Boot, the UH810a showed solid results, peaking at 208K IOPS with a latency of 164.6µs.

VDI FC Initial Login, the UH810a peaked at 119K IOPS (247.4µs) before taking a noticeable hit in performance at the end.

With VDI FC Monday Login, the Union Memory UH810a showed a solid peak of 97K IOPS at a latency of 162.5µs, which was not far back from the speedy Memblaze drive.

In VDI LC Initial Login, the UH810a’s performance was very consistent throughout once again, posting a peak of 53K IOPS at a latency of just 146.8µs

For VDI LC Monday Login, the UH810a continued its impressive streak of solid performance, peaking around 75K IOPS with a latency of 209.2µs, which was good enough for 2nd place again. 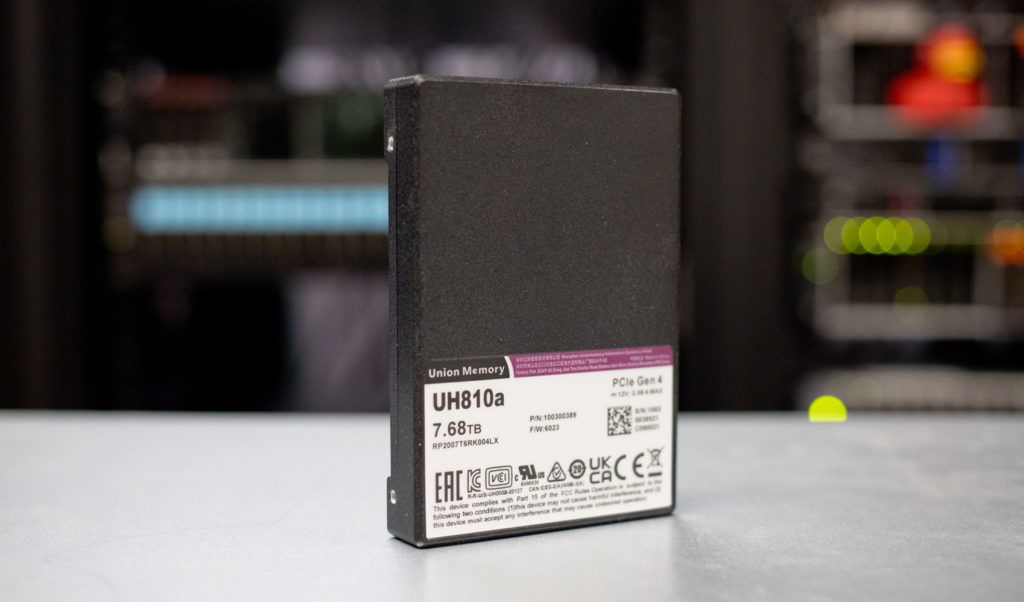 While Union Memory describes the UH810a as a read-intensive solution (which certainly proved to be true), it also had impressive write performance in most of our tests.

That said, we tested the UH810a against five other PCIe Gen4 enterprise 7.68TB SSDs with similar specifications and applications: the Samsung PM9A3, Memblaze PBlaze6 6920, Intel P5510, Micron 7400 Pro and, most recently, KIOXIA CD6. We looked at both application workload analysis and VDBench workloads during our analysis.

In our Sysbench tests, the UH810a performed very well with aggregate scores of 10,322 TPS, 12.40ms in average latency, and 22.50ms in a worst-case scenario. Results told a similar story during our SQL Server transactional benchmark, posting 12,650.3 TPS and an average latency of 2.83ms for third place in both categories.

Overall, Union Memory’s UH810a was an impressive showing, keeping pace with (and sometimes even surpassing) the more well-known brands. This was specifically evident in its 4K read and write performance, where it took first place among all tested drives. We would certainly like to see more of their storage solutions in our lab to see what they can do.