The WD_BLACK SN850 NVMe PCIe 4.0 SSD is the latest edition to the company’s portfolio of high-performance drives specifically catered to the gaming demographic. As such, the need for speedy storage is more important than ever with the growing complexity of game design; especially with the release of the newest generation of consoles, the PlayStation 5 and Xbox Series X, both of which leverage the PCIe Gen4 interface (though the PS5 is the only one that supports 3rd-party drives). The WD_BLACK SN850 has been built to specifically meet these needs. Aside from Gen4 technology, the SSD also uses the WD_BLACK G2 controller, improved low queue-depth performance, and a new cache technology. Not only will these combined features significantly speed up level loading times in the gaming world, but they claim will also make the PC run faster overall.

The WD_BLACK SN850 NVMe PCIe 4.0 SSD is the latest edition to the company’s portfolio of high-performance drives specifically catered to the gaming demographic. As such, the need for speedy storage is more important than ever with the growing complexity of game design; especially with the release of the newest generation of consoles, the PlayStation 5 and Xbox Series X, both of which leverage the PCIe Gen4 interface (though the PS5 is the only one that supports 3rd-party drives). The WD_BLACK SN850 has been built to specifically meet these needs. Aside from Gen4 technology, the SSD also uses the WD_BLACK G2 controller, improved low queue-depth performance, and a new cache technology. Not only will these combined features significantly speed up level loading times in the gaming world, but they claim will also make the PC run faster overall. 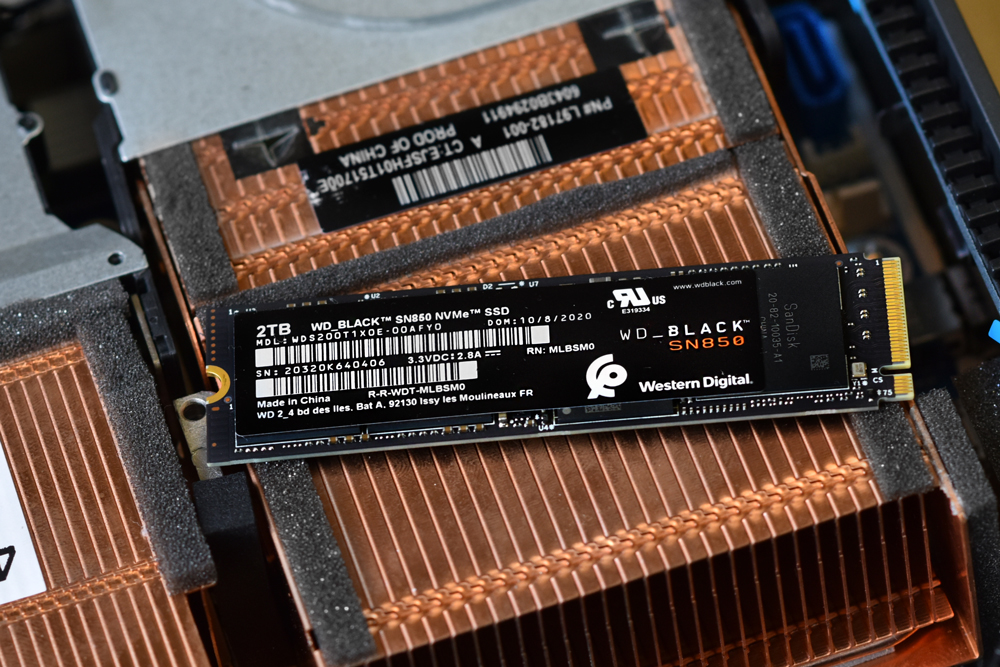 Because the WD_BLACK SN850 uses the new Gen4 interface, it will have the potential to hit some serious numbers, though each release we’ve seen so far hasn’t quite lived up to the technology’s true potential. That said, WD quotes their new drive to hit upwards of 7,000MB/s read and 5,300MB/s writes in sequential speeds, while random performance is specced to deliver up to 1 million IOPS read and 720K IOPS. These potential numbers will certainly make for a smooth gaming experience when playing graphics-intensive games. 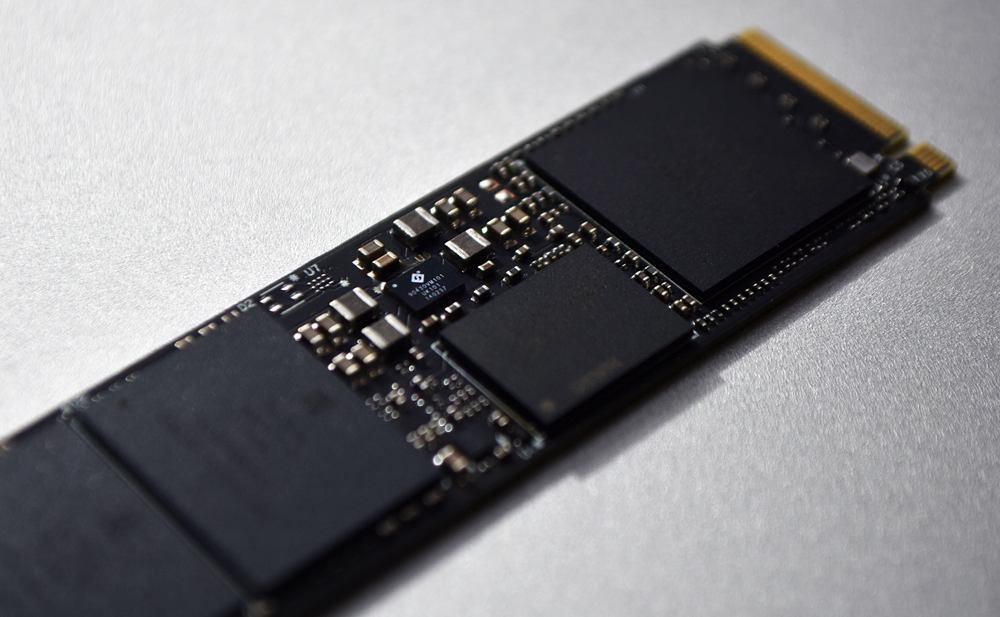 The new WD drive also supports the WD_BLACK Dashboard for Windows users, which allows users to monitor drive health and optimize drive performance via its gaming mode. The latter feature disables the low power mode function so the drive stays on full-power mode during the entirety of gaming sessions.

Backed by a 5-year warranty, the WD_BLACK SN850 NVMe SSD is available in 500GB, 1TB, and 2TB capacities starting at $150. We looked at the 1TB model for this review. The RGB-enabled heatsink model (for users looking to sustain longer peak performance) is slated for a release sometime in the first calendar quarter of 2021. This drive is also part of the more broad gaming release WD made a few weeks ago. We reviewed the PCIe add-in card previously.

As the product name indicates, the WD_BLACK SN850 features a modern all-black, single-sided design with the white font to make it really stick out as a drive. The front of the drive has the usual WD Black sticker, which displays the logo, model name, capacity, serial numbers, and other information. 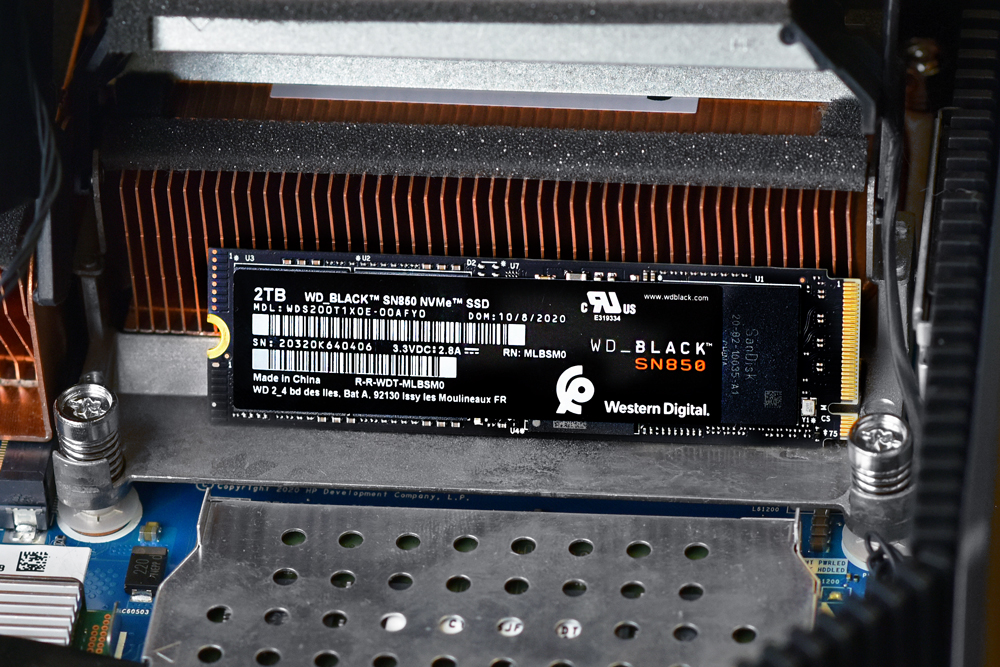 On the back, WD you can see the circuit board tracing and an overall clean one-sided appearance. 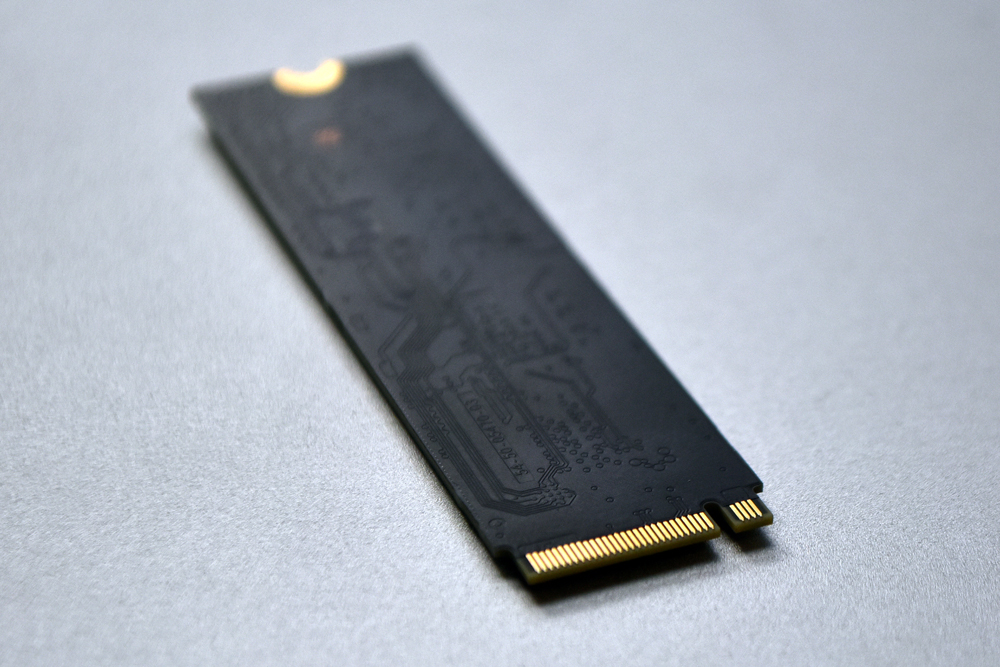 As we migrate into testing newer NVMe Gen4 SSDs, it required a platform shift in our lab to support the newer interface. Lenovo has been out in the front of the pack with PCIe Gen4 support, including up to the front-mount U.2 bays, while others still only offer edge-card support. In our Gen4 reviews, we leverage the Lenovo ThinkSystem SR635 server, equipped with an AMD 7742 CPU and 512GB of 3200Mhz DDR4 memory. NVMe is tested natively through an M.2 to PCIe adapter card in the edge-card slot, while U.2 drives are loaded in the front. The methodology used better reflects the end-user workflow with the consistency, scalability, and flexibility testing within a virtualized server offers. A large focus is put on drive latency across the entire load range of the drive, not just at the smallest QD1 (Queue-Depth 1) levels. We do this because many of the common consumer benchmarks don’t adequately capture end-user workload profiles.

For our SQL Server transactional benchmark, the WD_BLACK SN850 posted 3,159.6 TPS. Though it was a good score, it was still behind the Samsung or Sabrent Gen4 drives. 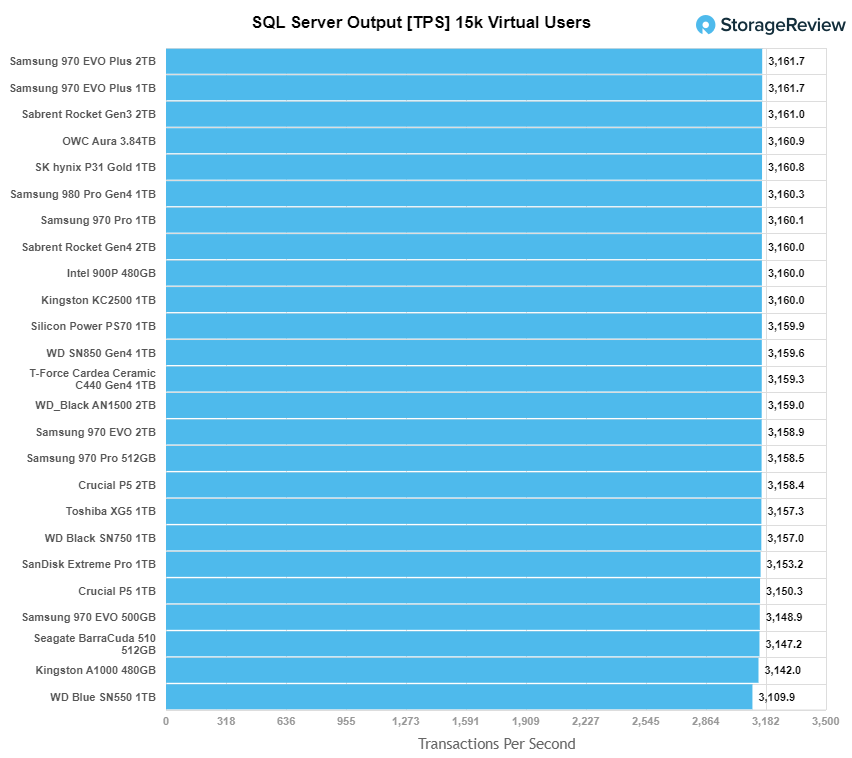 Moving on to latency, the WD_BLACK SN850 drive posted just 4.0ms, which placed it among the leaders and just under that newest Samsung Pro drive. 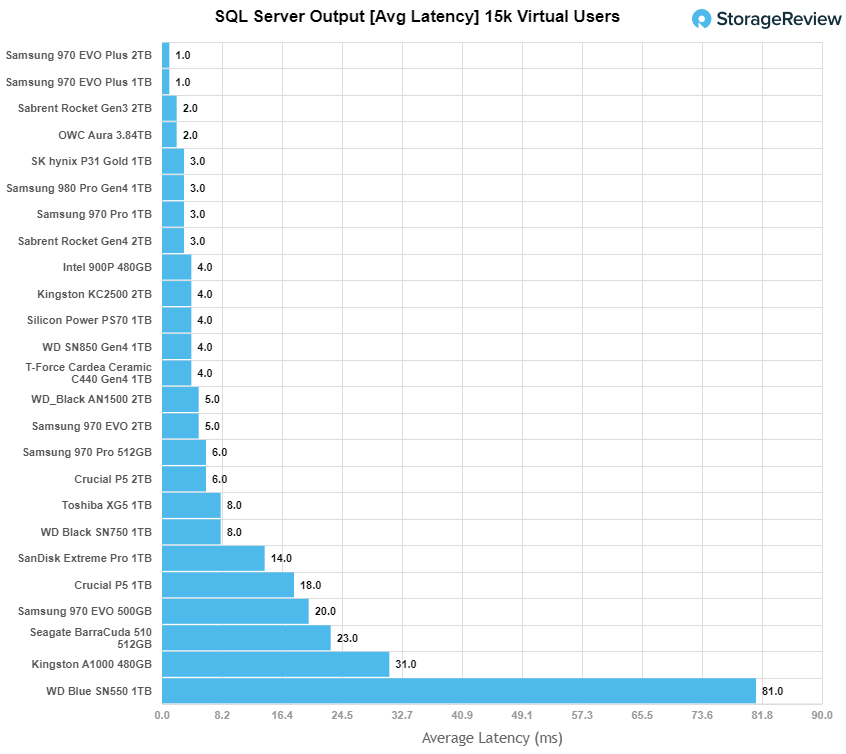 When it comes to benchmarking storage devices, application testing is best, and synthetic testing comes in second place. While not a perfect representation of actual workloads, synthetic tests do help to baseline storage devices with a repeatability factor that makes it easy to do apples-to-apples comparison between competing solutions. These workloads offer a range of different testing profiles ranging from “four corners” tests, common database transfer size tests, to trace captures from different VDI environments. All of these tests leverage the common vdBench workload generator, with a scripting engine to automate and capture results over a large compute testing cluster. This allows us to repeat the same workloads across a wide range of storage devices, including flash arrays and individual storage devices. Our testing process for these benchmarks fills the entire drive surface with data, then partitions a drive section equal to 5% of the drive capacity to simulate how the drive might respond to application workloads. This is different from full entropy tests which use 100% of the drive and take them into a steady state. As a result, these figures will reflect higher-sustained write speeds. Additionally, as VDBench operates with synchronous I/O in Linux versus asynchronous I/O, some of the performance data will differ between the data we collect and what is published in spec sheets. The important part to consumer though is that test data is comparable from the same test conditions, be it VDBench versus VDBench, IOMeter vs IOMeter, or FIO vs FIO.

In 4K random read, the WD_BLACK SN850 was the best performer by far, posting a peak performance of 790,094 IOPS at a latency of 160.1µs.  Latency at the lower load levels though was higher than the rest of the group.

In 64K sequential writes, we again saw the new WD drive with great results (still lagging behind the Samsung drive, but not as much this time) with a peak performance of 24,424K IOPS (or 1.52GB/s) at 647µs.

Next, we looked at our VDI benchmarks, which are designed to tax the drives even further. In Boot, the WD_BLACK drive easily took the top spot, posting a peak of 168,947 IOPS at 190.7µs.

In our last test, VDI Monday Login, the WD drive showed a peak IOPS at 35,695 IOPS at just under 200ms before taking a big performance hit.

The WD_BLACK SN850 is the latest PCIe 4.0 SSD to hit the storage market, specifically targeting the gaming and the prosumer demographic. The timing of its release couldn’t be more perfect if you’re a console gamer, as both next-gen systems (PlayStation 5 and Xbox Series X) hit store shelves this week; though as of this review, the PS5 is the only system that supports 3rd party drives. Nonetheless, the SN850 is an excellent release by the company for pretty much any consumer application. Coupling its WD_BLACK G2 controller, improved low queue-depth performance, and new cache technology made for a very impressive showing in tests, specifically a dominating performance in read activity. 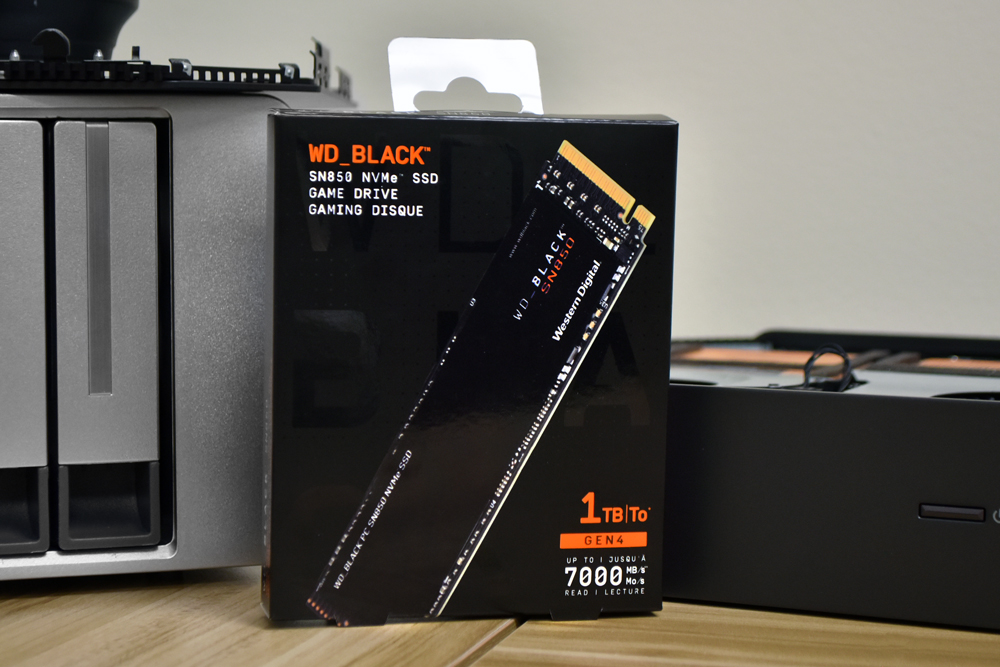 Though we don’t have the heatsink model on hand due to its release date early next year, those planning to put their WD_BLACK SN850 through the wringer (or if your workstation is an area that gets fairly warm and doesn’t have the greatest airflow configuration), might want to wait for it, or grab a 3rd party solution. This will certainly help with any throttling issues your PC might inflict during intense gaming sessions and other resource-intensive hardware and will be particularly useful if you need sustained performance.

That said, WD has certainly produced a winner and a drive that surprisingly looks like a real competitor for Samsung. This is no easy feat and something we rarely see in the consumer storage market. As far as pricing goes, the WD_BLACK SN850’s 500GB model goes for $150, which is identical to the 500GB Samsung 980 Pro. Though without knowing the retail of its high capacity models, it’s hard to make any meaningful comparisons between WD and Samsung. You can rest assured, however, that the new WD_BLACK SN850 is one of the best consumer-grade drives on the market today and the leader in read performance by leaps and bounds.