The Kingston KC3000 is the company’s latest premium SSD offering available in the industry-standard M.2 2280 form factor and in capacities from 512GB to 4TB. Specifically designed for enthusiasts and power users looking to get the most out of the new NVMe Gen4 interface, Kingston indicates that the KC3000 is best suited for 3D rendering and 4K+ content creation software applications.

The Kingston KC3000 is the company’s latest premium SSD offering available in the industry-standard M.2 2280 form factor and in capacities from 512GB to 4TB. Specifically designed for enthusiasts and power users looking to get the most out of the new NVMe Gen4 interface, Kingston indicates that the KC3000 is best suited for 3D rendering and 4K+ content creation software applications. 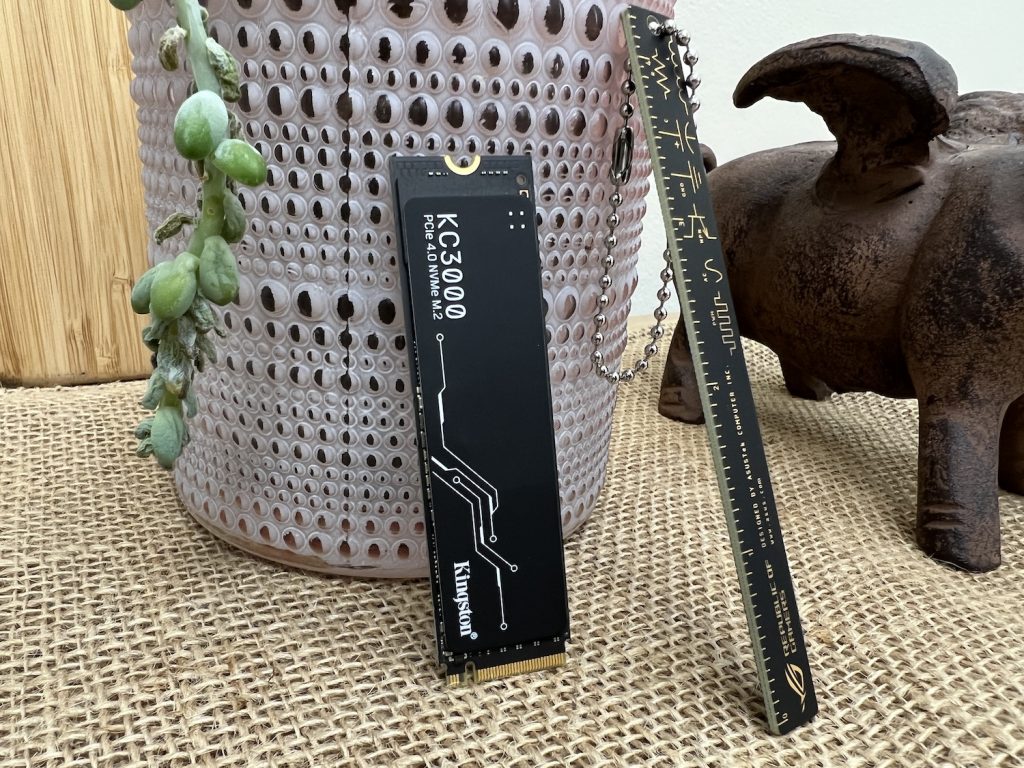 The new Kingston offering is also the latest Gen4 SSD to use the effective combination of the Phison PS5018-E18 controller and Micron’s B47R 3D TLC NAND.  The E18 leverages the new TSMC 12nm process node (a significant improvement from the previous 28nm), which increases performance by up to 25% over the previous generation. This noticeable difference allows greater power efficiency and lower thermal output. All of the combined means faster potential performance of SSDs. We previously saw the E18 used inside drives like the Seagate FireCuda 530 and Corsair MP600 Pro XT, and expect more of the same impressive numbers in our Kingston KC3000 charts.

Unsurprisingly, Kingston quotes their new KC3000 drive with a pretty impressive performance profile with read and write speeds of 7GB/s and 7GB/s, respectively, for the 2TB and 4TB models. Random 4K performance is quoted to reach up to 1 million IOPS for both reads and writes. These numbers are exactly what the Phison E18 controller indicates it tops out at. 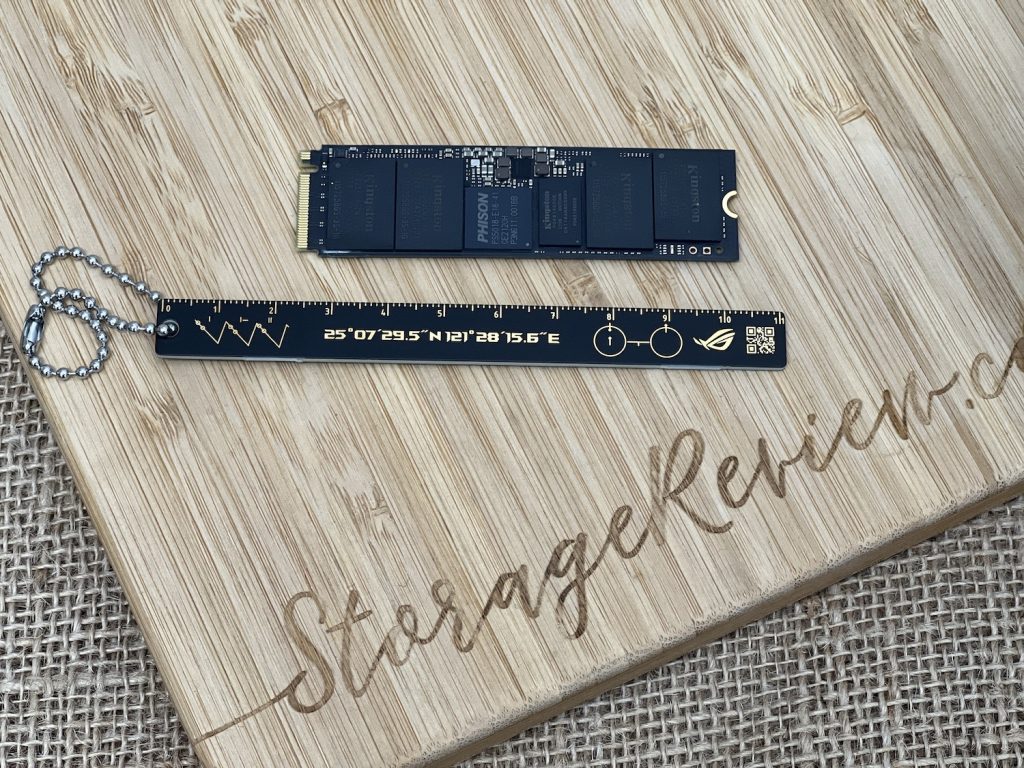 For reliability, the KC3000 has an MTBF of 1,800,000 hours and an endurance rating (total bytes written) of 1.6PBW for the 2TB capacity model. The latter value is noticeably lower than the Seagate Firecuda 530‘s 2.55PBW. It’s higher than Corsair though, which continues this inconsistent endurance spec on E18 SSDs. 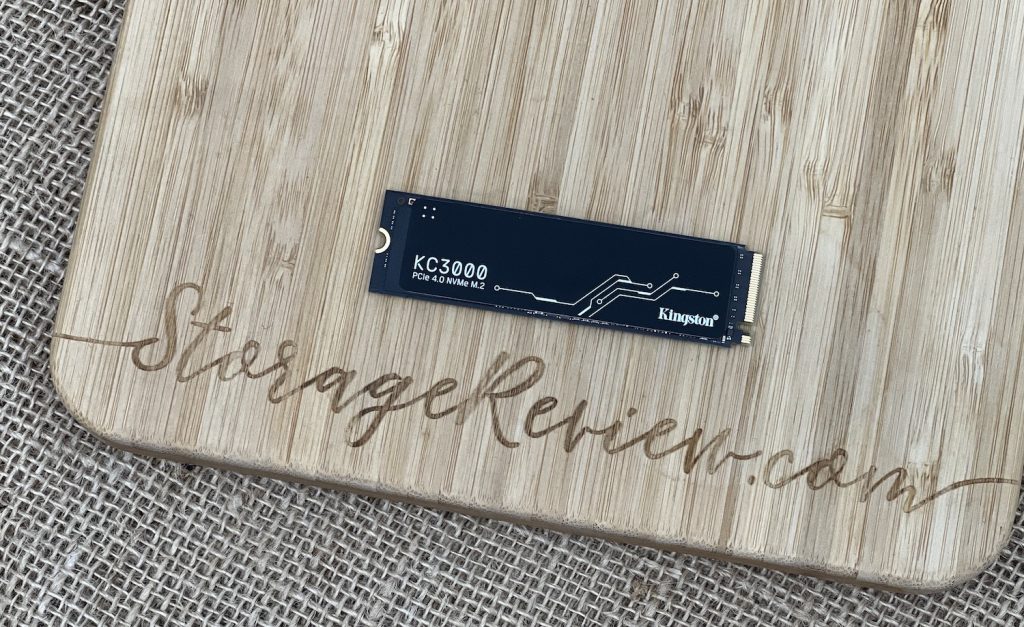 The KC3000 sports a nice all-black design that displays the main interface specifications and Kingston branding, while the backside features a sticker with all the usual suspects: drive capacity, certifications, manufacturing information. The drive itself uses a graphene aluminum heat spreader (which is highlighted by its effective thermal conductivity) to help disperse heat while keeping the drive nice and cool during intensive use cases. 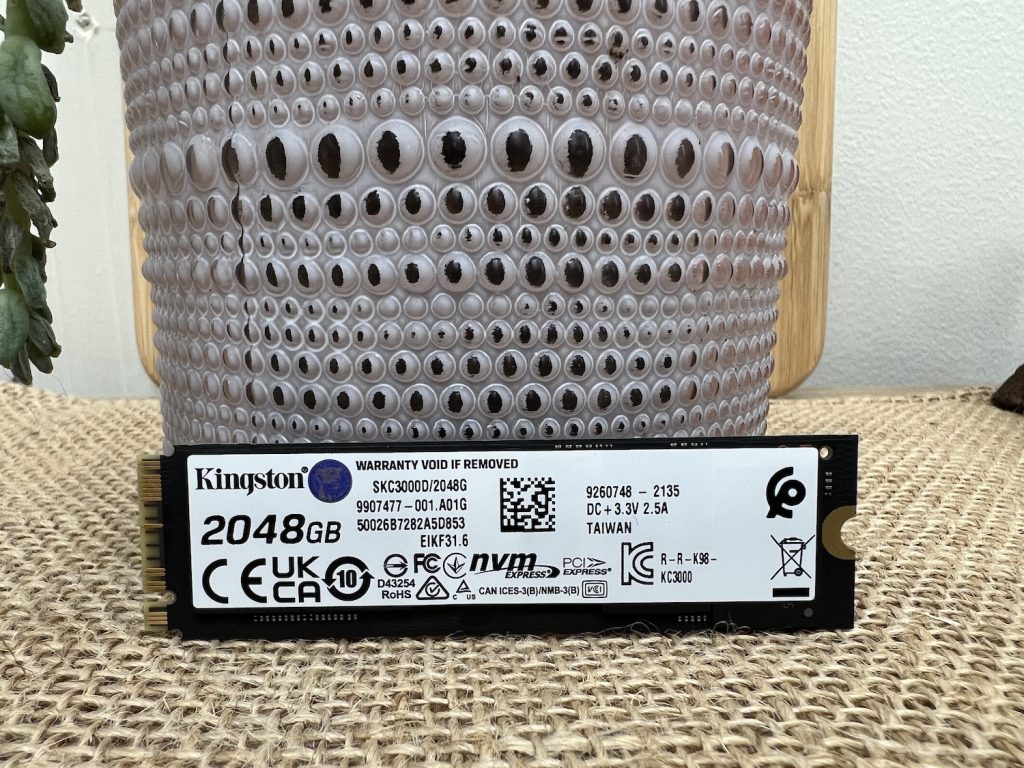 Backed by a limited 5-year warranty and free technical support, the Kingston KC3000 is available in 512GB, 1TB, 2TB, and 4TB models. We will be looking at the 2TB model for this review. 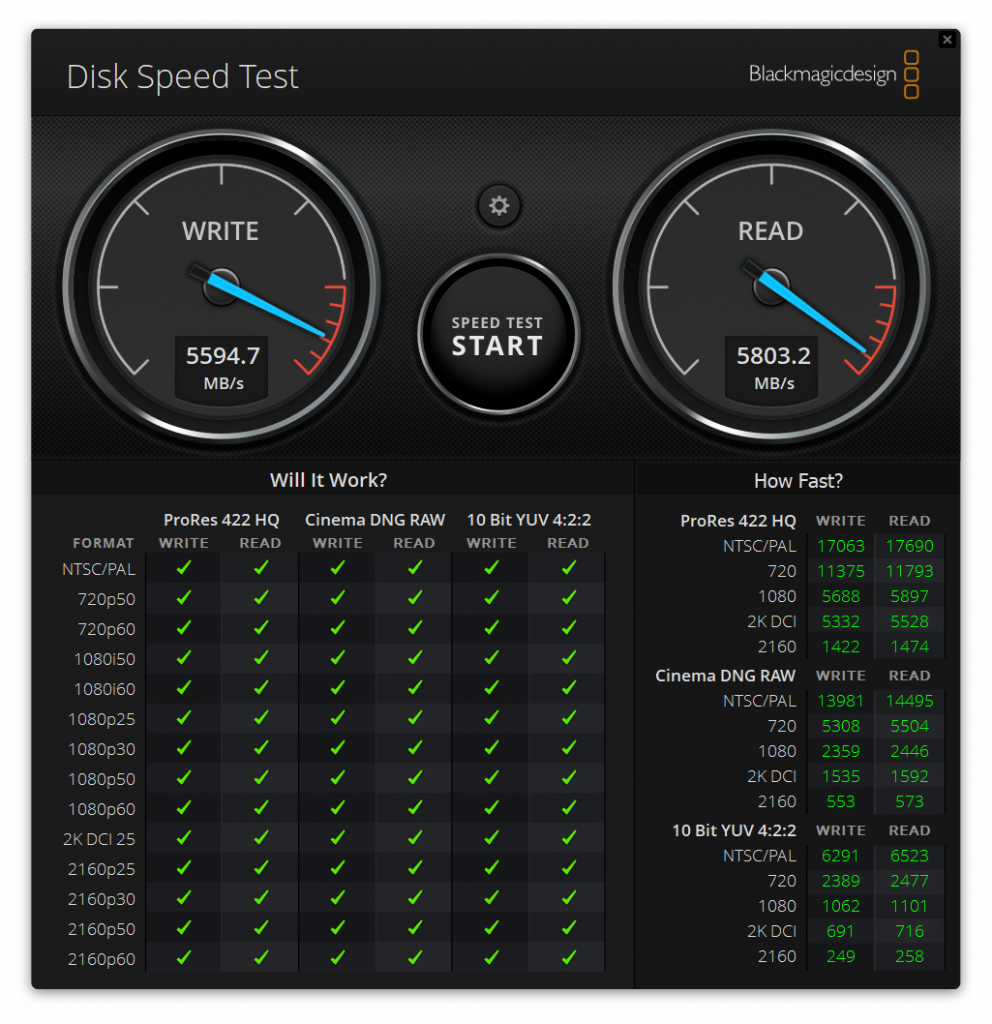 Looking at SQL Server average latency, the new Kingston drive showed a solid average latency of 3ms, which placed it at the upper part of the leaderboard and alongside Samsung’s flagship SSD, the Samsung 980 Pro. 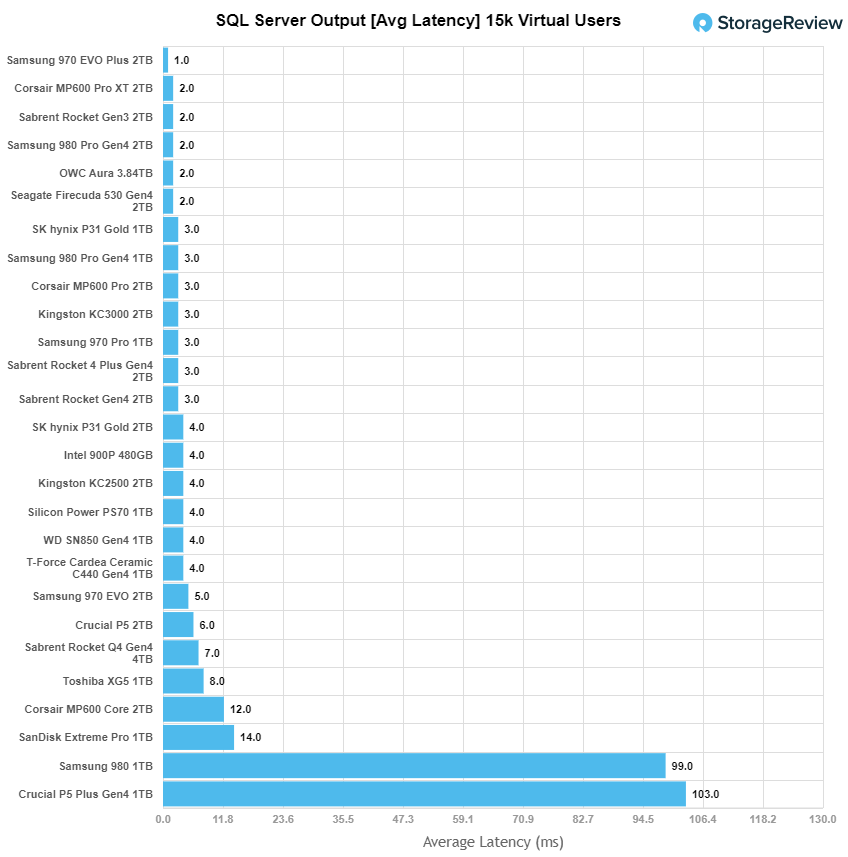 First up is our random 4K read. Here, the Kingston KC3000 SSD showed very similar performance as the Seagate Firecuda and the Corsair MP600, narrowly beating the two drives at the end. It peaked at 585,182 IOPS with latency of 216.5µs, which placed it 2nd overall though well back of the WD SN850 drive.

In 4K write, the Kingston drive went on to peak at just over 445,331 IOPS with latency at about 281.7µs. This placed it third, but still well behind the Seagate and Corsair drives, which boasted over 100K IOPS more.

Switching over to sequential workloads, the new Kingston drive performed much better than all the other tested drives peaking at 105,888 IOPS (6.62GB/s) and 301µs latency. Though this didn’t quite make it to its top quoted numbers, it is still one of the fastest consumer drives we’ve seen in sequential reads.

Next, we switched over to our VDI full clone test. For our boot profile, the Kingston KC3000 SSD peaked at 129,099 IOPS at a latency of 261.5µs. This was good enough for second place, though well behind the first place WD SN850.

VDI FC Initial Login saw all the drives with unstable results. That said, the KC3000 topped out at roughly 70K IOPS at 426.4 µs in latency before taking a severe spike in performance to end the test.

The KC3000 is the newest premium drive offering from Kingston available in capacities of 512GB, 1TB, 2TB, and 4TB, all of which use the Gen4 interface. Its graphene aluminum heat spreader also helps to effectively disperse heat while keeping the drive cool during intense usage, making it a great choice for hardware enthusiasts and prosumers looking. 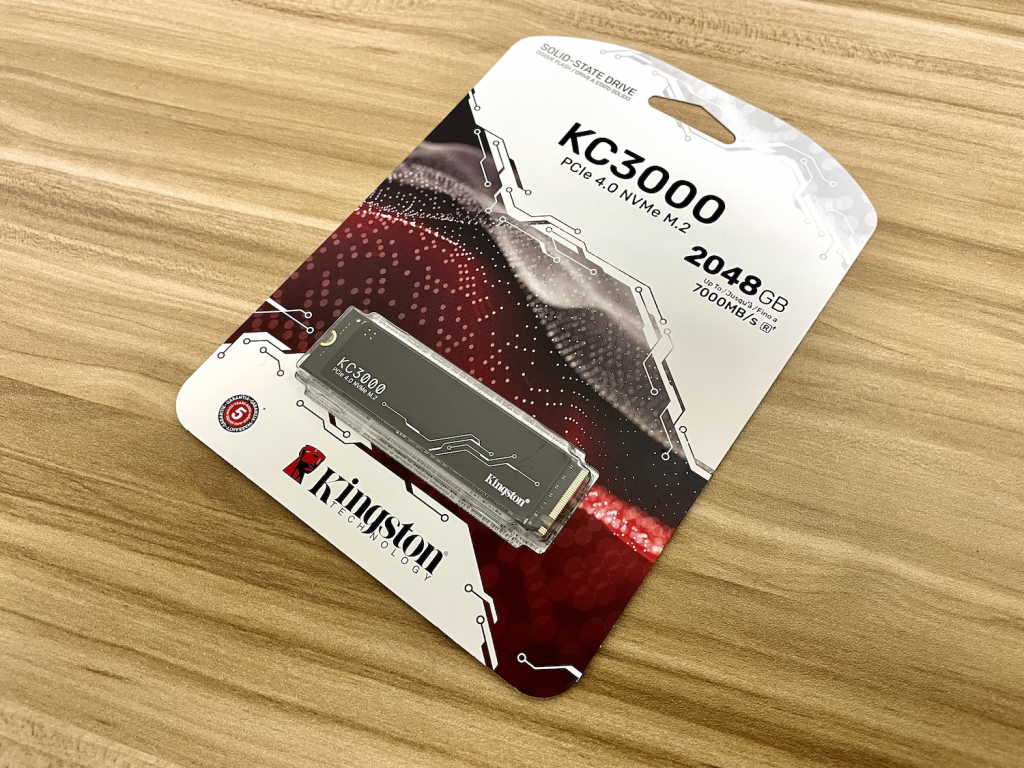 Though Kingston owns the process of nearly everything in their SSD solutions, (including the design, qualifications, manufacturing, testing, packaging, and even shipping), they are still not a vertically integrated SSD manufacturer. As such, Kingston needs to source and qualify controllers and NAND, combined with internal processes, to deliver a completed SSD. Thankfully, their selection of the Phison E18 and Micron B47R combination allows Kingston to offer a very competitive performance profile with the KC3000. It performs very well in our tests (specifically in sequential reads).

The Kingston KC3000 wants to be in the conversation with Gen4 SSD leaders like the Samsung 980 Pro, WD SN850, and FireCuda 530. The KC3000 certainly showed that it can compete at that level, as it outpaced the popular Samsung drive in virtually all of our tests, especially its bar-setting setting transfer speeds in sequential reads. All of this combined makes the KC3000 an impressive release from Kingston, and a drive we highly recommend for enthusiasts and content creators.