The Sabrent Rocket 4 Plus is the company’s newest addition to their NVMe PCIe Gen4 portfolio. Released back in December, the Rocket 4 Plus comes equipped with the new Phison PS5018-E18 controller, which was demonstrated at the CES 2021 in January, and features TLC NAND and DDR4 cache. It currently is available in capacities up to 2TB, with the 4TB model expected to be available in the coming months.

The Sabrent Rocket 4 Plus is the company’s newest addition to their NVMe PCIe Gen4 portfolio. Released back in December, the Rocket 4 Plus comes equipped with the new Phison PS5018-E18 controller, which was demonstrated at the CES 2021 in January, and features TLC NAND and DDR4 cache. It currently is available in capacities up to 2TB, with the 4TB model expected to be available in the coming months. 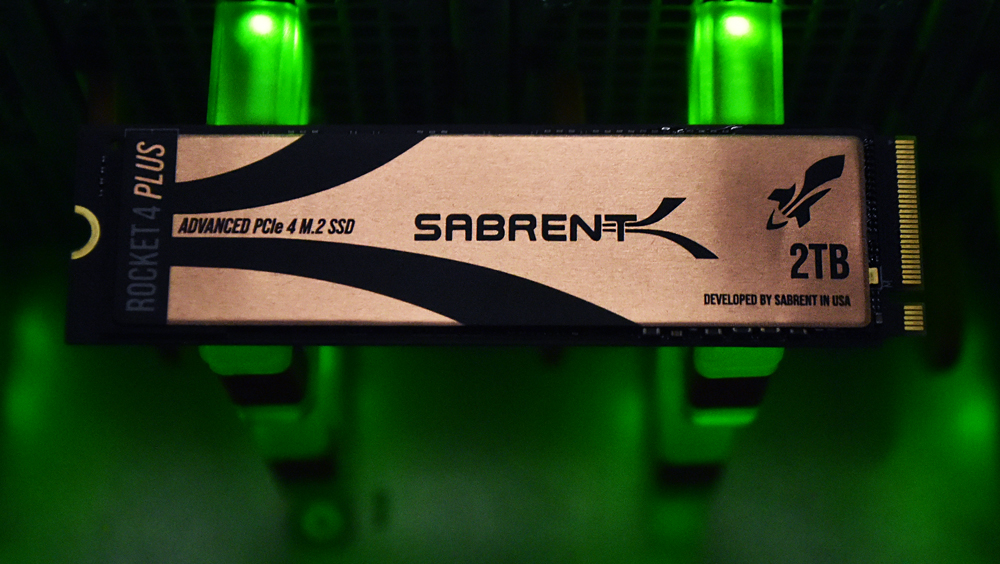 Looking first at performance, the Rocket 4 Plus is quoted to deliver sequential read and write speeds up to 7.1GB/s and 6.6GB/s, respectively while random speeds are expected to reach up to 650,000 IOPS read and 700,000 IOPS write for the 2TB model. While reads are mostly the same with the 1TB model, it is quoted with noticeably less write performance with 5.3GB/s in sequential and 350,000 IOPS in random speeds.

That said, though PCIe Gen4 is all about the next level of performance for SSDs, supported motherboards are still very limited for now. This means users will only be able to get close to these potential numbers only if their system has a specific set of compatible components. Even so, we haven’t seen a drive yet that has been able to take full advantage of the new performance ceiling that this new PCIe interface offers. The SSD is backward compatible with PCIe 3.0, though the Sabrent drive would be maxed out at the interface’s limit of 3.5GB/s if you install it on this type of motherboard.

The Sabrent Rocket 4 Plus has an optional heatsink made of aluminum and copper to help dissipate heat during intense workloads to avoid throttling. It is fully compatible with single/double-sided M.2 2280 SSDs. Though this beast is not really necessary for most use cases, it will certainly keep the drive cool, or at least looking cool, if you have the room in your PC case.

To assist with managing the SSD over time, the Rocket 4 Plus comes with Sabrent Rocket Control Panel, an SSD management software that offers features like displaying the health of the drive and firmware upgrades. Users also have access to the company’s own version of Acronis True Image, an integrated backup software suite that allows for easy data recovery in the event of unexpected disasters like power outages, accidental deletions, and hard drive crashes.

Backed by a 5-year warranty (when the drive is registered), the Sabrent Rocket 4 Plus goes for roughly $300 and $400 for the 1TB and 2TB models, respectively. We will be looking at the 2TB model for this review.

Sabrent Rocket 4 Plus Design and build

The Rocket 4 Plus features the same overall design as the other recently released Sabrent drives. It has a slick black and copper-colored sticker, which displays the company logo, product name, and drive capacity. 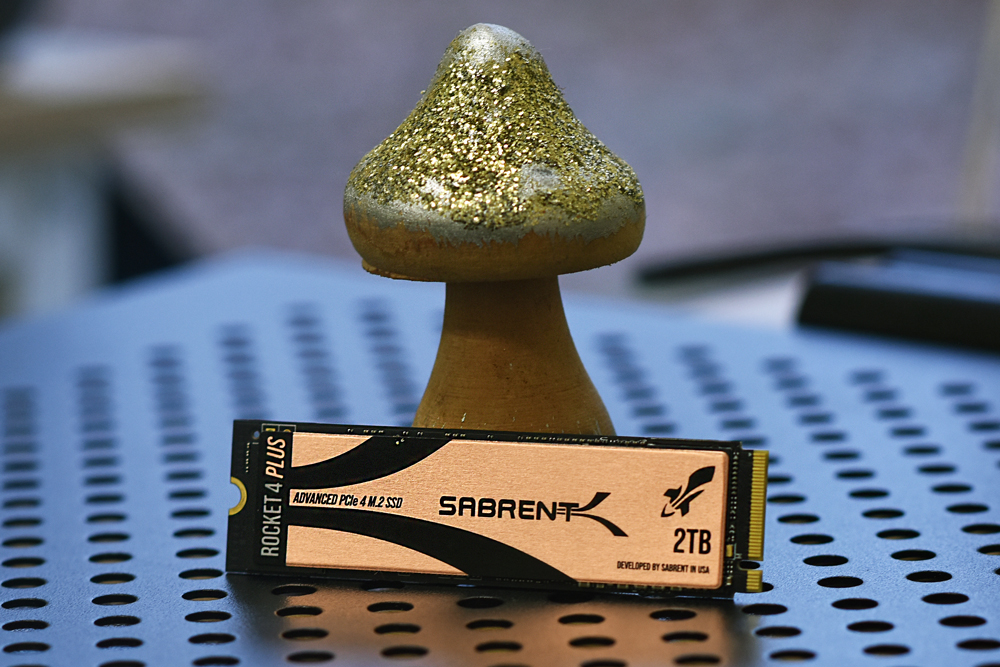 Turning the drive reveals the usual sticker with other detailed information about the drive, including serial numbers and certifications. 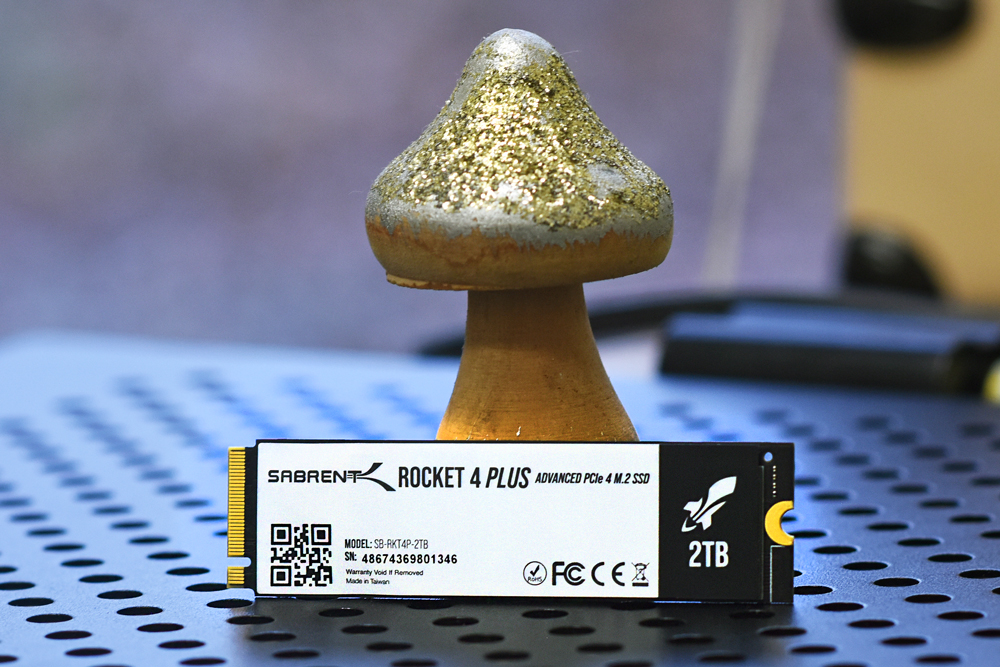 The Rocket 4 Plus also comes with an optional heat sink pad that consists of a top heat spreader, copper heat coils (which effective head dissipation), an aluminum heat sink, and thermal tape on the top. Underneath, is another strip of thermal tape and an aluminum tray. This comprehensive and sizable heat sink certainly helps to keep the drive cool during heavy workloads while curbing performance throttling due to high thermal levels.

While this heat sink is not really necessary, it certainly gives the drive a very unique look.

As we migrate into testing newer NVMe Gen4 SSDs, it required a platform shift in our lab to support the newer interface. Lenovo has been out in the front of the pack with PCIe Gen4 support, including up to the front-mount U.2 bays, while others still only offer edge-card support. In our Gen4 reviews, we leverage the Lenovo ThinkSystem SR635 server, equipped with an AMD 7742 CPU and 512GB of 3200Mhz DDR4 memory.

Looking at SQL Server average latency, the Sabrent drive showed a solid average latency of 3ms, placing among the leaders of the long list of tested consumer drives, and right up there with the Samsung 970 Pro. 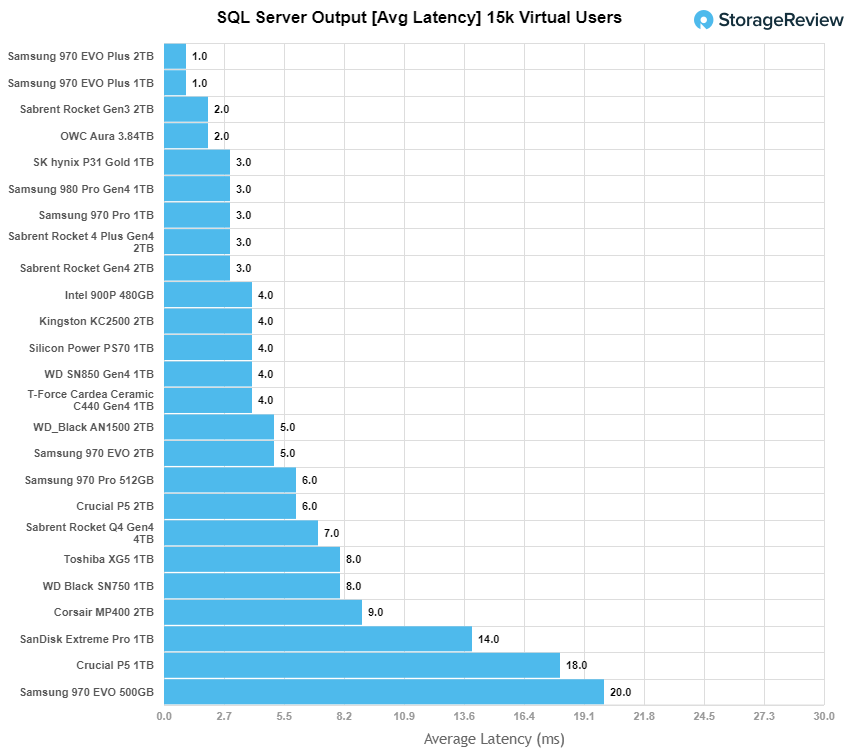 For 4K random write, the Rocket 4 Plus posted much better results, with a peak of 226,955 IOPS at a latency of 558µs for second among the tested drives; however, it was still well back of the Samsung 980 Pro.

Switching over to sequential workloads, we first look at 64K read. Here, the Sabrent Rocket 4 Plus boasted very impressive performance, beating all other tested drives with a peak of 78,315 IOPS (or 4.89GB/s) at a latency of 407.5µs.

Next, we looked at our VDI benchmarks, which are designed to tax the drives even further. These tests include Boot, Initial Login, and Monday Login. Looking at the Boot test, the Sabrent Rock Plus 4 showed steady performance throughout, with a peak of 111,447 IOPS at a latency of 290.5µs.

In Initial Login, the Rocket 4 Plus showed a peak performance of 55,174 IOPS at a latency of 539.6µs, though it became more unstable nearing the end of the test.

Our VDI Monday Login told a similar story, as the Sabrent had the best peak performance by a mile with 20,361 IOPS before it took a significant hit in latency all the way up to 866.6µs near the very end of the test.

To further test the Sabrent Rocket 4 Plus, we ran the Blackmagic Disk Speed Test on the Lenovo ThinkStation P620.

Here, the Rocket 4 Plus hit 5.3GB/s read and 5.9GB/s write, numbers that didn’t quite reach its quoted performance by Sabrent. 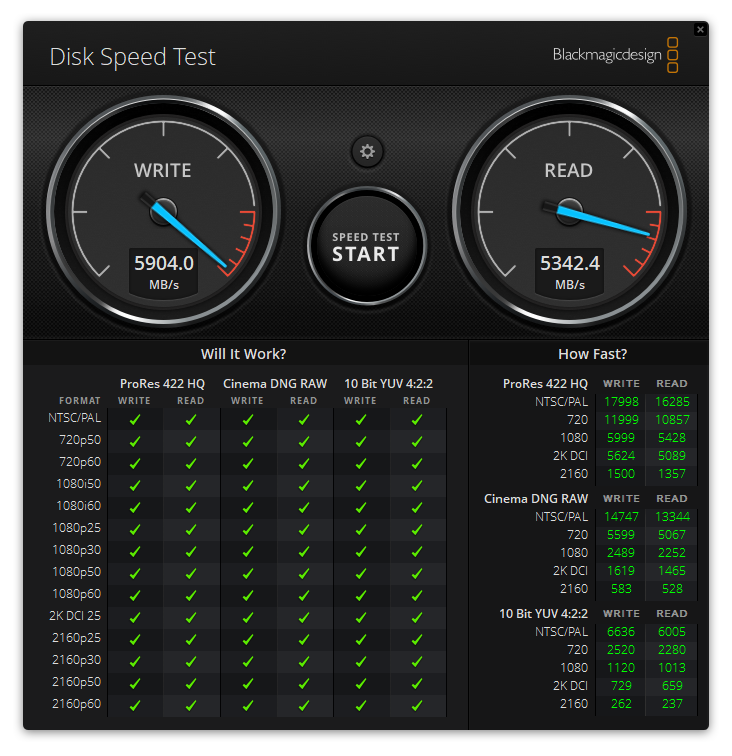 The Sabrent Rocket 4 Plus NVMe SSD is a solid-performing M.2 2280 drive that leverages the new PCIe Gen4 interface and TLC NAND Flash memory. Available in capacities up to 2TB (though a 4TB model is on the horizon), the Rocket 4 Plus supports both SMART and TRIM commands, Advanced Wear Leveling, Bad Block Management, Error Correction Code, and Over-Provision technology.

Like the other Rocket drives from the Sabrent line, 4 Plus comes bundled with software like Acronis True Image as well as the company’s handy SSD toolbox for easy access to the drive’s health and firmware updates. The main differences between this drive and the recently-released Rocket 4 are the controller. The Rocket Plus 4 uses the new Phison PS5018-E18 while the Rocket NVMe 4.0 uses the E16 version. 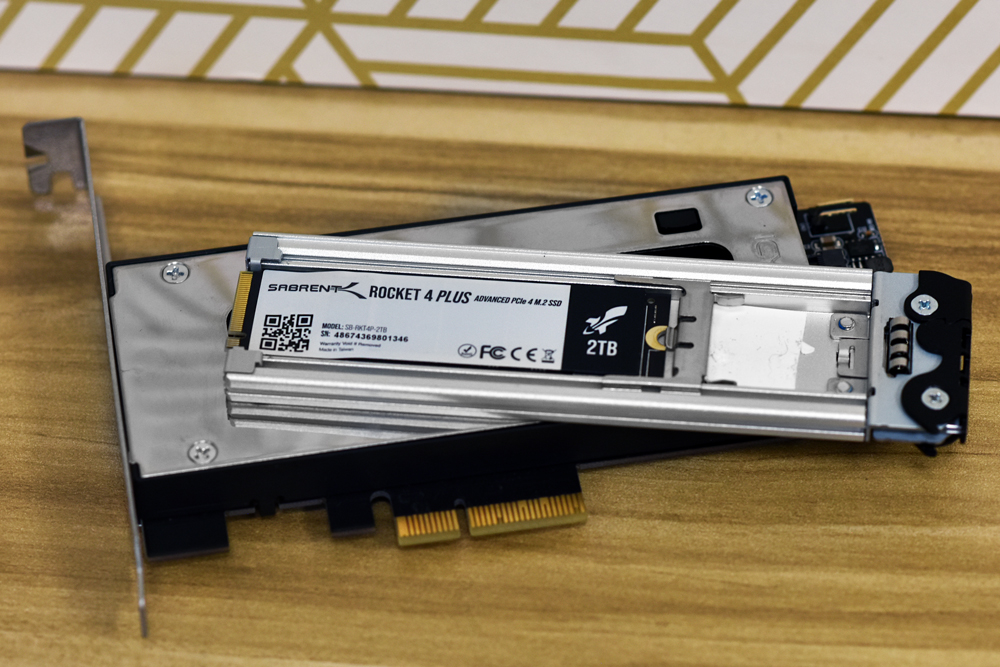 Looking at performance specifics, the Rocket 4 Plus posted some pretty good numbers for a PCIe Gen4 drive. First tested was the SQL Server benchmark. This gave us an average latency of just 3ms, place it near the top of the leaderboard and among some pretty heavy hitters like the Samsung Pro line. In VDBench, the Sabrent drive had peaks of 297,855 IOPS in 4K read, 226,955 IOPS in 4K writes, 4.89GB/s in 64K read, and 1.31GB/s in 64K write. For our VDI benchmarks, the drive hit a peak of 111,447 IOPS in boot, 55,174 IOPS in Initial Login, and 20,361 IOPS in Monday Login. Blackmagic gave us an impressive 5.3GB/s read and 5.9GB/s write.

Like all PCIe Gen4 drives currently on market, performance still hasn’t completely reached its true potential ceiling. Sabrent states a maximum of 7GB/s in sequential reads, and though its performance was impressive, it almost 2GB/s less than this quoted number during our BlackMagic test. Most drives using the PCIe Gen4 interface are more in line with high-end Gen3 consumer-grade drives at the moment, but as we keep saying, we hope to see these numbers increase over the year as support improves. That said, the Rocket 4 Plus’ read speeds are one of the highest we’ve seen in a consumer SSD (even better than the Samsung 980 Pro)

Overall, the Sabrent Rocket 4 Plus is a great drive and is ideal for enthusiasts looking to bring high-performance to their system. Its current price point of $400 for the 2TB model and $300 for the 1TB may dissuade the average buyer. There are other high performing PCIe Gen4 SSDs out there that have a more affordable price tag like the Samsung 980 Pro, which currently goes for around $230 (1TB). Nonetheless, the Rocket 4 Plus offers a good performance profile and as prices fall, is a viable option in the Gen4 space.

Sabrent Rocket 4 Plus on Amazon