The Lexar NM800 Pro is the company’s newest PCIe Gen4 NVMe SSD to hit the market for gamers, professionals, and creators. Powered by 3D TLC NAND and a 12nm INNOGRIT 1G5236CAA controller, the NM800 Pro is available in capacities up to 2TB in the M.2 (2280) form factor.

The Lexar NM800 Pro is the company’s newest PCIe Gen4 NVMe SSD to hit the market for gamers, professionals, and creators. Powered by 3D TLC NAND and a 12nm INNOGRIT 1G5236CAA controller, the NM800 Pro is available in capacities up to 2TB in the M.2 (2280) form factor. 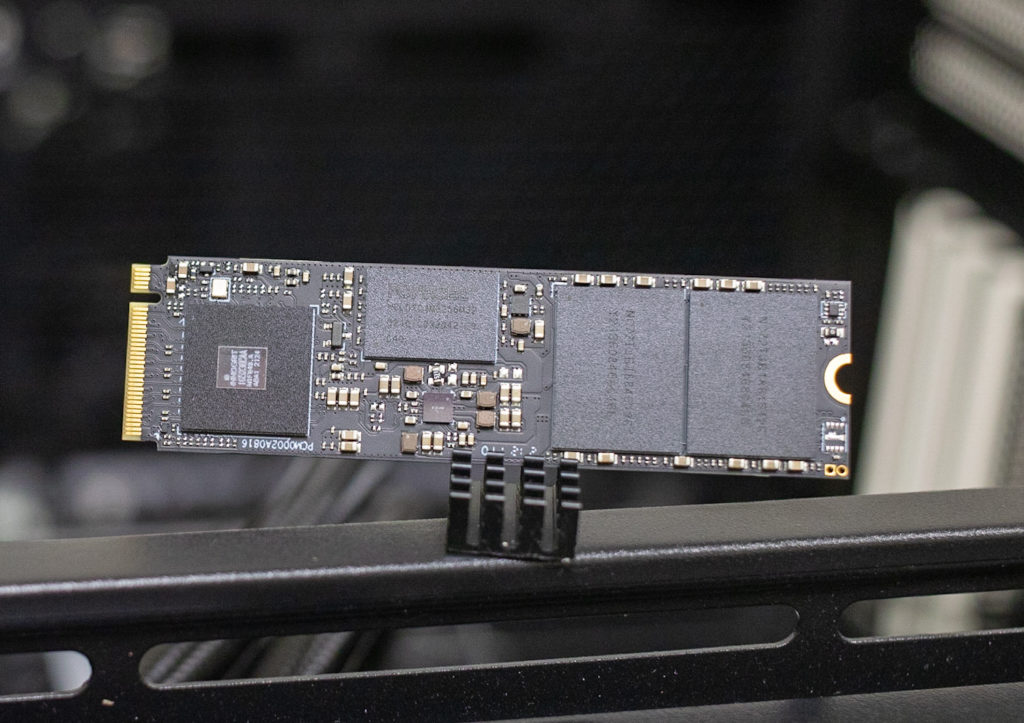 For performance, Lexar quotes the usual speeds for PCIe Gen4 drives, including up to 7.5GB/s read and 6.5GB/s write in sequential transfer rates for the 2TB model. The 1TB version offers slightly slower write speeds of 6.3GB/s while the 512TB is quoted at 7.45GB/s read and 3.5GB/s write.

Looking at reliability, the NM800 Pro is rated at 2,000TB for TWB (total bytes written) and 1.5 million hours MTBF (Mean Time Between Failures), respectively. The latter value is a little less than what we’re used to seeing for consumer drives; for example, the recent Solidigm P41 Plus and WD Black SN850X are rated at 1.6 million hours and 1.75 million hours, respectively. 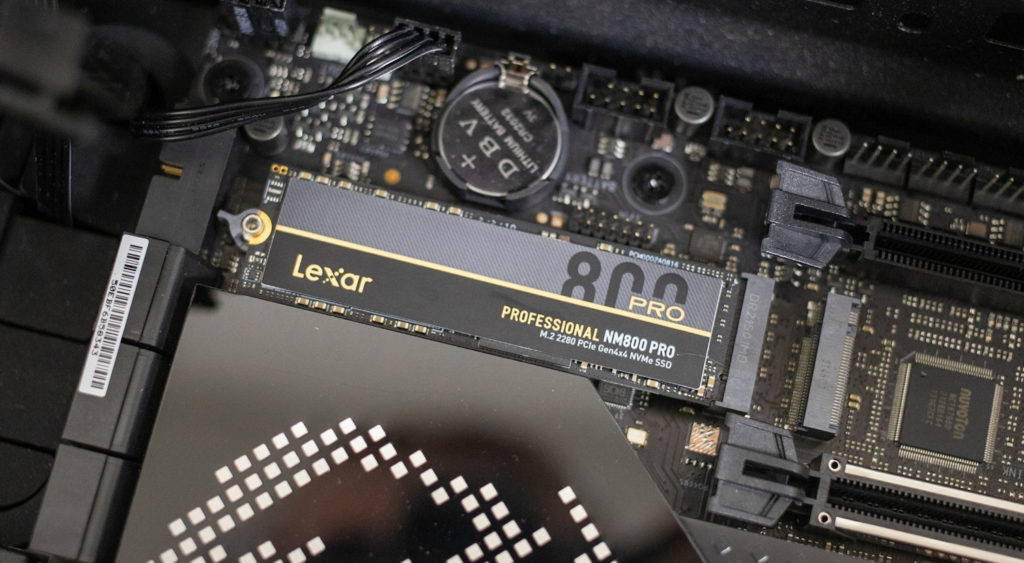 The NM800 Pro also features an integrated heatsink model to reduce thermal issues (Lexar indicates it can reduce temperatures by up to 30%), which can help improve performance consistency and power efficiency during heavy workloads and graphics-intensive gaming. The heatsink is also helpful for use with installations that don’t have a lot of airflow, like installing it inside a Sony PS5, which is supported by this drive.

We didn’t test the heatsink model for our review, so we can’t really comment on whether or not these claims from Lexar are true and if there are any noticeable real-world improvements. Nonetheless, it’s available for those who think they might be pushing the drive to its limits.

We are reviewing the 1TB version of the Lexar NM800 Pro drive and will be comparing it to the following PCIe Gen4x4 drives:

Looking at SQL Server average latency, the Lexar NM800 Pro had an average latency of 6ms, placing near the lower-mid portion of the leaderboard (though still solid). 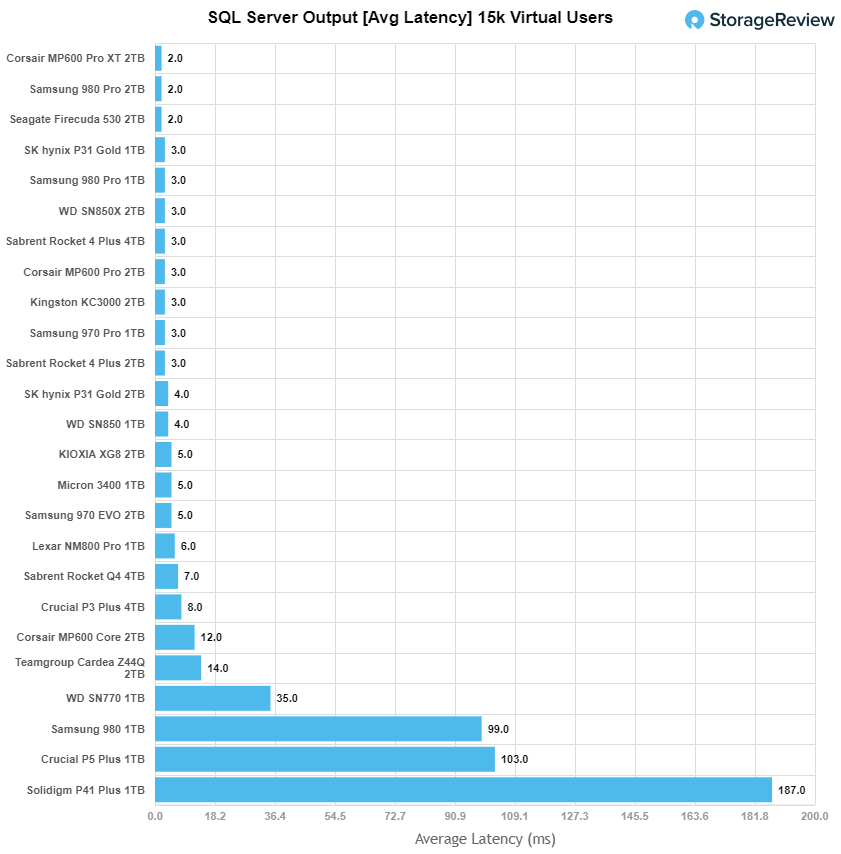 Starting with 4K random read, the Lexar NM800 Pro showed a peak performance of just 437K IOPS at 290.4µs, which placed it near the bottom of the leaderboard and just better than the Micron drive.

Results told a similar story in 4K writes where the Lexar NM800 Pro had a peak performance of 200K IOPS and 633µs (before suffering from a spike), placing it last among the tested drives.

Moving onto sequential read 64K, the Lexar NM800 Pro had much better results, peaking at 5.3GB/s (or 85K IOPS) with 371µs latency, which was among the better performing drives and pretty much identical peak performance to the SK Hynix and KIOXIA drives

In sequential write 64K performance, the Lexar NM800 Pro posted very weak results again (well back from all other tested drives), showing a peak of 903MB/s (or 14K IOPS) at just 1,037µs latency.

Next, we looked at our VDI benchmarks, which are designed to tax the drives even further. These tests include Boot, Initial Login, and Monday Login. Starting with Boot, the Lexar NM800 Pro had a peak of 70k IOPS (at 510.5µs) after which suffered from another spike in performance. This placed it near the bottom of the pack.

Our VDI Initial Login showed some messy results across the board in our charts. It’s difficult to make out, but the Lexar NM800 Pro topped out at 28K IOPS (at 804.6µs) before taking a large spike in performance at the end.

Lastly is our Blackmagic transfer speed test, where we measure transfer speeds inside our consumer test platform. Here the Lexar NM800 Pro measured 5,340MB/s read and 5,467MB/s write. While these were fairly good results, they still weren’t as good as other consumer-grade PCIe Gen4 drives like the WD Black SN850X, which posted up to 5.77GB/s read and 6.01GB/s write. 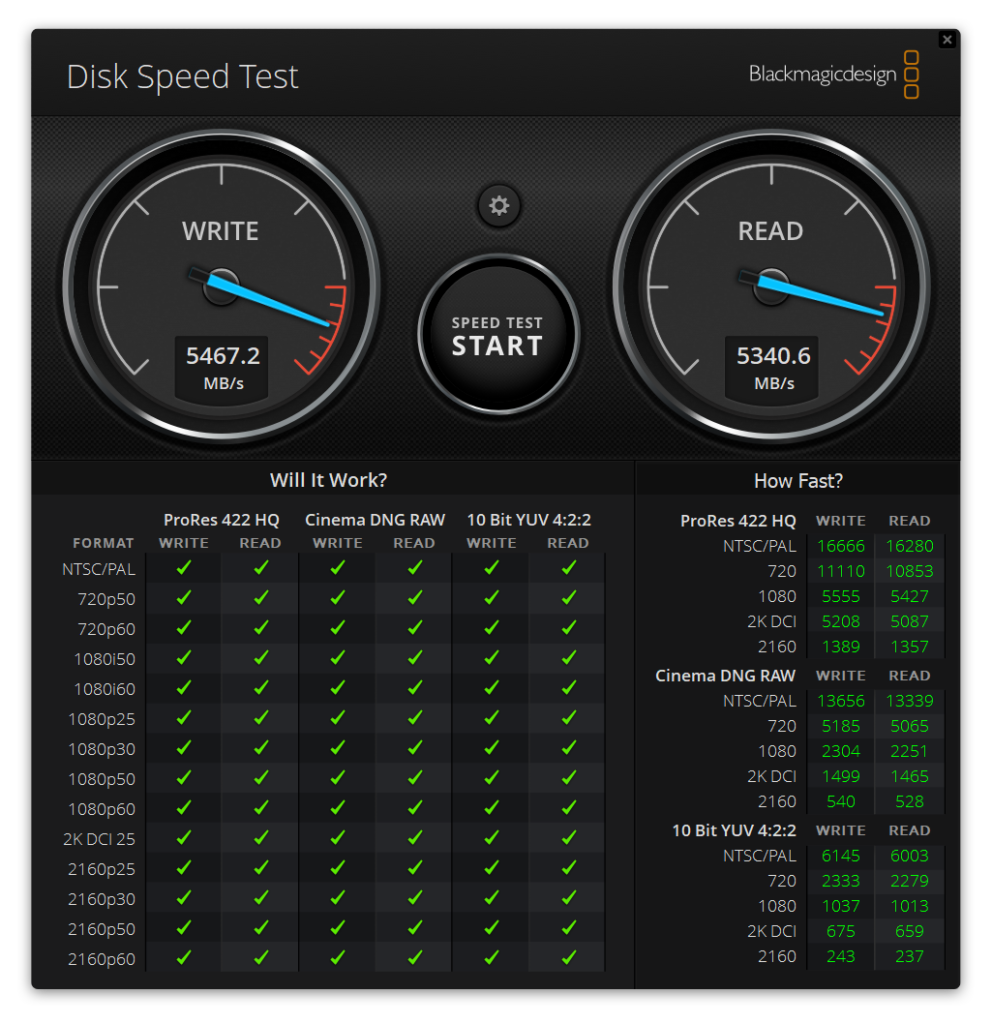 The Lexar NM800 Pro is a PCIe Gen4 SSD designed for a range of demanding consumer use cases (like gaming and creation); however, it had a very uneven showing during our benchmarking, which makes us question whether it’s a suitable solution for these applications. The NM800 Pro is available in capacities up to 2TB and features 3D TLC NAND, PS5 compatibility, as well as a rating of 2,000TB and 1.5 million hours for TBW and MTBF, respectively. 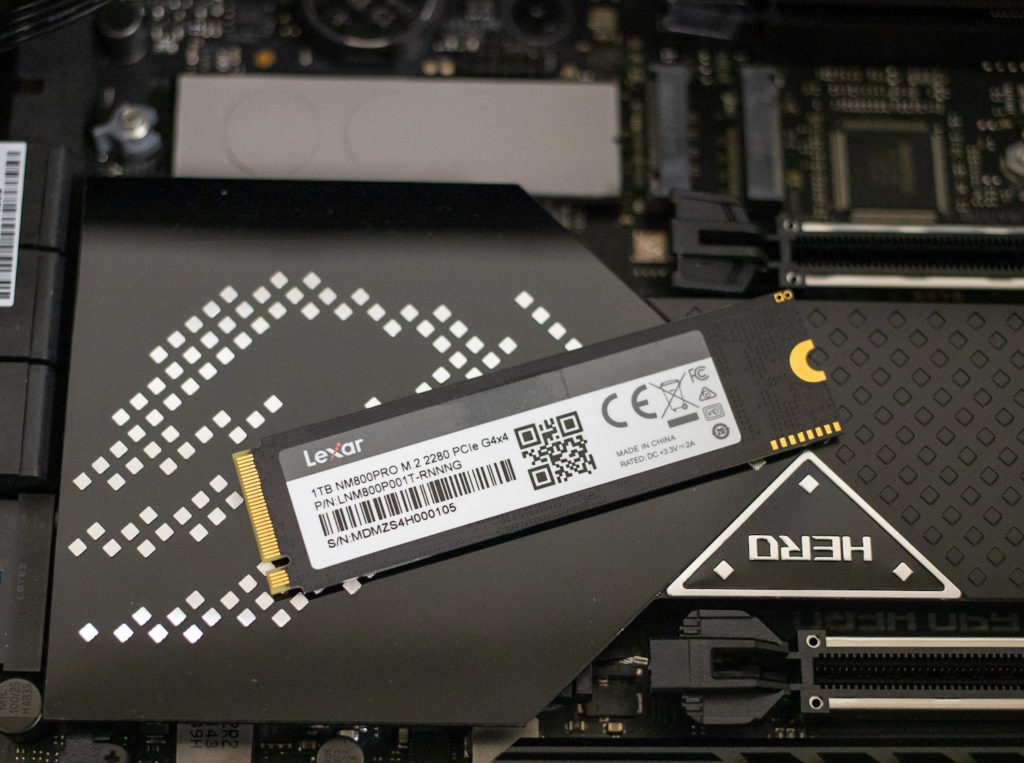 The NM800 Pro yielded disappointing results during our performance tests, often finding itself near the bottom part of the leaderboard among the other tested TLC-based SSDs. Specifics include 437K IOPS in 4K random reads, 200K IOPS in 4K random writes, and 5.3GB/s (or 85K IOPS) in sequential reads. It couldn’t crack the 1GB/s mark for sequential write performance, only peaking at 903MB/s (or 14K IOPS). It did, however, show decent results in SQL server performance, posting 6ms in average latency.

Its poor performance continued during our VDI benchmarks (our suite of tests that tax the drives even further): our Boot profile showed a peak of 70K IOPS, while initial and Monday login tests topped out at just 28K IOPS and 17K IOPS, respectively.

While the NM800 Pro does feature a 2TB version with an integrated heatsink and heat spreader, not much else sets this drive apart from the other PCIe Gen4 drives out there. If it was noticeably cheaper than other competing drives, the Lexar NM800 Pro might be a viable option for the budget-minded consumer; however, its pricing model of $100, $170, and $280 for the 512GB, 1TB, and 2TB, respectively, is certainly not ideal due to its lackluster performance.

This is more expensive than other TLC SSDs like the WD SN850X, SK hynix P41 and Samsung 980 Pro, all of which are superior drives in almost every way. So, unless Lexar significantly drives down the MSRP price tag, we can’t recommend the NM800 Pro, especially since they are positioning it as a performance-driven SSD for gamers and content creators.