Micron Technology has released the Micron 9400 NVMe enterprise SSD which boasts a storage capacity of up to 30.72TB with TLC NAND. It’s a PCIe Gen4 data center U.3 drive, and provides consistently low latency at all capacity points. Its high capacity doubles Micron’s previous TLC SSD, meaning enterprises can store the same amount of data in half as many servers. Or customers can keep just as many servers and more than double their data footprint.

Micron Technology has released the Micron 9400 NVMe enterprise SSD which boasts a storage capacity of up to 30.72TB with TLC NAND. It’s a PCIe Gen4 data center U.3 drive, and provides consistently low latency at all capacity points. Its high capacity doubles Micron’s previous TLC SSD, meaning enterprises can store the same amount of data in half as many servers. Or customers can keep just as many servers and more than double their data footprint. 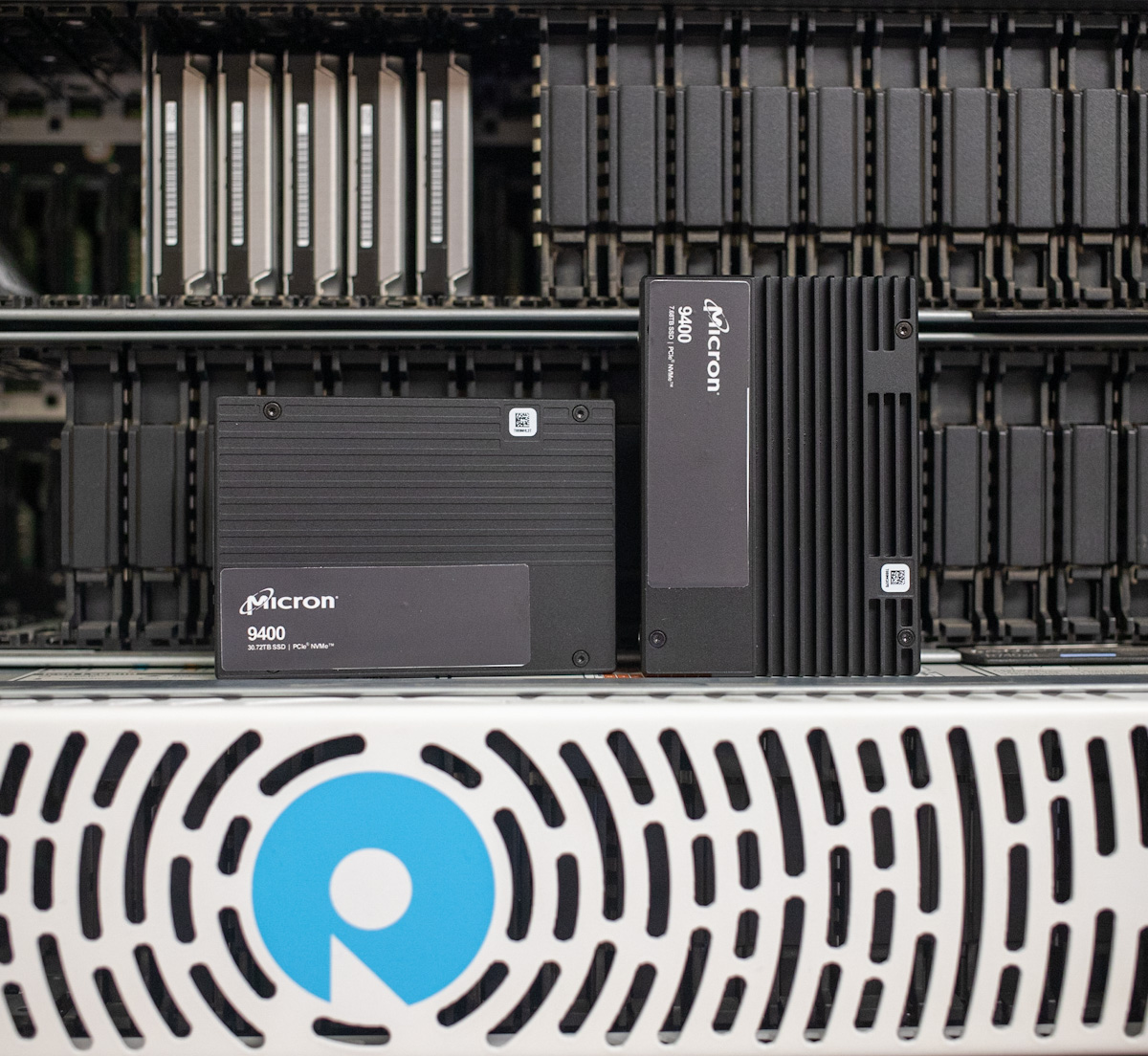 A standard 2U server with 24 bays can now support nearly 3/4 of a petabyte in a single system. This was certainly possible before, but that’s with QLC flash. Micron’s been able to put together the 9400 with TLC NAND, meaning the performance profile should be the star, especially in scenarios with heavier write activity. That said, these will cost more than the QLC alternative, so it’s important to fit the drive to the workload. 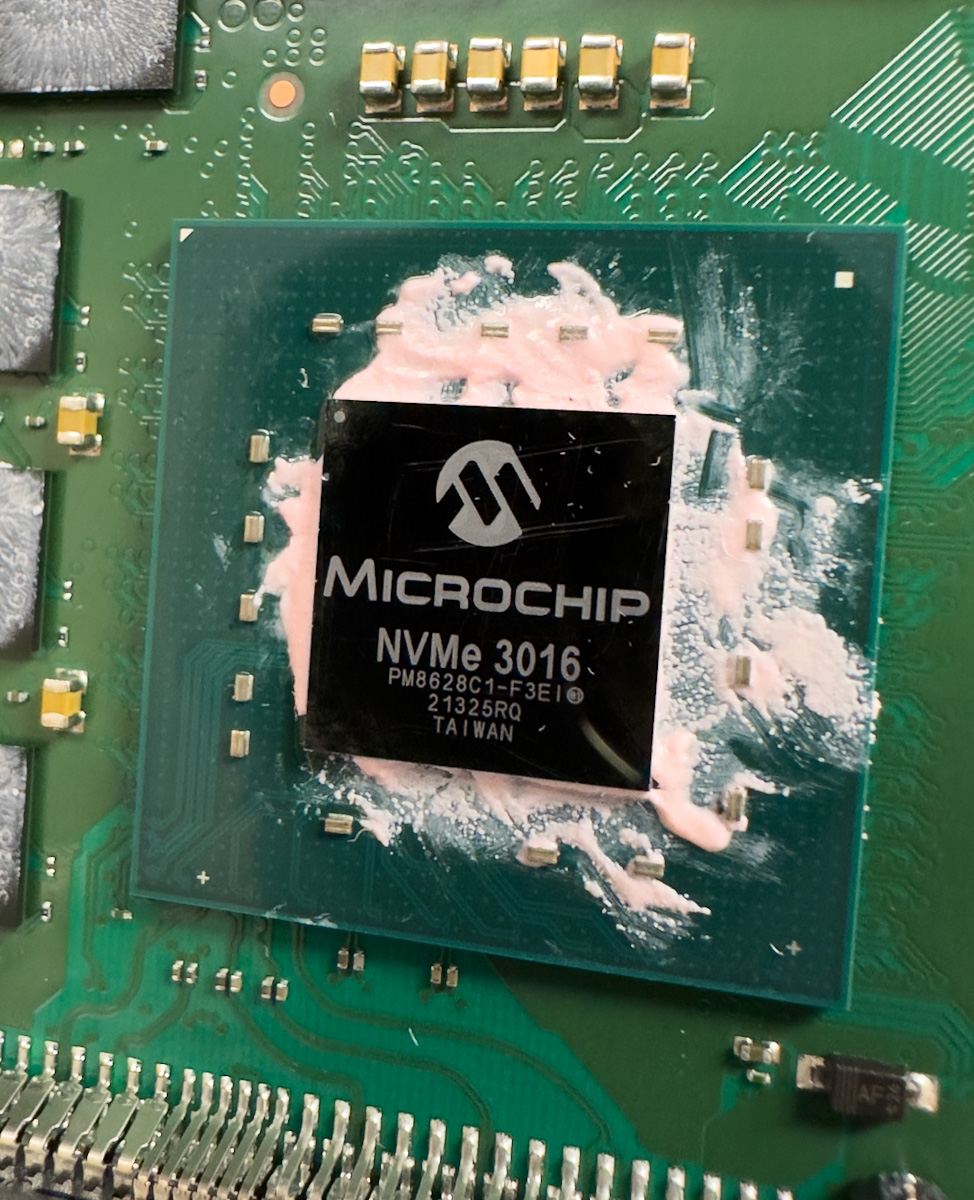 Speaking of performance, the Micron 9400 also offers impressive spec sheet data, delivering 1.6 million IOPS for 100% 4K random reads and over a million IOPS in mixed workloads. At its heart is a Microchip NVMe 3016 controller. It’s also designed for real-world applications, with testing showing superior performance in scenarios such as the RocksDB storage database and the Aerospike Database. 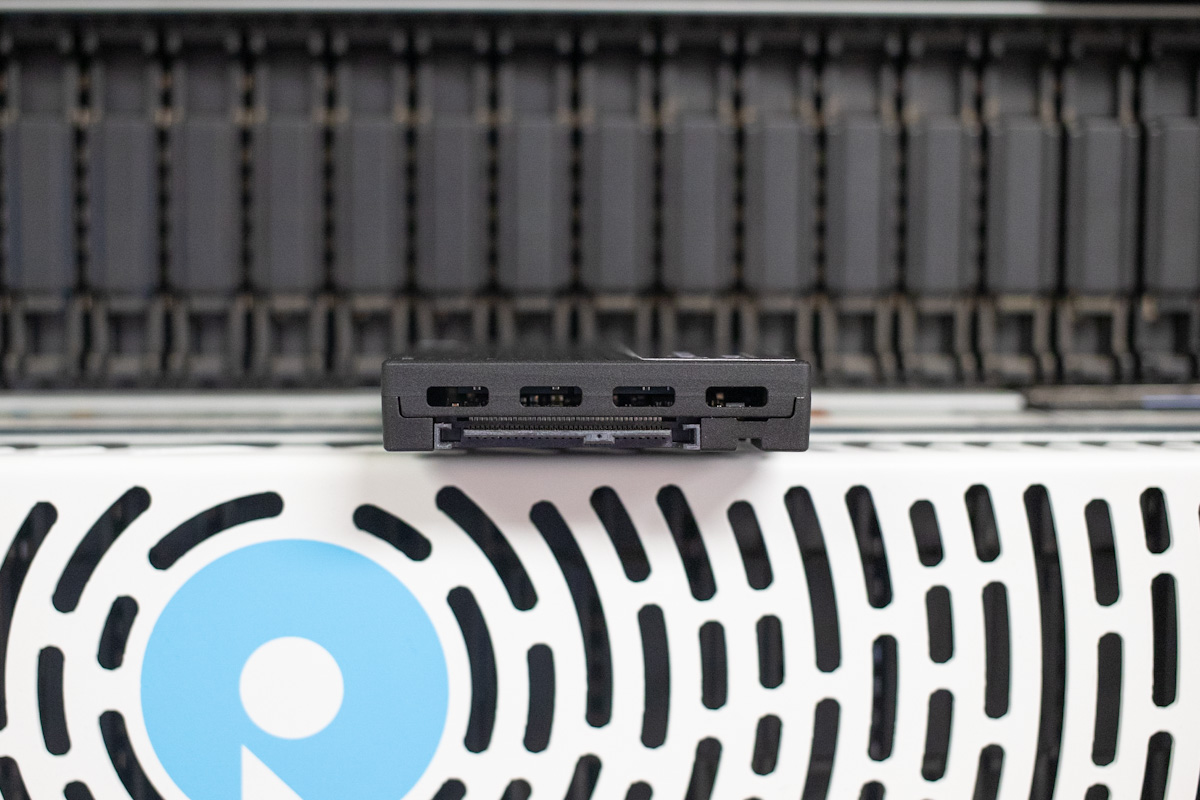 Another side benefit of these large capacity SSDs is around environmental impact. Because the power consumed isn’t a lot different, larger SSDs can provide more efficiency throughout the system. According to Micron, the 9400 SSDs are “77% better IOPS per watt” which reduces power consumption and therefore operational expenses, carbon footprint, and environmental impact. 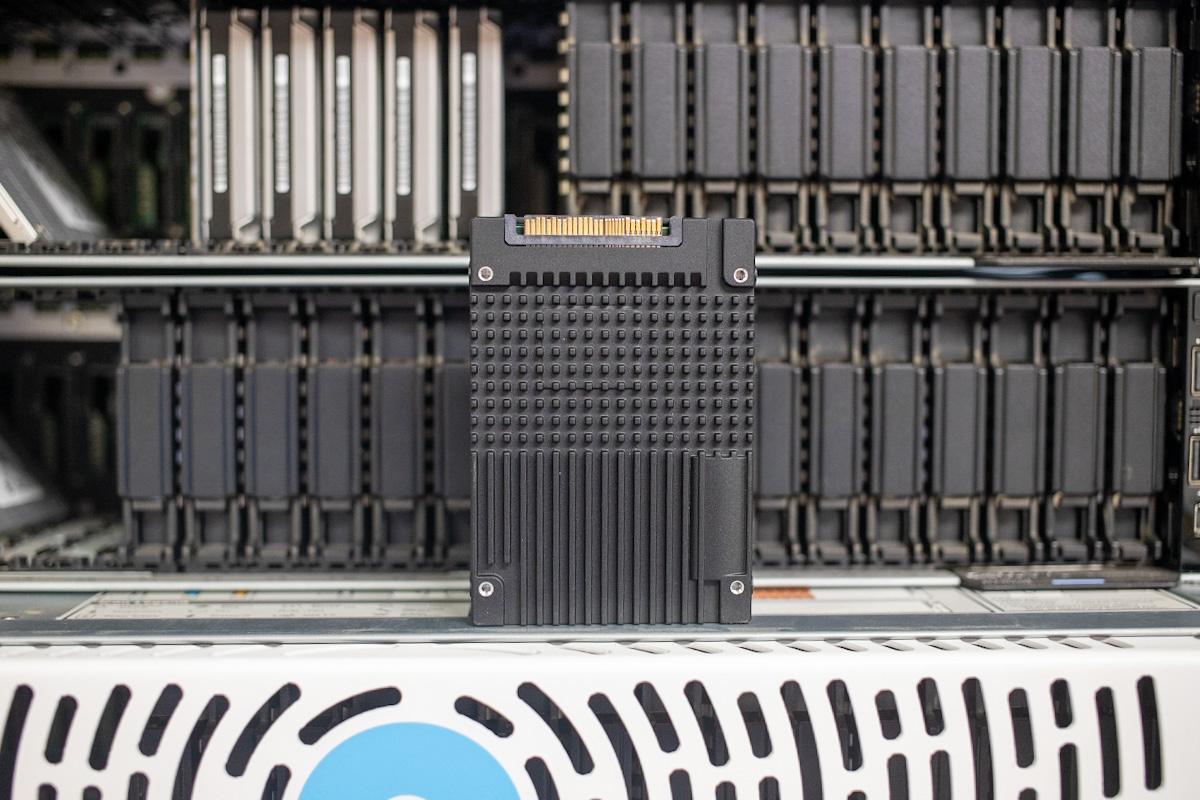 The Micron 9400 is available in a U.3 form factor in a range of capacities. Micron further differentiates between their PRO line which is single drive write per day and the Max line, which trades capacity for a higher 3 DWPD endurance.

We incorporate these details about the lab environment and protocols into reviews so that IT professionals and those responsible for storage acquisition can understand the conditions under which we have achieved the following results. None of our reviews are paid for or overseen by the manufacturer of the equipment we are testing. Additional details about the StorageReview Enterprise Test Lab and an overview of its networking capabilities are available on those respective pages.

For our SQL Server transactional benchmark, the Micron 9400 Pro placed in the middle of the pack with a solid 12,650.1 TPS.

Looking at our Sysbench transactional benchmark, the Micron 9400  Pro was the best-performing drive with 11,615 TPS.

All of these tests leverage the common vdBench workload generator, with a scripting engine to automate and capture results over a large compute testing cluster. This allows us to repeat the same workloads across a wide range of storage devices, including flash arrays and individual storage devices. Our testing process for these benchmarks fills the entire drive surface with data, and then partitions a drive section equal to 25% of the drive capacity to simulate how the drive might respond to application workloads. This is different from full entropy tests which use 100% of the drive and takes them into a steady state. As a result, these figures will reflect higher-sustained write speeds.

In our first VDBench Workload Analysis, random 4K read, the Micron 9400 had a solid peak performance of 1.49 million IOPS at a latency of 343µs for the 7.68TB model (the 30.72TB model was just slightly behind with 1.48 million IOPS). This was good enough for 2nd place, though still well back of the Daptustor drive.

Switching over to 64k sequential workloads, the 9400 fell back to second place (behind the Dapustor drive again) in 64K write, peaking at 6.9GB/s (110K IOPS) with a latency of 576.3µs. The small capacity model was again not far behind with 6.8GB/s.

Next up is our 16K sequential performance, where the new Micron drive continued to perform well. In reads, the best performing capacity was the 7.68TB model, which posted 4.3GB/s (275K IOPS) 113µs in latency.

In SQL 90-10, the performance of both capacities was virtually identical, with the 30.72TB model showing slightly better results: peaking at 334K IOPS with 94.3µs, right behind the Dapustor again.

Next, we switched over to our VDI clone test, Full and Linked, where the 9400 continued its great performance. For VDI Full Clone (FC) Boot, the 30.72TB recorded the best performance of the two capacities, peaking at 286K IOPS with a latency of 119.7µs.

While the larger capacity fell back in the pack for the first time during VDI FC Initial Login, the 7.68TB model was the best-performing drive alongside the Dapustor. Here, it peaked at 180K IOPS with a latency of 162.8µs.

For VDI Linked Clone (LC) Boot, the 9400 showed similar performance for both capacities, with the 7.68TB model with slightly better results: it peaked at 127K IOPS with 123.3µs.

For VDI LC Monday Login, the 7.68TB model was by far the best of the two capacities, peaking at 88K IOPS with a latency of 178µs. This placed it 2nd overall.

The Micron 9400 Pro is a performance-driven data center U.3 SSD that features TLC NAND, PCIe Gen4 interface, consistent low latency, and models up to 30.72TB. This capacity potential allows enterprises to store the same amount of data in half as many servers (compared to Micron’s 7450 top capacity), or to keep the same number of servers while more than doubling their storage pool. Moreover, because power consumption is similar to previous generations, the larger-capacity Micron 9400 Pro models provide more efficiency per IOP throughout a data center. 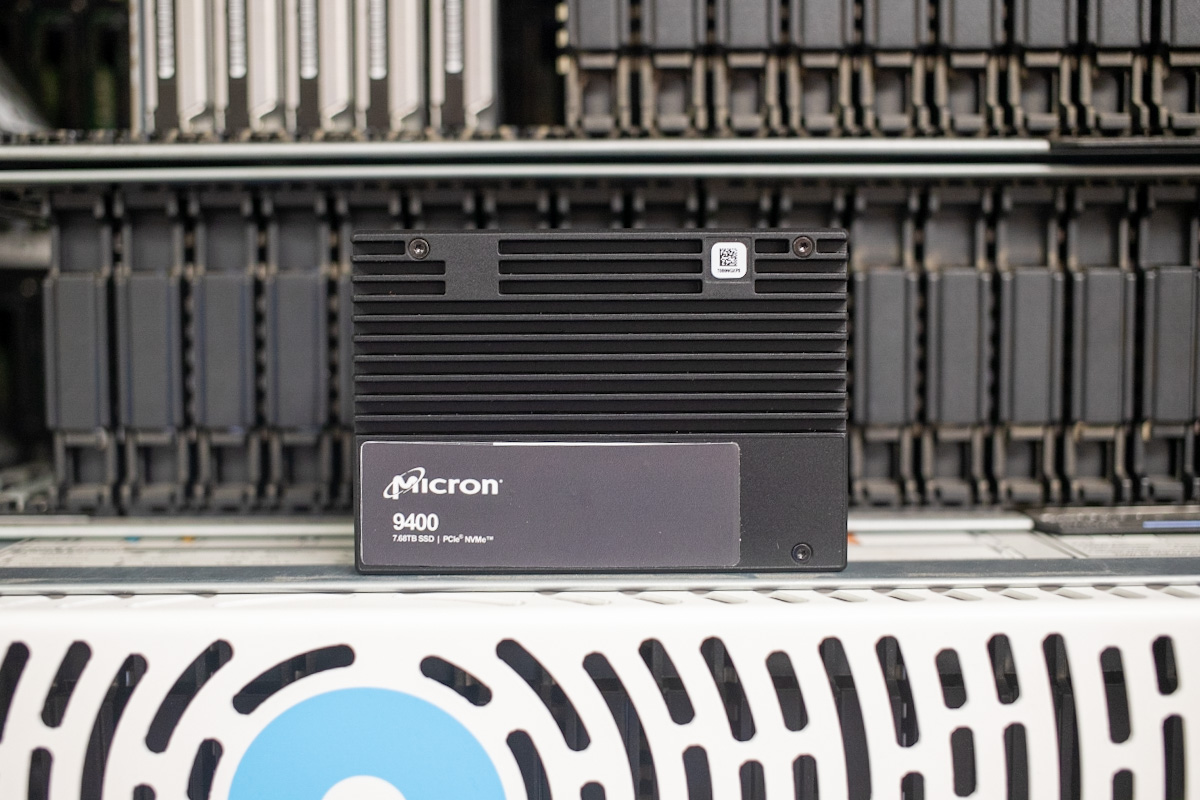 In terms of performance, the Micron 9400  shows some impressive numbers, including 1.6 million IOPS for 100% 4K random reads and over a million IOPS in mixed workloads. After we put it through our gauntlet of tests, it certainly did not disappoint, as it often found itself at the top of the leaderboard.

Overall, the Micron 9400 Pro had an impressive overall showing and comes in a massive 30.72TB capacity with TLC NAND. The drives are a great choice for real-world applications and did well overall in our testing. This line only comes in U.3, so Micron opted to not include EDSFF this time around. That probably doesn’t matter a lot in a Gen4 product though, as traditional server slots are going to be predominantly U.2/U.3 until E3.S takes over in Gen5 servers in the coming months. What may be the last Gen4 enterprise drive from the company is very strong though and worthy of consideration, especially at that 30.72TB capacity should your organization have such a need.