The Seagate IronWolf 525 is the company’s newest NVMe NAS SSD to hit the market. Offering fast access to data in low latency, multi-user environments, the IronWolf 525 is ideal for commercial and entry-level Enterprise NAS solutions as well as creative professionals with high-performance needs. Seagate’s new NAS drive is available in three capacities (500GB, 1TB, and 2TB) and can be used either as a primary storage drive or as a fast-caching option.

The Seagate IronWolf 525 is the company’s newest NVMe NAS SSD to hit the market. Offering fast access to data in low latency, multi-user environments, the IronWolf 525 is ideal for commercial and entry-level Enterprise NAS solutions as well as creative professionals with high-performance needs. Seagate’s new NAS drive is available in three capacities (500GB, 1TB, and 2TB) and can be used either as a primary storage drive or as a fast-caching option. 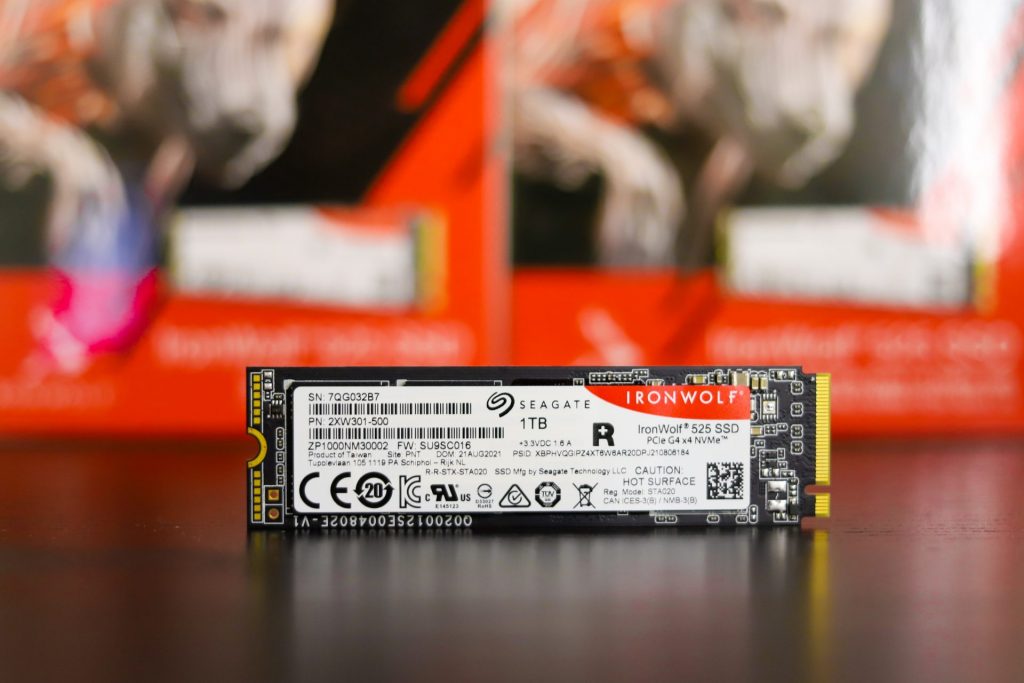 Compared to its predecessor, the IronWolf 510, Seagate’s new IronWolf 525 is quoted with better performance (both sequential and random speeds) though its TBW (total bytes written) and power efficiency are a little less. Both drives have the same Mean Time Between Failures (MTBF) rating of 1.8 million hours. 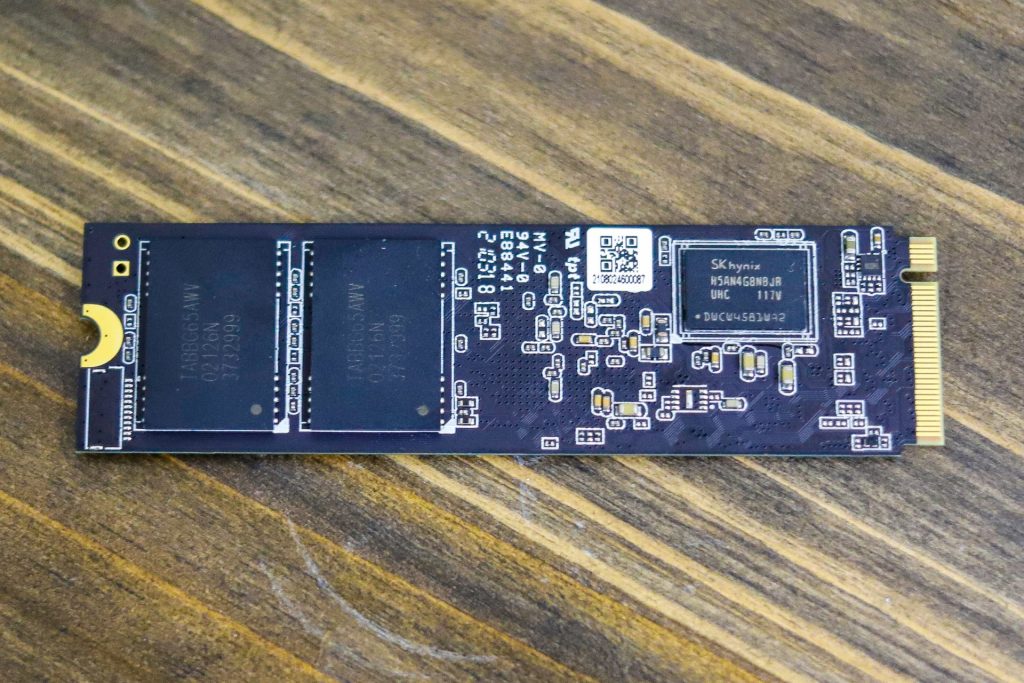 All this said, Seagate went with an older controller (Phison E16) with the IronWolf 525 rather than the new E18 model, which is used by their flagship FireCuda 530 drive.  This makes the IronWolf 525 more in line with the FireCuda 520. The older E16 is used in drives such as the Corsair MP600 and Sabrent Rocket and is combined with two Kioxia BiCS4 96-layer 3D (TABBG65AWV) flash chips.

Western Digital also recently released their own NVMe NAS SSD, the WD Red SN700. Like the IronWolf 525, this is a high-endurance, caching drive designed for SMB customers in 24/7 NAS environments and always-on applications. There are some differences between the two, however. While companies like Western Digital are still using the Gen3 interface, Seagate has made the jump to Gen4, allowing it to potentially leverage all of the high-performance benefits that come with it.

The IronWolf 525 drive (2TB model) has slightly better reliability numbers versus the SN700, quoting an MTBF rating of 1.8 million hours (vs. 1.75 million hours) and a higher endurance at 2,800 TBW (vs. 2,600 TBW). The WD SN700 line, however, offers a higher-capacity 4TB model, as the Seagate drive only goes up to 2TB. This can be a deal-breaker for businesses looking to get the most high-speed storage footprint from their NAS. 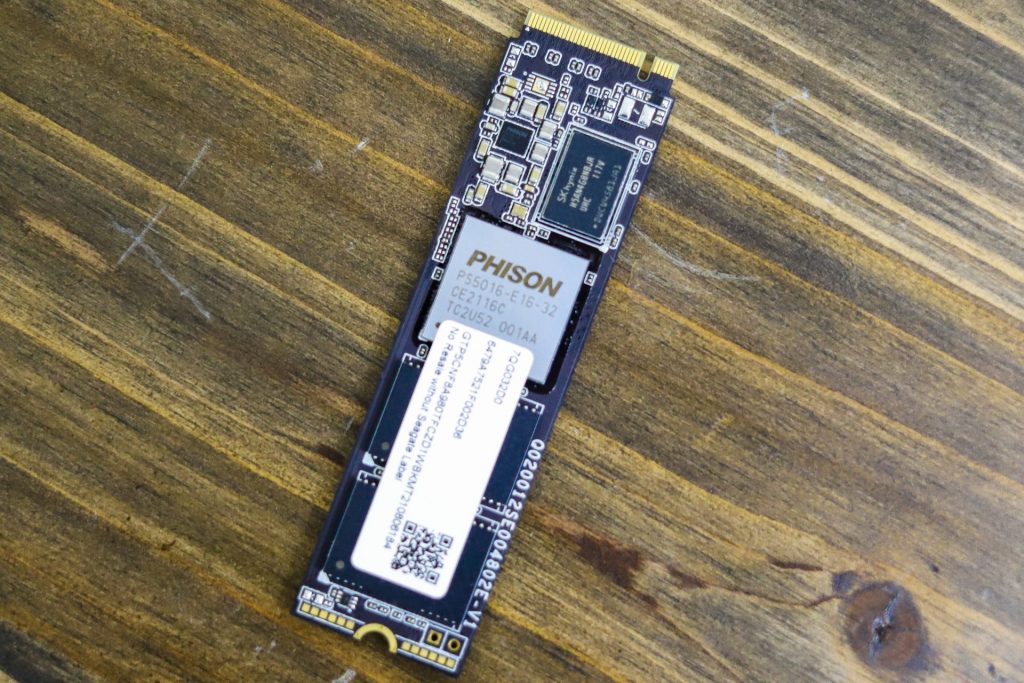 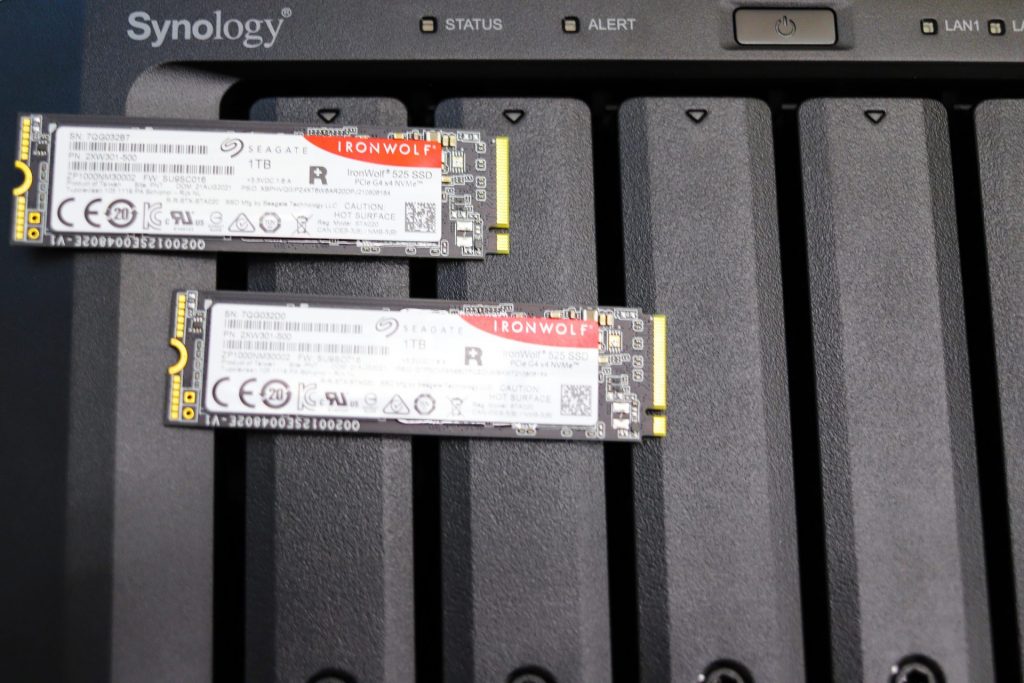 First up is our random 4K read. Here, the Seagate IronWolf 525 SSD peaked at 396,247 IOPS with a latency of 321.3µs, which placed it 2nd overall though well back of the Samsung drive.

In 4K write, the Seagate started with very low latency (like all the tested drives) then went on to peak at just over 57,784 IOPS with a latency at about 2,208µs.

Switching over to sequential workloads, the new Seagate drive performed much better. Here, the IronWolf 525 had sub-millisecond latency performance throughout with a peak of boasted peaks of 59,499 IOPS (3.74GB/s) and 536.7µs latency, placing it first by a large margin.

Next, we move on to our SQL workloads, where all drives (including the Seagate IronWolf 525) were well behind the Samsung DCT983. That said, the IronWolf 525 SSD stayed below 1ms throughout with a peak of 123,829 IOPS with a latency of 257.2µs latency in the SQL workload. The Samsung drive had over 200K in IOPS performance and 150 µs in latency for comparison.

For SQL 90-10 the Seagate peaked at 100,370 IOPS with a latency of 313.7µs. Again, the Samsung drive outperformed the other drives by far, more than doubling the IOPS of Synology and Seagate IronWolf 510 SSDs.

Moving on to Oracle workloads, the Seagate IronWolf 525 continued its sub-millisecond latency throughout the tests. For the Oracle Workload profile, we saw a peak performance of 69,567 IOPS at 535.4µs.

Oracle 90-10 saw the IronWolf 525 hit 86,292 IOPS at 253.7µs. The Samsung once again encroaching on double the IOPS and boasting half the latency of the new Seagate drive.

Next, we switched over to our VDI clone test, Full and Linked. For VDI Full Clone Boot, the Seagate IronWolf 525 SSD peaked at 80,655 IOPS at a latency of 419µs before just slightly dropping off.

VDI FC Initial Login saw the Seagate IronWolf 525 actually outperform the Samsung, though it showed a severe spike in performance at the end of the test, peaking at 19,409 IOPS at 1.5ms. The IronWolf 510 model had better results here with a peak of 22,260 IOPS at 1,300 µs.

Switching over to Linked Clone, the Seagate IronWolf 525 fell way back down the leaderboard (last place by a large margin) peaking at 24,389 IOPS with a latency of 252.7µs.

Like we saw in the VDI Full Clone test, the IronWolf 525 performed much better when we switched to Initial Login (though it barely edged out the IronWolf 510). Here, it had peak scores of 11,044 IOPS with 720µs for latency.

Finally, with VDI LC Monday Login, the Seagate showed some huge dips in performance though ending with a peak performance of 12,223 IOPS and a latency of 1,298 µs.

The Seagate IronWolf 525 is an M.2 Gen4 NVMe SSD built for both NAS caching and primary storage use cases. Available in capacities from 500GB to 2TB, the new Seagate drive offers plenty of endurance (2,800 TBW) and is quoted to reach sequential speeds up to 5GB/s read and 4.4GB/s write. 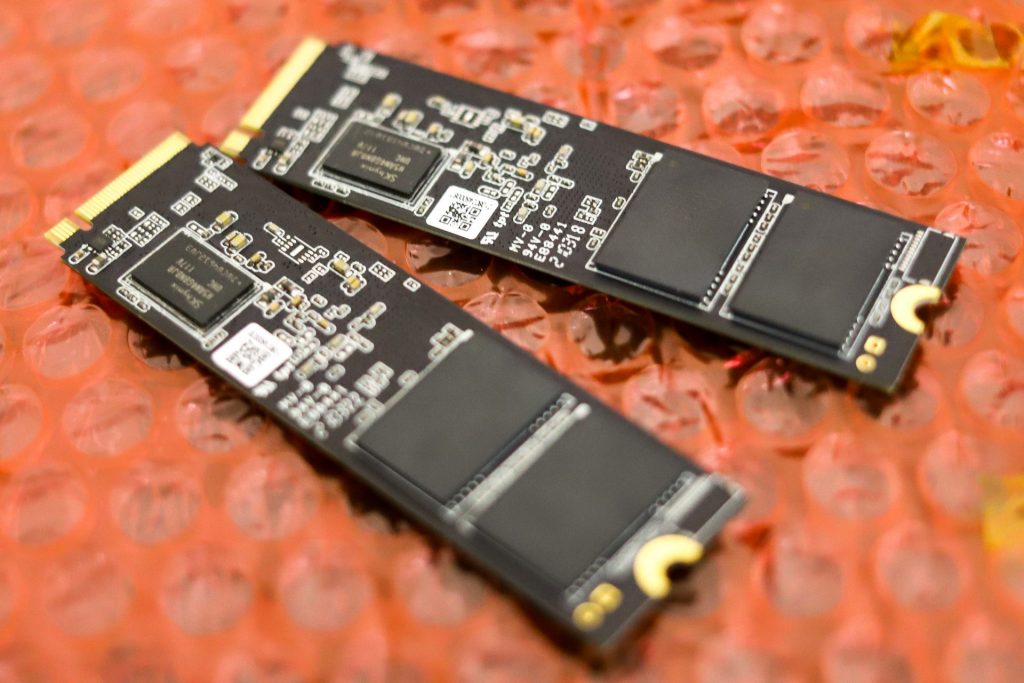 Looking at performance, we compared the Seagate IronWolf 525 (.7DWPD) to other similar SSDs: the Synology SVN3400, Samsung DCT983, and its predecessor, the IronWolf 510 (1DWPD). With the exception of a few tests, the Samsung drive topped the leaderboard by a noticeable margin, though this is due to its more up-market enterprise design (.8DWPD). Though the IronWolf 525 showed strong random read performance in our 64k test, it was outpaced in every other benchmark by some of the Gen3 drives in many of the tests. 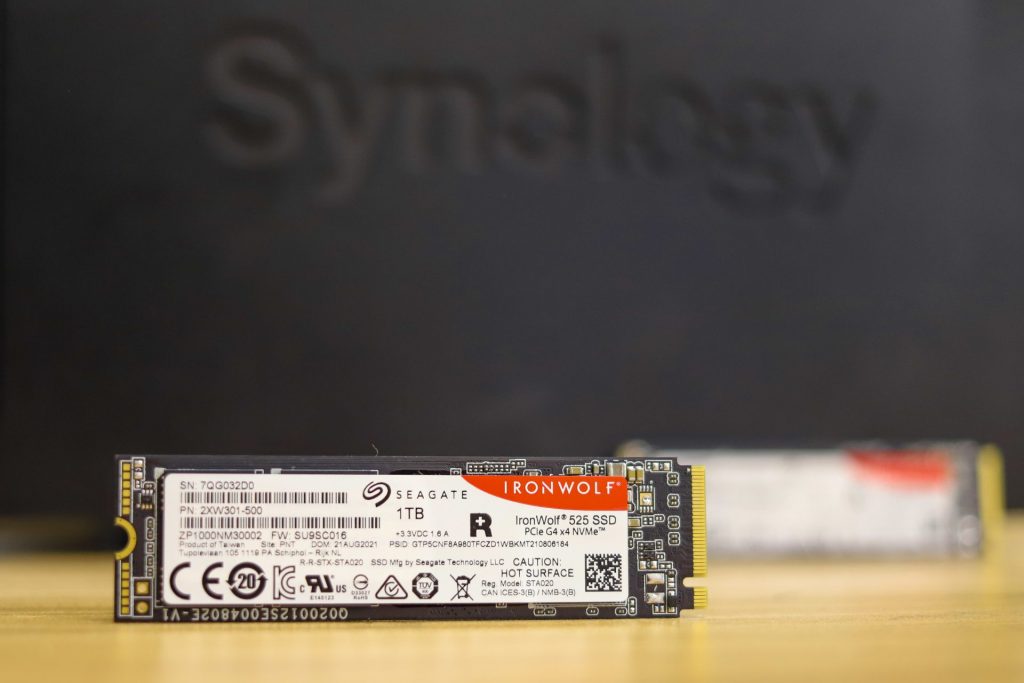 Though Gen4 performance from this Seagate offering isn’t anything special, the IronWolf 525 is one of the few NAS drives that leverage the new PCIe interface. That said, Gen4 support on NAS devices themselves is pretty rare at the moment, making the IronWolf 525 a somewhat niche (and unique) offering for the time being.

For example, QNAP is only now in the process of upgrading a single NAS, the TS-h2490FU (a 2U rackmount NAS), to support the PCIe Gen4 NVMe interface with an expected release by the end of Q4 2021. Synology has no plans to support Gen4 on any models in the near term.

This is a bizarre release for Seagate. After the really great FireCuda 530 launch, this one is a tremendous letdown. Seagate took an old controller (July 2019) that isn’t very good by today’s standards and released a NAS caching drive (high write workload) with a lower endurance rating than the model prior. Performance is subpar, the drive is on the expensive side and there are few ports within the NAS world that even support Gen4. There are better options out there, this drive should be a hard pass unless it’s much less expensive than other choices.