Inspur is one of the world’s largest server vendors. They also have their own storage solutions, of which we’re looking at the NS8500 G2 SSD. This enterprise-grade Gen4 drive uses 112-layer eTLC NAND and Inspur’s own firmware. The drive is aimed at I/O-intense applications requiring low latency.

Inspur is one of the world’s largest server vendors. They also have their own storage solutions, of which we’re looking at the NS8500 G2 SSD. This enterprise-grade Gen4 drive uses 112-layer eTLC NAND and Inspur’s own firmware. The drive is aimed at I/O-intense applications requiring low latency. 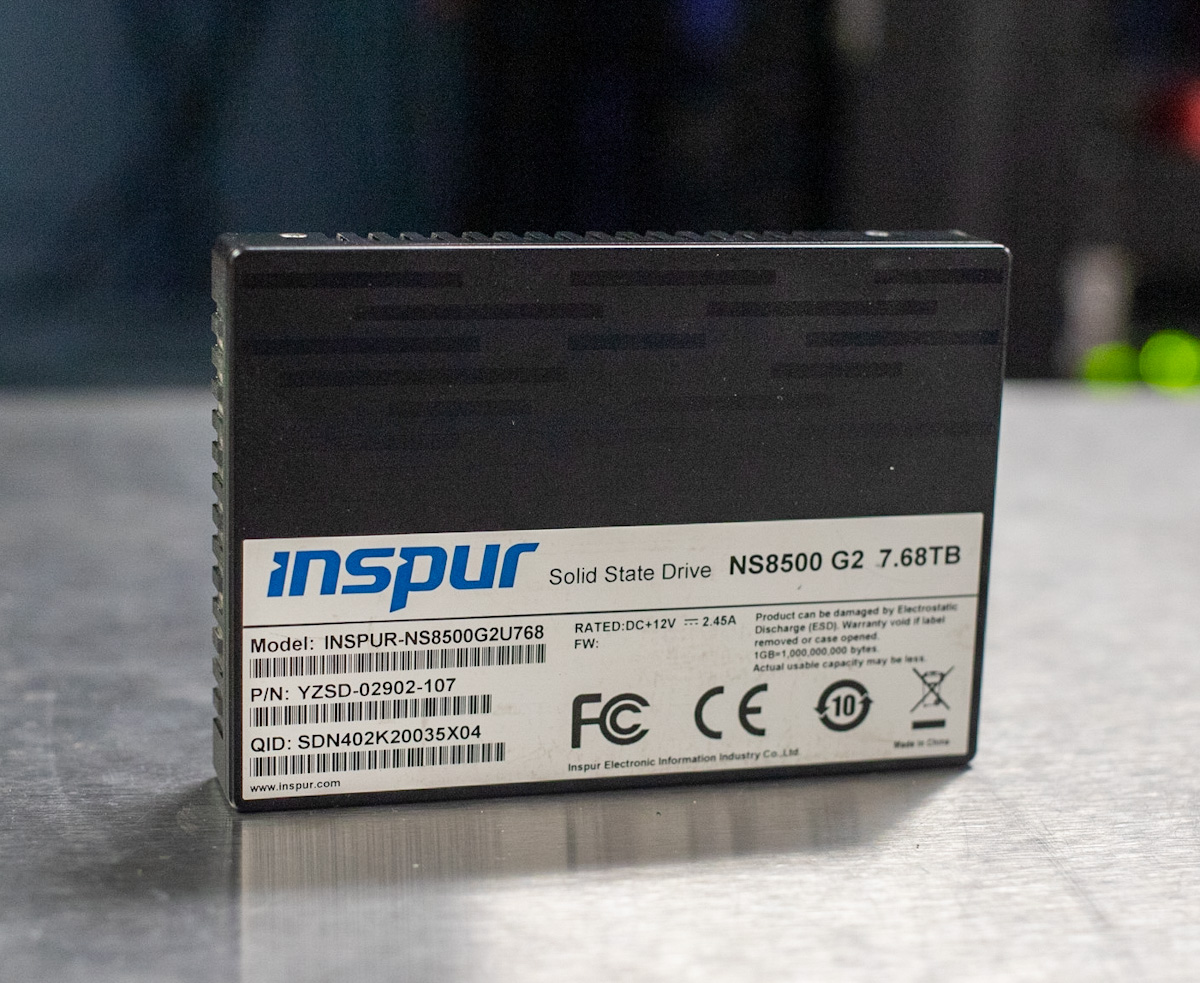 We looked at a batch of the NS8500 G2 SSDs in our Inspur NF5280M6 Server with NS8500 G2 SSDs Performance Report. That article is worth a click for a thorough background on what Inspur offers in this space, especially since we tested the drive (actually, 12 of them) inside one of their servers, but the most important storage-specific details will be repeated below. 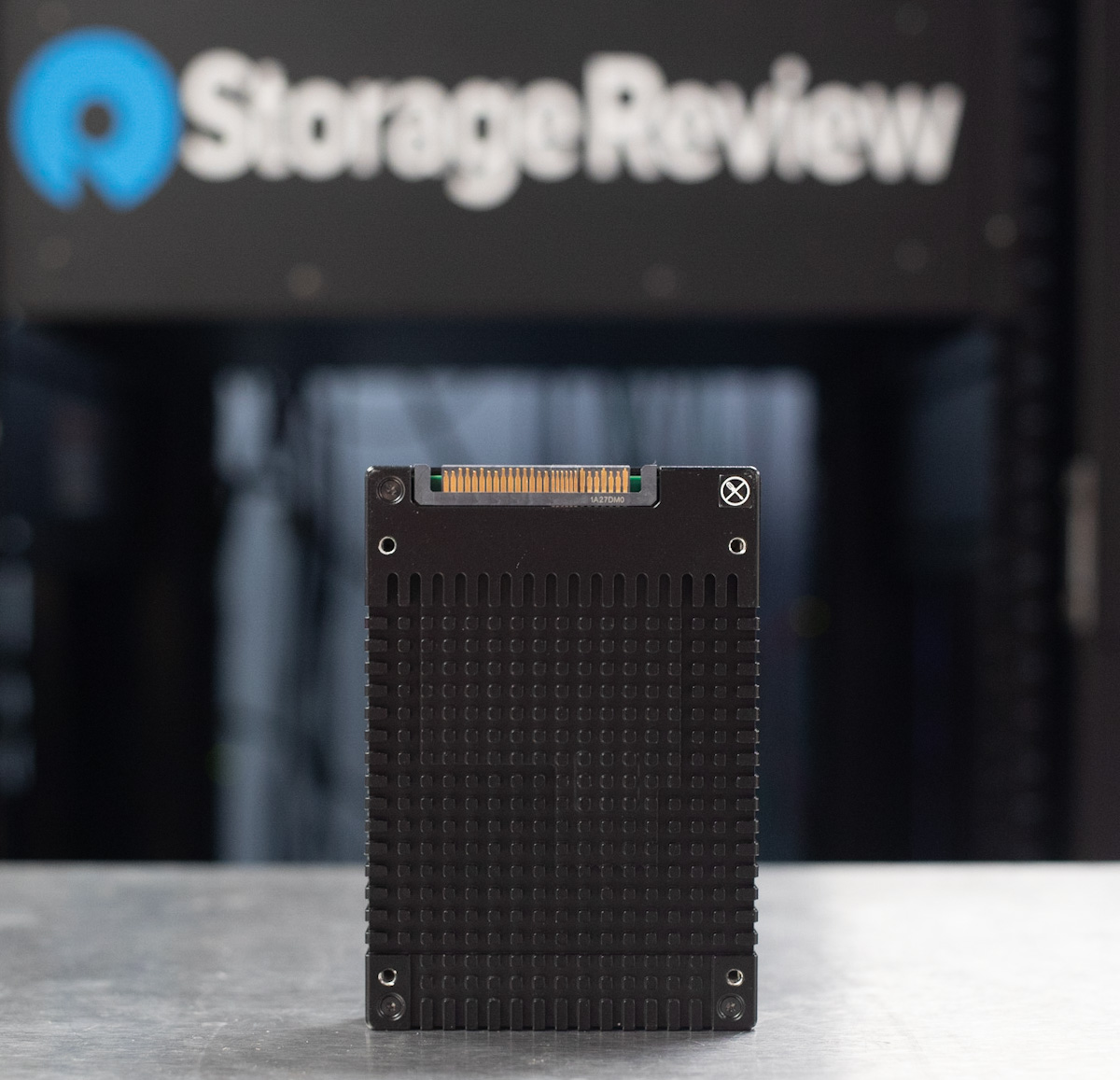 Inspur says its second-generation controller in the NS8500 G2 has twice the performance of the first generation, with up to 7GB/s read and 5GB/s write. As noted, this drive uses 112-layer eTLC NAND and a Gen4 interface, so it should be ideal for most enterprise workloads.

We incorporate these details about the lab environment and protocols into reviews so that IT professionals and those responsible for storage acquisition can understand the conditions under which we have achieved the following results. None of our reviews are paid for or overseen by the manufacturer of the equipment we are testing. Additional details about the StorageReview Enterprise Test Lab and an overview of its networking capabilities are available on those respective pages.

The NS8500 G2 started with 12,648.6 TPS in our SQL Server transactional benchmark, placing it about mid-pack in this tight group.

Next is SQL Server average latency, where the NS8500 G2 made another mid-pack showing, only beating the Intel P5510 and the Samsung PM1735.

All of these tests leverage the common vdBench workload generator, with a scripting engine to automate and capture results over a large compute testing cluster. This allows us to repeat the same workloads across a wide range of storage devices, including flash arrays and individual storage devices. Our testing process for these benchmarks fills the entire drive surface with data, and then partitions a drive section equal to 25% of the drive capacity to simulate how the drive might respond to application workloads. This is different from full entropy tests which use 100% of the drive and takes them into a steady state. As a result, these figures will reflect higher-sustained write speeds.

The NS8500 G2 redeemed itself in sequential write 16K, achieving 184,492 IOPS at just 82.3µs without a major latency spike or instability as many of the other drives showed. The Dapustor R5100 took a back seat in this test, too.

Now for our Oracle tests, starting with Oracle Workload. Several of the drives showed minor instability, but not the rock solid NS8500 G2! It reliably finished mid-pack, with a final number of 273,976 IOPS at 128µs.

Our final series of tests are VDI full clone (FC) and linked clone (LC). We start with VDI FC boot, where the NS8500 G2 showed a nice steady line through the middle of this group. Its top number was 223,972 IOPS at 153µs. There continued to be no catching the Micron 9400 Pro or the Dapustor R5100.

The crazy-looking graph for VDI FC Initial Login is the norm for this test. The NS8500 G2 took an early latency spike before calming down and hitting 153,709 IOPS at 191µs, which wasn’t too far off the Micron 9400 Pro and the Dapustor R5100.

The squiggly lines got worse in the tougher VDI FC Monday Login test. The NS8500 G2 stayed about where it was relative to the other drives, and finished at 97,505 IOPS at 161µs. The Memblaze 6920 just edged it out.

The VDI Linked Clone (LC) tests are next. Consistency is the NS8500 G2’s mantra, and it doesn’t disappoint, with a steady line that ends at 86,813 IOPS at 183µs. In a rare moment, the Kioxia CD6 did better, but its line started with a big spike where the NS8500 G2 showed none.

The Inspur NS8500 G2 proved itself as a solid, reliable performer throughout our enterprise benchmarks. It’s not in the same performance league as the Micron 9400 Pro and the Dapustor R5100, but its middle-of-the-pack performance didn’t disappoint. It maintained stable performance in our Oracle database and VDI Full Clone tests where our comparison drives, including the Kioxia CD6 and even the Micron 9400 Pro, tended to show some instability. Stability and predictability are the NS8500 G2’s calling cards.

The Memblaze 6920 performs similarly to the NS8500 G2, though its performance isn’t as consistent. As noted, the Micron 9400 Pro and the Dapustor R5100 are both superior performers, but unless you’re continuously running your servers at maximum, the NS8500 G2 is a worthy alternative, especially if you’re using Inspur servers and thus taking advantage of vertical integration for price savings.