The Patriot Viper VP4300 is the company’s newest PCIe Gen4 drive to hit the market meant to offer reliability across data-heavy tasks. The M.2 (2280 form factor) NVMe drive is marketed as a gaming SSD, as it is fully compatible with the Sony PlayStation 5 and features a slick-looking design. Available in capacities of 1TB and 2TB, the VP4300 is powered by an Innogrit Rainier IG5236 controller.

The Patriot Viper VP4300 is the company’s newest PCIe Gen4 drive to hit the market meant to offer reliability across data-heavy tasks. The M.2 (2280 form factor) NVMe drive is marketed as a gaming SSD, as it is fully compatible with the Sony PlayStation 5 and features a slick-looking design. Available in capacities of 1TB and 2TB, the VP4300 is powered by an Innogrit Rainier IG5236 controller. 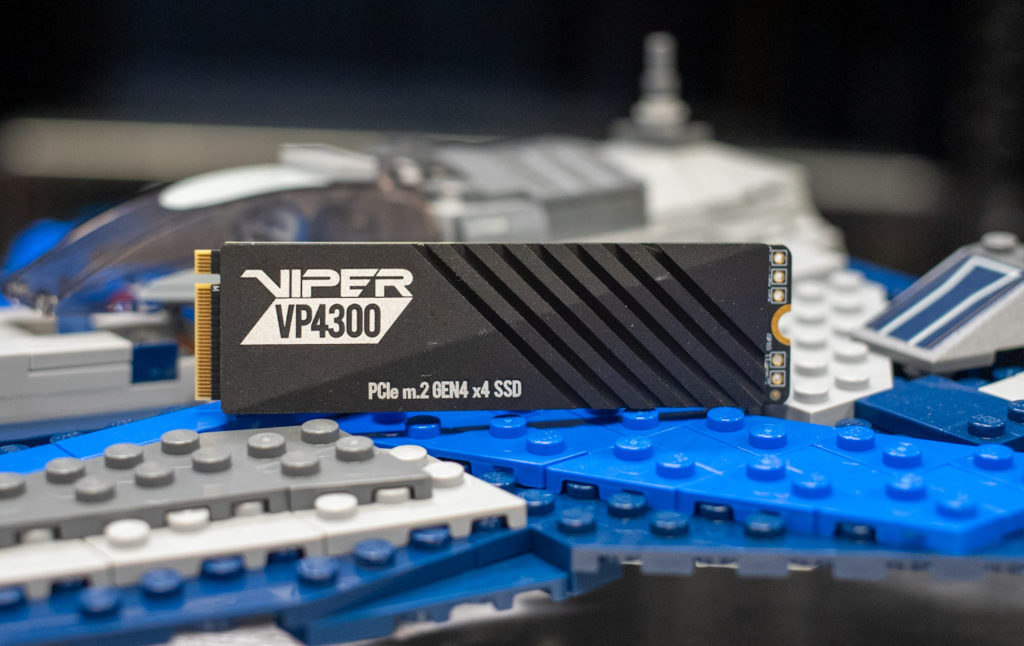 Released back in 2019, the IG5236 controller leverages 8 NAND channels and is built with high security and data protection to support high-end client (and even data center) solutions. We saw the exact same controller inside the XPG GAMMIX S70.

Performance-wise, the “Rainier” controller was initially quoted to reach up to 7GB/s and 6.1G/s in sequential reads and writes, and over 1 million IOPs random read performance. Rainier also provides a comprehensive data protection scheme through SRAM ECC and end-to-end data path protection and supports all major 2D and 3D flash memories, at a maximum capacity of 16TB.

As for the specifics of VP4300’s quoted performance, it is expected to reach up to 7,400MB/s read and 6,800MB/s write for sequential speeds. These numbers are in the upper echelon of quoted numbers for similarly classed drives, so it will be interesting to see if it comes close to these. Patriot also claims up to 800,000 IOPS for both reads and writes in 4K performance. 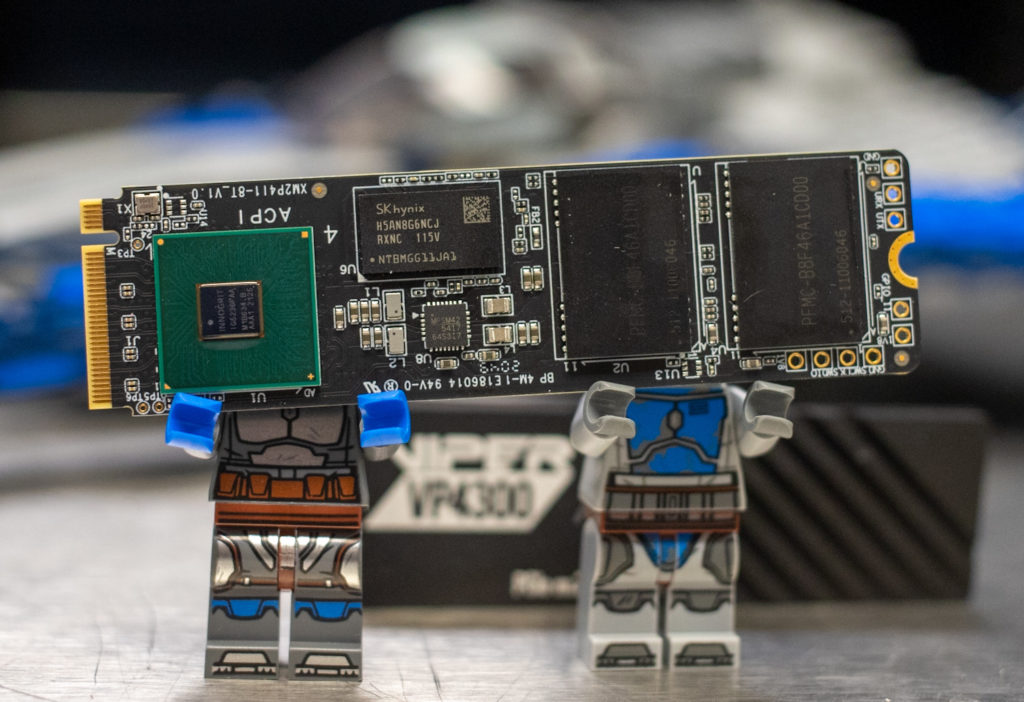 The VP4300 is also specced with a 2-million TBW rating, which is on the higher end of what we’ve seen with similarly-classed drives. The SK hynix P41 and Samsung 980 Pro, for example, are both rated at 1.5 million TBW. It also features AES 256-bit hardware encryption.

Users will have the choice between two new, low-profile heatshields. The first is an asymmetric aluminum heatshield, which gives it a unique, design-savvy look. We had to install this ourselves by peeling off the protective film from the aluminum headshield, aligning it to the edges of the SSD (so that the logo is next to the M.2-pin connector, but not over the top of it), and placing it on the SSD.

The other option is a one-time-use graphene heatshield, which helps ensure thermal dissipation and avoid overheating in tightly packed spaces. This is also installed manually; however, all you need to do is peel off the protective film and place it on the drive.

For this review, we used the aluminum heatshield, which displays the company branding, product name, and drive interface. 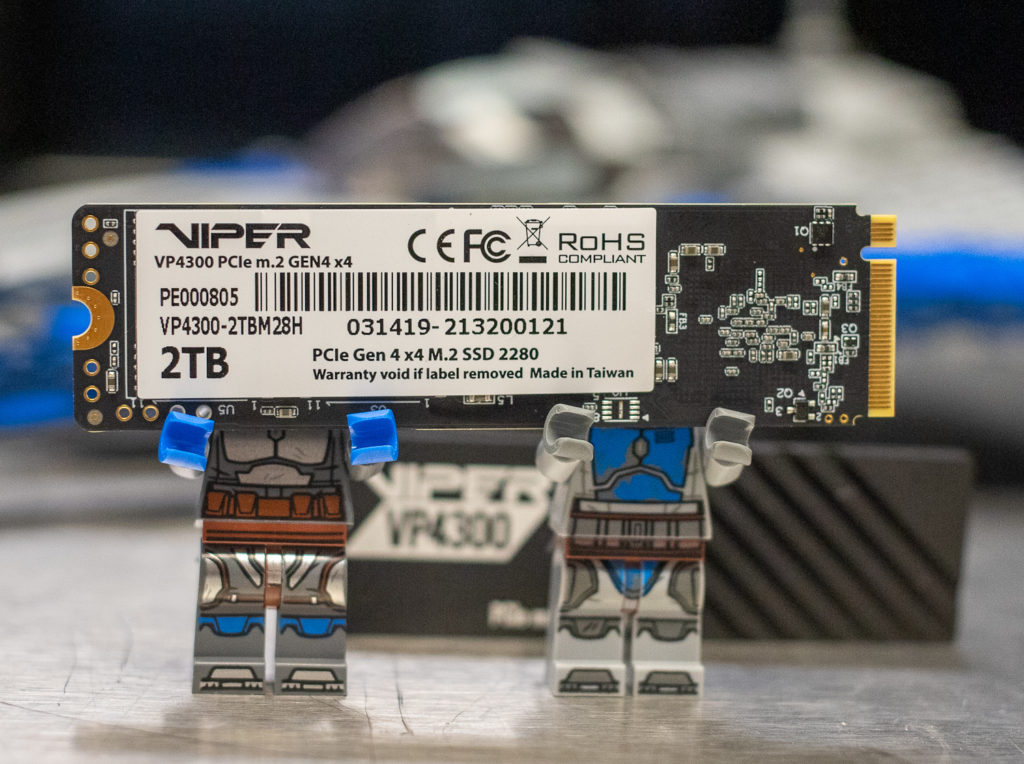 On the backside, you get more detailed information about the drive, including capacity, form factor, certifications, and serial numbers.

We are reviewing the 2TB version of the Patriot Viper VP4300 drive and will be comparing it to the following PCIe Gen4x4 drives:

Starting with SQL average latency, the VP4300 posted 4ms, which placed it in the middle part of the consumer NVMe SSD leaderboard. 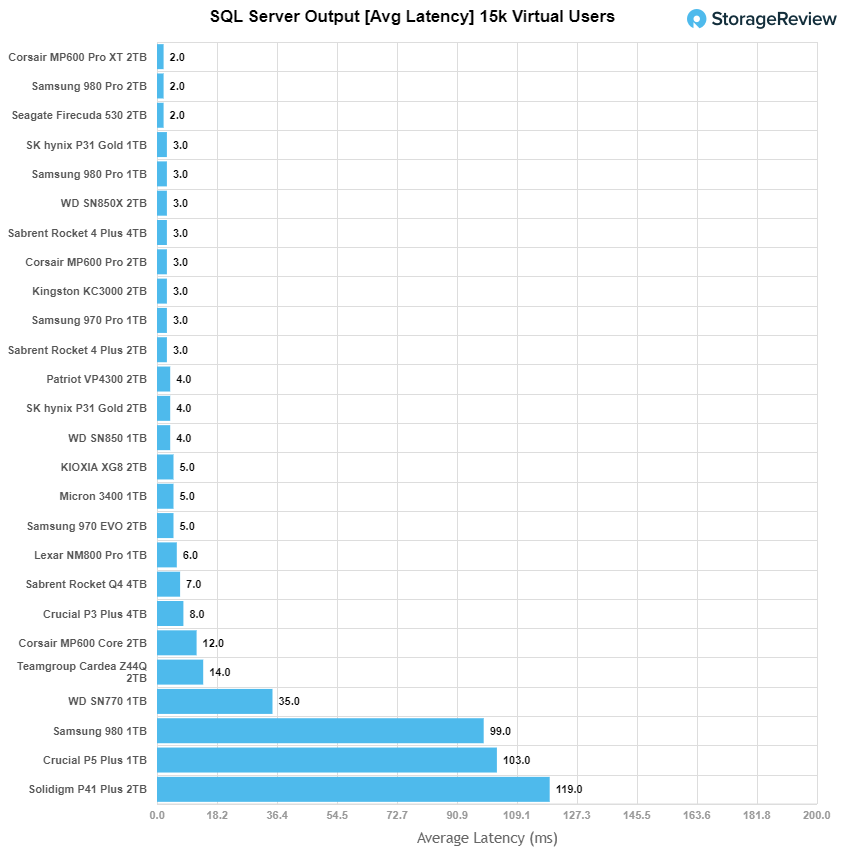 For 4K random write, VP4300 latency posted mid-range results again (or 5th place), peaking at 365K IOPS and 343.1ms (though it had a pretty noticeable spike at the end).

In 64K sequential writes, the VP4300 showed solid performance again, posting a peak score of 30K IOPS or 1.89GB/s at a latency of 520.5µs. This was slightly better than the Sabrent Rocket 4 Plus (for 2nd place), though it had much higher latency by the end of the test.

Next, we looked at our VDI benchmarks, which are designed to tax the drives even further. These tests include Boot, Initial Login, and Monday Login. Starting with Boot, the VP4300 had a peak of 112K IOPS with a latency of 286.5µs, though it ended with slightly slower numbers at the end.

Our VDI Initial Login produced some messy results in our charts, as usual. The VP4300 had a peak of 37,383 IOPS with a latency of 304.7µs, though it ended at 33K IOPS at 902 µs. These were mid-tier results compared to the other tested SSDs.

Finally, VDI Monday Login (where results were hard to decipher once again) saw the VP4300 peak at 28K IOPS (near the back of the pack) with a latency of 190.4µs before showing a noticeable dip at the very end.

We measured performance inside a Windows 11 environment on our consumer test platform. Here, the VP4300 was able to reach 5.13GB/s read and 5.83GB/s write. 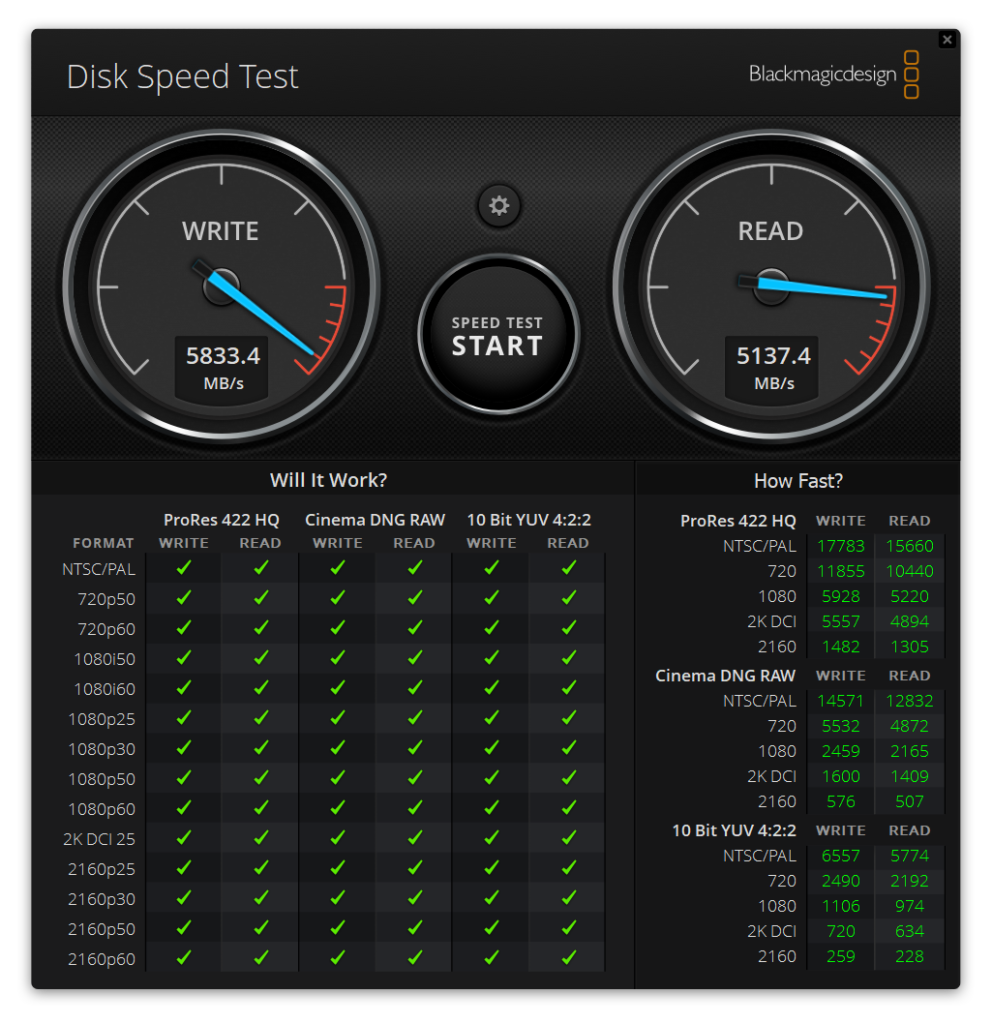 The Patriot VP4300 is the company’s newest addition to their Viper line of gaming SSDs, featuring the PCIe Gen4 interface, M.2 (2280) form factor, an Innogrit Rainier IG5236 controller, and capacities of 1TB and 2TB.  In addition to its support for the PlayStation 5, it also comes in a unique, premium design that we really liked. 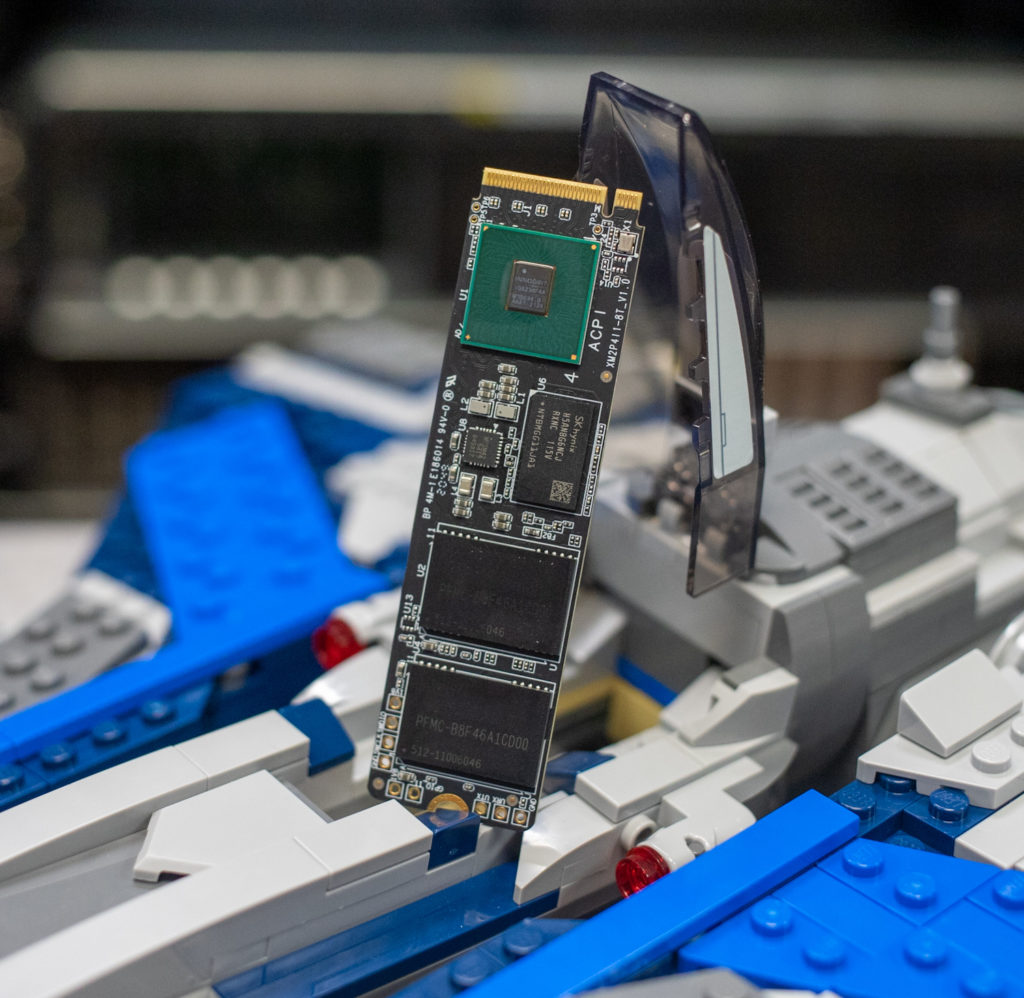 While performance results were a bit inconsistent during most of our benchmarking (mostly mid to lower-tier results), the VP4300 did show strong sequential performance that was placed near the top of the leaderboard.

In our Blackmagic test, the Viper SSD was able to reach 5.13GB/s read and 5.83GB/s write, which places it near the upper part of the Gen4 consumer drive performance spectrum.

While marketed as a premium gaming SSD, The VP4300 does carry a price tag that’s a couple of bucks less than the 980 Pro and SN850. This is a new launch, so pricing will fall some as the drive gets into the channel. Overall though, is this package of pricing and performance enough to warrant serious consideration in a high-performance SSD segment with a couple of fantastic choices already?

Well, if you’re looking for Gen4 SSD with impressive sequential read and write performance, the Patriot VP4300 is certainly a viable choice. At price parity with the 980 Pro (being replaced by the 990 Pro) and SN850, we prefer the latter two options, but this drive is still very strong and a good value for most when it’s 10-15% less expensive than the leaders.